Greenspan, Stagflation And What It Means For Commodities, Gold & Silver

This is the interesting thing regarding Alan Greenspan’s comments about stagflation as well as what it will mean for commodities, gold and silver.

Greenspan & Stagflation
By Michael Oliver, MSA (Momentum Structural Analysis)
August 6 (King World News) – I used to read Alan Greenspan in the late 1960s when he was still a private economic consultant and an unknown in the political/governmental world. He was also part of Ayn Rand’s inner circle—humorously called “the collective”—and contributed several chapters to Rand’s Capitalism: The Unknown Ideal. In his writings he attacked the underlying concepts of government central banks and their real-world consequences. Reagan appointed him as head of the Fed in 1987. Was this rebel going to bring down the system from within? Hardly…

Under Greenspan’s reign the Fed was arguably the sponsor of the dotcom and real estate bubbles. But maybe now, later in life, he’s come full circle. I can’t be sure, but his recent interview with Maria Bartiromo at least yielded this choice quote:

There are pressures obviously emerging for long-term debt to start moving up. It’s (at) an extraordinary low level. And as the inflationary pressures which now seem to be building, we’ve just been through a long period of stagnation, we’re moving now toward what we used to call stagflation. (emphasis by MSA)

MSA called a long-term top in T-Bonds (a low in yield) last October, and we argue that more drop in price/rise in rates is ahead, based on our assessment of annual momentum. So we agree with Greenspan’s rising interest rate outlook. We also see sufficient and increasing positive macro-trend technical evidence in commodities to affirm his fundamental anticipation of inflation.

We think that a factor in this shift towards commodities is not merely the rate rise situation, but a likely shift in investor preferences. Changes in investor preferences always occur. The last such shift took place in 2011 as MSA anticipated that commodities (and emerging markets) were topping, which helped to continue or encourage ongoing investor participation in develop market stocks. An opposite shift occurred in 1977 and 1978 when commodities got their act together, coincident with the onset of several years of malaise in stocks—the famous stagflation period that Greenspan mentioned. The final pin to be pulled is an initial sharp drop and a shaking of confidence in stocks. Such a drop will begin to move investor preferences back to commodities and out of stocks. Of course, it won’t be a wholesale shift at first. It never is. But smarter/cautious money will sense the relative risks and rewards and begin the transition. Only later will it be popular to be out of stocks and into commodities.

Bloomberg Commodity Index Intermediate momentum trend
Momentum shifted to positive several weeks ago, with this past week being a pullback, but one that isn’t technically meaningful. 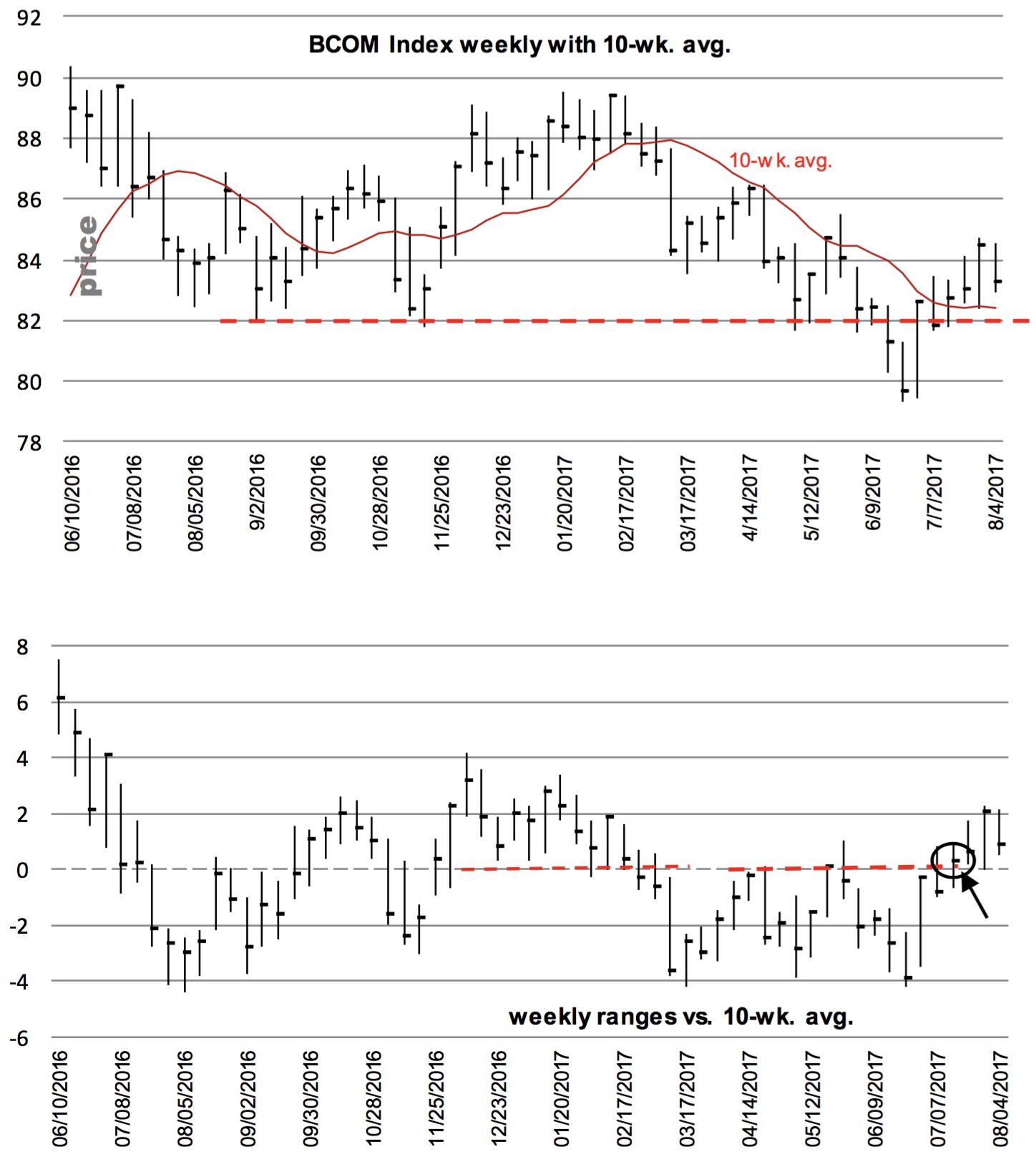 Note the topping action by momentum from November 2016 through February 2017. That topping range was only thirteen-weeks wide. The basing action since then spans over twenty weeks. Often the size of a top or bottom will indicate the potency of subsequent trend shift. We’ll see, but upturn has occurred.

Price chart comment: Notice the repeated floor at 82, red-lined. The index finally blew out that clear price chart feature in June and dropped for two weeks. The subsequent rally has sharply aborted back above that line, meaning the price chart breakout was a bear trap. Stops cleaned out.

Bloomberg Commodity Index annual momentum trend
A recap of the topping action in 2011/2012: it was apparent to MSA that this category as well as associated markets such as emerging markets were topping. The years of outperformance by commodities vs. the S&P500 were ending. 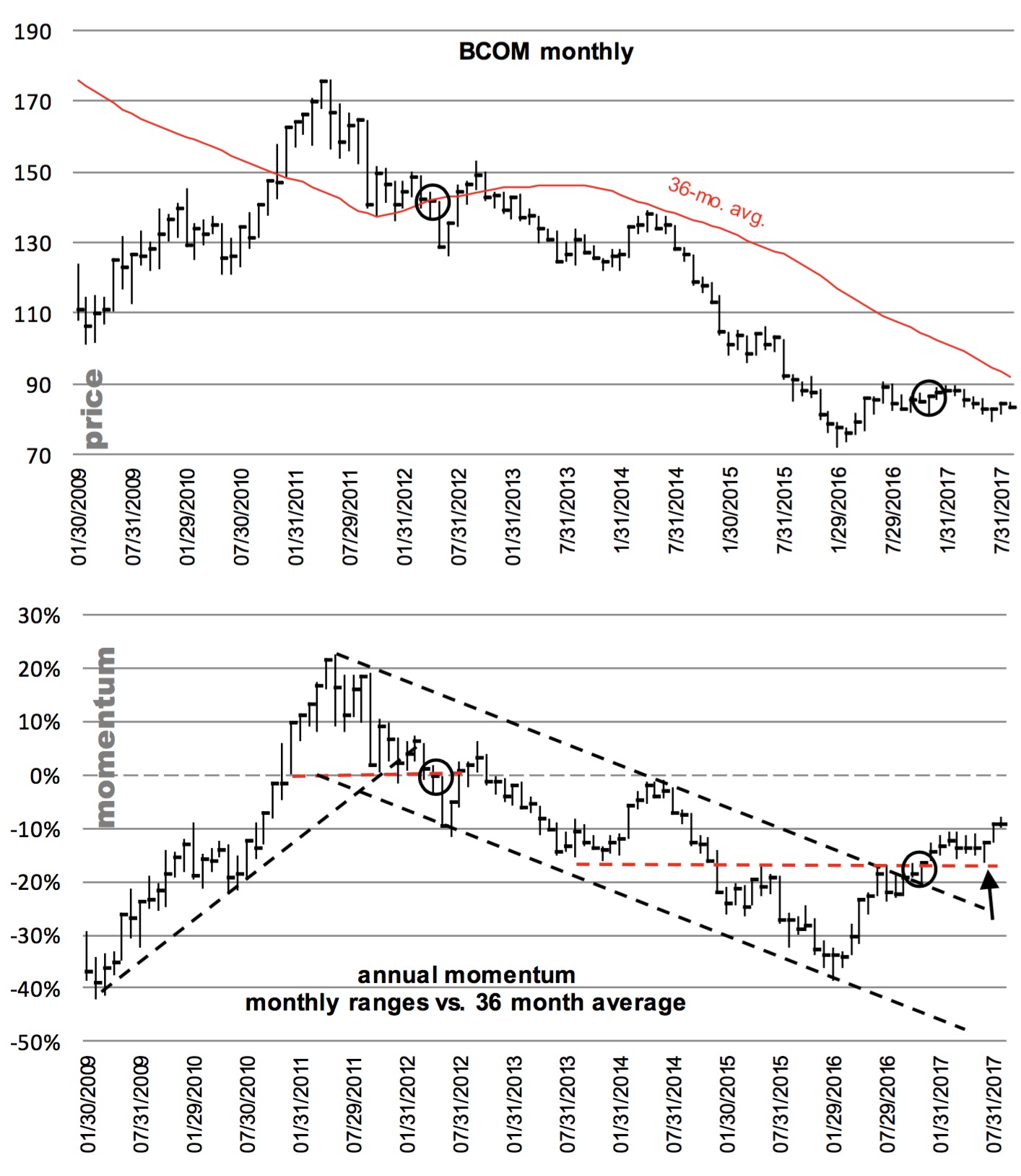 The initial breakage (circled) was sharp, but as often occurs, a dying trend produces a dying gasp—a desperate attempt to reassert itself. Note the sharp spike rally into late summer 2012. It even rose briefly back above the breakage levels on momentum. Then came the multi-year sustained downside.

But all things change. And from our vantage point that began late last year. A multi-year parallel downtrend channel and a horizontal structure were both overcome last year as price moved just above 84 (second circle on momentum notes breakout). A nice shot up to near 90 was next, followed by a retracement a month ago to below 80. Basically a price pullback that caused momentum to sit-back on top of the pivotal red horizontal structure (arrow). Likely support. The recent return to the upside reached 84.68; currently in the 83s. But the main point is that annual momentum is persistent, still quite positive, and still in its early emergent phase of the new bull trend.

But we suspect that an extra spark that will be helpful for this commodity upturn is an initial fracturing of the inhale-only stock market. That’s why if you’re position-building in commodities pay attention to the GOOGL, AMZN, S&P500, and PNQI situations. Their fracturing is likely to put more wind at the back of commodities as investor preferences begin to shift.

***KWN has just released the remarkable KWN audio interview with Egon von Greyerz and you can listen to it by CLICKING HERE OR ON THE IMAGE BELOW.