Gold’s massive triangle is close to a major upside breakout, plus a look at gold priced in foreign currencies.

The Golden Triangle
February 4 (King World News) – Otavio Costa:  Every day that goes by this chart becomes more relevant. Hard to believe the Fed will have much ammo to truly fight inflation with macro imbalances at such historical levels.

My view: I believe gold will breakout and go much higher from here. 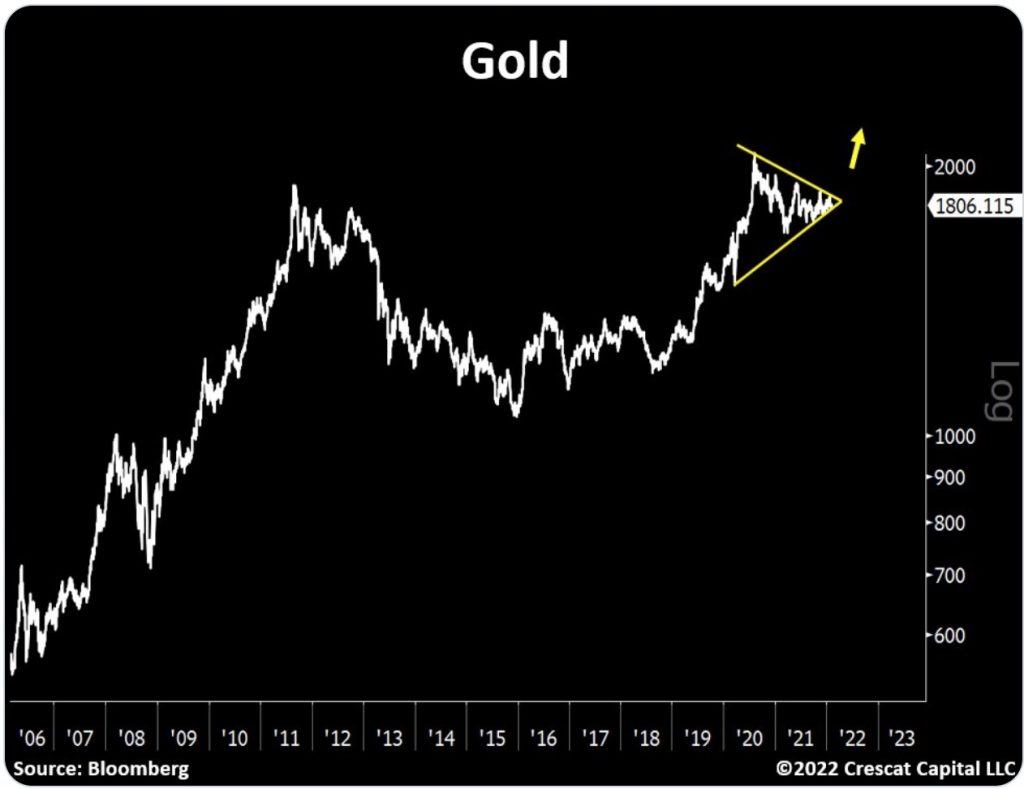 Gold In Major Currencies
Graddy out of Sweden:  Gold in major currencies broke out big in synced fashion back in November. Here we have Gold in Australian dollars putting in a backtest to the blue smaller triangle, after the 2 year yellow triangle breakout. 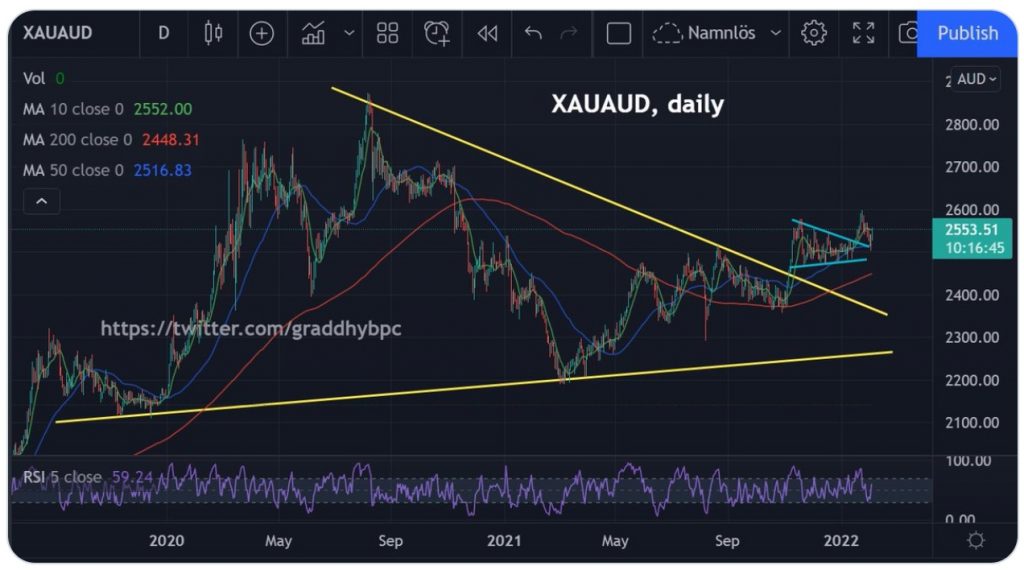 The Great Myth
Garic Moran:  For 2 years my feed said there couldn’t be inflation without velocity: I disagreed. Today every major commodity is in a shortage & prices are soaring. Does anyone know 1 economist (including Hunt & Rosenberg) who admitted they were wrong about velocity? 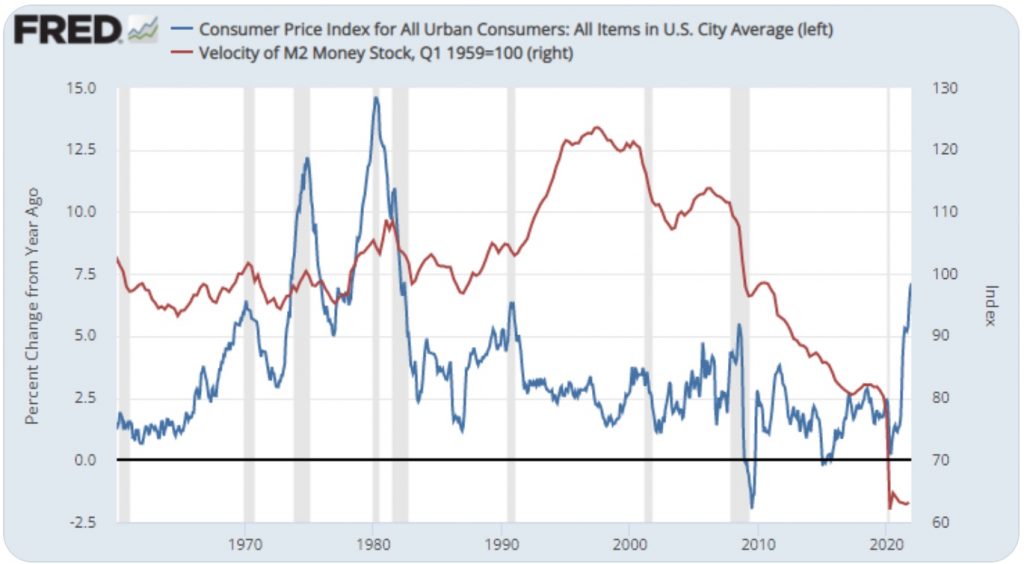 Gold & Silver
Alasdair Macleod:  Gold and silver prices were subdued this week as markets absorbed a Bank Rate increase by the Bank of England to 0.5%, and the ECB held its deposit rate unchanged at minus 0.5%. From last Friday’s close, gold rose $23 to $1813 in early European trade this morning, and silver was up 15 cents at $22.60 on the same timescale. 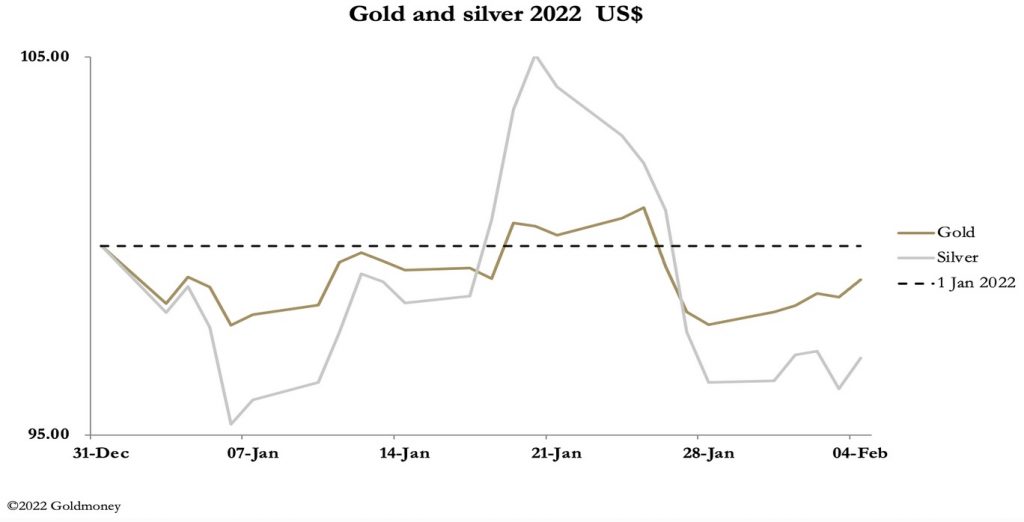 This week, the Bank of England raised its Bank Rate to 0.5%, with some members of the Monetary Policy Committee opting for 0.75%. The ECB announced no change in its deposit rate but warned it would take longer for price inflation in the Eurozone to come back under control than first thought.

Financial markets were shocked by these developments, with equities, bonds and gold initially marked down yesterday (Thursday). But gold quickly stabilised from a near $20 fall, recovering to close only $2 down before rallying further this morning.

Clearly, both central banks and markets are beginning to realise the need to adjust to the consequences of persistent and increasing inflation and the likely impact on interest rates. While exceedingly bearish for bonds and equities along with residential property prices, being driven by Keynesian beliefs the investment establishment has the relationship between gold and interest rates wrong.

Rising Interest Rates
Rising interest rates do not represent the cost of money as commonly thought, and the prospects for further rises therefore have nothing to do with controlling inflation. Even though market participants may not realise it, interest rates reflect the market view of currency debasement, being compensation to holders of a fiat currency for their expectations of the currency’s loss of purchasing power.

The current position is that rising prices are driven by an unprecedented recent expansion of global currencies and credit, in other words debasement. Markets are just beginning to wake up to the potential price effects for consumer prices, and in the coming months will almost certainly conclude that interest rates have much further to rise. That being so, gold also has further to rise priced in debased currencies, just as they have in the past.

Gold’s Technical Position Bullish
The chart below shows gold’s technical position, which is of a contracting triangle consolidation, ready to break out and mirror the move from August 2018 to August 2020 when it rose 79% from $1160 to $2075. On technical analysis grounds alone, this indicates a price target of $1800 X 1.79% = $3,220.

This is not a forecast, just a technical analysis indication of what might be in store as the consequences of past and current monetary debasement affect prices generally. 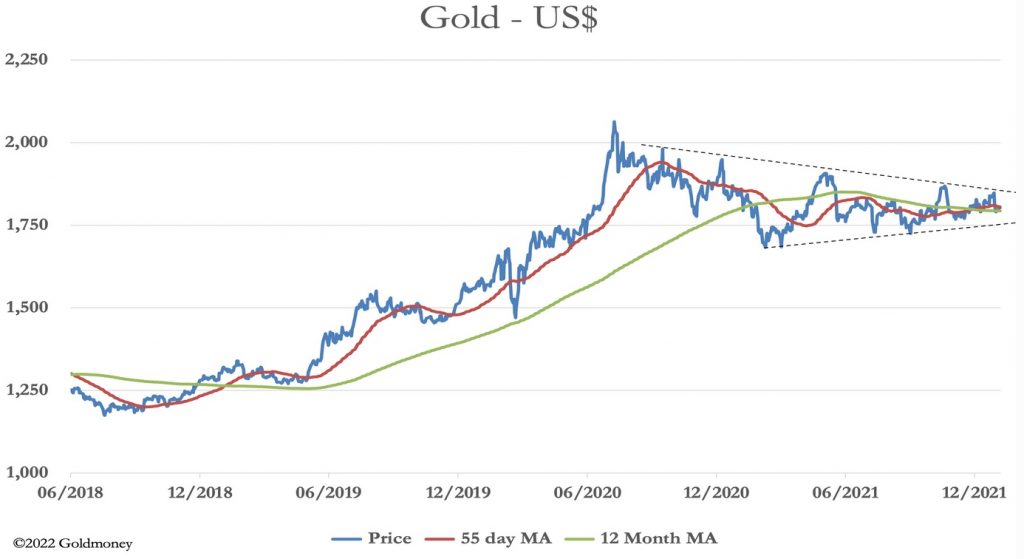