The prices of gold and silver reversed higher as those who expect a better economy plunged to -28%! Plus look at what just hit a 41 year high! 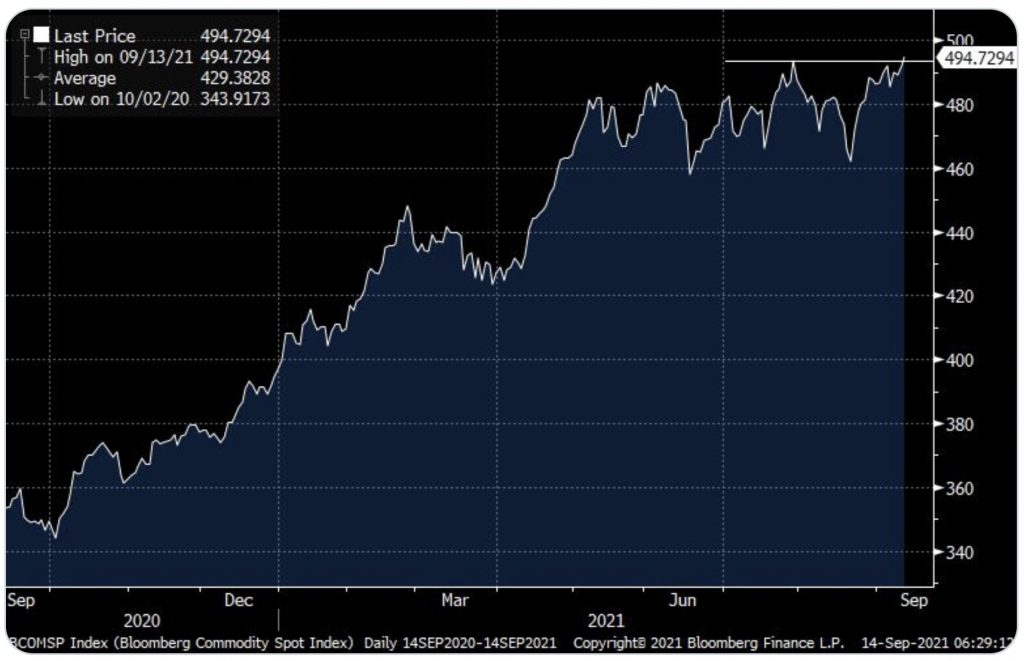 Peter Boockvar:  Ahead of the CPI report today, if you didn’t see yesterday the August NY Fed’s consumer expectations survey where the respondents see one year inflation now reaching 5.2% from 4.8% in July. It was 4% in May. It was 3% in January. Looking out 3 years it is now 4% vs 3.7% in July and 3% in January. I’m spotting a trend here. The NY Fed said “Both increases were broad based across age and income groups.”

We also saw yesterday and continuing today is that the Bloomberg Commodity Spot Index has rallied to a fresh 10 year high. 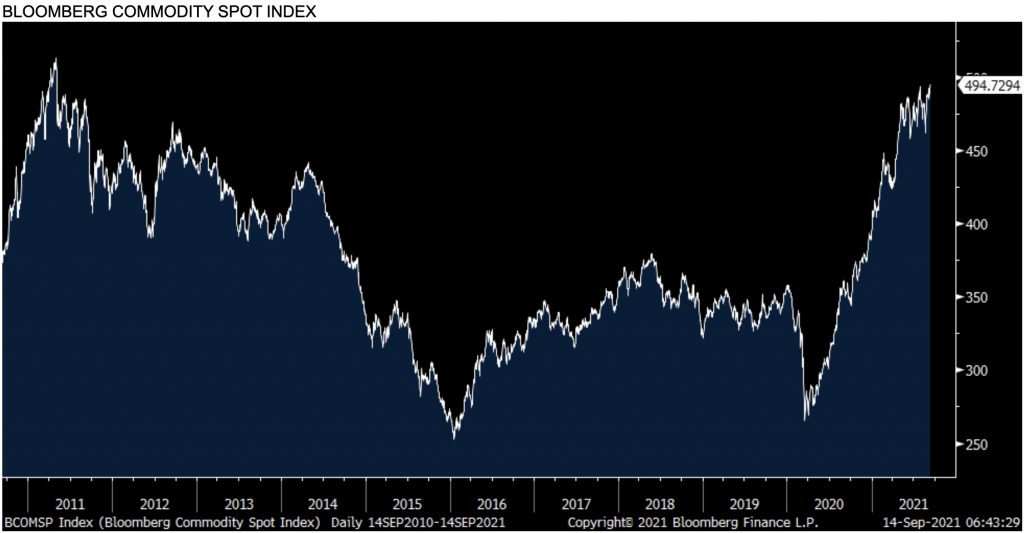 Soaring Shipping Costs
Shifting to the freight story we now all know about and which the WSJ highlighted yesterday, something I’ve been talking about all year when I was refuting the ‘transitory’ argument, talking about the massive consolidation in the container shipping market where 6 companies control 70% of the ocean container freight. In the August Cass Freight Index out yesterday their inferred shipping price index (comparing expenditures vs shipments) said “the average m/o/m increase over the past six months has been 2.5%, with a 15% total increase. For full year 2021, if normal seasonality were to play out, this index would be up 20% from 2020. Outside of mix shifts impacting the m/o/m data patterns, this data series shows broad and material increases in freight rates across modes.”

With respect to the Cass Freight shipments index, it grew 12% y/o/y in August “and should slow to mid single digit growth into year end on tougher comps.” They also said “The recovery after a skid in June and July amid further slowdowns in rail volumes suggests trucking is picking up slack from the railroads, currently snarled by the chassis shortage. But shipment volumes remain limited by the capacity of the freight network, as shown by the backlog of 125 or so containerships at anchor off North American ports.

It sure seems like, I say sarcastically, that the Fed should keep on buying $120b per month and $1.44 Trillion annualized of Treasuries and MBS.

The August NFIB small business optimism index rose a touch to 100.1 from 99.7 in July and vs 102.5 in June. I highlighted last week the labor market components where we saw 48 year record highs in Plans to Hire, Positions Not Able to Fill and Compensation. Well today we see that Higher Selling Prices rose another 3 pts to 49%, a level last seen 41 years ago in 1980. 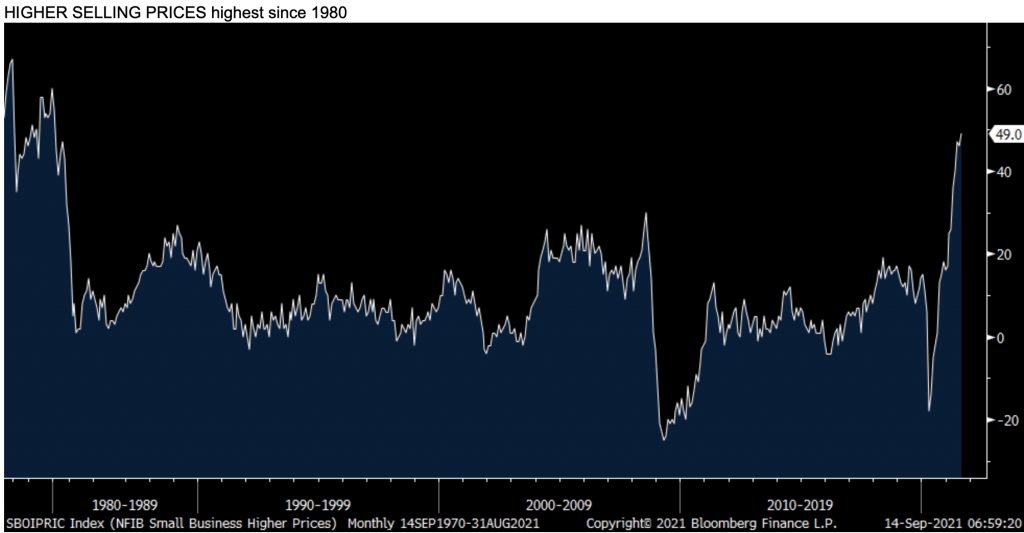 There was an increase in Capital Spending Plans by 4 pts to 30% as companies in the current environment continue to invest in making their operations more efficient. But, those that said it’s a Good Time to Expand fell 3 pts. Also, those that Expect a Better Economy fell another 8 pts to -28%, the most negative since January 2013 and thus well below March 2020 when it printed +5.

Those Who “Expect A Better Economy” Fell To -28%!
The Most Negative Reading Since January 2013! 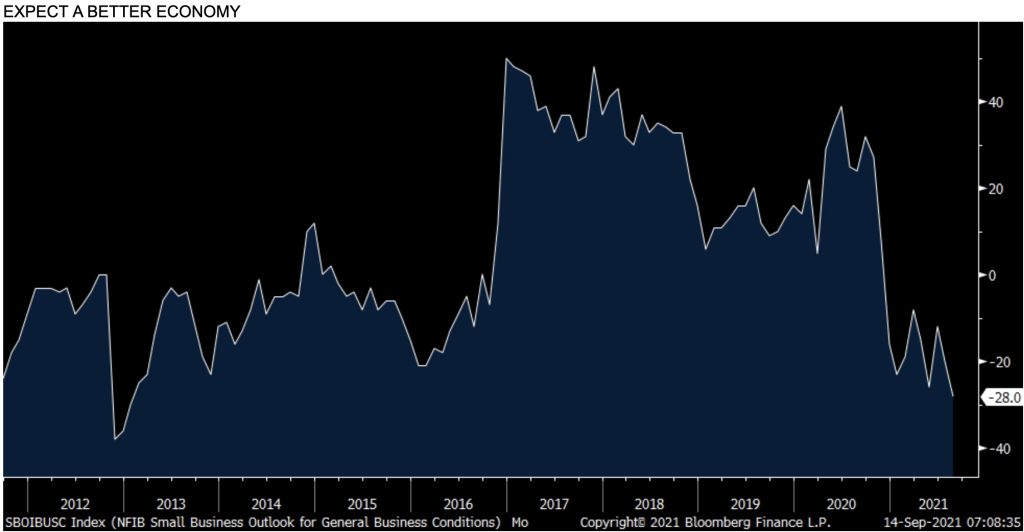 Those that Expect Higher Sales remained below zero but did rise 2 pts to -2. Plans to Increase Inventory got back the drop in August as it seems that every company needs to rebuild inventories.

Small Business Owners Losing Confidence
The NFIB said “As the economy moves into the 4th quarter, small business owners are losing confidence in the strength of future business conditions. The biggest problems facing small employers right now is finding enough labor to meet their demand and for many, managing supply chain disruptions.”

My bottom line, combine the expectations for the economy and the number of firms that want to raise prices and you have a textbook stagflationary economic environment.

1980 Revisited
By the way, in 1980 Ronald Reagan beat Jimmy Carter, the Winter Olympics were in Lake Placid, Kramer vs Kramer won the Academy Award, the Shining was released in theaters, Blondie’s ‘Call Me’ was Billboard’s number 1 single, CNN was officially launched, the Phillies won the World Series, the NY Islanders finally won the Stanley Cup, the Steelers beat the Rams in Super Bowl XIV at the Rose Bowl, the Lakers beat Philly to give Magic his 1st championship and John Lennon was tragically assassinated…

Meanwhile In Europe
Shifting to Europe and mentioning again that inflation right now is global in some fashion, Sweden said its CPI rose .5% m/o/m in August, more than double the .2% estimate with prices up 2.1% y/o/y. The core rate was higher by .3% m/o/m vs the estimate of no change. I mention Sweden because they also have zero interest rates, although they rightly repudiated negative rate policy after the failed Riksbank experiment.

In the UK, they’ve recovered just about all the Covid jobs lost thru July. Employment rose by 183k in the 3 months ended July, just under the 199k estimate. The 4.6% unemployment rate was down one tenth as expected. Also, and a month later in reporting, August jobless claims fell by 59k and continues the trend of sharp declines. It is also good timing that the furlough program is ending in September because there is a record number of job openings too. Wage pressures as a result of all of this continues to intensify with weekly earnings ex bonuses up 6.8% y/o/y for the 3 months ended July but that was as forecasted.

While the numbers were about as expected, further evidence of a tight labor market and rising wages has the 10 yr inflation breakeven in the UK rising to a fresh 13 year high at 3.79%, up 2.5 bps today. The pound is slightly higher and the 10 yr Gilt yield is up by 4 bps. I continue to remain bullish on UK stocks, particularly energy, financials and some REITS.