As the carnage in the gold and silver markets accelerated this week, look at this special report that was just sent to the big money.

Since inception, MSA’s primary goal has been to identify and to time for investors and asset managers three or more major trend changes (i.e. of the 30 to 100% variety) per year. We also attempt—when our metrics are clear—to identify intermediate trend changes in markets. No single methodology is always clear. And any methodology that promises scientific “counts” or metrics or cycles that offer the answer to everything—those should be treated with a large dose of skepticism.

MSA measures price against various time-scales of momentum, to ascertain long-term and shorter-term trend changes. Often, not always, these structures are so clear they smack you in the face, even if price chart action does not. We’ve also found that usually if price scares or excites the public, but there is no significant momentum structure being broken out (above or below), then the price action is noise, and best treated skeptically. We strongly suspect that the current decline in precious metals is just that— noise.

That said, we are confident—based on the record of our search for momentum structure—that we will offer a handful of major trend shifts each year that involve the sort of percentage gains, short or long, that most investors would only expect after three to five years of commitment in the stock market. We also seek to identify intermediate trends that run counter to larger trends—again, only if our metrics are clear. If they are not, we don’t offer hype, but remain silent. And now, with focus on the markets specified above, we will o er reports on the short-term action of certain key markets: gold, oil, S&P500, NDX, T-Bonds, the Euro, and the Dollar Index.

As for gold and silver, fortunately, the short-term action is clear with definable levels above that will indicate a sharp rally and the possible end of the decline of the past few weeks. The same structures we defined the other day, now adjusted with new numbers. It’s a simple matter of monitoring for breakout. The update begins on page five. There is also a set of short-term charts on GDX. 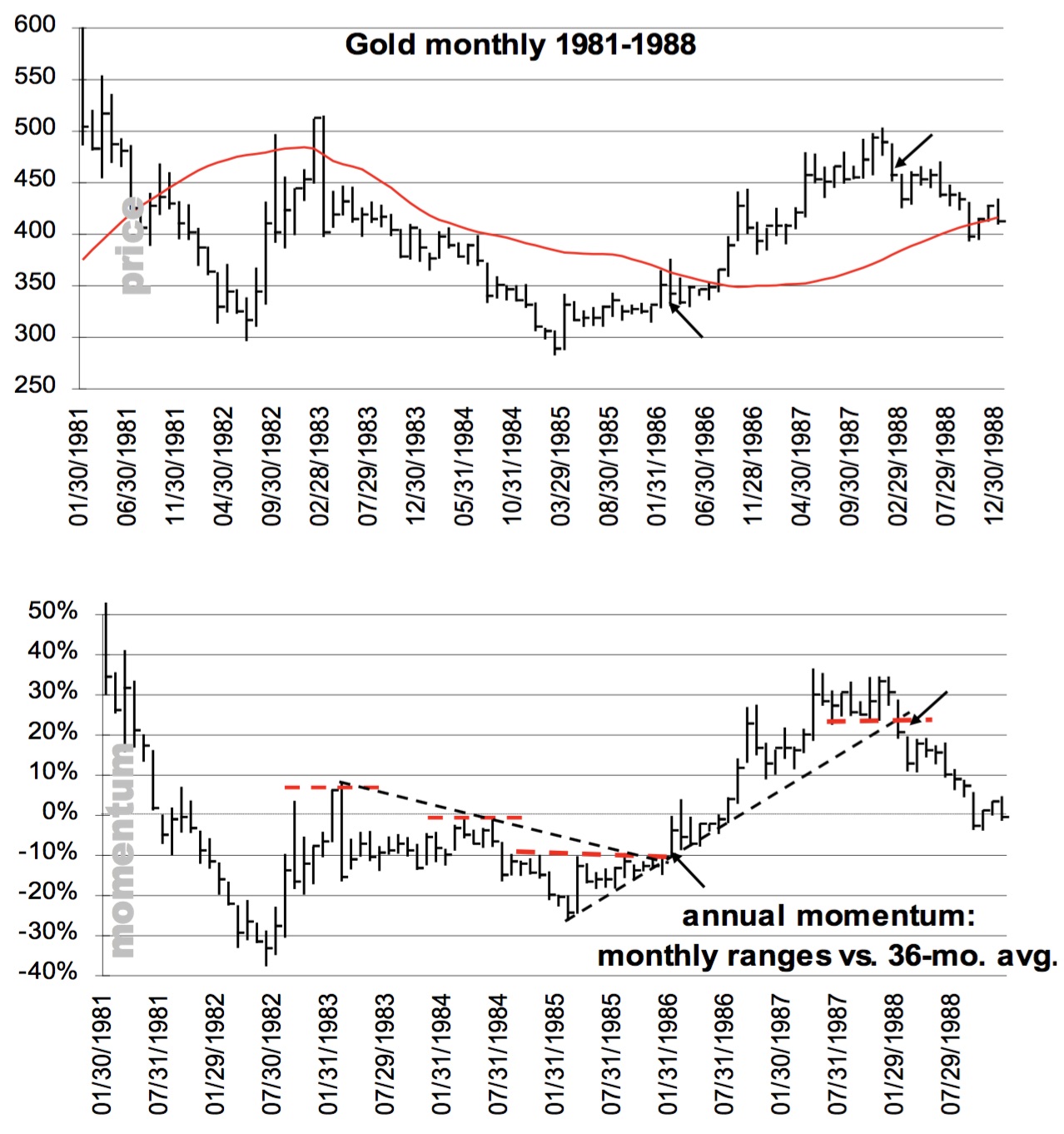 The final bear market low was not achieved until February 1985 near $280. That price low was not confirmed by annual momentum, which made a higher low. In January 1986 there was an upturn in momentum that could be labeled a breakout (over prior resistance). The bull market begins there from an annual momentum perspective, as the third horizontal layer in a sequence of declining layers was broken out above and a downtrend came out. The breakout by momentum (up arrow on the momentum chart) occurred at a price level of $330 (up arrow on price).

The subsequent bull market was a brief one for gold, but it carried to $500 (a 50% advance). The structural downturn in momentum came in January 1988—clear breakage below the prior zigzag low and an uptrend. $460 was the price level that caused momentum to break its structure.

After the original buy level in 1986 and the 1988 exit level, both of which were structurally signaled, there were three counter-trend declines, each of more than 15%. But they weren’t structural shifts in the upward trend, and in hindsight were noise. Annual momentum held an investor in the correct position until the downturn that really counted, at $460 in January 1988.

Archival study 2
Annual momentum signaled a bear market in the summer of 1996 (arrow at the upper red horizontal). The price of breakage was around $390. That bear market lasted until late 1999, reaching almost $250. In the decline, there were three counter-trend rallies, each involving at least 10% of upside by gold. No doubt stopping out shorts with each rally. 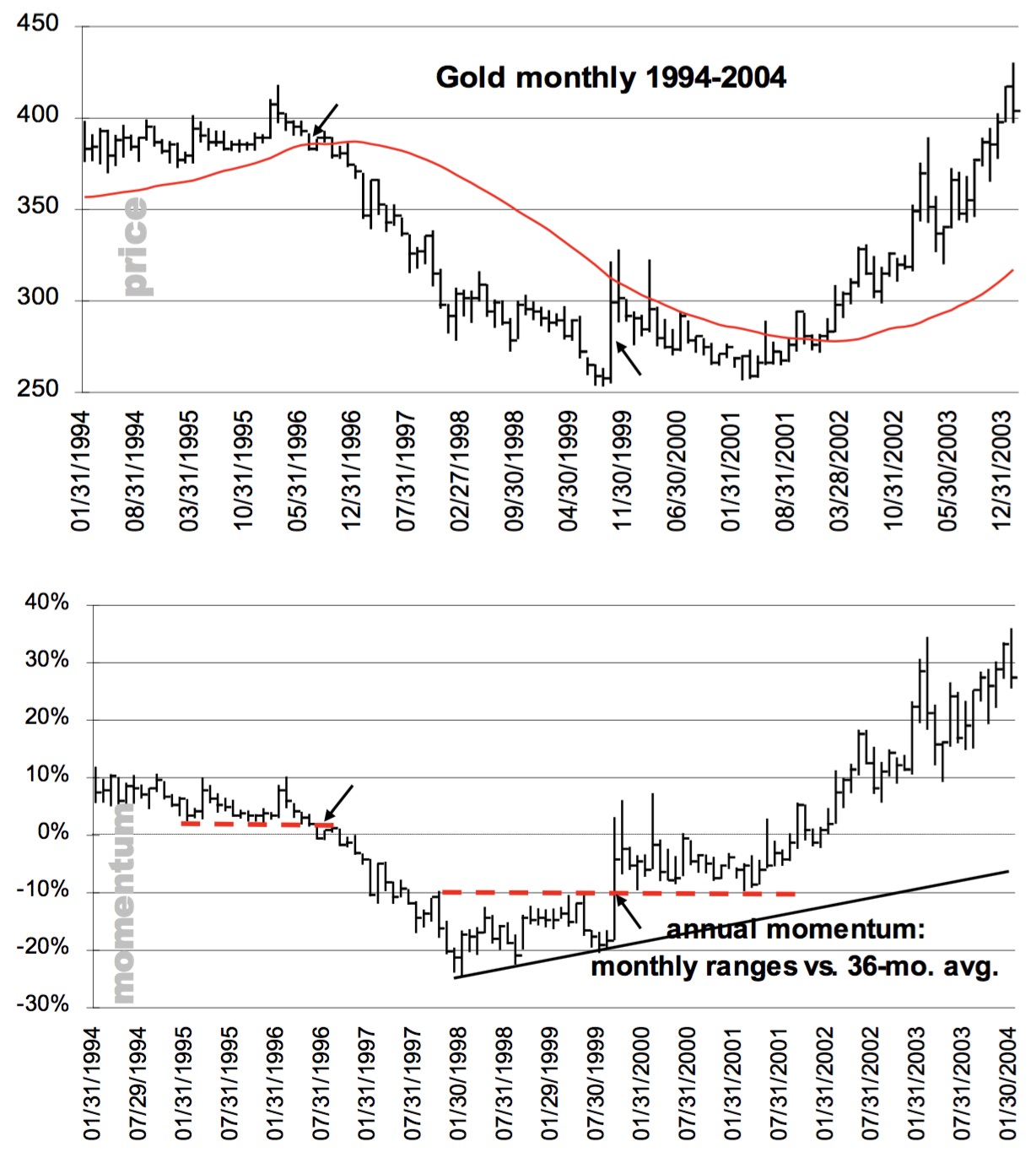 Only in September 1999 was there a “structural” breakout by momentum (arrow at lower red horizontal). Price was then $278.

This new bull market would last until 2008 and exceed $1000. Many counter-trend moves would occur involving declines of double-digit percentages for price, including the sharp pullback that followed the initial post-breakout surge in late 1999. That decline even dropped slightly back below the original buy point for price, though momentum held precisely on top of its prior breakout shelf. It took months for the bull to genuinely engage, but after many false and noisy downside efforts, annual momentum paid off and price engaged with speed.

We could include other studies going back to 1975 (when gold was legalized), but these first two demonstrate the template of trend change as seen by annual momentum. The current annual momentum situation is on the next page.

Current annual momentum
The bear market was structurally signaled in January 2012 (arrow at upper red line). Price was then at $1660. Confusion-filled rallies followed for the rest of the year, each involving 10% or more on the upside from low to high. Then in early 2013 the bear unleashed after having teased and confused both sides for a year. 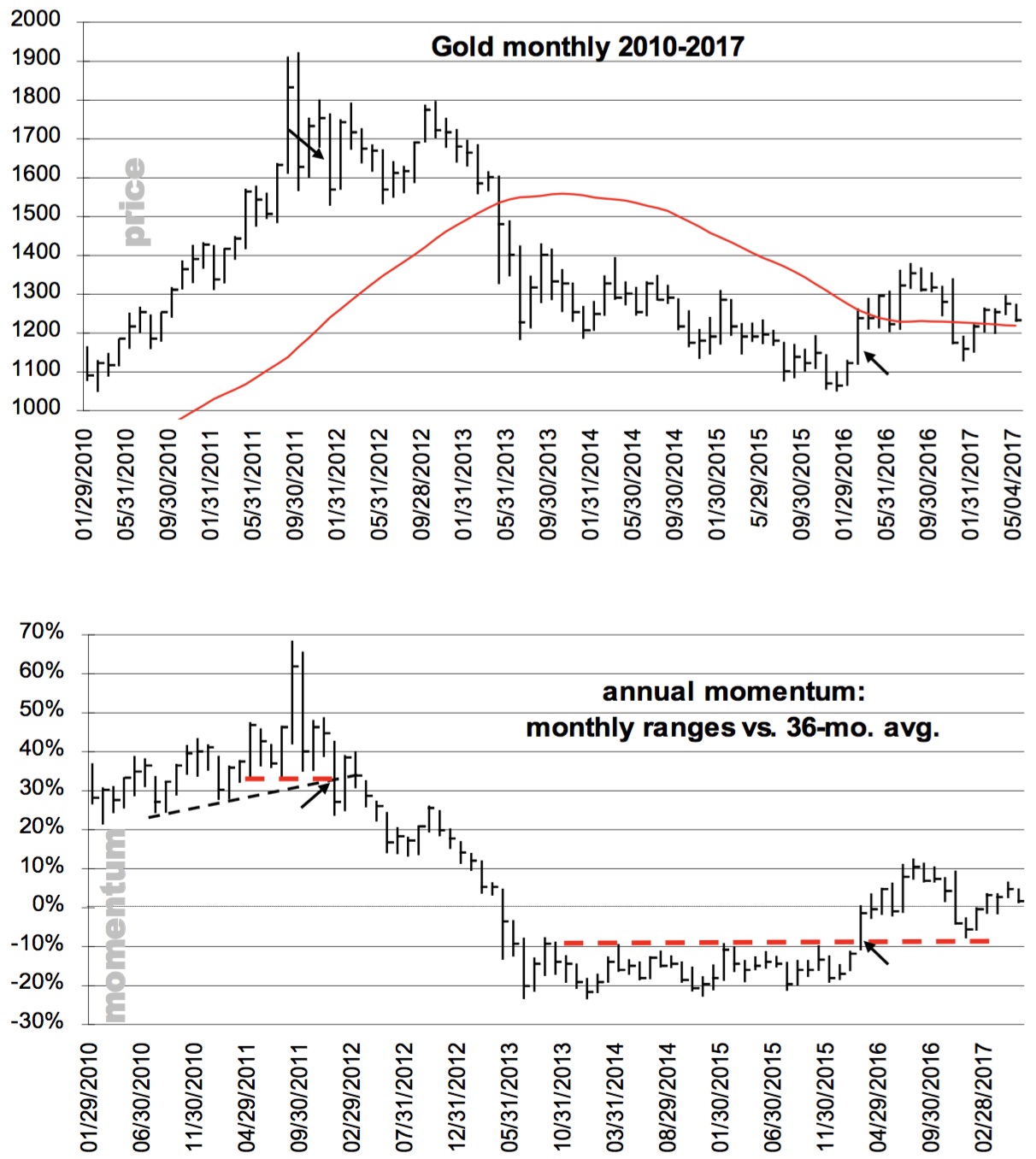 The bull market was structurally signaled in February 2016 as price moved up through $1157 (other long-term indicators engaged between $1140 and $1160). The initial thrust carried to $1370, followed by a 10.7% drop into December 2016. The recent upturn drove to a $1294 high in April, followed so far by a 5.3% pullback. This picture remains bullish for annual momentum.

Most if not all trend changes on annual momentum involve two features. The first is sufficient structural development to set up trend change the other way. Such as a rising set of lows on momentum in a bull trend, which later establishes a trend line to be broken once the bull has run its course. Or a horizontal floor is developed by downside moves in momentum, such as occurred in 2011 before the 2012 breakage.

Secondly, a bull trend usually doesn’t end until the annual average (36-mo. or 3-yr.) has risen, often sharply, and for some time. The 36-mo. avg. is now at after its lengthy decline, and the 3-yr. avg. for this year declined slightly from last year. Even in the brief bull trend of 1986 to 1988 (archival study 1), the 36-mo. avg. was rising fairly steeply and had been for a full year before the trend topped.

Can this time be different? Certainly. But over much time we’ve witnessed and measured the momentum action, and in the case of annual momentum trends these two features are almost always a precursor to any possibility of a major trend change the other way.

What we’re witnessing now, in MSA’s view, is noise, but within the context of a positive annual momentum situation. Sometimes major trends require some time for “debate” or arm wrestling between the losing side (in this case the prior bears) and the winning side (the emergent bulls who are obviously still in a state of bullish doubt).

Gold: short term
Daily price with several daily momentum charts, each with its own information.

3-day avg. oscillator (middle) has had oversold readings for two days now as the upper band drops below the zero line. A similar but reverse situation was the overbought status in mid- April as the lower band pressed above the zero line for a few days, with price still driving north. Finally resolved with downside. 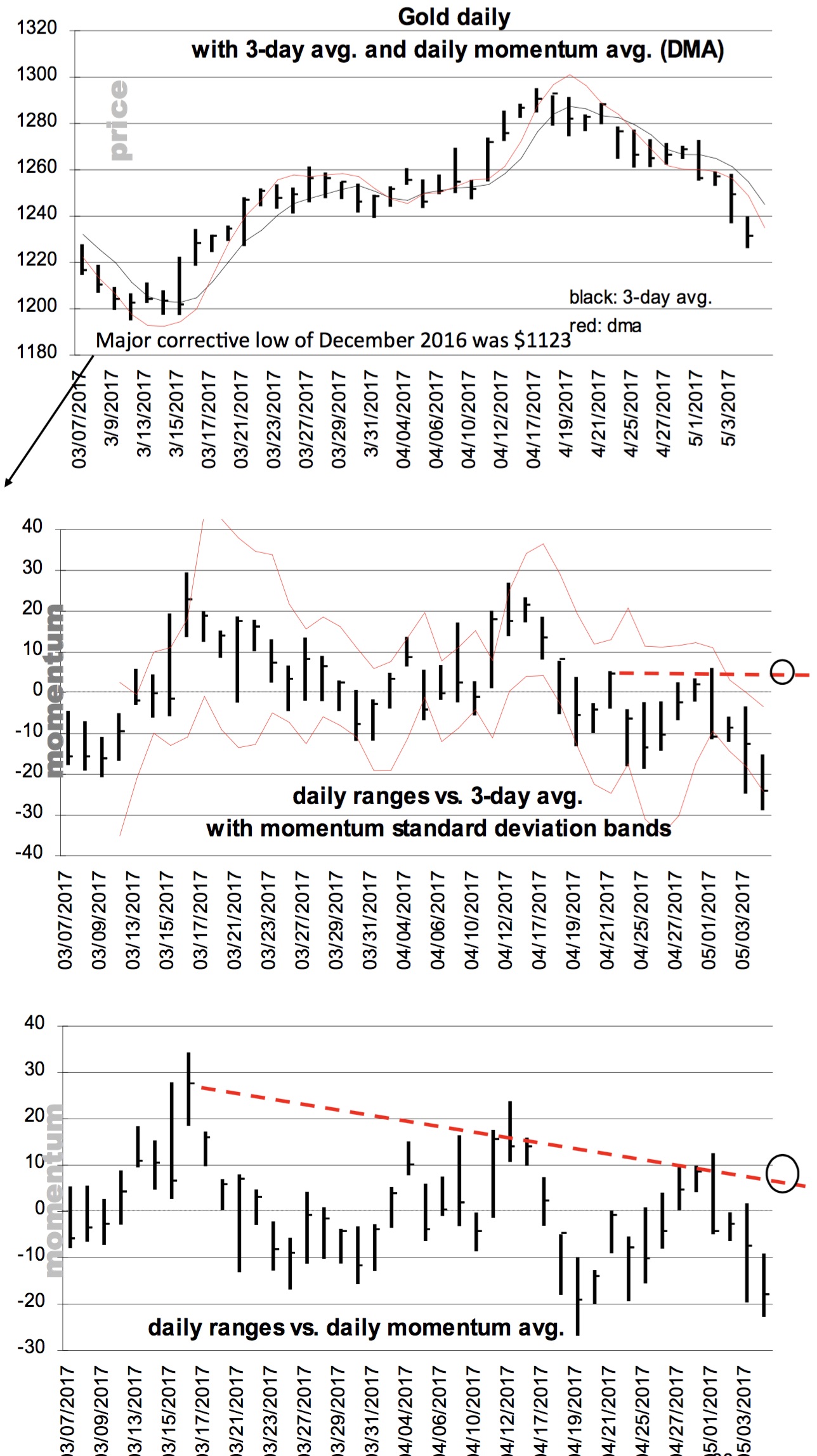 The structure on 3-day (red lined) consists of two closes marginally over zero line. Tomorrow would need to close around $1249 to clear that line, but on Monday a close around $1240 would break out.

Daily momentum avg. (DMA) oscillator has a three-point downtrend structure. A close over it signals the end of the short-term decline. Tomorrow would need to close at $1243; Monday $1240.

1-day avg. momentum (below) has its uses, despite its very short-term nature. Seldom does this oscillator develop clear structure, but when it does, pay attention. There’s been a staircase decline since the peak reading at +20 in mid-April. The most recent layer is defined by the red horizontal. A trade over it will be an early hint of a likely turn. To trade over the line tomorrow requires $1238; Monday around the same level (estimated). 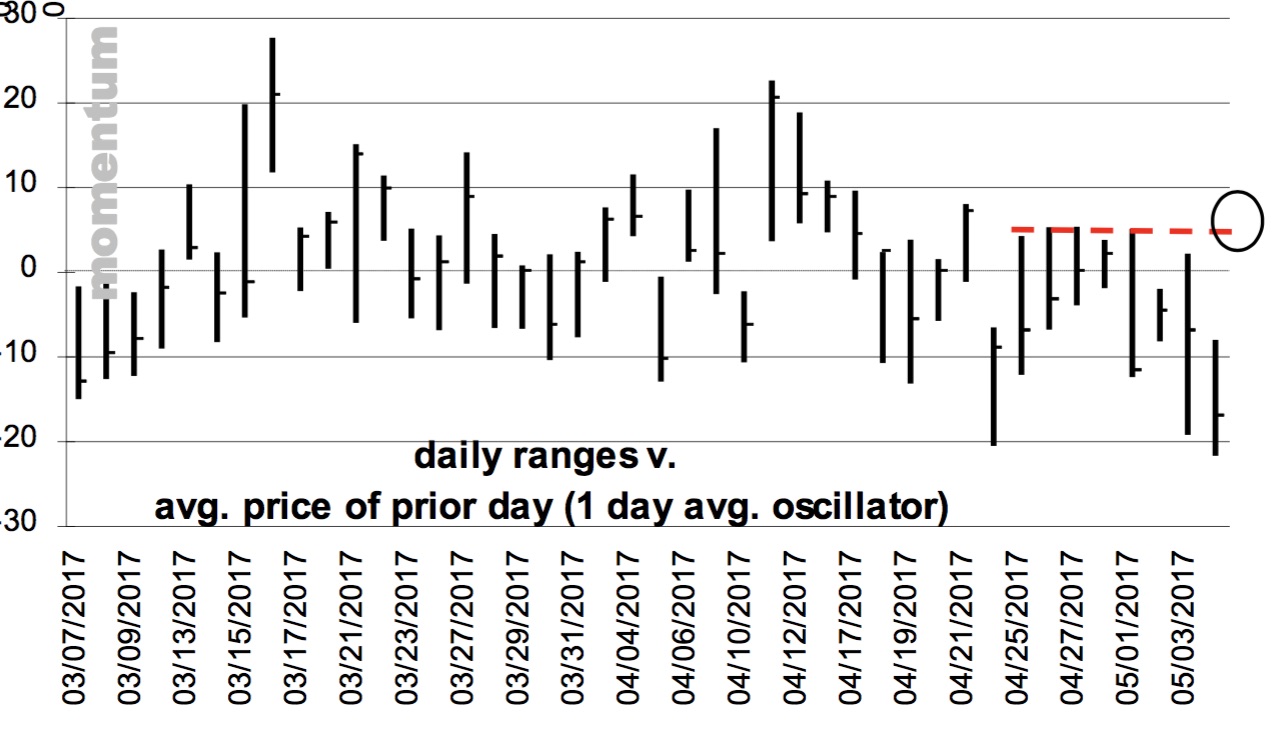 The daily or short-term trend remains negative until these indicators can shift trend. Numbers are dropping rapidly and aren’t far above current levels. Aside from the oversold status, there’s also now considerable age in this daily downtrend. MSA is focused on the positive trigger numbers and will update.

Silver: short term
Oversold now for four days, but not a sign of upturn, yet. The key level for the middle chart is the range of readings of the past thirteen days, all submerged below the 3-day avg. To close over that average/zero line tomorrow requires $16.60 (estimated); Monday around $16.45, breakout number drops sharply each day. 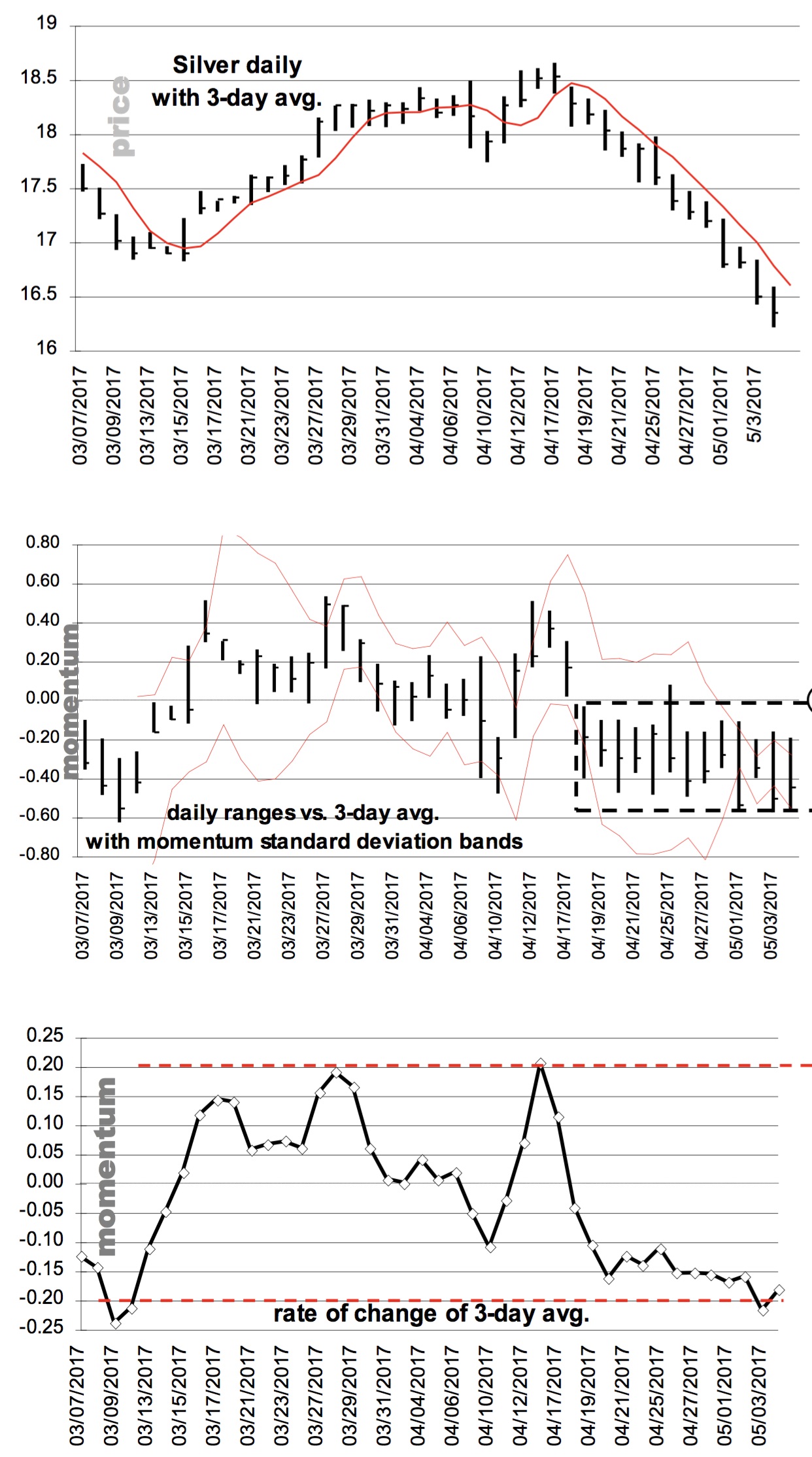 The bottom chart is fairly simple. It measures the change, day to day, in the 3-day avg. Note that readings tend to run out of gas around +.20 or -.20 (twenty cents per ounce). Despite lower lows in price today, the rate of change chart is up-ticking.

GDX weekly momentum (short-term)
The price chart low of mid-March has now been taken out due to trading to $21 today. No doubt sell stops are being run. 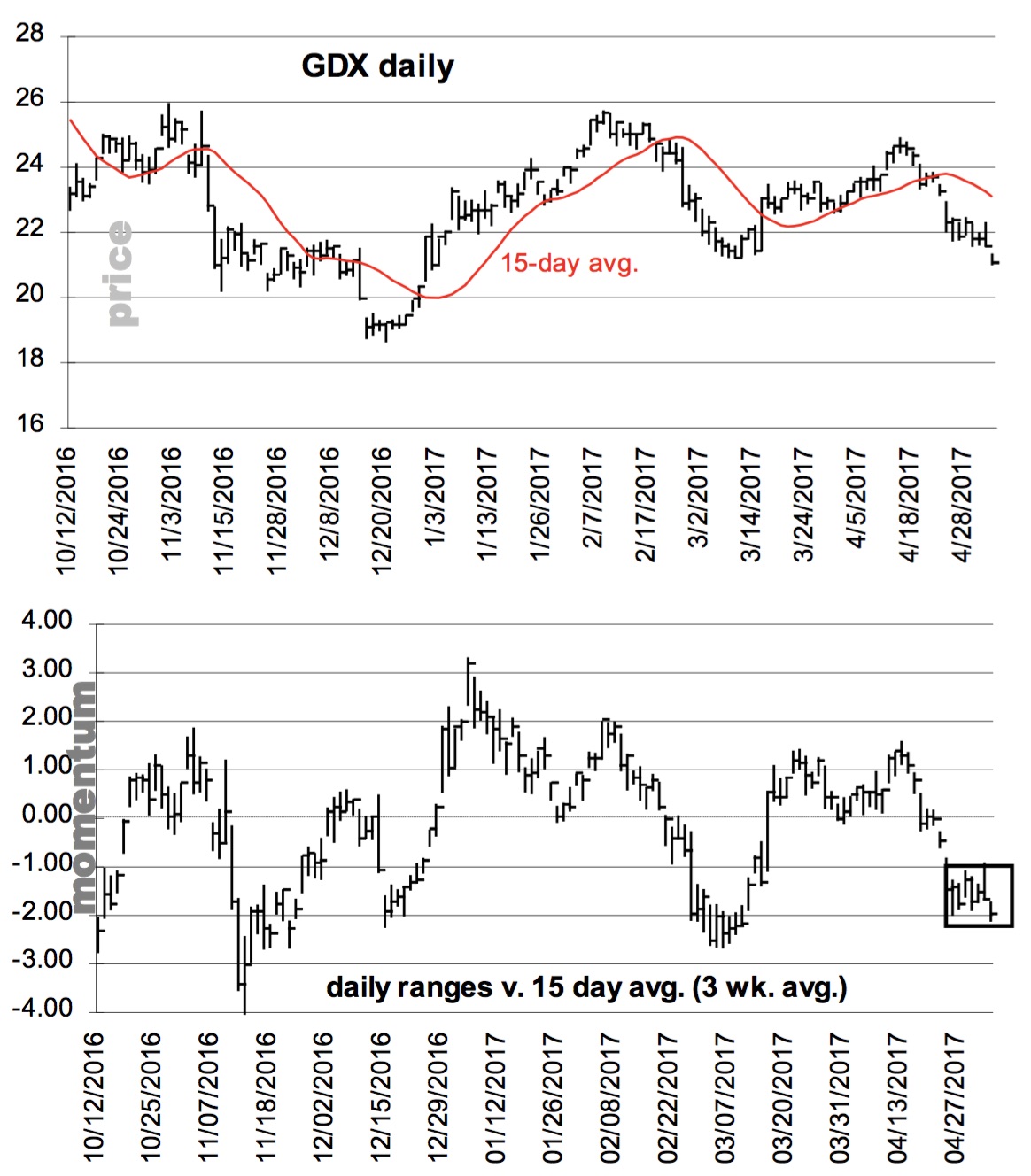 Weekly momentum, in contrast, is not at or below the mid-March low. The key feature MSA is watching for sign of an upturn is any momentum action that closes out above the past eight days of readings (clump of ink). To do so tomorrow would require a close at 21.85; Monday 21.60. It’s not a major structural turn, but any turn now from a non-confirmed low is likely meaningful, especially if gold and silver are also rendering short-term upside signals.

Summary
The situation with the precious metals is once again down, but it remains in our view a “down” within a larger positive trend context (page 4). At the December lows of 2016 MSA was quite specific as to a number we did not want to see for gold (did not want it to trade $1119.40; and so that major correction halted at $1123). In other words we were con dent in a momentum level holding, and if violated it would have altered out long-term trend view. Instead, gold held our momentum based level and within months was pressing back up near $1300.

However, we are not now so clear as to support levels, or at least any that are nearby. Based on some lesser factors we thought that $1250 area might be the worst of this decline, and we were wrong. But that was largely a price-based level and not attached to any major momentum levels. While we can define some levels on momentum, such as a monthly close this month at $1244 or lower (see weekend report) that level is only of moderate confidence on our part. That number, though it might have some validity as a negative if closed below at month-end, is not destructive of the long-term trend factors (again see page 4). Therefore MSA is not in a position to define with confidence any nearby levels that must or will hold. The major test of critical support occurred in December. Current price swings are occurring in a zone that is of little technical significance to major momentum technical factors. ****Today King World News will be releasing an interview with London metals trader Andrew Maguire covering the recent carnage in the gold and silver markets. 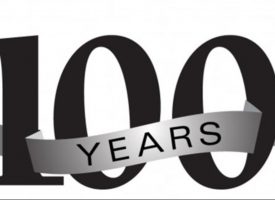