The gold and silver bull markets are alive and well, plus a look at the latest propaganda and inflation.

Gold & Silver Bull Market Alive And Well
January 11 (King World News) – Graddhy out of Sweden:  The precious metals bull market is very much very alive. We are just experiencing a rough, drawn out consolidation, nothing more. This is not the first one and it will not be the last one. The bigger picture is as bullish as it can be really. We should never forget that with precious metals, we are placing a bet against the FIAT monetary system for the whole planet…

Fed Propaganda
Peter Boockvar:  Jay Powell’s reappointment testimony is basically a defense of his stewardship as chair over the past four years. He also does tell the American people that he feels their inflation pain. After presiding over a shift in inflation policy to allow a period of higher than 2% inflation to offset a period of below, then arguing that when it was finally here that it was just base effects and transitory and contributing to this current bout of high inflation via an excessive period of cheap money that sharply induced an increase in demand specifically for housing and auto’s and helped to finance about $5 Trillion of government spending in less than a year, “We know that high inflation exacts a toll, particularly for those less able to meet the higher costs of essentials like food, housing, and transportation.” But no need for concern as “We will use our tools to support the economy and a strong labor market and to prevent higher inflation from becoming entrenched.”

Non voting member Raphael Bostic today in an interview with Bloomberg said “We are ready to act to make sure inflation does not run away from us. That is the most important message that people should hear when they hear me or any of my colleagues talk. We are paying close attention and we are going to do all that we need to make sure that the economy stays in a good place.” Bostic also said he had 3 hikes in 2022 in his forecast at the December FOMC meeting and someone who leans more hawkish relative to his colleagues.

Now that we are hearing tougher talk from Fed members and we’re debating whether they hike 3-4 times this year after ending a massive QE program, keep in mind that when Alan Greenspan was hiking rates in 2004 thru 2006, he did it by 25 bps at each of the 8 meetings per year in what he called a “measured pace.” Tough talk is thus all relative here.

Yesterday the NY Fed’s consumer expectations survey for December reflected no change in inflation expectations but still at high levels of 6% and 4% for both median one year and three year forecasts. Specifically, expectations for rent and medical care price increases remained unchanged with November at 10% and 9.6% respectively. They fell for gasoline, food and the cost of college.

Helping to mitigate the inflation worries however was “the median expected growth in household income increased by .2 percentage point to 3.4% in December, a new series high. The increase was most pronounced for respondents with no more than a high school diploma.” But, the 3.4% is obviously well below the 6% inflation expectations.

Rate Hikes
The possibility of a 4th rate hike this year is now seen in the 2 yr yield which is up another 2 bps after rising by 3 yesterday. It’s now up 19 bps in 7 trading days. Every sell side bank is certainly throwing out their Fed tightening expectations but we all know so much will depend on the extent to which the Fed tolerates the tightening of financial conditions which is inevitable and a direct impact from the monetary tightening. 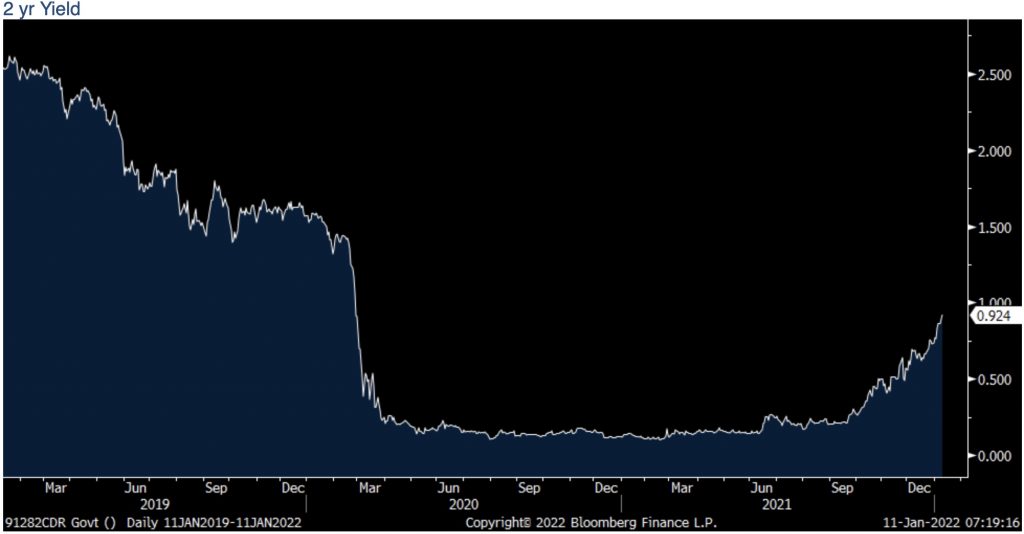 Inflation
Inflation remains the key theme in today’s December NFIB small business optimism index which rose .5 pt m/o/m to 98.9 and compares with the 6 month average of 99.1. Those expecting Higher Prices did fall 2 pts to 57 but off the highest level since 1979 and the current Compensation component rose to a fresh record at 48, up 4 pts. For perspective, since 1984 when this question was first asked, it’s averaged 22. 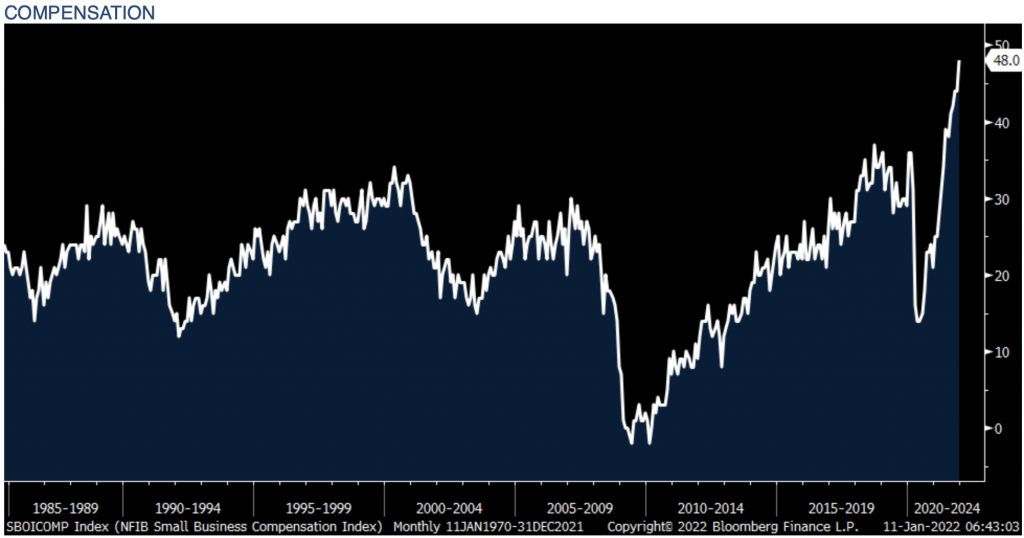 Compensation plans held at its record high. Plans to Hire bounced by 3 pts and is back above its 6 month average while Positions Not Able to Fill was up 1 pt to within 2 pts off a record high. After falling by 4 pts last month, capital spending plans rose 2 pts and those that plan to increase inventory fell 2 pts after rising by a like amount in November. Off a record low dating back to 1974, those that Expect a Better Economy rose 3 pts to -35.

Those Expecting A Better Economy Near All-Time Lows 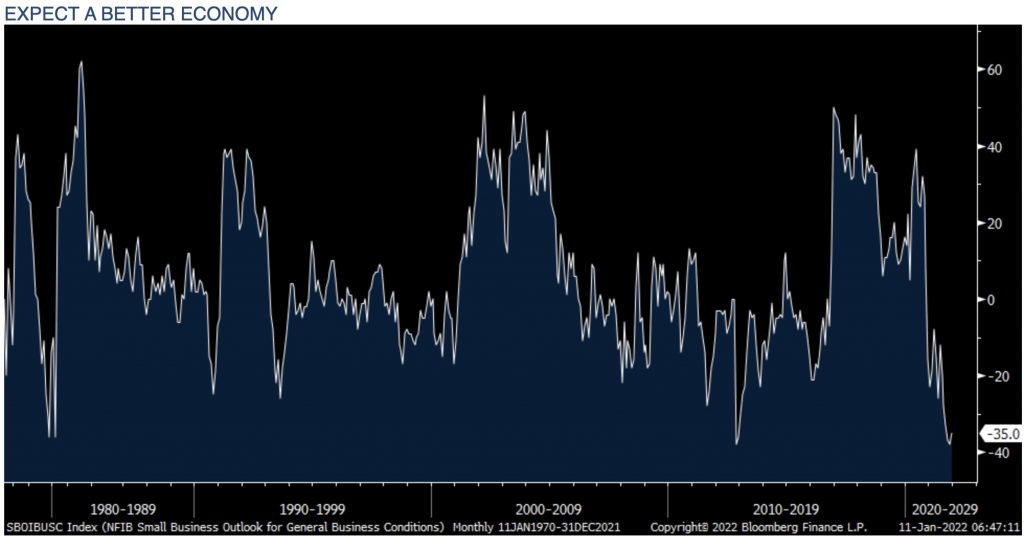 …and those that Expect Higher Sales was up 1 pt. Those that said it’s a Good Time to Expand was also up 1 pt while the earnings outlook improved by 3 pts.

This was the NFIB’s bottom line:

“Small businesses unfortunately saw a disappointing jobs report, with staffing issues continuing to impact their ability to be fully productive. Inflation is at the highest level since the 1980’s and is having an overwhelming impact on owners’ ability to manage their businesses.”

“22% percent report inflation as the single most important problem operating their business, a 20 pt increase from the beginning of 2021 and the highest level since Q4 1981.”

Germany And Inflation
Trying to establish cred on a tough German stance on inflation, the new head of the Bundesbank Joachim Nagel said today “For confidence, it’s particularly important that monetary policy focuses on the goal of price stability. Central banks should therefore maintain their independence and interpret their mandate narrowly…It’s true that prices could rise less than estimated in projections. However, I currently see a greater risk that inflation rates could remain elevated for longer than currently expected. In any case, monetary policy must be on guard.” Yes, the ECB has quite the challenge getting out of the steep easing hole they are in as they deal with inflation but because their QE was so large over the years, European governments have become HIGHLY dependent on it in terms of financing their debts and deficits. Weaning them off will be its own huge challenge.

ECB Propaganda
Lagarde also spoke today and we know she’s a full fledged member of team transitory. As reality has made that tough, she said this today, “We understand that rising prices are a concern for many people, and we take that concern very seriously. But people can trust that our commitment to price stability is unwavering, which is critical for the firm anchoring of inflation expectations and for confidence in the currency.” This as their deposit rate is at -.50% and she has said they won’t be raising rates until 2023.

Meanwhile In Japan
Even in Japan we’re seeing a rise in inflation expectations. According to a Bank of Japan quarterly survey, one year household inflation expectations are 5%, the most in 13 years. They likely won’t get to 5% but the trajectory of the expectations is what is noteworthy. The percent of households that expect higher inflation a year from now totaled 78.8%, up from 68.2% in September and that is the highest percentage in two years. A higher percentage also expects inflation to rise over a 5 yr time frame.

Reflecting the technical behavior of yesterday’s bounce, here’s a chart of the NASDAQ that temporarily broke its 200 day moving average and where buying that dip became evident.

Bulls Buy The Dip Which Has Worked So Many
Times Over The Years. We’ll See If It Works
In Higher Interest Rate Environment 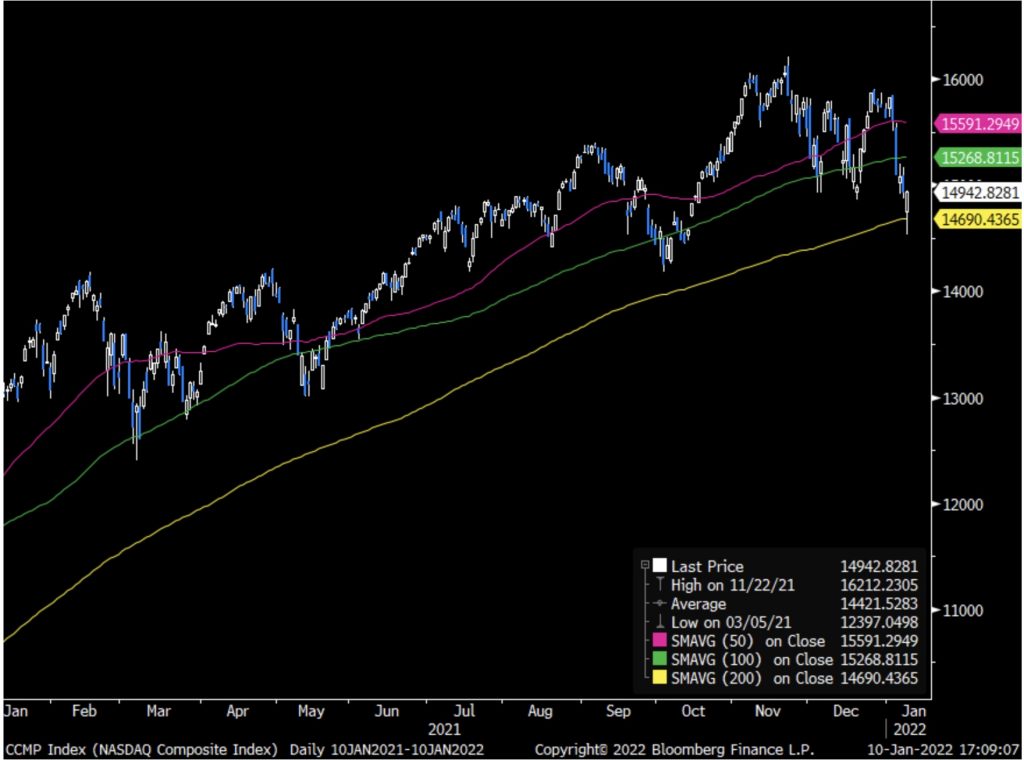 LOOK AT HIS PRICE TARGET: James Turk – The Real Short Squeeze In Gold Is Now Underway, Plus A Look At A Serious Collapse