As we approach the final month of 2019, the gold market needs a December surprise.

Gold
November 26 (King World News) – Ole Hansen, Head of Commodity Strategy at Saxo Bank:  “Gold remains stuck in a 30-dollar range within a wider 80 dollar down channel from the September peak. Investment and safe-haven metals led by gold are currently struggling to find a gear as the prospect for a growth stabilizing phase one trade deal continues to rumble…

The market has taken note of the big drop in China’s gold imports in October to 34.9 tons from 61.7 tons in September. That’s the lowest figure in data going back to January 2017 and it comes at a time where Indian demand is also showing signs of weakness. Several reasons for the slowdown, such as the economic slowdown, changing demographics and in India an improved banking system has been mentioned. However, at this stage we believe that potential buyers are balking at entering the market with prices at the highest level since early 2013.

With physical demand slowing it remains up to central banks and “paper” investors to provide the support needed for prices to move higher. We believe that central bank buying is likely to continue at a steady pace with some even eying a potential return of European Central Banks to the buy side. Despite the current price weakness holdings in Exchange-traded Funds backed by bullion has risen for the past five days.

Most importantly however are the decisions being taken by real and leveraged fund managers over the coming weeks and months. Some have already booked profit in response to the ongoing rally in U.S. stocks and the bond reversal. We maintain the view that the upside potential remains but that end of year profit taking leaves the market exposed to a potential deeper correction than the one already witnessed.

The outlook for gold remains in our opinion constructive above $1380/oz with the prospect for further upside emerging into 2020. This belief is based on the following assumptions:

As per the chart below gold is currently challenging support at $1448/oz with a break raising the risk of a deeper correction towards $1415/oz, the 50% retracement of the June to September rally. Momentum buyers have scaled back exposure and are likely to sit on the fence until the market breaks above the recent peaks, either $1479/oz or even $1516/oz. 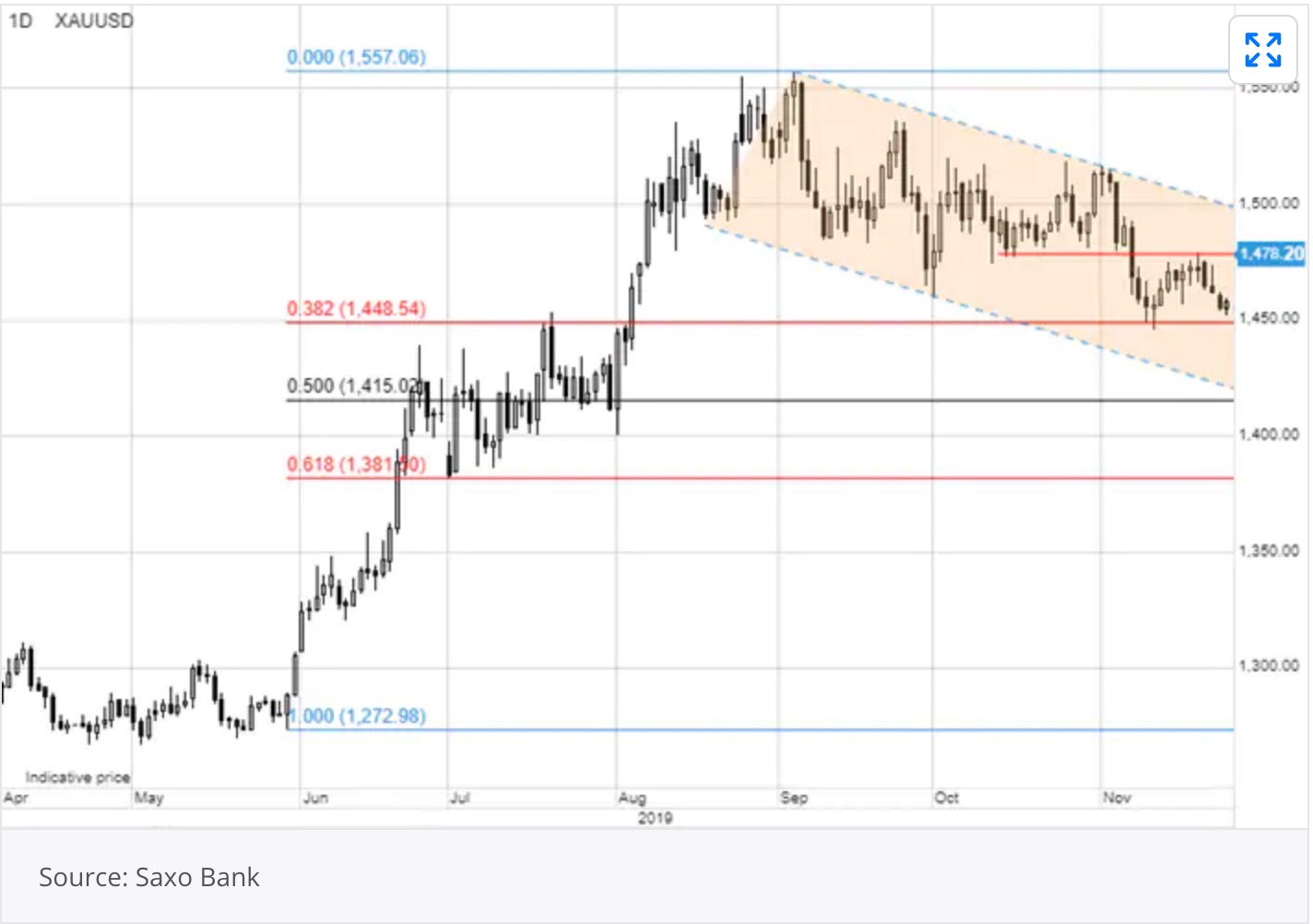 Summary:
Gold remains stuck in a 30-dollar range with investment and safe-haven demand slowing. This as the prospect for a growth stabilizing phase one trade deal continues to rumble. We maintain our bullish 2020 outlook while also seeing a short-term risk of a deeper correction.

Expect Big Move In Stocks
READ THIS NEXT! Expect A Big Move In The Stock Market CLICK HERE TO READ.