Gold Has Been In A Strong Consolidation, But Here Are Some Really Big Surprises

Global markets have seen some wild trading recently and gold has been in a strong consolidation, but here are some really big surprises.

September 22 (King World News) – Peter Boockvar:  Today…there is a hearing before the House Financial Services Committee titled “Oversight of the Treasury Department’s and Federal Reserve’s Pandemic Response.” If there was any doubt, these two agencies are now hand and glove with the latter financing the profligacy of the former. I believe the key factor in the US dollar weakness this year and the lack of any notable flight to safety to it in the heart of the economic shutdown in March and April is because of the exploding budget deficits and debts. Here is a chart of the dollar index in white and budget deficit as a % of GDP in orange. The question thus for the dollar is whether the deficits shrink or the dollar eventually catches up.

ANOTHER GOLD BULL CATALYST:
US Dollar Index (White) May Collapse Toward Budget
Deficit As A Percentage Of GDP (Orange)

“In his press conference Wednesday, Mr. Powell repeated his lecture to Congress that ‘my sense is that more fiscal support‘ is needed for the economy. He offered no argument beyond consumer spending and no specific policy guidance. He seems to want Congress simply to spend more. Please stop. Fiscal policy isn’t the Fed’s job, or at least it shouldn’t be, and the more it meddles in spending debates the more people will see it as a political actor. Predicting interest rates four years from now is hard enough.”

Today should be interesting…

Inflation
I bring this all up because not only does it have implications for the US dollar but also inflation in coming years if the fiscal side joins monetary policy. It was the fiscal side that was missing during the last bout of ZIRP and QE and a reason why we didn’t see the consumer price inflation that monetary policy was intended to create. Instead it was reflected in asset prices as we know.

Negative Interest Rates Did Not Work
The pound is rising after the BoE Governor Andrew Bailey said the research announced last week into negative interest rate policy should not be taken as a sign that they see it happening soon but only a look to see whether it is even possible. Gilt yields are rising too in response with the 2 yr yield up almost 3.5 bps.

The Swedish Riksbank is a central bank that experimented with negative rates and decided it didn’t work which triggered the trip back to zero for its repo rate. They affirmed that today and said they’d rather continuing using QE for policy instead. Not that just buying bonds is any magic elixir for economic activity either as seen over the past few decades via the BoJ, Fed, ECB and other central banks.

“Further recovery in the freight economy was shown…This supports what we have heard from public carriers across all modes, and we believe the trend of ‘better’ has continued here in September. Expect the Cass Index to move back closer to year ago levels in the coming months, although we think it will stay in negative territory until 2021…all signs point to an improving economy, and goods movement is getting better every month.”

Shipment Surcharges
At least right now I believe a lot of this is a needed rebuild in inventories where factories are still making up for the lost months of March, April and May. This rebuild and need for shipping it across the world is also reflected in sharply higher shipping rates across all modes. Truckstop.com said in a report that trucking spot rates are up 19% y/o/y. Cargo rates via ship are also up sharply and we know FedEx and UPS are implementing surcharges. This all is a major factor in my higher inflation thesis as capacity constraints result in higher prices. 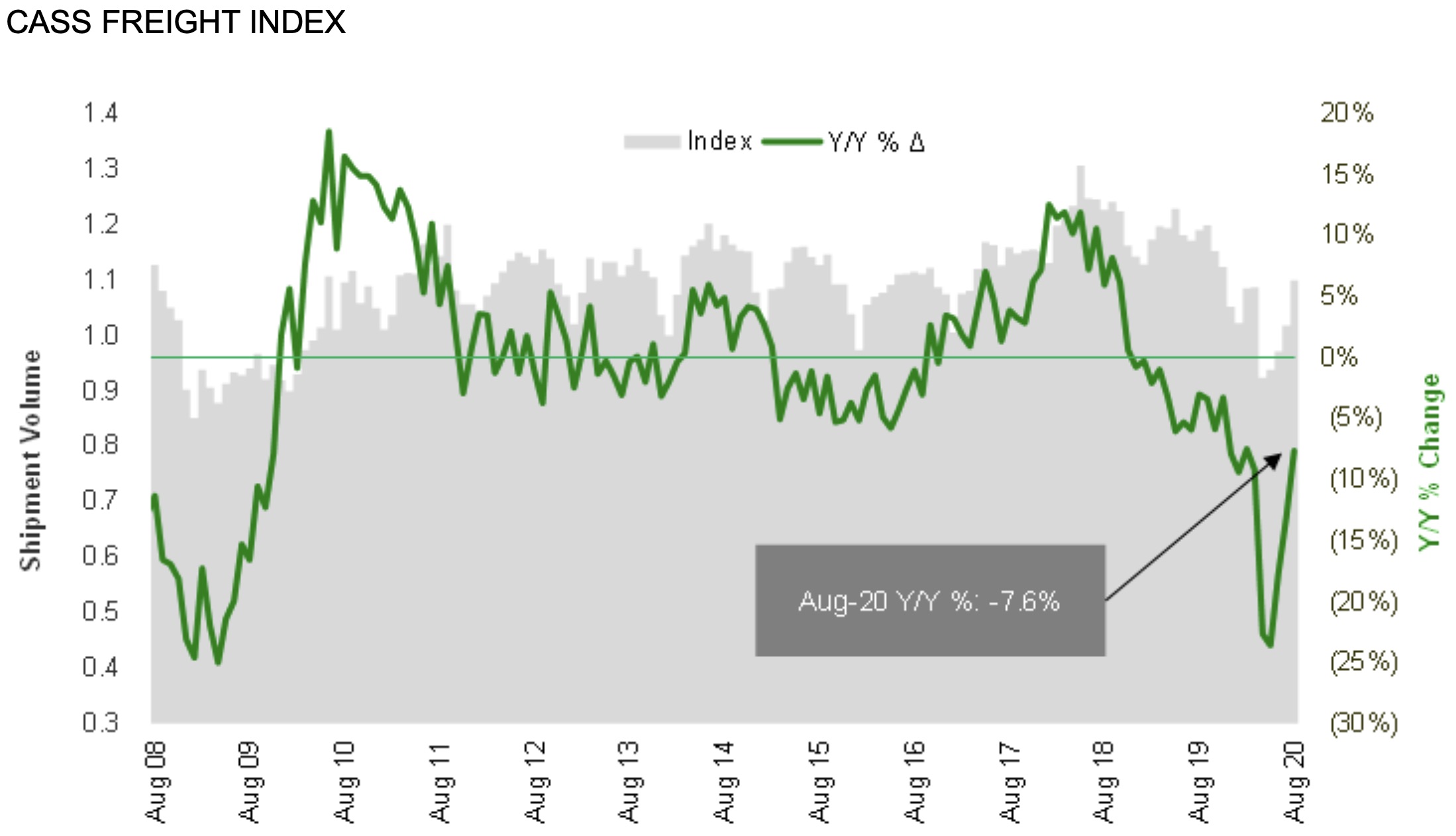