It is clear that gold and Bitcoin holders are allies against central banks.

Gold & Bitcoin Holders Allies Against Central Banks
October 21 (King World News) – Peter Boockvar:  The thing about those that are bullish on Bitcoin and those that like gold is that they are essentially soul mates in terms of the rational for their bullishness. There is an anti central bank mentality, disrespect for how fiat currencies have been treated and certainly now worries about inflation.

You’ve heard me rant plenty over the years on my criticism of Fed and other central bank policy and I’ve been yelling this inflation story since last year and both with a positive stance on gold. While some of our clients own Bitcoin of their own choosing, I do not, yet. Yet because maybe I will at some point. I instead have chosen to play my above macro beliefs with gold instead, for better or worse. Obviously worse in terms of performance which I guess is all what matters right now in the eyes of many.

I do have to say though that when I hear from some that Bitcoin is replacing gold where both are trading off the same macro fundamentals, I think it’s complete nonsense. Yes, Bitcoin has sucked the oxygen out of the gold room over the past year but something that is 13 years old is not replacing something with 5000 years of history. They can though coexist and complement each other…

I will also say this, gold and Bitcoin are not the only two assets that are essentially finite in nature with very little supply coming in the many years to come. They are also not making anymore 1962 Mickey Mantle baseball cards or more number 1 Superman comic books. I don’t hear about Mickey Mantle maximalists, although prices of his cards, along with comic books, have skyrocked too.

Venezuelans Using Gold To Pay For Meals
I bring this all up because there was a story from Bloomberg News yesterday titled “Venezuelans break off flakes of gold to pay for meals, haircuts.” They barely have access to the internet so Bitcoin does them no good. “A one night stay at a hotel? That’ll be half a gram. Lunch for two at a Chinese restaurant? A quarter of a gram. A haircut? An eighth of a gram, please.” They interviewed a 20 yr old kid Jorge Pena who said “You can pay for everything with gold.” How do people get flakes? “They use hand tools to break shards off nuggets and then carry them in their pockets, often wrapped in bolivar bills, one of the few remaining uses for the currency.”

Gold is money, it’s been so for thousands of years, is proving itself once again and the macro backdrop for it has never been better and no amount of made up competition from an asset that is benefiting from that same positive backdrop is going to stop it from going where it will ultimately go and that is likely higher, along with maybe Bitcoin.

Gold
Graddhy out of Sweden:  Been saying for 6 weeks or so that Aug 9th looks good as major low so far. Also said day 36 is probable daily cycle low which is now also confirmed. We need to take out 1800+1837.50 to be in the clear, but it sure is looking good so far. 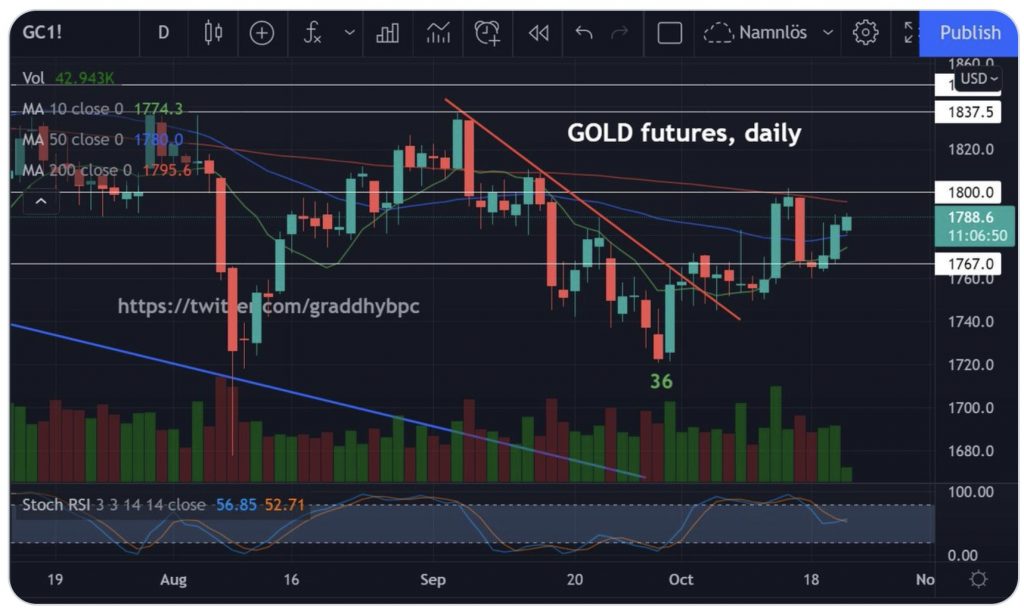 Something Very Big Has Just Been Uncovered in the Prolific Ring of Fire
Over the past several months explorer Kalo Gold has flown under the radar while making major progress at its Vatu Aurum project in Fiji. Its focus was not on drilling, but on geophysics and it appears that Kalo could be onto something very big. They have outlined not only several very large high priority drill targets near an existing deposit but have shown that there is potentially two large shallow porphyry heat sources just below it. Kalo is now getting ready to commence drilling.

On its own this is very exciting news, but what makes it even more special is that it is located in the prolific South Pacific Ring of Fire, host to some of the world’s largest high grade gold systems, and Kalo already has a near-surface deposit, Qiriyaga Hill, with several high grade intersections including 36.02 g/t Au over 8.75 metres and 13.36 g/t Au over 10 metres that is potentially just the tip of the iceberg.  This has recently attracted one of the world’s legendary ore finders, Paul Harbidge, former SVP Exploration of Goldcorp (sold to Newmont to US$10 billion in 2019) and President and CEO of GT Gold (sold to Newmont for US$311 million in 2021) to its team. Kalo Gold, symbol KALO in Canada and KLGDF in the US.