One of the greats just said the gold and silver set up is just like 2009, prior to exploding higher.

Silver
March 24 (King World News) – Ole Hansen, Head of Commodity Strategy at Saxo Bank:  The global spreading of the coronavirus will have a negative impact on global growth over the coming quarters. In response to this development we have seen pro-cyclical commodities led by crude oil suffer a major blow while industrial metals have dropped to levels last seen in 2016. The biggest casualty however has been silver which derives half its demand from investors and half from the use in industrial applications.

Being categorised as semi-precious, silver tend to follow gold closer than any other metal. During the past few weeks, however it collapsed by almost 40% while the gold-silver ratio spiked to 127 ounces of silver to one ounce of gold. Some 70% above the average ratio of 77 seen during the previous five years.

Silver Rebounding Strongly Off The Lows 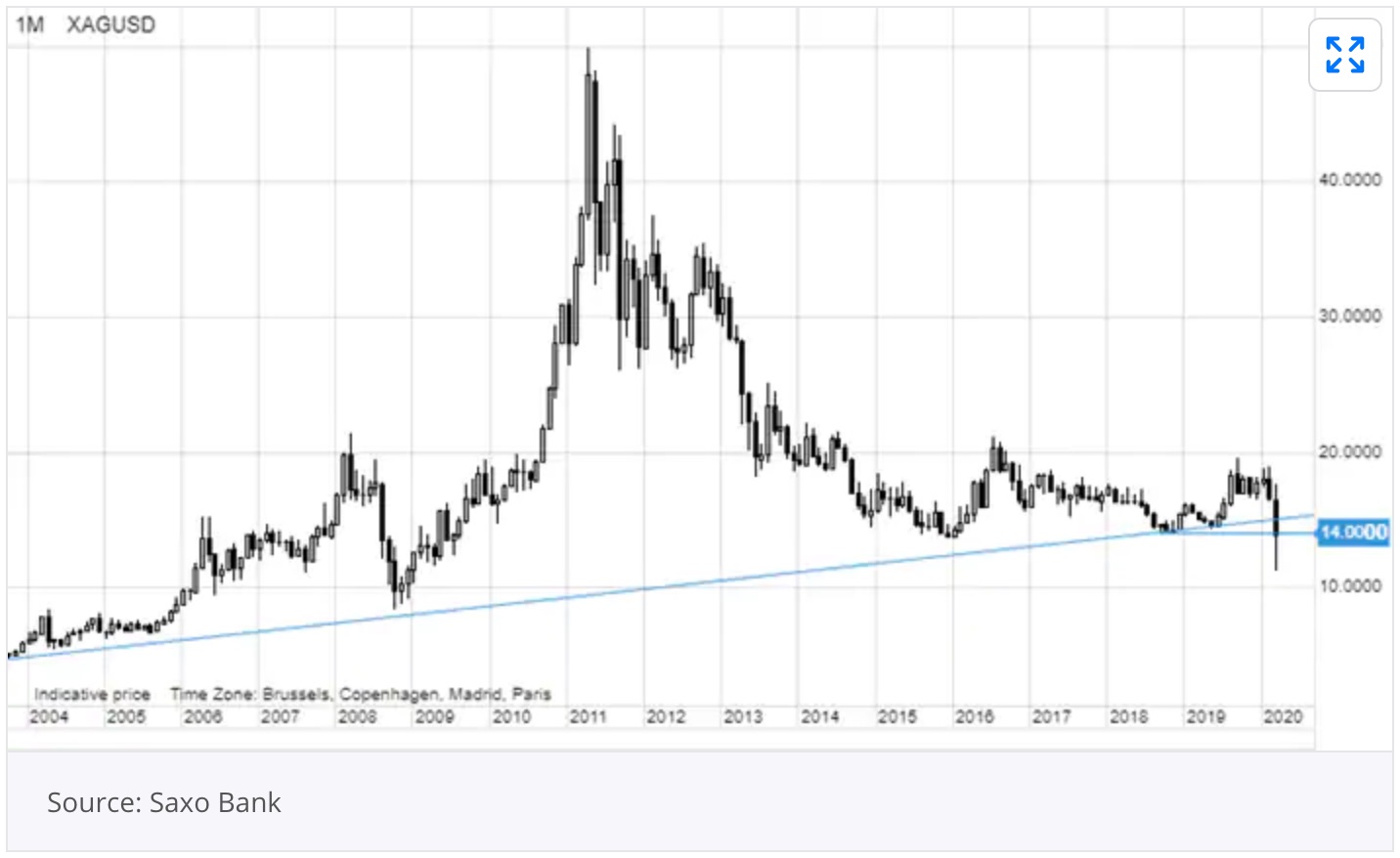 Silver tends to perform like a high beta gold, meaning that it rallies faster but also drops faster. The combination of recession worries and the recent dash-for-cash phenomenon helped tip silver over the edge. Once the near twenty-year uptrend from 2002 was broken the floodgates opened and silver was left exposed to another problem that can occur when markets get out control. Namely its lack of liquidity which also helps to explain why the recent sell-off in both platinum and palladium ended up being so aggressive.

What we are left with is a metal, which like the Norwegian Kroner, has come symbol of the extreme risk adversity currently sweeping through the markets. The chart below shows a remarkable similar behavior between these two unrelated markets against their peers: gold and the euro. 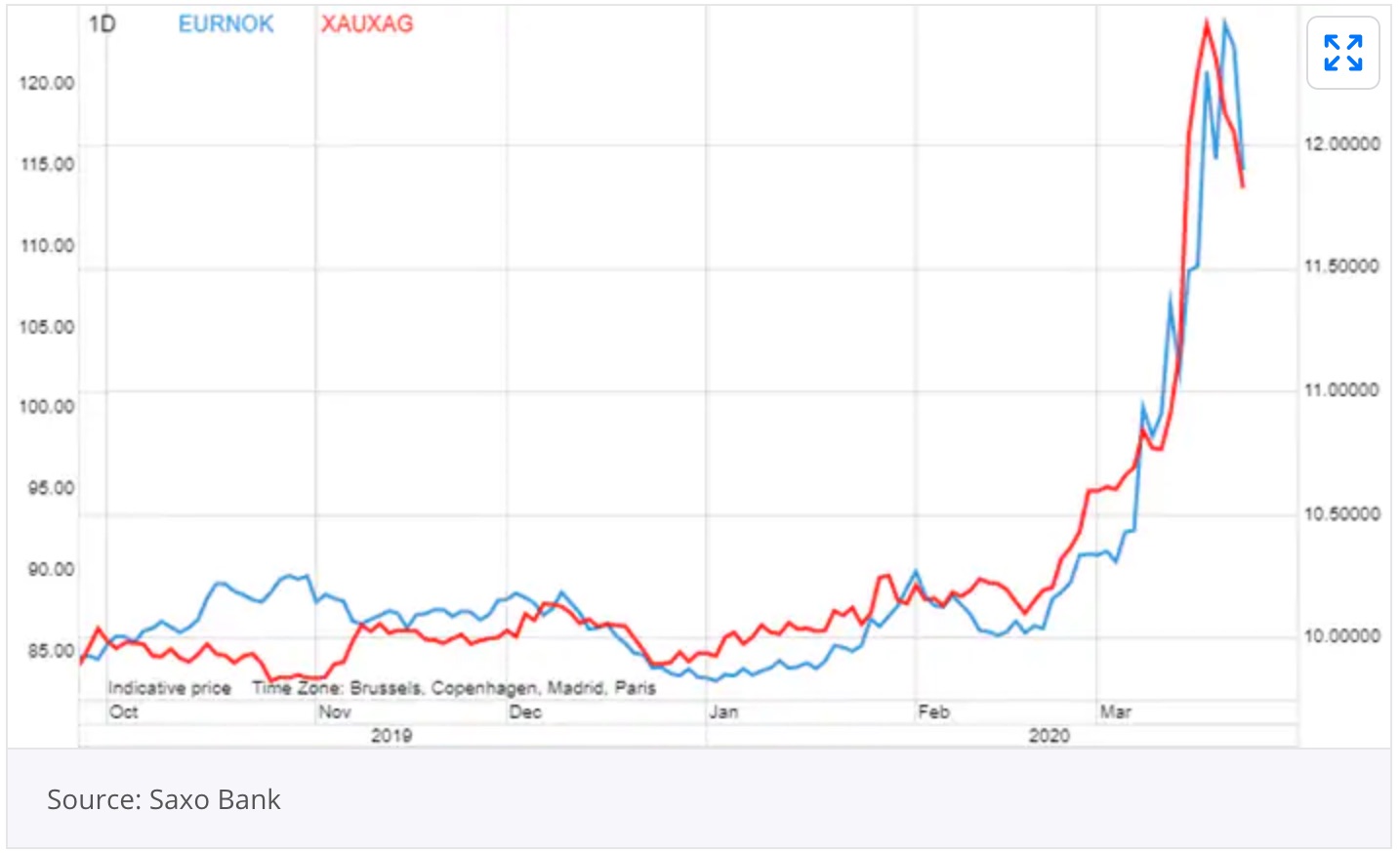 Speculators or hedge funds, as they are usual called, have reacted to the deteriorating outlook by slashing their net-long in COMEX silver futures by two-thirds. Longer term investors using exchange-traded funds have taken advantage of the latest setback to increase holdings to 19,372 tons, a four months high. 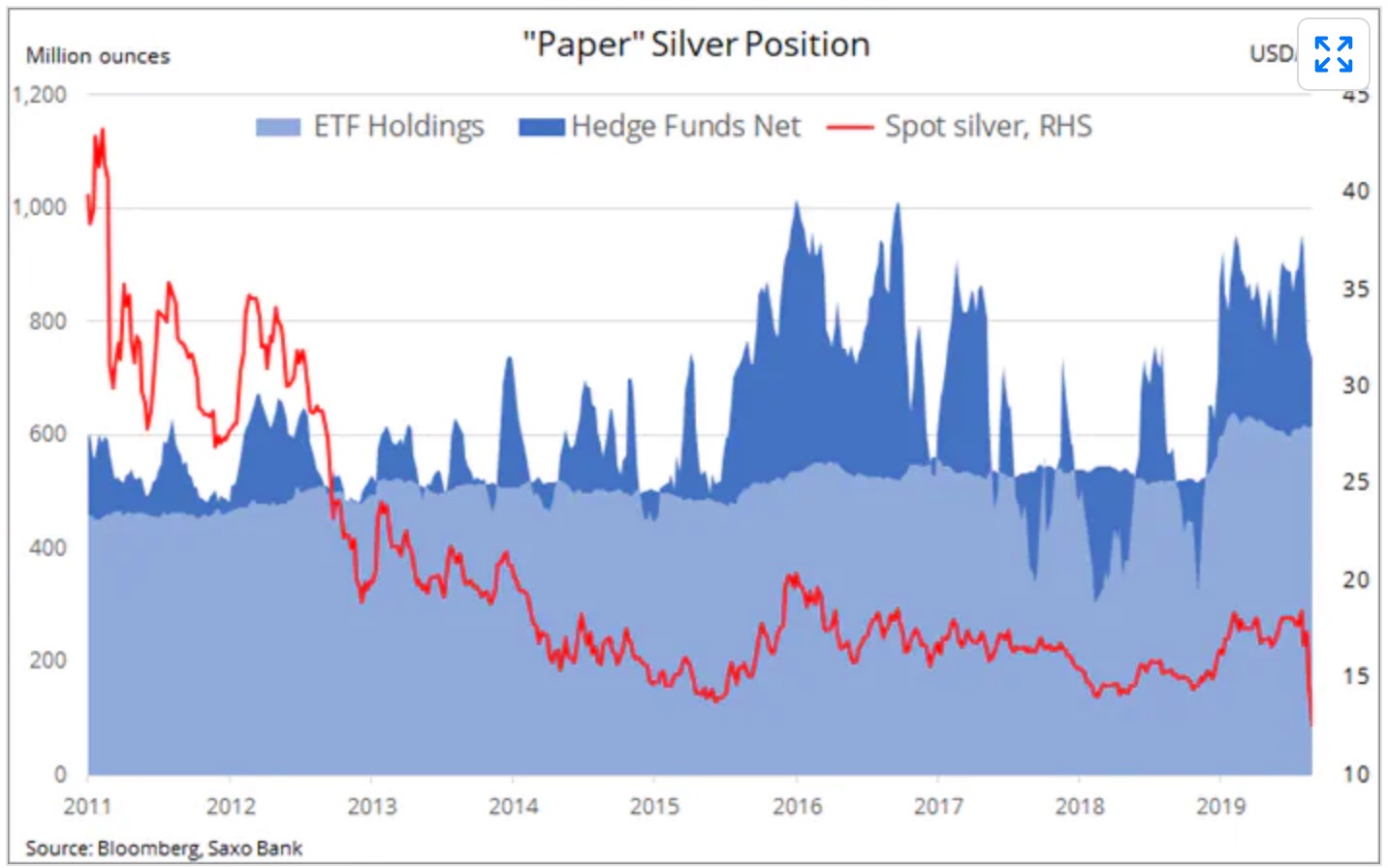 The outlook for silver looks supportive in our opinion and the following tables highlight why that is. Silver is mostly mined as a by-product of other major metals such as zinc, lead, copper and gold. In fact only around 30% of mined silver comes from pure silver mines. The 20% drop in the LME London Metals Index since January and the current recessionary outlook may inadvertently lead to a supply crunch for silver as production slows. 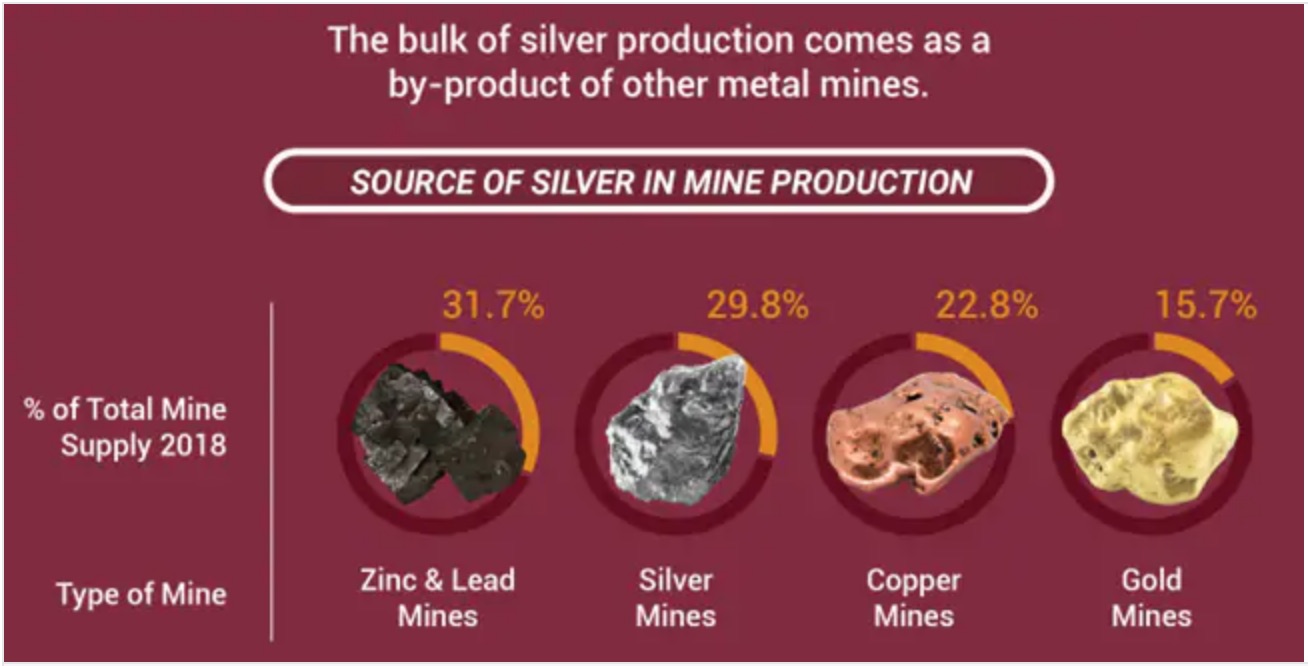 Silver’s industrial demand going forward is increasingly going to come from the alternative energy sector, especially towards its growing use in photovoltaic solar cells. Apart from that silver is also the best natural conductor of electricity and heat. It’s generally being used in electronics, batteries, LED chips, semiconductors and electric vehicles. 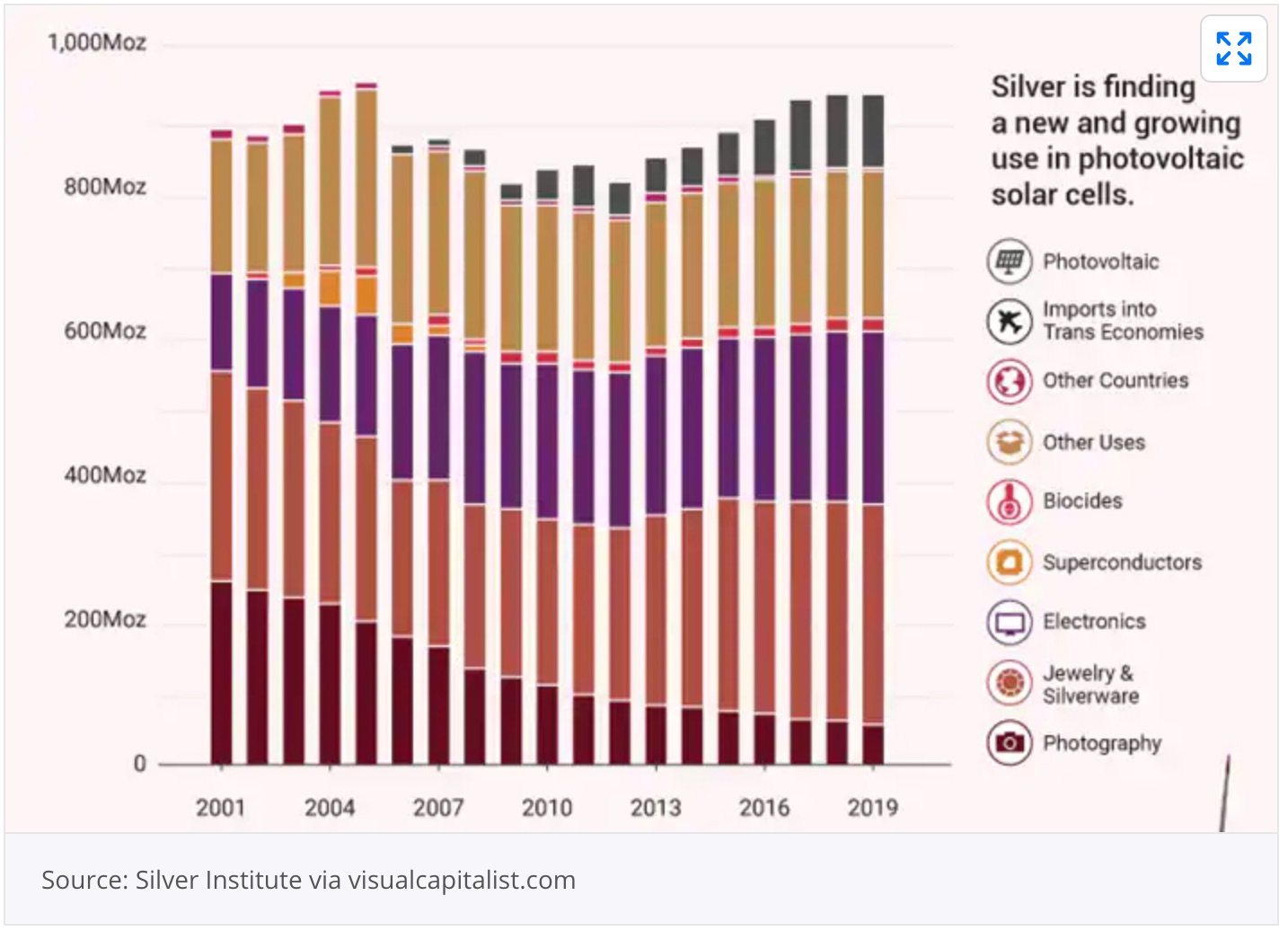 Once the world begin to normalise investors will start looking for relative value and based on our assumption that supply may slow and given its elevated discount relative to gold we see renewed upside for silver.

Gold and silver has already rallied strongly after the US Federal Reserve on Monday rolled out some of its heaviest artillery to announce ‘open ended’ QE. It was a reminder of the moves they made in March 2009 which finally succeeded in stabilizing the markets. The actions back then also raised inflationary and debasement concerns, both of which started a strong rally in precious metals over the following years.

From a technical perspective silver has already made it back above $14/oz thereby sending a signal that the recent breakout to the downside was a false one. The XAUXAG ratio has come down to 113 but remains very elevated compared with its recent past.

Summary:
Gold and silver has already rallied strongly after the US Federal Reserve on Monday rolled out some of its heaviest artillery to announce open ended QE. It was a reminder of the moves they made in March 2009 which started a strong rally in precious metals over the following years. Given silver’s historic cheapness, both against the dollar and especially against gold we see the potential for a strong recovery.

Gold Erupts
***Also Released: GOLD ERUPTS $130: Gold Soars A Staggering 9% As It Approaches The $1,700 Level Before Pulling Back, But Look At This… CLICK HERE.