German PPI is up a staggering 32.7%, but here are more surprises.

Drowning In Debt
July 20 (King World News) – Egon von Greyerz:  With global debt at $300 trillion+, and combined U.S. corporate, household and public debt well past $90 trillion, the Fed’s “face-saving” attempt to raise rates as a weapon against 9% reported CPI inflation is a failed strategy from the start…

More “Transitory” Inflation
Peter Boockvar:  As Nord Stream will likely be turned back on but uncertain as to what extent, the Dutch TTF natural gas price is up 5% to 162 after falling by 3% yesterday when it was said it would pipe some gas again hopefully starting tomorrow. 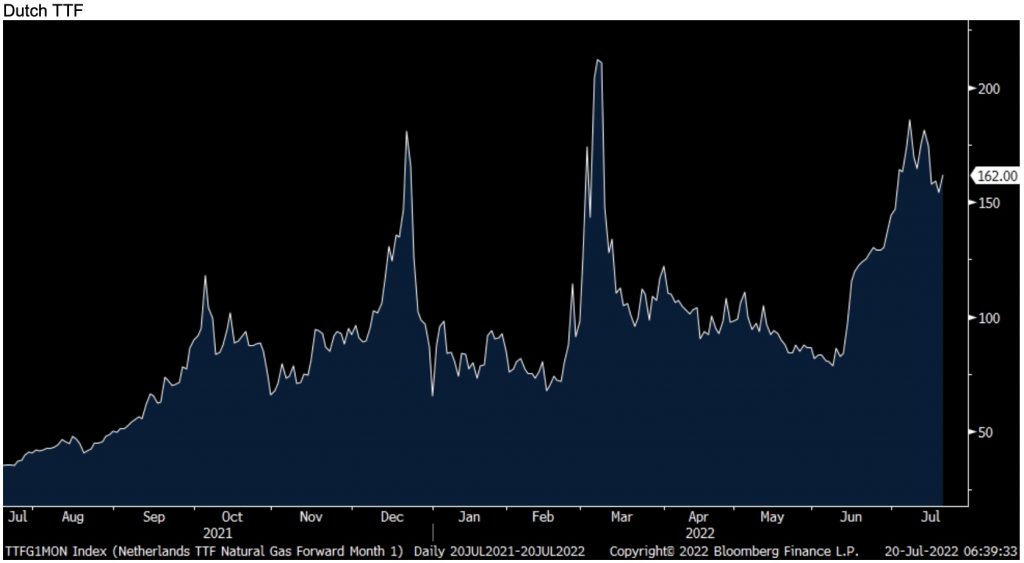 This equates to about $52 per mmBTU vs the US price today at $7.30. The euro is down a touch after 3 days of gains and European bourses went negative again at around 6:30am. No need to state the obvious the extreme damage that will be done to German industry if they don’t get enough natural gas, the low cost feedstock they so desperately rely on.

What Are These Guys Smoking?
As we progress through more earnings reports, there remains a high confidence on the part of some CEO’s that we will not enter a recession in that what many see right now, according to them, don’t point to it (even though CFO surveys seen more concerning). The bank CEO’s in particular have been pretty optimistic over the past week. In yesterday’s JB Hunt’s earnings call, an executive said

“We have had concern from customers on inventory, having the wrong inventory, and where it is located, but I’ve not heard any customers tell us that there’s a downturn coming or anything to plan for.”

I will say that a recession is not an event, it is a progression of business activity that slows over time and culminates in higher unemployment and a recession and why pinpointing the exact moment is never easy. With respect to the employment story, I need to remind people that recessions start soon after it bottoms, and expansions begin soon after it tops. I heard Fed Governor Waller last week who said he couldn’t imagine how a recession can start with the unemployment rate at just 3.6%. I encourage him to look at history.

Purchases Of New Homes Continues To Be Weak 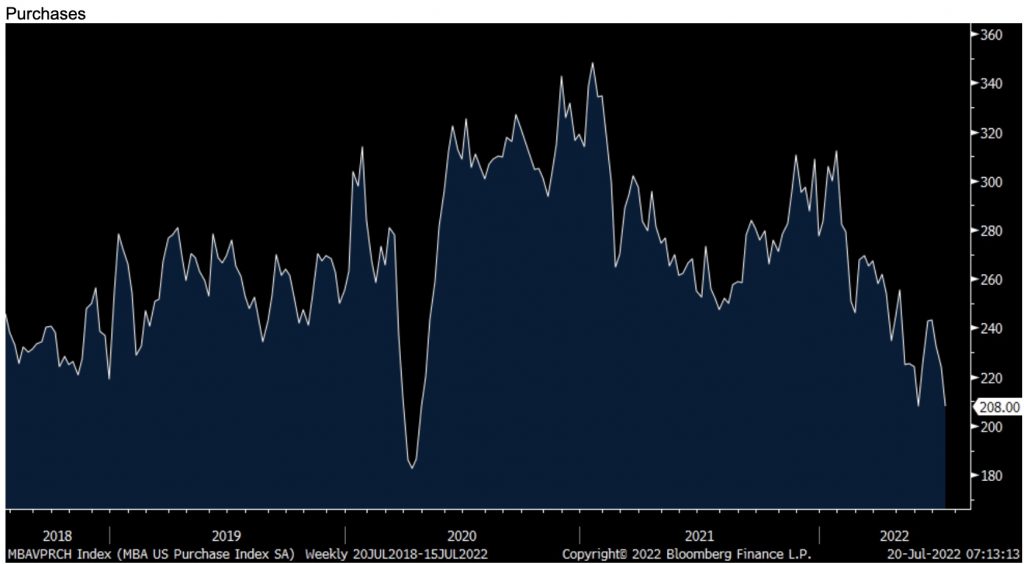 Refi’s dropped by 4.3% w/o/w and by 80% y/o/y. We clearly know what’s going on in the housing market so no need to add much here other than to say demand continues to slow sharply. The purchase component in particular is at the lowest level since April 2020.

German Inflation Crippling
Tomorrow the ECB will be nonsensically debating on whether they should hike rates by 25 or 50 bps to either keep them below zero or taking it to exactly zero. At the same time Germany today said PPI was up 32.7% y/o/y, though a touch below the estimate of up 33.7%. 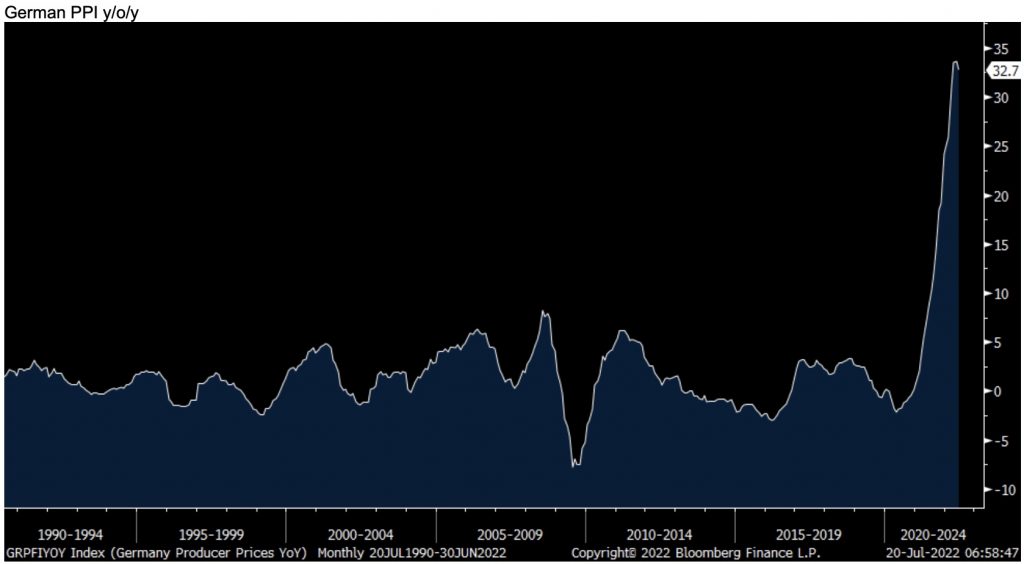 UK Producer Price Index Hits 24%
After BoE Governor Andrew Bailey yesterday said they could hike 50 bps in August instead of 25 bps, UK CPI in June seen today was up 9.4% y/o/y, one tenth more than anticipated and a fresh 40 yr high with a core rate of up 5.8% as expected. The retail price index, which is used to price inflation linkers, was up 11.8% y/o/y. PPI input prices jumped 24% and output charges grew by 16.5%, both just above expectations. The main here is two fold. Consumers are seeing sharply falling real wages and corporate profit margins are getting squeezed. There is little change in UK inflation breakevens and the pound is down a hair after a 3 day winning streak.

Real Estate
Existing home sales in June fell to 5.12mm annualized, about 200k below expectations, down from 5.41mm in May and the least since June 2020. 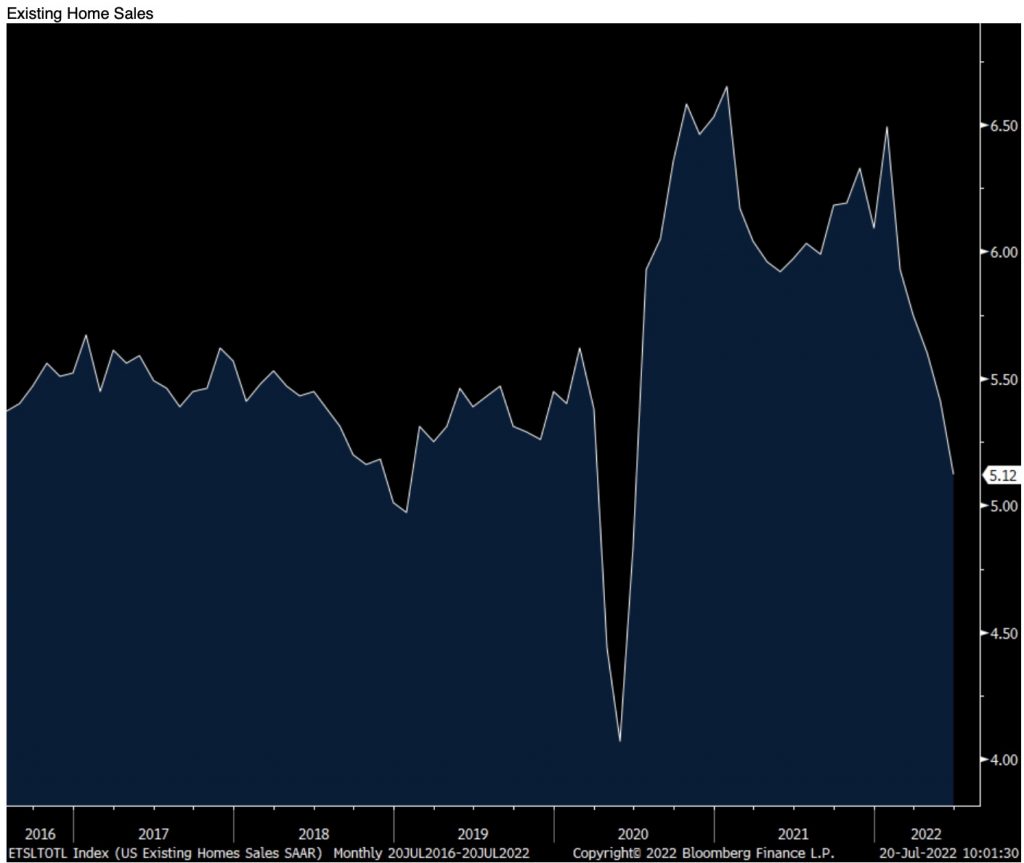 Assume many of these closings saw contracts signed over the prior 3-5 months when mortgage rates rose from about 3.35% to about 5.50% (and then touched 6% in June). Regionally, most of the decline came from homes sold in the South and West.

Home supply increased but always does in the spring and early summer. Months’ supply at 3 is still half what is the long term average. The median home price rose 13.4% to a new record high of $416,000 but which is the slowest pace of increase since December 2020 which is definitely welcome with unaffordability a big issue. Over the past 20 years, for perspective, the average median home price gain is 4.7%. 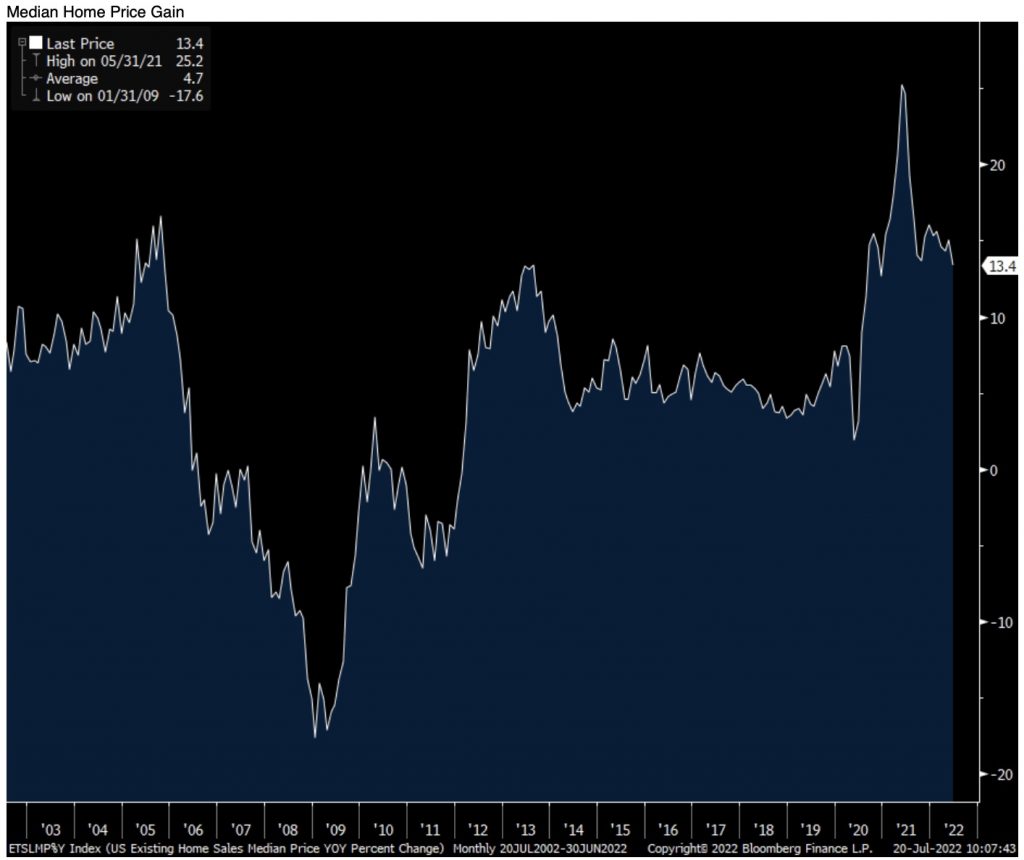 First time buyers made up 30% of sales, up from 27% in May and vs 31% one year ago which investors/all cash buyers held their pace with existing home owners slowing their pace (they probably don’t want to lose their 3% mortgage). Amazingly still, ‘days on the market’ was only 14 days vs 16 in May and 17 in April but the NAR said “homes priced too high are deterring prospective buyers.”

Saying what is now well known, the NAR also said “Falling housing affordability continues to take a toll on potential home buyers. Both mortgage rates and home prices have risen too sharply in a short span of time.”

This Does Not Bode Well
I having nothing more to add but to highlight that housing (including new construction, remodeling, brokers fees, rents, utilities) typically makes up between 15-18% of the US GDP so include this thought when debating whether we’re in or headed towards an economic recession.