With gold, silver and bonds surging after the Fed’s decision to keep interest rates unchanged, today the top trends forecaster in the world, Gerald Celente, issued this dire warning for 2020.

Dire Prediction For 2020
December 11 (King World News) – Gerald Celente:  “In 2020, the homeless population in a country, state, city, town, or village near you will rapidly increase.

Take a trip around the world.

According to Fitch Ratings, global car sales in 2019 are expected to have a larger drop than in 2008. This year, some 100,000 auto-industry workers in India have lost their jobs, and, in Germany, some 500,000 auto jobs were lost or are at risk.

That’s just the tip of the jobless trend, which will accelerate the “Homeless” trend.

Mexico is in recession, and so, too, will more and more countries around the developed and developing world as economies sink lower in 2020.

In New York City, ranked by New World Health as the wealthiest city in the world, with 65 billionaires and over 380,000 millionaires, has 114,000 homeless students or 10 percent of children in its public schools – a 70 percent increase over the past decade.

Again, it’s across the globe and will get worse.

Adding to the decline of future jobs is the rise of robots replacing workers.

Dubbed “Operation 4.0,” Deutsche Bank plans to replace 18,000 “back-office” positions with robots, which will save them €6 billion over the next three years.

And according to OECD, an intergovernmental economic organization, some 14 percent of jobs are likely to be lost in the upcoming years as a result of automation.

Art Cashin – Fed, Plus More
READ THIS NEXT! Art Cashin – What To Watch From The Fed Today, Plus On This Day… CLICK HERE TO READ.

***To listen to James Turk’s KWN audio interview discussing the gold and silver markets and what to expect next CLICK HERE OR ON THE IMAGE BELOW. 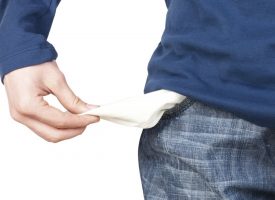