As the world continues to be engulfed in chaos, we are headed “From QE to Eternity.”

From QE to Eternity
June 3 (King World News) – Jeff Snider at Alhambra Partners:  So, you’re convinced that low rates are powerful stimulus. You believe, like any good standing Economist, that reduced interest costs can only lead to more credit across-the-board. That with more credit will emerge more economic activity and, better, activity of the inflationary variety. A recovery, in other words.

What happens, however, if you also believe you’ve been responsible for bringing rates down all across the curve…and then no recovery. Just as the textbook said, lower yields as far as the eye can see. And yet, zip.

Any normal, rational person requiring nothing more than common sense would see this situation and realize the faulty premise; and the stark implications therefore needed to rectify the matter (that Economics might need to just start over). Maybe low rates aren’t always stimulus?

Nah. Economists have constructed “laws” out of their dogma, therefore they instead seek out plausible-sounding answers by diving back into ceteris paribus. They are absolutely certain, despite the mountains of contrary planetary evidence, that low rates are indeed the trick – but, taking things one step forward, the world won’t always be attached to those low rates.

Stay with me here, because this is where they try to be clever…

If the economy was to actually recover after being stimulated successfully, what would interest rates do? They would, quite naturally, normalize in some fashion, full or partial. And that would mean higher interest rates not far over the depressed horizon.

High rates are, in the orthodox canon, the very anathema to stimulus (despite, as Milton Friedman pointed out, all historical experience showing otherwise).

A ha! The economy failed to recover because, Economists now believe, central bankers were only being too successful. They had brought rates down very low which created the spark of recovery, but then watched in horror as it must’ve been snuffed out by that very thing! Recovery that wasn’t able to follow-through due to the high rates such a recovery would have achieved.

As I wrote last week:

Rather than assume QE hadn’t been effective, that there had been no flood of money or dollars at all, Bernanke’s policymakers instead left Friedman and fingered bond yields. The explanation they settled upon was low rates (and QE at the ZLB) had been successful because they all believed it couldn’t possibly fail, therefore what caused the lack of recovery was rates rising prematurely.

Got that? Their own success had to have been our economic undoing. The bond market, being the bond market and actually discounting future information and perceptions, realized, they claimed, that the Fed was absolutely guaranteed to create recovery, and so began the selling of bonds, pushing higher the risk-free set of rates in anticipation of much better and more profitable opportunities an actual recovery will bring…

But, in doing so, that rush to sell bonds, this BOND ROUT!!!, must’ve short-circuited the recovery itself, choking off economic momentum with rising yields and interest rates.

Wait, wait, wait. That never actually happened, though. As you’re probably muttering to yourself, I don’t recall any such BOND ROUT!!! to begin with. They kept saying it was going to happen, kept assuring everyone that it would, but it never actually did.

This is where Economists have truly become creative (which is exactly what you don’t want from central bankers; money should be boring, a straightforward matter and if you feel the need to be creative about monetary policy you are doing it wrong).

Or, more specifically, the possibility that rates might rise prematurely. Fears of a BOND ROUT!!! that never leaves the future tense, this is what has kept the economy under wraps for a decade?

If you hadn’t noticed already, this is more than bordering upon the realm of the absurd. According to this theory, QE/low rates are effective stimulus which first lowers rates across-the-board, but because it is effective stimulus the potential for rates to rise then cuts off that stimulus. So, QE works very well – except in that it seems easily thwarted by a potential result that never actually happens.

The tortured logic that must be achieved, if that’s the right word, in order to prevent Economists from having to recognize and admit they have no idea what they are doing, that QE is all a big joke, and more than anything the entire foundation for modern central banking is built upon what history has conclusively shown is the opposite of what they want to do.

Instead of taking that rational approach applying real evidence to observations, conducting actual science, central bankers have remained steadfast within the realm of statistical models to come up with something called forward guidance.

In other words, recognition that people do expect rates to rise in a recovery but then theoretically offsetting the expectation by the central bank promising to hold rates lower for longer (if you’re wondering where that Bernanke/Yellen-era slogan came from) – until long after the recovery has been established. Thereby ensuring, in theory, that the expectation for higher rates doesn’t choke off the positive economic momentum low rates must have sparked.

Yield curve control (YCC), as practiced in Japan, or now yield caps that have been proposed in the US for the Federal Reserve, simply take forward guidance to the next level. Rather than mere promises of lower for longer, the central bank actually declares a (or several) threshold(s) ahead of time, pledging to buy any amount of bonds at the target price.

For most in the media, the Bank of Japan’s YCC was wildly successful. Announced in 2016, JGB yields never did get much higher than the proposed cap placed upon them. Way to go Kuroda!

We are led to believe this was because the Bank stepped up and bought some enormous wave of JGB’s which were sold by Japanese banks before rising rates could snuff out the economic acceleration, banks that were totally convinced Japan was on the verge of finally pushing off into inflationary recovery because three years of QQE would definitely turn out to be the right magic number of years after twenty-five years of nothing.

Couldn’t it rather have been that there just weren’t that many sellers to begin with because QQE hadn’t achieved a damn thing? That banks seeing very little of meaningful economic prospects purposefully chose to continue to hold on to the safest and most liquid instruments? 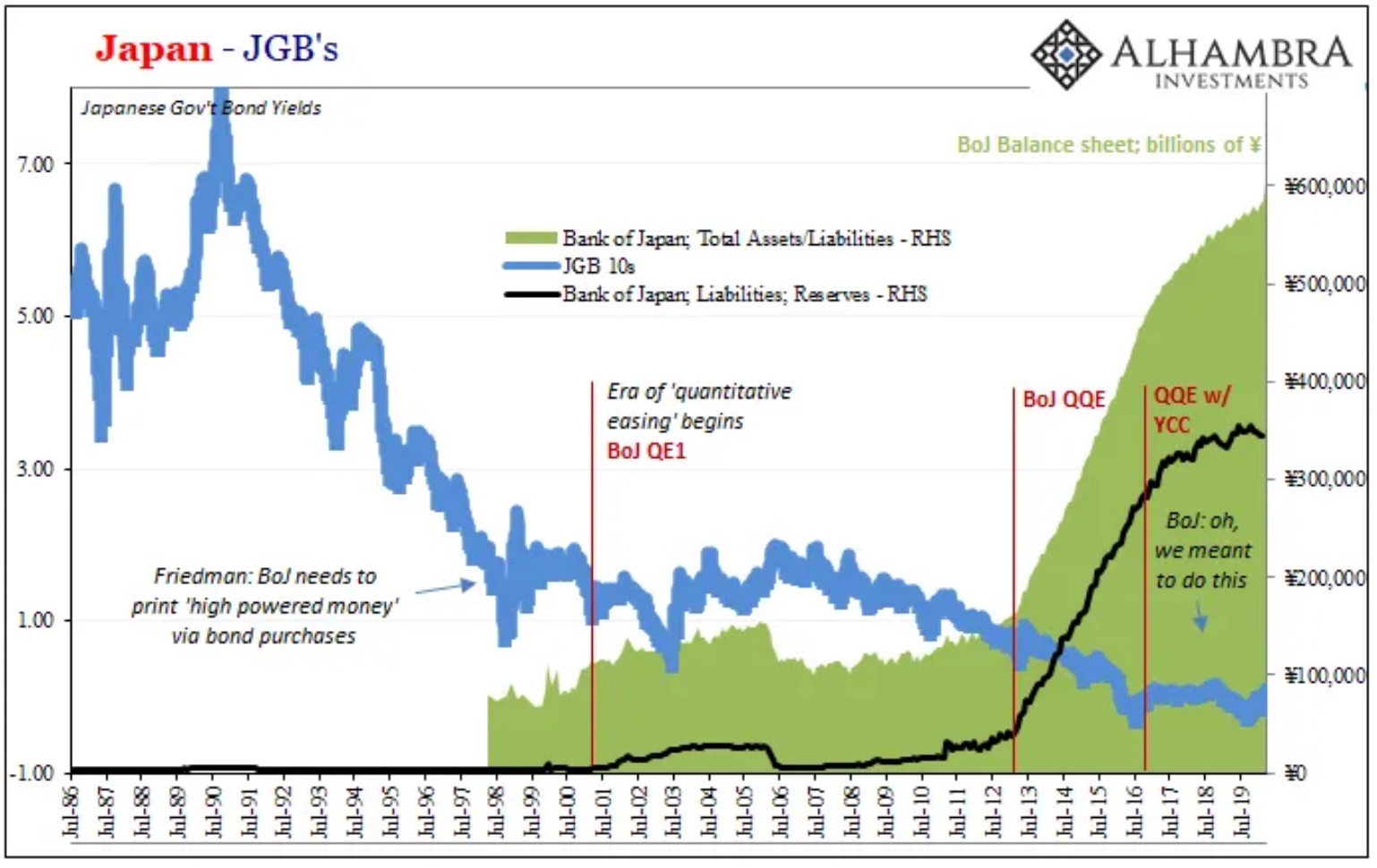 Bullshit
The most sinister aspect of YCC has been how it has allowed the Bank of Japan to take credit for the most glaring warning as to its massive (further) failures. The bond market ever since the late eighties has been the central bank’s biggest critic, the lower rates went, across the entire curve, and stayed that way, the more obvious in its criticism (the interest rate fallacy).

With QQE in its eighth year, is it really too much to ask to dispense with all the pretense? That the idea is at all competent, and that eight as opposed to three, or six, or four, is the magic right number of years?

Even more frustratingly, there’s an added bonus for the Federal Reserve, as Jay Powell and his gang sees it, given recent times. Yield caps hand the FOMC the opportunity to further stamp confidence on their current policies, efforts that so far haven’t produced much in the way of tangible results yields-wise.

What Powell can now tell the public (especially the financial services industry whose members are absolutely desperate for any authoritative-sounding justification to rationalize their buy, buy, buy) is that he is so damn confident about what the Fed has done since last March (forget all that stuff before March 23 or so) that the FOMC has decided they absolutely, positively, 100% guaranteed are going to have to cap bond yields because there is no possible way, not one in a billion, that the inflation and recovery aren’t going to happen this time.

Did you not see the flood! It was in all the papers.

YCC and yield caps offer Powell another angle for his ongoing performance drama, his childish act of looking sophisticated, powerful, and, most of all, confident – the secret ingredient in all the policy discussions, the very thing the real world doesn’t really need from a central bank.

And it won’t matter if, like during the forties, the Fed doesn’t have to buy a single bond (because of the lack of sellers, no BOND ROUT!!!), he’ll be able to say to the uncritical financial media that yields remain low because the Fed wants them to remain low. And that will be the story moving forward.

Which, ladies and gentlemen, is exactly how you end up with Japanification. 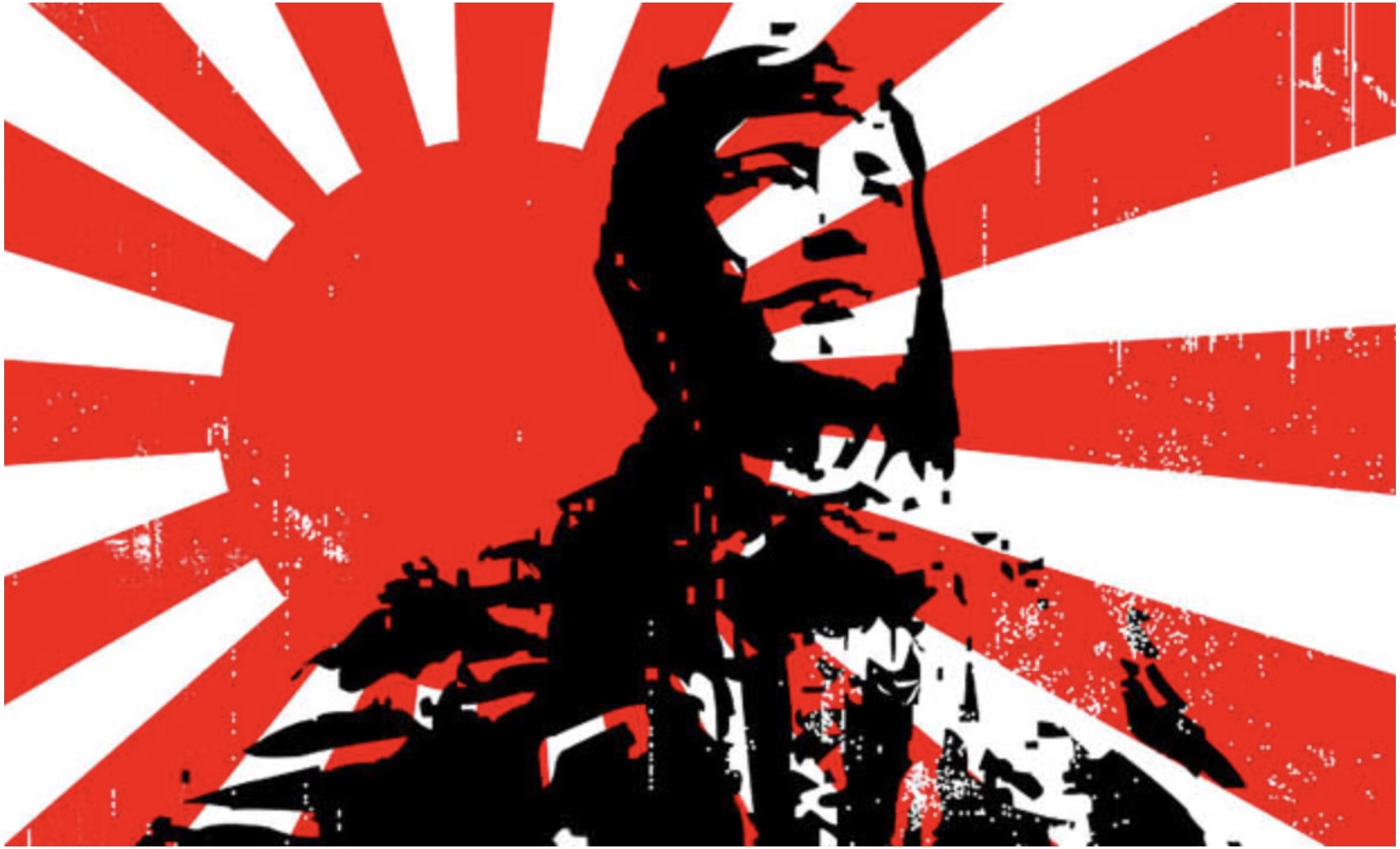 Because, despite seven plus years of QQE and almost four of those with YCC, Japan’s gone nowhere. All the ETF buying, the J-REITs, JGB’s, assets of all kinds, it doesn’t work. Japan was never in any danger of higher rates, but its media now tells you that was by design. Low rate stimulus forever and ever into the future.

A dozen years shorn of badly needed economic growth by incompetence at all levels, and now the prospects for so much more to just vanish. We meant to do that! 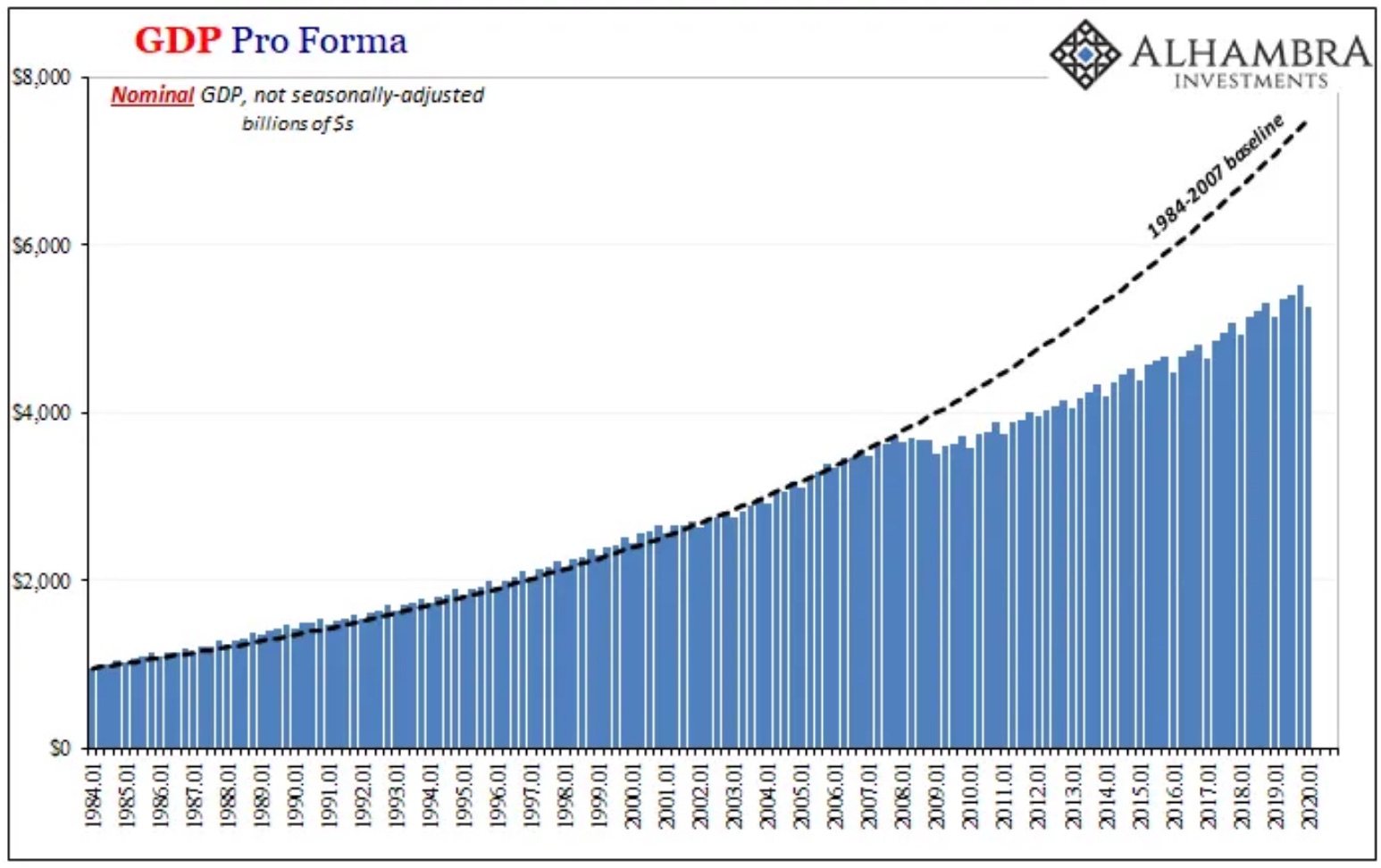 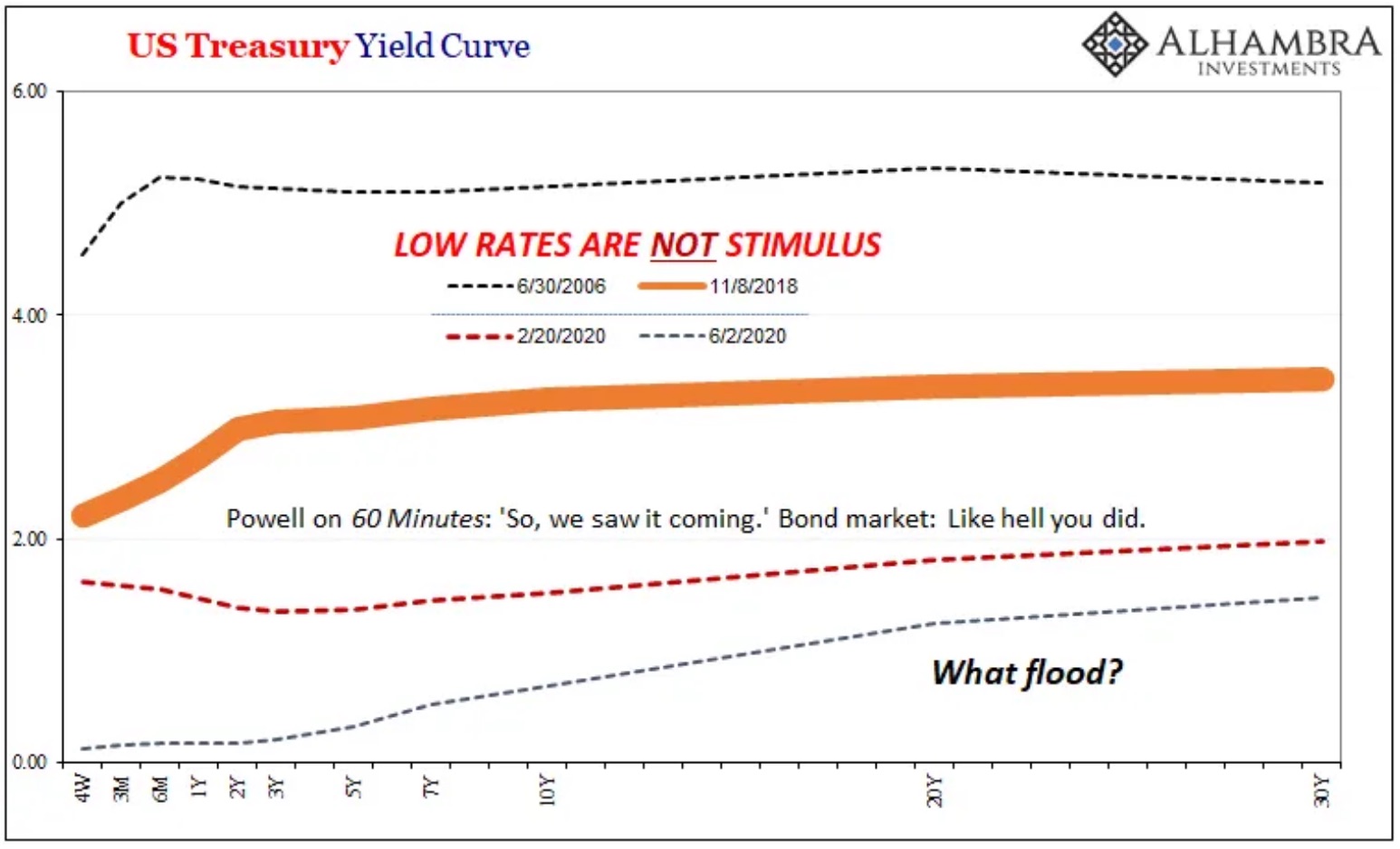