Forget the mainstream media propaganda. There is more dollar-destroying liquidity ahead.

What Bankers Do, Rather Than Say
By now, the open farce as to “central bank transparency” has been made abundantly clear; looking for plain-speak honesty in such circles is akin to looking for an honest man in parliament.

Thus, rather than just follow what centrals bankers say, it’s often far wiser to watch what they do.

Central Bank Gold Purchases
Toward this end, it’s worth noting that central banks have been buying gold lately, and at significant levels. 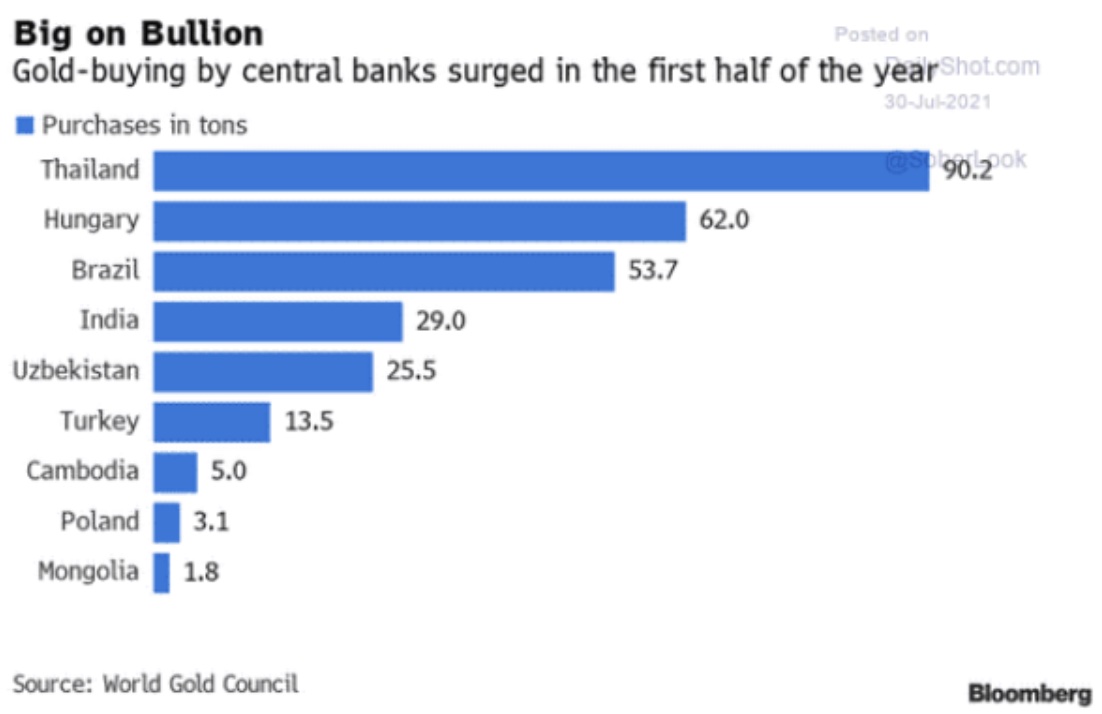 In the first half of 2021, global gold reserves at the central banks expanded by 333 tons, which is almost 40% above the five-year average.

The big buyers were Thailand, Hungary and Brazil, countries all-too familiar with the pain of importing U.S. inflationary policies and hence thirsty for real stores of value outside the increasingly surreal U.S. dollar.

The current pace of post-World-War-II central bank gold buying is already set to surpass the previous record set in 2018 (651 tons).

The COVID Excuse/Joke—So Convenient
Needless to say, the growing flight to gold by central bankers is and will be attributed to growing concerns about the latest COVID variant and its economic threat to financial security.

Rather than enter the rabbit hole of the COVID policy debate (fiasco) and its impact on markets, jobs, psychology, science, math, political courage or basic honesty, I’ll simply remind readers that the U.S. dollar’s threat to global financial security existed long before COVID arrived, as pre-COVID global debt ($250+T) to GDP ($85T) levels were already more deadly than a virus.

But again, rather than debate the disastrous results of shutdowns, debt expansions, monetary expansions and individual freedoms killed by COVID policy makers (rather than a convenient virus), I’ll avoid that math or those facts…

Negative Real Rates—No Joke at All
What’s not a joke, however, is the growing (yet unspoken) belief among increasingly nervous central bankers that inflation rates are going to continually outpace interest rates.

The evidence of declining real rates is particularly obvious in the U.S., where US 10-Year Real Rates (Real Yields) are breaking new lows: 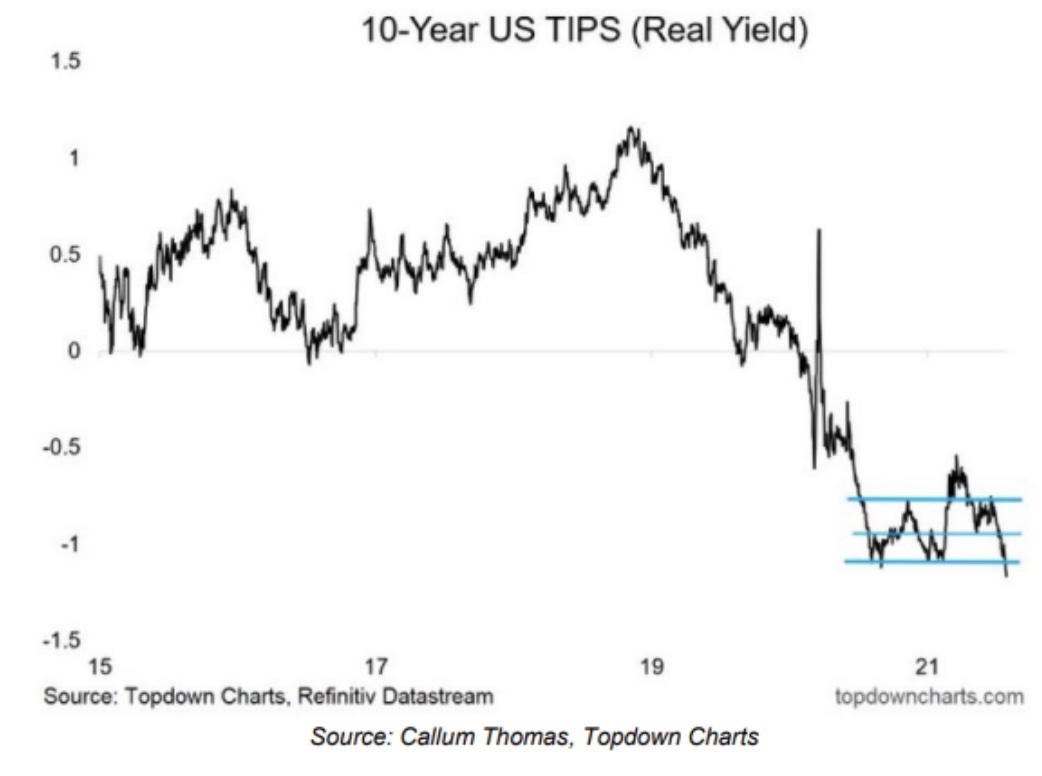 And toward this end, we don’t see real rates rising anytime soon. The trend is negative not positive.

Why are we so confident of this?

In fact, the level of negative real rates we are seeing since August of 2020 (-1.1) is just the beginning.

Those rates can fall far, far more toward the negative in the backdrop of global economies drowning in debt.

The Most Critical Market Force: Debt
Our confidence in growing inflationary trends as well as our disdain for central bankers attempting to describe the same as “transitory” is not a matter of intellectual pride but a simple consequence of common sense and blunt-speak.

The key to this common sense is accepting the historical as well as mathematical importance of one very singular yet powerful force: DEBT.

As we’ve underscored so many times before: Debt matters.

Once the ratio of national debt to national GDP crosses the Rubicon of 100%, economic growth becomes factually impossible.

What The Bankers Say and Do…
Even the not-so-honest central bankers know this.

This may explain why former Fed Vice Chair, Stanley Fischer, himself observed in 2019 that, “it would not take much of a shock to growth…for the debt ratio to balloon and spark concerns about debt sustainability.”

In other words, if Fed-heads were worried about a growth “shock” in 2019, they must be downright terrified today.

Stated even more simply, the central bankers are running out of time…

Actions Matter, and Are Predictable
So how can and will the central banks address the growing problem of “debt sustainability” (i.e., the ability to pay their bills/bonds)?

The answer is as obvious as it is both comical and tragic: They’ll create new fiat money out of thin air. You know, a bit more “accommodation,” “stimulus” and “QE.”

Imagine how much easier all our lives would be is we had a money printer in our basement and the legal right to use it?

In March of 2020, when stock markets tanked past the 30% level in the backdrop of rising rates/10-Year yields and rising COVID headlines, the Fed stepped in with a firehose of liquidity (trillions in “unlimited QE” and massively repressed rates) to triage the stock bleeding.

More “Stimulus” Ahead
Over a year later, with frothy markets now artificially “recovered” yet again thanks to itchy trigger fingers at the central bank money printers, the trillion-dollar question is: Will the Fed save this latest crop of top-chasing investors from yet another deflationary fall in the current market bubble?

My view is simple. I think figures like Stanley Fischer are dangerous abominations and architects of the greatest piece of financial fraud in the history of capital markets. Full stop.

But such opinions are ultimately irrelevant, because regardless of being stupid or dangerous, figures like Stanley Fischer are insiders with great power, and their words (and actions) are signals nevertheless.

This is especially true of Stanley Fischer, a former Governor of the Bank of Israel and Fed Board Member who is as “insider” as any “insider” can get.

In short, and like it or not, central bankers matter.

What we can therefore expect in the backdrop of the aforementioned “concerns of debt sustainability” boils down to more of what those central bankers and stimulus-addicted markets call “liquidity”—i.e., lots and lots of more printed/mouse-click dollars to come. 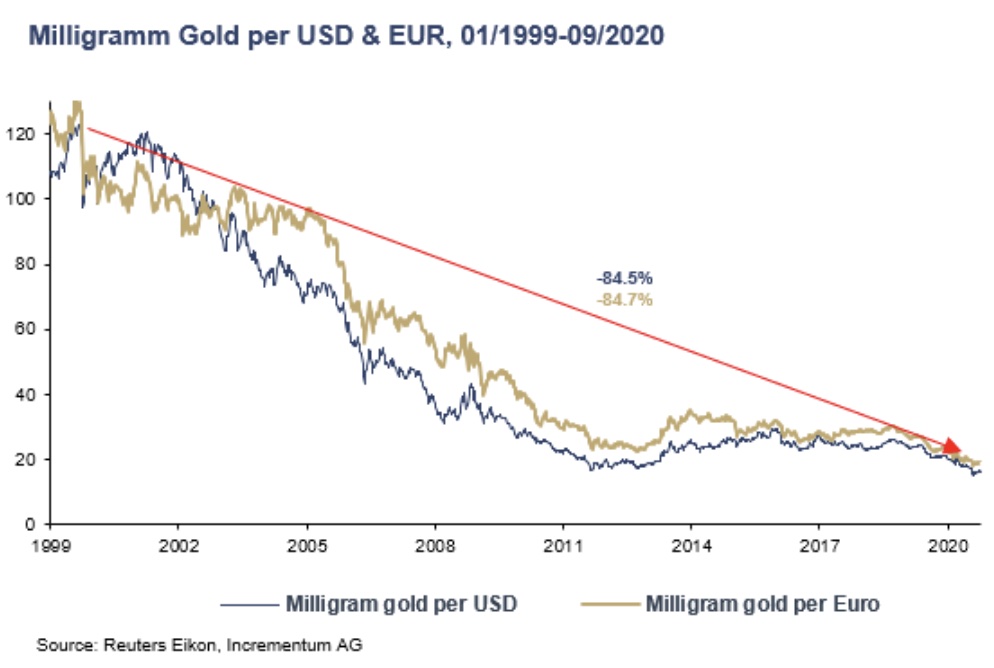 Think about that…This will link you directly to more fantastic articles from Egon von Greyerz and Matt Piepenburg CLICK HERE.