The Fed may surprise this week after gold and mining stocks see major upside reversals.

June 12 (King World News) – James Turk:  We should not underestimate the importance of what happened in several markets on Friday, Eric. I see it as a wake-up call that the precious metals and the shares of the companies that mine them are finally going to wake up from their slumber.

First, the importance of the big CPI increase cannot be understated. Investors are finally beginning to understand what the commodity markets are shouting. Inflation was never going to be transitory with central bank balance sheets expanding to the extent we’ve seen over the past few years. Note that July soybeans as one example of the inflationary pressures in the pipeline closed on Friday at a new high…

There is a lot of inflation baked into the system. And with the Q1 decline in GDP, the worry is that stagflation is here, which is not good for the major stock indices. So Friday’s slide in the DJIA and other indices is understandable.

Second, gold had a rare outside reversal to the upside. After opening lower, it fell below Thursday’s low price, in the process triggering sell stops under the market. But gold didn’t break down. Instead it kept climbing throughout the day as the CPI report began to sink-in with investors that inflation is going to get worse.

Third, there was an outside price reversal to the upside in the share price of a number of the mining companies, which is significant. But there is even something else that is just important, as we can see on this daily NYSE chart of Agnico Eagle. 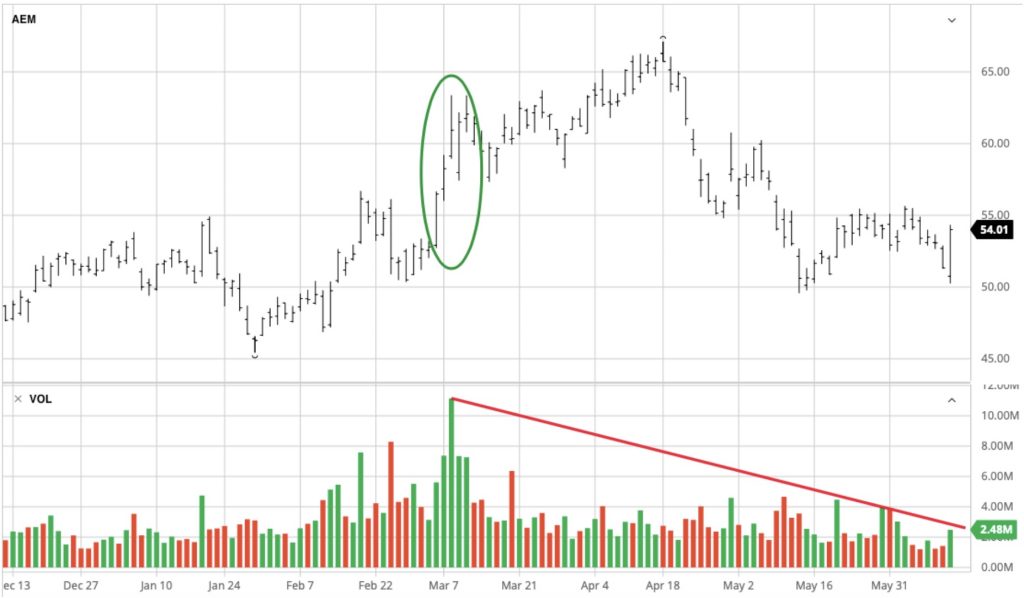 Even though the price rose 5.2%, volume was relatively small. That contrasts to the big price jump in March (the green oval on the chart).

Shares Of High-Quality Companies Now In Strong Hands
My thinking is that while the bids on Friday were aggressive given the big jump in price, few were willing to sell because the shares are in strong hands. These strong hands sense the higher prices that are coming, but this low volume is important for another reason.

With the major stock market indices heading lower on Friday, margin calls were no doubt issued and some investors were pulling in their horns. But those margin calls and other liquidation were not met by selling the mining shares, which were bought.

This week the Federal Reserve is meeting to discuss interest rates. They have broadcast that rates will rise 0.50% as part of their program to ‘fight’ inflation. They are so far behind the curve, that rate increase will do little to temper the inflationary expectations that are building.

.75% Hike?
So there are rumours that the Fed may raise rates by 0.75%, but I doubt that will happen at this meeting. It would change the way they have been guiding markets, and that would have a negative affect. It would also be an admission that the Fed is far behind the curve, and they want to avoid any loss in their credibility. It will be interesting to see what they say on Wednesday.