After recently hitting fresh 7+ year highs, the gold market has been consolidating gains but the downside risk is limited according to one analyst. Meanwhile, Europe is driving the rally in stocks, plus a look at market sentiment and real estate.

Downside Risk For Gold Limited
May 27 (King World News) – Ole Hansen, Head of Commodity Strategy at Saxo Bank: Gold testing support with bulk of recently establish longs are now under water. US dollar weakness having limited impact with XAUEUR down more on EU’s fiscal-stimulus proposal. The S&P500 is making a second attempt to break free of its 200 DMA > 3000. Support: $1690, 1665, 1640 (see below). 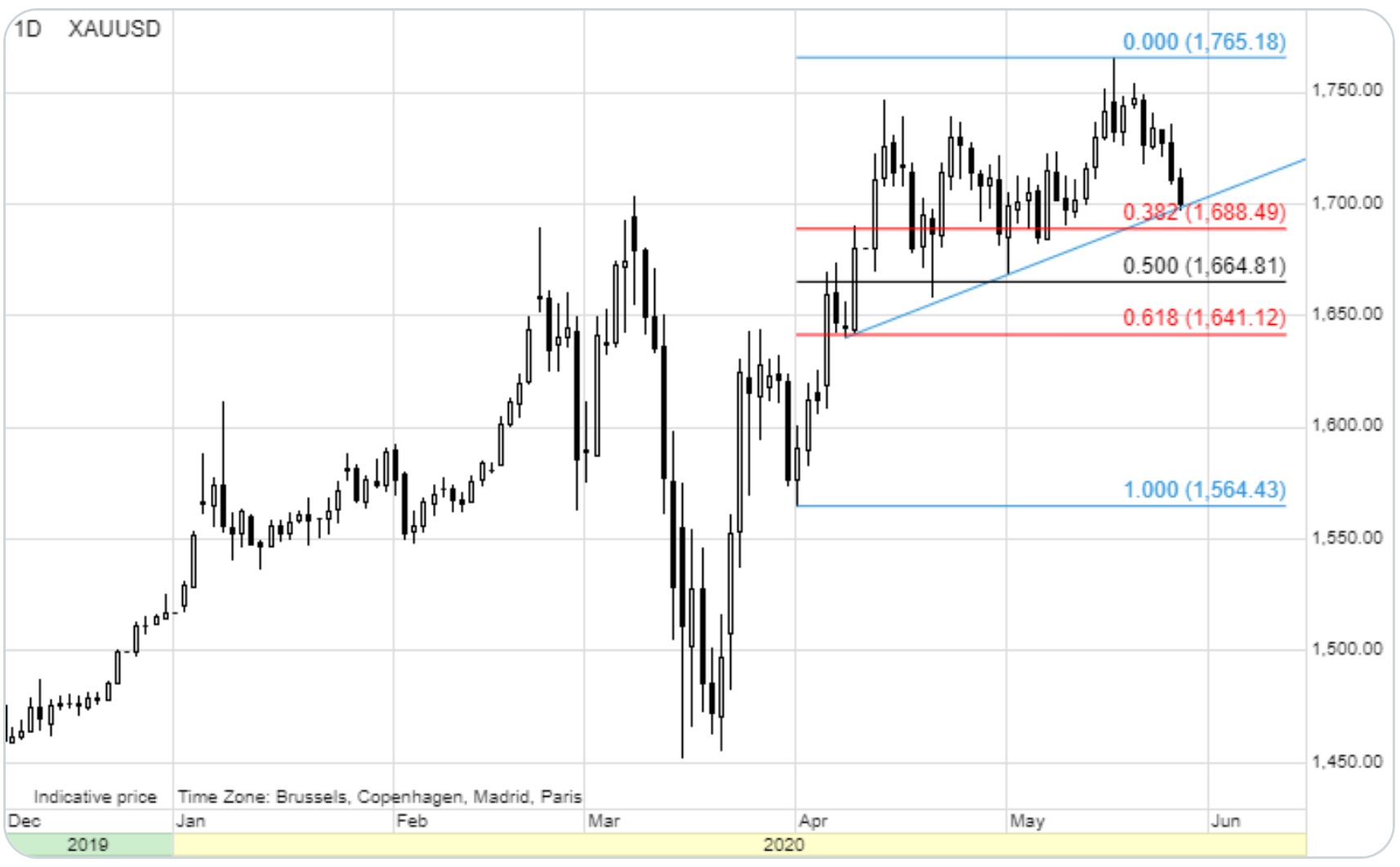 We see the downside risk limited to fund long liquidation, with limited short selling interest given the overall economic outlook and geo-political tensions.

Meanwhile, around the world…

Europe Driving The Rally
Peter Boockvar:  Today it’s the Europeans that are driving the equity rally. We haven’t said that in a while. In the works for weeks, a 750b euro borrowing binge by the European Commission will then get parceled out in grants (500b euros) and loans (250b euros) to individual states. Italy will get about 82b, Spain around 77b, France 39b to name a few. I’m not sure if any strings are attached as to how the EU countries can spend this money. As we can call this a massive increase in EU debt, the Germans have essentially agreed to finally a joint and several liability obligation within the entire EU, something they’ve tried to avoid directly for a while.

In response the euro is quietly back to $1.10 vs the US dollar which is the highest since late March. I’ll say this about the euro, for all the negative yielding securities, QE, sclerotic economies, political uncertainty and down trodden banking system, the euro has been trading in a $1.05-$1.15 range for about 5 years now outside of a jump to $1.25 in early 2018. That resilience might say more about the dollar than the euro and all of the dollar flaws as the largest debtor nation in the world.

While European and US equities are excited about the European stimulus, bond yields are little changed, copper is flat and oil prices are lower…

The currency the dollar continues to rally against is the yuan as the offshore spot rate is at the lowest level since September 2019 due to the growing worries about Hong Kong and expectations for sanctions. The Hong Kong dollar is little changed at the higher end of the band due to higher HIBOR rates relative to LIBOR. This said capital flight is obviously now a concern.

Sentiment
We finally have a 50 handle in Bulls according to Investors Intelligence. They rose to 50.5 from 49 and that is the 8th week in the past 9 seeing an increase. The mid February high for context was 54.7 before things changed. Bears fell for the 9th straight week and stand at 23.8 from 24.1 last week. II said this is the longest Bear losing streak since 1998. The spread between the two at 26.7 is the widest since February 26th. Bottom line, while not extreme, sentiment is getting extended and we can combine this with the Citi Panic/Euphoria index where ‘Euphoria’ is extreme. We’ll see tomorrow’s AAII read of the mood of individual investors and that has certainly been more muted, likely as they respond more to the economy than the direction of the stock market.

Real Estate
Purchase applications to buy a home continue higher according to the MBA. They rose 8.6% w/o/w and are now up 8.7% y/o/y with mortgage rates still sitting around record lows. This follows the upside surprise in April new homes seen yesterday. Notwithstanding the spike in unemployment, some are intent on taking advantage of low rates and owning a home, maybe instead of an apartment in an urban setting. Refi’s were unchanged w/o/w but still up 176% y/o/y. The mortgage market problems due to rising forbearance has more impacted refi’s as new home buyers are highly likely to not immediately request forbearance.