With the Dow tumbling 800 points and the NASDAQ plunging nearly 5%, gold and silver prices are seeing volatility as we move into the historically strongest trading month of the year, September.

Consolidation Continues
September 3 (King World News) – Graddhy out of Sweden:  “That’s starting to look like lower highs to me. (See chart below).

Have A Core Holding
Interesting green/white apex. As said at $1997, it looked short term tired. Looks like that old all-time high $1923 white line is a magnet here now. As said, we are looking at the very short term here and it is wise to have a core holding also.

Why core holding if it is good chance we get further IC (Intermediate Cycle) decline? Because 1) we do not KNOW if it will go down anymore from here, it looks that way, but if not and it just turns hard, one needs to be on the train, and 2) it’s a bull market, so surprises will come to the upside.”…

Gold Tests Support On Dollar Turnaround
Ole Hansen, Head of Commodity Strategy at Saxo Bank:  In our latest precious metals update from Tuesday titled “Precious metals pop higher as dollar extends slump” we highlighted the reasons for maintaining a positive outlook for precious metals. It was the day when the EURUSD challenged €1.2000 while US real yields where hitting fresh record lows.

In it we wrote:

“Gold is once again taking aim at the psychological $2000/oz level above which the price has only closed five times back in early August. The trifecta of dollar weakness, falling real yields and the general level of risk appetite should potentially already have seen it back above that level. Perhaps a sign that the period of consolidation may extend a bit further before the price eventually mount a challenge at $2000/oz and the next level of resistance at $2015/oz.”

Fast forward a couple of days and the dollar has reversed sharply higher with a record EURUSD long through futures starting to get squeezed. This after European Central Bank’s Lane confirmed that the bank was uncomfortable with a strengthening euro, thereby potentially signaling a line in the sand at €1.20. The dollar strength that followed has stopped the commodity sector in its bullish track with corrections emerging in crude oil, copper and some agriculture commodities.

With gold having failed to benefit from the mentioned tailwinds earlier in the week the short-term outlook could potentially turn a bit more challenging. Apart from tomorrows US job report, the focus will stay with the dollar and its short-term direction. On the euro, John Hardy wrote this in today’s Market Quick Take: “The big levels to the downside are the 1.1700 area range low (and notable Fibonacci retracement) and the absolutely critical 1.1500 area, which was a major cycle resistance on the way up and effectively the secular trend support. The price action could prove jumpy until the other side of the ECB meeting next Thursday, where the pressure is on for the ECB to act after a record low CPI print for August.”

As per the chart below the three lower highs is a concern and it may signal the need for a deeper correction as short term longs exit the market looking for better entry levels. The levels to look out for in terms of support are: 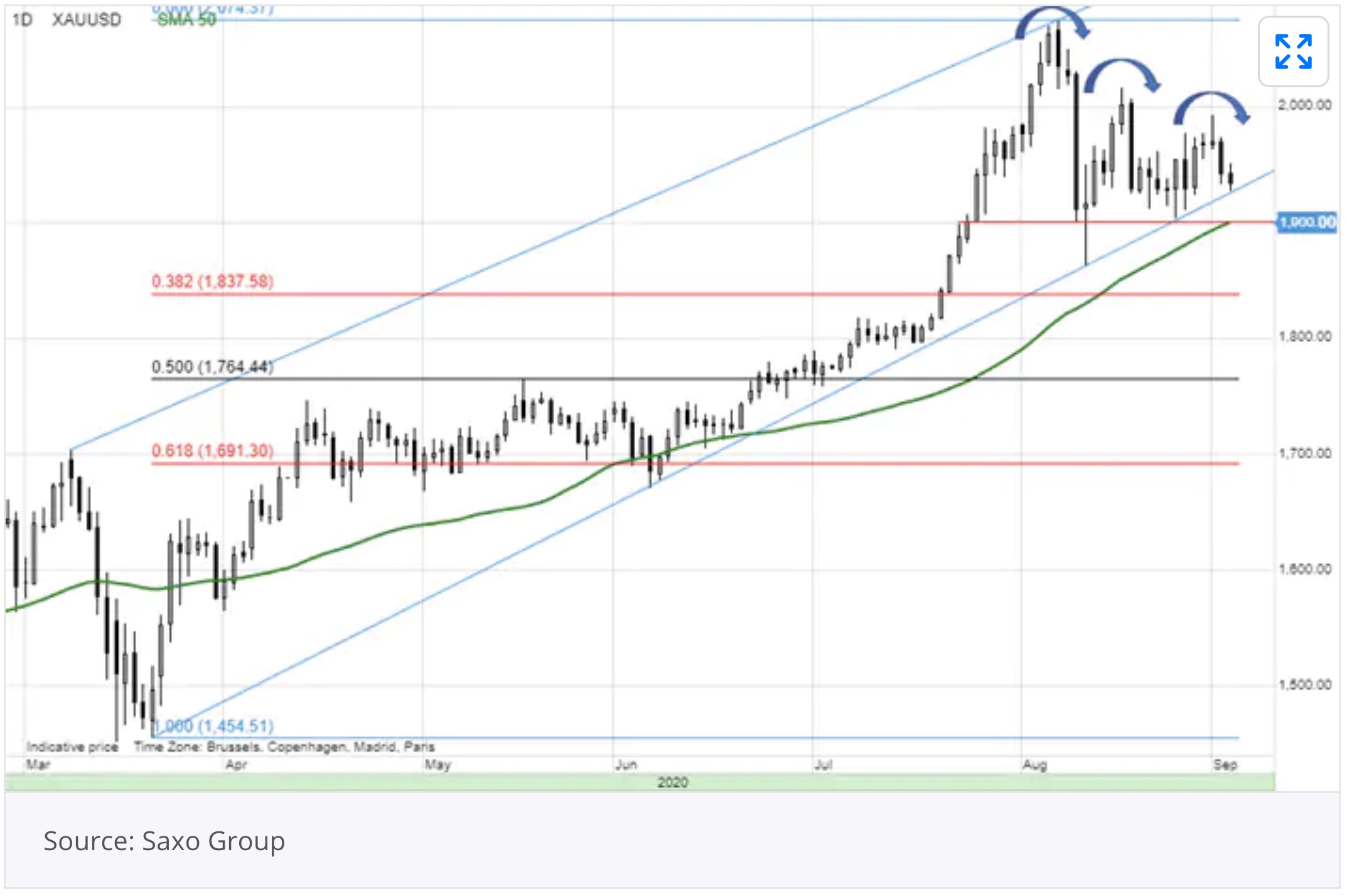 Summary:
Gold and with that also silver have reversed lower following the dollars abrupt turnaround on Tuesday. While the long term outlook remains supportive, the short-term technical outlook has deteriorated with three lower highs pointing to a loss of momentum. We take a closer look at the levels to look out for in gold and given the current importance of the dollar also the levels in EURUSD.

This Is Rare
***ALSO JUST RELEASED: This Is Rare – Everyone Around The World Should Be Watching This Right Now CLICK HERE.

This Is The Next Key Level For Gold, Plus Consumer Confidence, Monetary Policy And Real Estate