Demand for hard assets remains strong. Plus a look at more stunning charts as central banks turn hawkish in the face of alarming energy prices.

Central Banks Threaten More Interest Rate Hikes
August 29 (King World News) – Peter Boockvar:  It wasn’t just Jay Powell who talked tough in JH, European central bankers did as well and why we’re seeing another round of selling in global bonds. Over the weekend Olli Rehn, a Governing Council member of the ECB, said:

“The reality is that we have excessively high inflation globally, also in Europe – that’s why it’s action time. The next step will be a significant move in September, depending on the incoming data and the inflation outlook…We have a severe energy crisis in Europe…it’s quite likely that the euro-zone economy is slowing down. It’s slowing down as we speak.”

And which they’ll be hiking into, and also to stop the euro from its continued depreciation which they are now not happy about. So, a 75 bps rate hike is now on the table for the ECB. Governing Council member Kazaks said as such:

“The increase needs to be strong and significant, and at the current moment, I would say 50 or 75 bps.”

Even Thomas Jordan is talking tough, the head of the Swiss National Bank, who is saying that higher inflation might now be structural. This, even as he still has rates below zero.

“Structural factors such as the transition to a greener economy, rising sovereign debt worldwide (me: that central bankers encouraged), the demographic transition and ultimately also the fact that globalization appears to have peaked – at least temporarily – could lead to persistently higher inflationary pressure in the coming years.”

They next meet in the 3rd week of September and he’s clearly laying the groundwork for another rate move, most likely into positive territory. “There are signs that inflation is increasingly spreading to goods and services that are not directly affected by the pandemic or the war in Ukraine. In fact, it appears that in the current environment, higher prices are being passed on more quickly, and are also being more readily accepted, than was the case until just recently.”…

Yields Rising
In response, the German 2 year yield is jumping by 13 bps to 1.11%, nearing its mid June high. 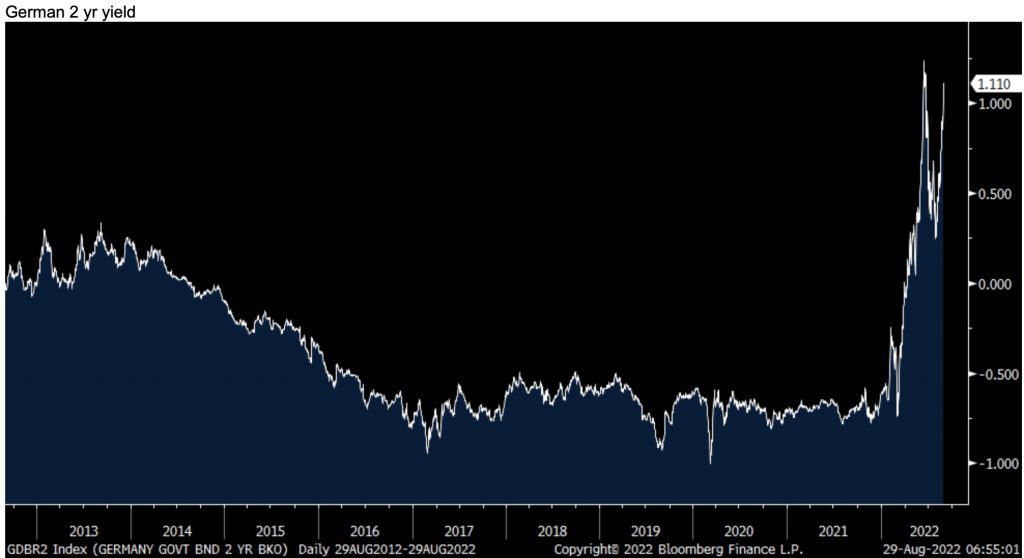 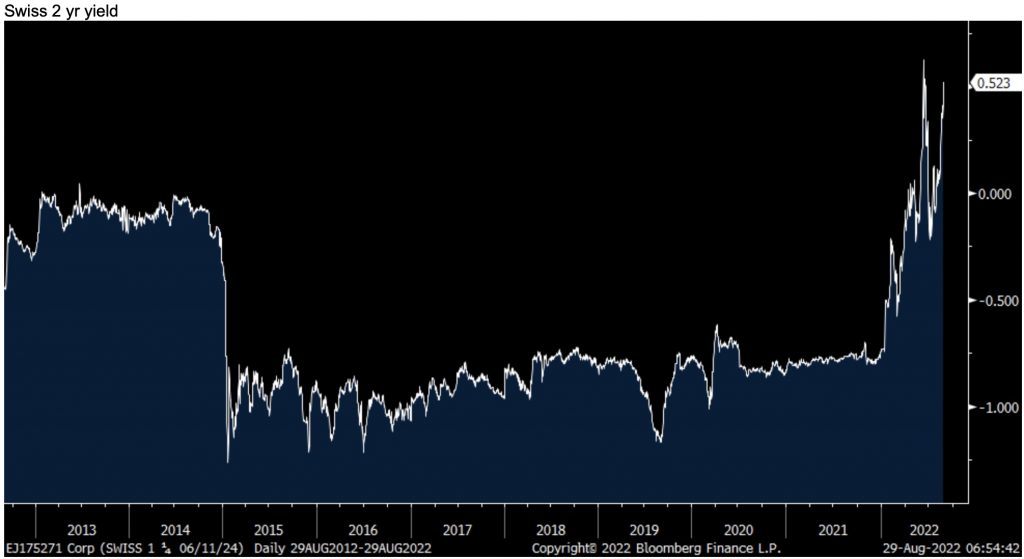 The selling in global bonds actually started in Asia as the 10 yr JGB yield AGAIN is testing 25 bps even after Kuroda said AGAIN that he’ll be as easy as possible. South Korean yields jumped too as the head of the Bank of Korea hinted at the possibility of another aggressive hike at their next meeting.

Are you still only looking at US growth and inflation expectations in making a call on US Treasuries?

With regards to Kuroda and the BoJ, he remains the outlier as he said:

“We have no choice other than continued monetary easing until wages and prices rise in a stable and sustainable manner.”

He’s been saying this now for 10 years. If he was in the private sector, he would have been fired many years ago. The yen is now approaching 140 again vs the dollar.

Yen Continues To Weaken vs US Dollar 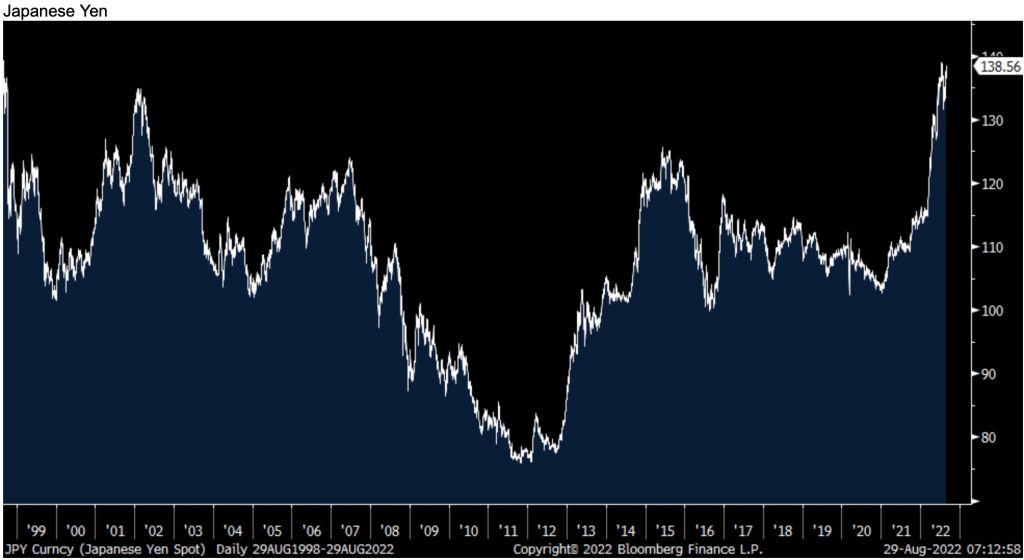 Alarming Energy Prices
With respect to the alarming level of European energy prices, after spiking by another 24% last week, the TTF price of natural gas is lower by 13% as it just might seem the Europeans could get to the 85% storage capacity that they are shooting for. 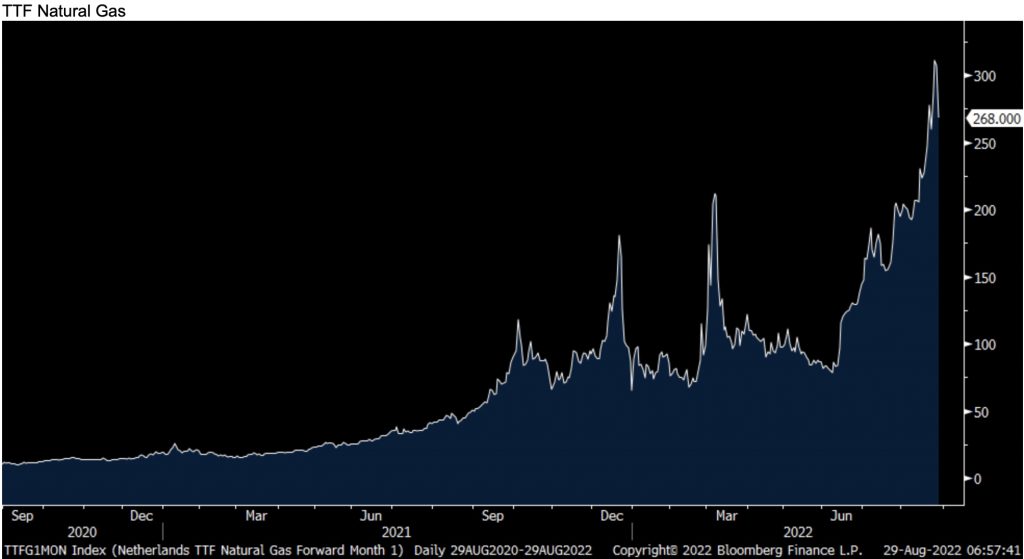 Also, we are truly seeing demand destruction, particularly from German industry, along with fertilizer producers (which of course creates its own problems for food prices) that are shutting in production. German power prices 1 year forward were up a shocking 70% last week but are lower by 14% today. 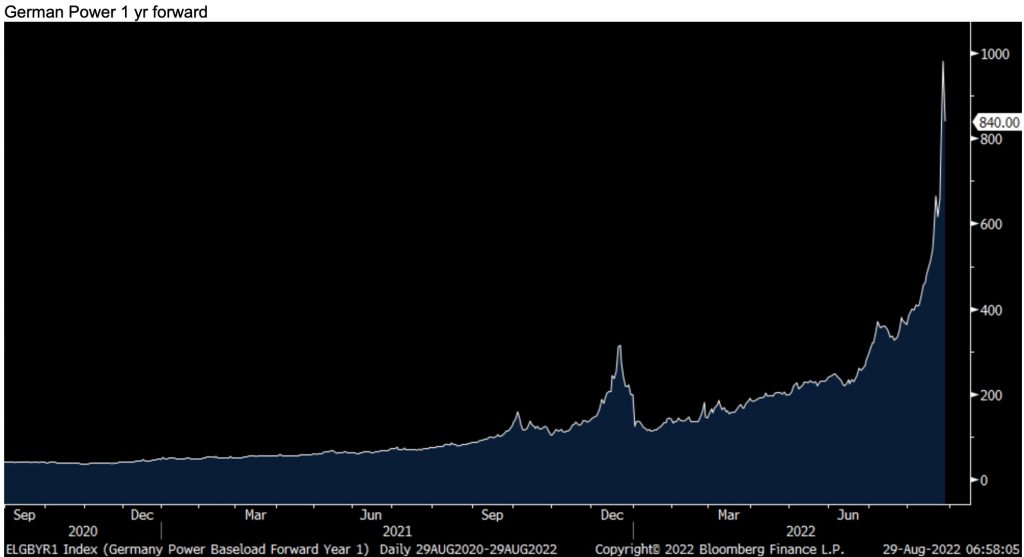 A stat I read on Friday from the European Commission, mentioned in the WSJ, that in Europe, companies with under 250 employees make up around 99% of EU businesses and more than half of GDP. They of course, along with European households, can handle this energy disaster the least.

The UK also announced that the cap on electricity bills will rise to 3,549 pounds in October from the current level of 1,971 pounds. At current spot rates, this could go above 6,000 pounds next year if things don’t change. Last October, the cap stood at 1,277 pounds. Truly alarming figures for those lower income families, let alone UK businesses. The UK 5 yr inflation breakeven is higher by 8 bps to 4.79%. It got as high as 5.05% in early March.

I will highlight again my worry that the direction of corporate earnings, with threat to profit margins, should be the next concern. With Q2 reporting season basically over, here is a fresh chart of earnings estimates for 2022. They stood at about $230 heading into the reports and now are under $227. 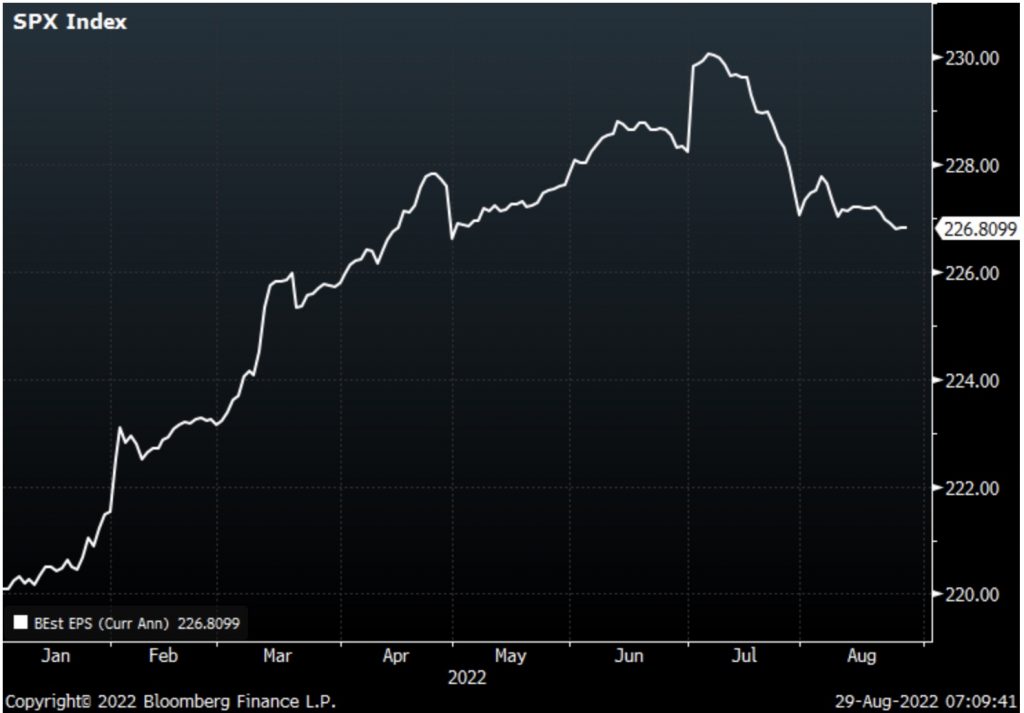 Demand For Hard Assets Remains Strong
Finally, the demand for hard assets in this inflationary environment remains strong. A gem mint 1952 Topps Mickey Mantle was auctioned over the weekend for $12.6mm (includes buyers premium). That is the most expensive piece of sports memorabilia ever paid for.

ALSO JUST RELEASED: Greyerz – The US Economy Is Crashing But The Global Collapse Will Be Even More Terrifying CLICK HERE.

Richard Russell – Buy Physical Silver Ahead Of The Coming Chaos