With global markets continuing to experience wild trading in the aftermath of the historic Brexit vote, here is a quick update on the war in the gold and silver markets, the latest end of quarter rumors, plus gold, silver, Brexit and more.

First, a quick update on gold and silver…

Despite the recent surge in the price of silver, which hit fresh 18 month highs, for those wondering about sentiment, we still don’t see Excessive Optimism in the silver market (see chart below): 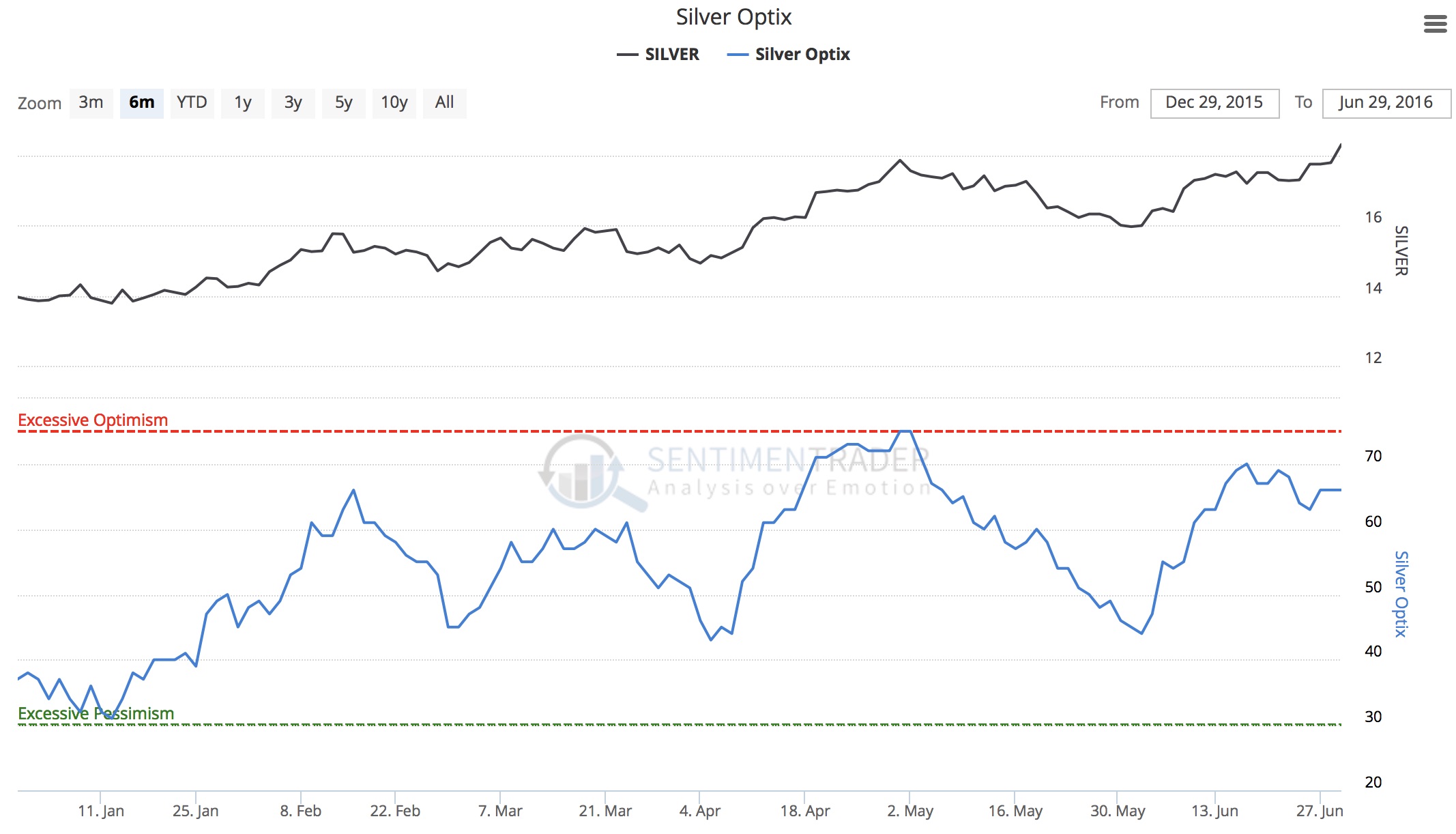 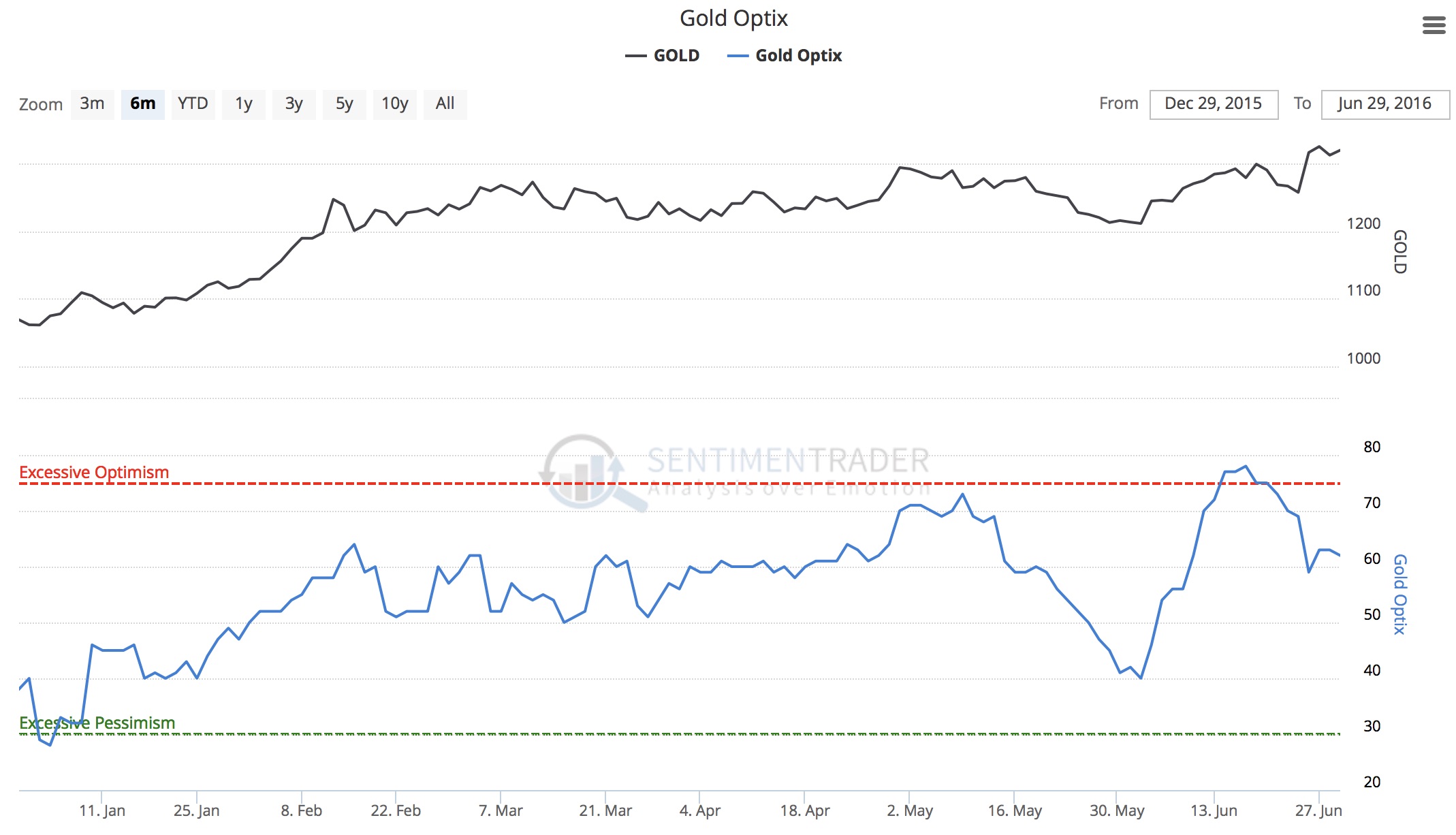 What does it all mean?  The current sentiment levels in both gold and silver reveal that there is still a nervous feeling among some investors and traders.  But this is what bull markets do, they climb a ‘Wall of worry.’  I have continually reminded readers that in bull markets almost all of the surprises are on the upside.  And yes, the “Leave” vote that sent the prices of gold and silver surging to new highs certainly falls into that category.  It will be interesting to see how the metals trade in the days and weeks ahead.

A portion of today’s note from Art Cashin:  End Of Quarter Rumors – An Asset Allocation Rebalance – The floor has been abuzz for several days about a special rebalance that could take place on the close today.

The theory runs something like this: The huge rush into bonds and concurrent selling of stocks that followed the Brexit vote has distorted the portfolio ratios of pension funds and insurance companies.

If true, they would need to rebalance those portfolios by selling bonds and investing the proceeds in stocks.

The hypothesis hit around Monday afternoon at the worst of the Brexit reaction. At that time, the needed rebalance was guessed to be around $10 billion. Since then, stock losses have shrunk as have bond prices so the assumed imbalance would be smaller. So, late today we will watch to see if stock and bond markets show any signs of such a swap.

End Of Quarter Rumors – China’s Petroleum Reserves – For much of the month of June, there have been claims that the Chinese Strategic Petroleum Reserve was approaching full capacity. Claimants say the reserves will top out between the end of June and the middle of July.

If that is true, we should see a quick impact on the crude markets since the claimants say that the reserves were sopping up hundreds of thousands of barrels daily. Is it true? Either way, we’ll know very soon.

Soros Warns Of Grave Consequences Of Brexit Vote – George Soros said the Brexit vote would ultimately “sorely test” the European banking system. He also warned that Europe could easily slip into a “deflationary trap” as the Brexit move is finally implemented.

Overnight And Overseas – Asian markets generally saw mild gains in more moderate volume. Shanghai was the odd man out, showing a small loss at the close.

European markets are modestly higher as they weigh the political shuffling in London as the race to succeed Cameron begins.

The dollar is a touch softer again as is gold. The key difference is a dip in the crude price, which may limit equity gains. Bond yields are flat.

Consensus – We expect the stock market to continue to follow the moves in the oil market. Battle for a new prime minister may prompt an off-hand comment or Article 50.