Here is an update as fears continue to mount about the coronavirus, plus a look at gold, China, and commodities.

January 29 (King World News) – Ole Hansen, Head of Commodity Strategy at Saxo Bank:  “Eye catching headlines like this one from CNN Business does nothing to promote gold as a respectable investment:

“Gold heading to $2,000? Prices surge on global fear” For two days it has tried but failed to rally despite overwhelming support from developments elsewhere.

Gold trades lower on the week despite the return to negative real yields, global neg. yielding bonds jumping by $2.3 trillion since recent low and U.S. stocks delivering the biggest two-day drop since October.

When general risk off pressure reigns gold will struggle due to its already elevated long through ETF’s and futures. Headlines like the one mentioned has once again dragged short term bets into the market which has now resulted in long liquidation.

I’m bullish gold through 2020 but for different reasons than the one currently playing out. Unless we are witnessing a Chernobyl bulls need to be patient. S/t risk of a correction back to $1560/oz with the critical level being $1535/oz. 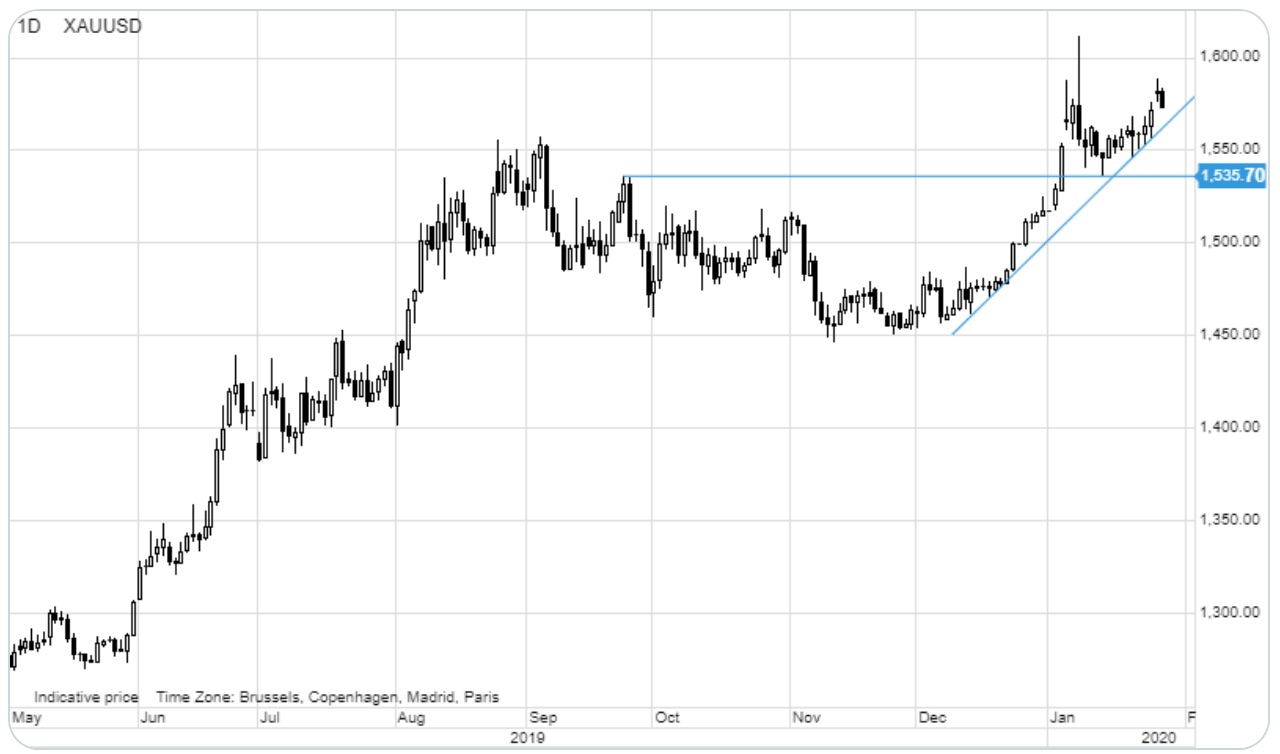 Coronavirus Fears, China And Commodities
While the coronavirus continues to the spread both in and outside China the market is trying to adjust positions across all asset classes. Since October investors have poured billions of dollars into the stock market and other riskier assets in the belief that the U.S.-China trade deal and ample central bank liquidity would support a period of rising asset prices and low volatility.

Another China-born virus put an abrupt end to this outlook with traders and investors having worked overtime this past week to limit exposure. Stocks, especially those in emerging markets have sold off while secure government bonds, led by U.S. treasuries, and safe haven currencies such as the Japanese yen have both received a bid.

Commodities, most of which depends on global growth and demand, have been caught in the crosshairs of these developments. Not least considering China being the world’s biggest buyer of most commodities from crude oil and fuel to copper and iron ore. Since January 20 when the Chinese Premier Xi Jinping finally issued his official instructions on dealing with the outbreak the Bloomberg Commodity Index has fallen by 4.7% while the energy heavy S&P GSCI is down by 6.7%. 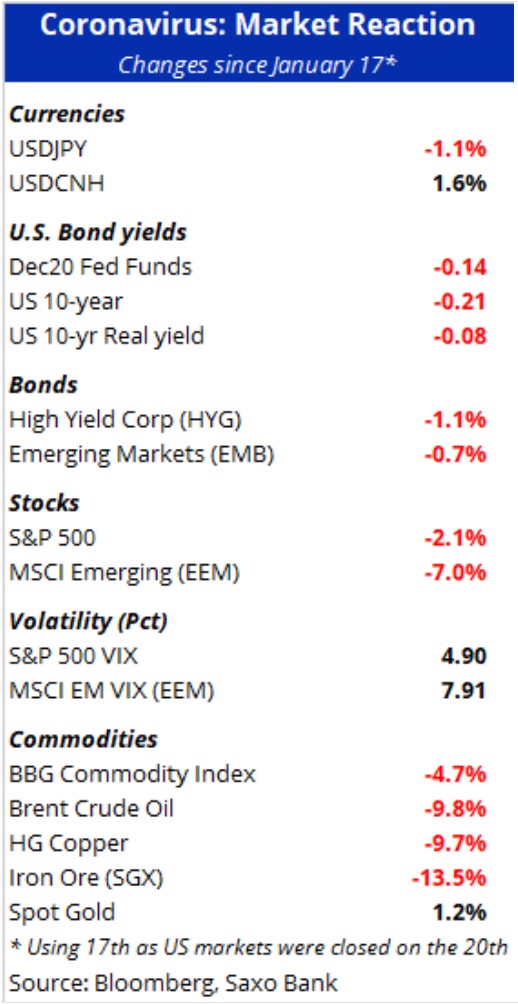 Crude Oil
Brent crude oil’s six-day drop from $66/b to $58.5/b yesterday was probably accelerated by hedge funds cutting bullish bets. Since early December when OPEC+ extended and deepened production cuts and up until January 21 hedge funds had bought close to 100 million barrels of Brent crude oil. They were left completely unprepared by the sudden change in focus from potential disruptions in Libya and the Middle East to the coronavirus impact on demand for fuel.

Having reduced exposure and after finding support ahead of the October low a $56.50/b we may now have seen the worst part of this adjustment phase. S&P Global Platts Analytics is forecasting a drop of 200,000 b/d in oil demand for the next two to three months. If however the coronavirus is as bad as the SARS outbreak in 2003, they see oil demand falling by 700,000-800,000 b/d, reflecting more than half of the expected demand growth for 2020.

Should the market manage to stabilize over the coming days some attention may return to Libya  where the nation’s output could be days from grinding to a complete halt. This according to the head of the National Oil Corp and it comes in response to an escalating crisis which has cut oil production and closed export terminals.

OPEC, increasingly frustrated by the latest slump, stands ready to support the price through extending and potentially making even deeper cuts. For now the market will remain nervous about any further escalation in China and beyond. From a technical perspective support as per the chart below is $58/b followed by the October low at $56.15. In order to attract renewed demand it first need to reclaim $60.50/b. 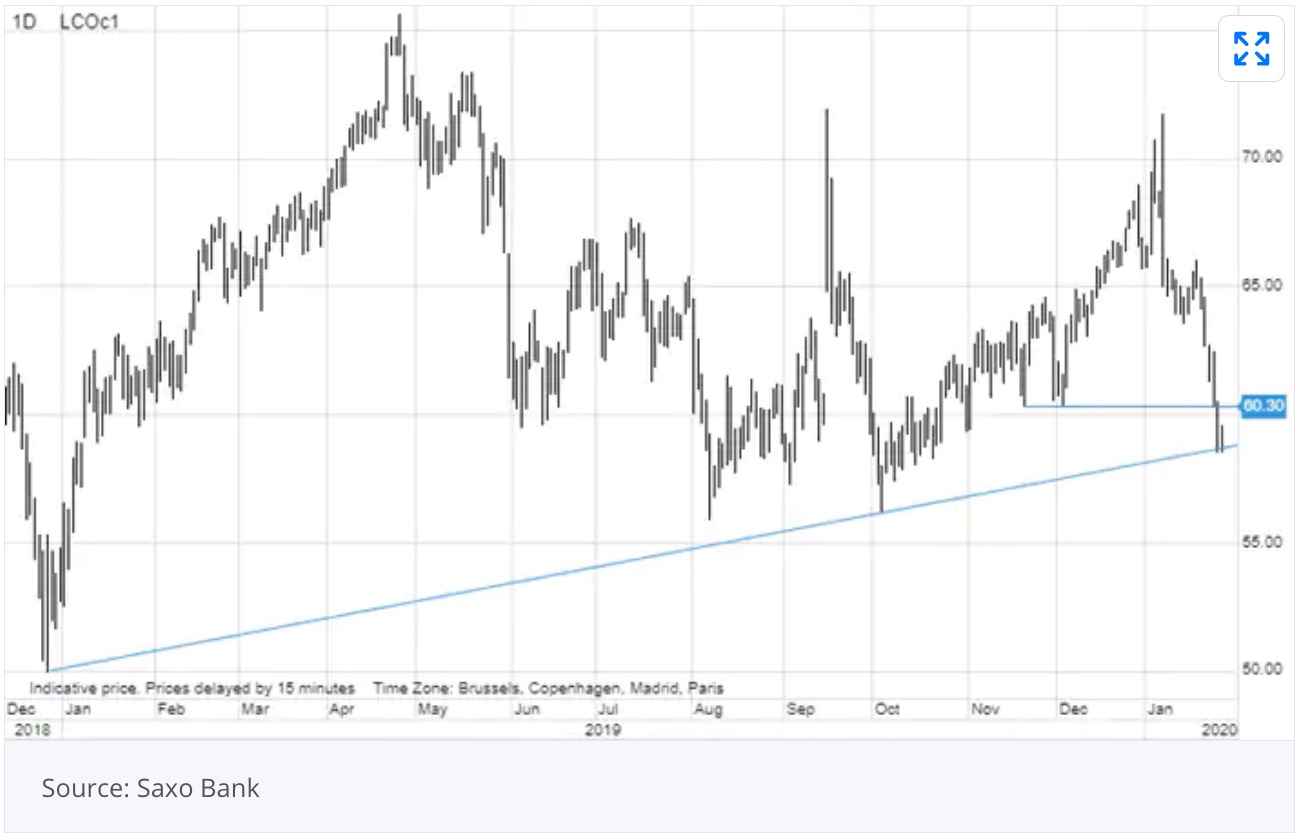 Gold
Gold’s safe-haven credentials received another boost this past week when the virus threat sent the price higher to $1588/oz. However despite overwhelming support from developments across other markets it failed to challenge the January 8 high at $1611/oz. It highlights the extend to which the action so far this week has been all about cutting exposure. With investors already holding an elevated long position through futures and ETF’s the need to reduce across markets exposure probably led to this slightly disappointing development.

Overall this past week we have seen gold being supported by U.S. 10-year real yields falling to negative 0.05%, rising expectations for a U.S. rate cut, total global negative yielding debt jumping by $2.3 trillion and the biggest two-day sell-off in U.S stocks since last October. Against this the dollar has with the exception against JPY and CHF been strengthening thereby creating some headwind.

Gold’s lack of reaction to an overwhelming bullish environment has left a few nervous longs looking for the exit. While we maintain a long-term bullish outlook for different reasons than the current in 2020 the market may once again be exposed to a small correction. Especially if the U.S. stocks, led by decent earnings from the technology companies this week continue to recover. Support below at $1560/oz followed by $1535/oz. 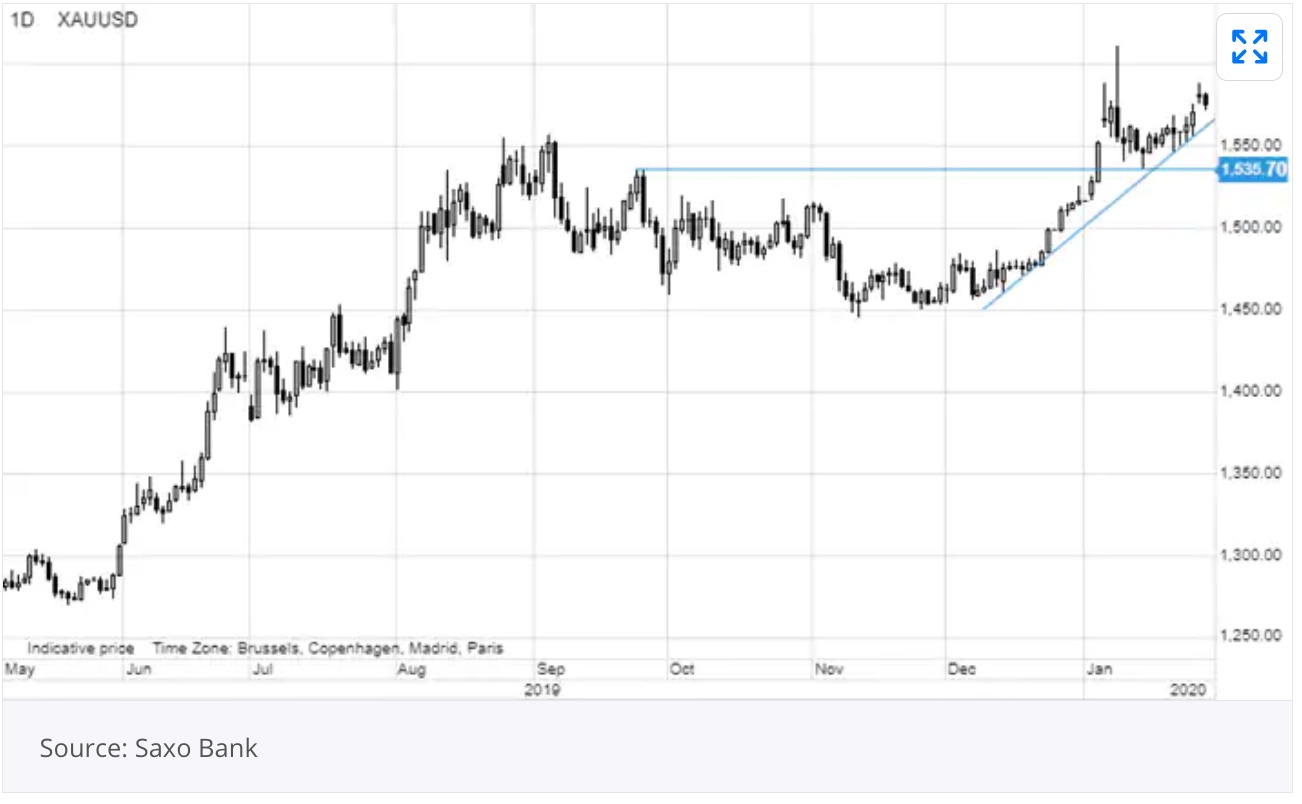 Copper
HG copper’s near 10% plunge during the past week highlights not only the impact China has on demand for industrial metals, but also its role as one of hedge funds’ favorite macro plays on China developments. The eight-day plunge from close to $2.9/lb back below $2.6/lb is one of the longest ever for the white metal and it has been driven by short-selling interest from funds looking for a hedge against the potential economic fallout from the coronavirus in China and abroad. Any further weakness could see copper move close to the 2018-19 area of support below $2.55/lb.

China’s ability to deliver on its phase one trade deal commitment to buy energy and agriculture products has also been called into doubt. As a result the price of soybeans has slumped back to levels seen before the trade deal was agreed. Coffee meanwhile has suffered due to an extended long not receiving any support from a weaker BRL and a rising contango which provides short-sellers with a premium at each futures roll.

Summary:
Commodities, most of which depends on demand from China, have been caught in the crosshairs of coronavirus developments. We take a closer look at the impact on key commodities from crude oil and copper to gold and soybeans…

John Awde:  “Eric, I just see so much value here.  Where GSV is trading at now is where it was when we brought Goldcorp on to buy their initial 9.9% stake.  And since Goldcorp has invested there have been a number of significant discoveries and de-risking events that have happened, and we’ve raised almost $100 million since then.  So I felt it was a great time to own more stock and increase my holdings of Gold Standard.  The first vice president of exploration for Gold Standard always said the first discovery is the hardest to make, but once you find that first one there is likely to be a series of them.

But in terms of exploration, we have identified a number of areas on the project that we think can be the next Dark Star.  Another catalyst for the company is the revised PFS, which is due to be released in the next two or three weeks.  Also, Eric, we think we are on the cusp of finding a deep sulphide feeder underneath Dark Star which also has the potential to be a game-changer.” Gold Standard Ventures, symbol GSV in Canada and the US.

Fed To Cut Interest Rates Today, Plus This Just Tumbled To The Lowest Reading Since 2015!