On the heels of some fierce trading this week in the dollar, gold and silver, below is an extremely important update on the war that is raging in the gold and silver markets, plus a bonus note on the surprising and key events from this week.

Commercial Short Positions In Gold Near All-Time Highs
King World News note:  Below you can see the commercial hedgers have added aggressively to their short positions in the gold market this week, as you can see from the chart below.  That does not mean that the price of gold cannot continue heading significantly higher in the short-term, but it does raise a caution flag. 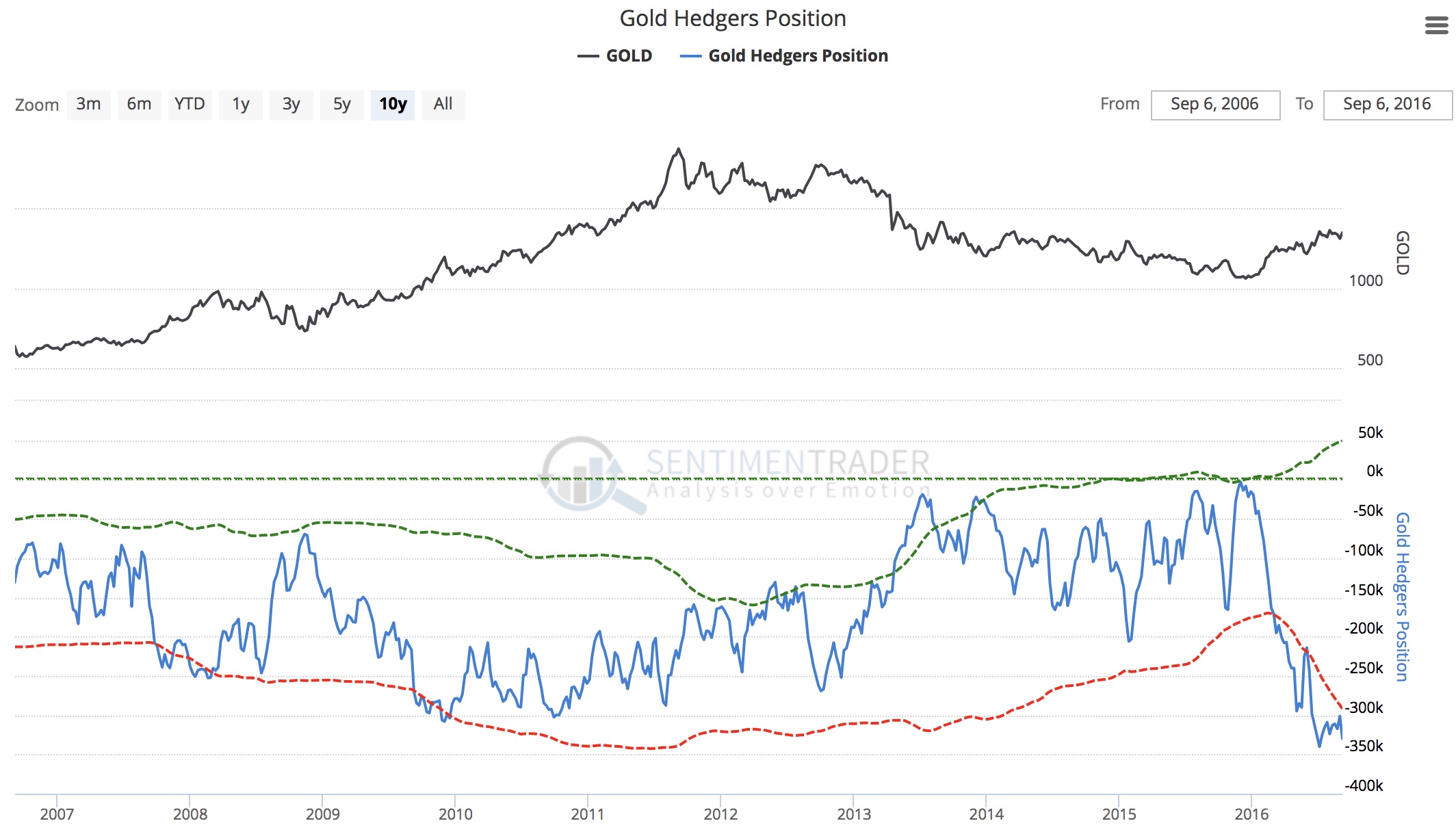 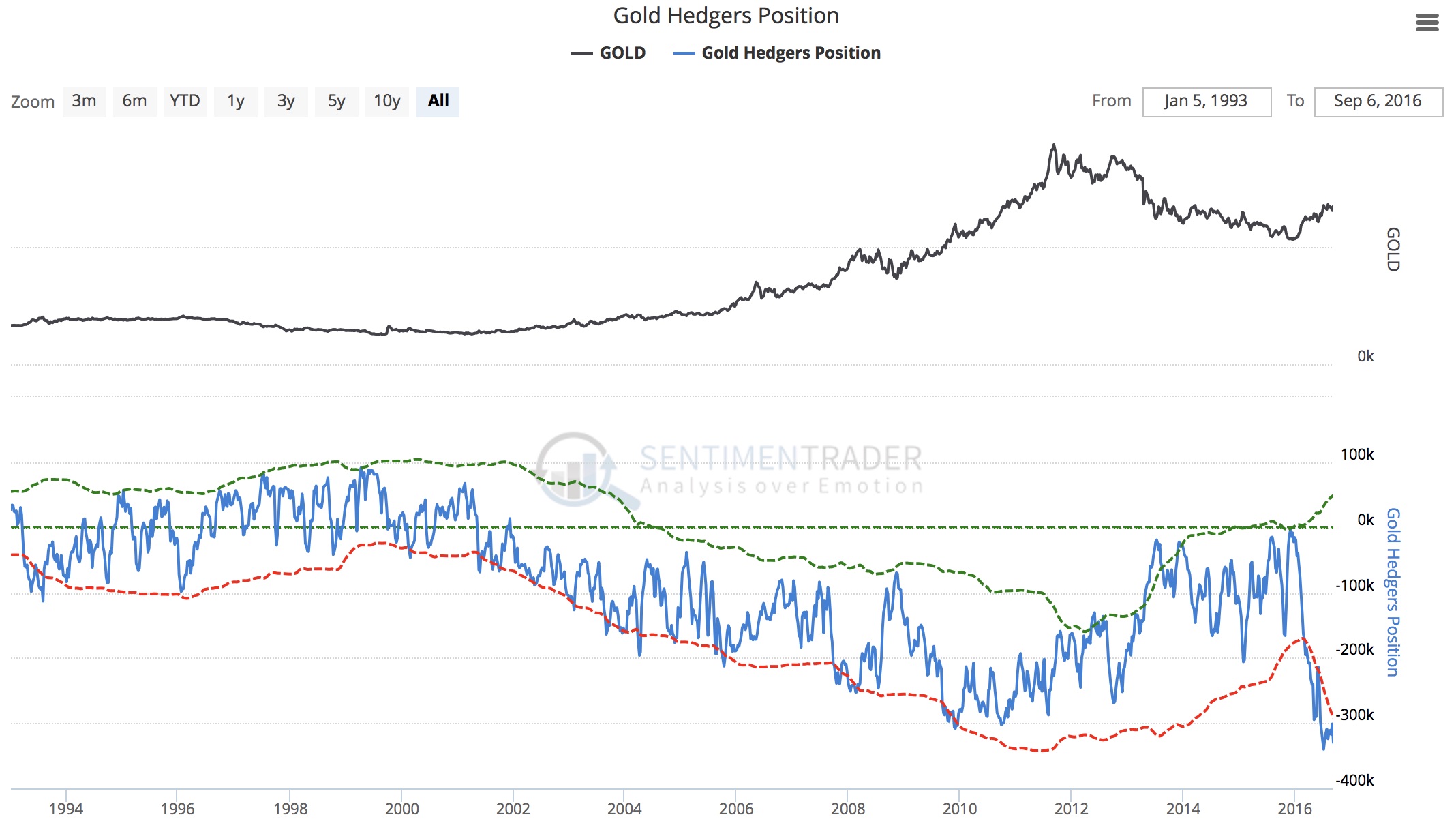 Commercial Short Positions In Silver Near All-Time Record High!
King World News note:  Below you can see the commercial hedgers position in the silver market market also remains near all-time highs in terms of their overall shorts (see 23-year chart below). 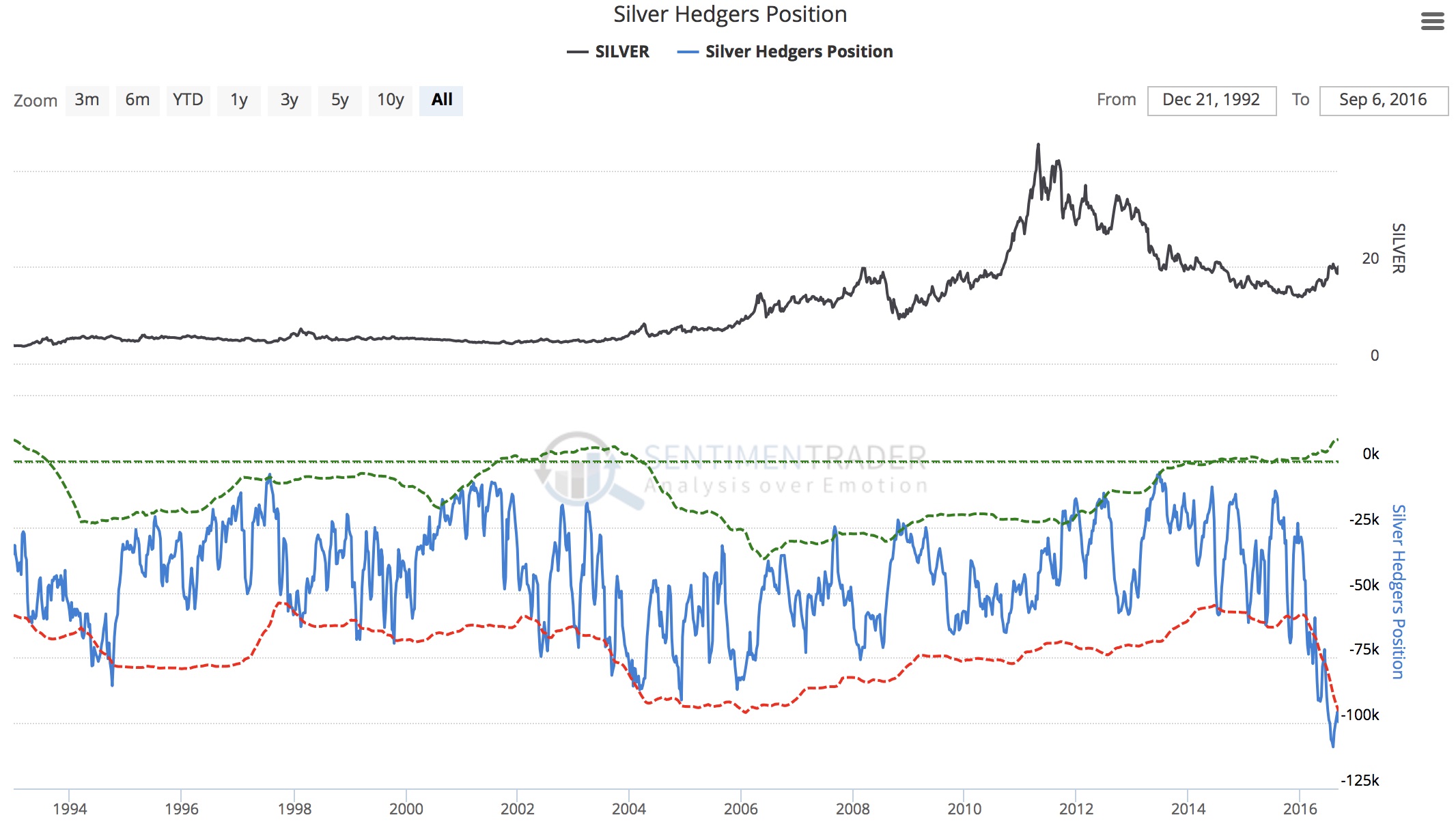 Succinct Summation of the Week’s Events:

1)July saw a new record high in the amount of US job openings. They totaled 5.87mm in the month, about 240k more than expected and up from 5.64mm in June. The level of hiring’s rose to a 4 month high but are 63k below that March level when there was 200k less job openings. This again points to the supply side (or lack thereof) of the labor market remaining a drag. The amount of those quitting their jobs was basically flat m/o/m and the quit rate at 2.1% was unchanged but holding at the average seen year to date.

4)In China, CPI in August slowed to a rate of gain of 1.3% y/o/y, down from 1.8% in July and below the forecast of 1.7%. It’s the slowest increase since October but was SOLELY driven by a sharp slowdown in food price increases. They slowed to 1.3% y/o/y from 3.3% in July. Non food prices were unchanged at 1.4%. PPI fell .8% y/o/y which is the least negative in two years as commodity prices have stopped falling and comparisons get much easier.

5)Chinese exports in August were lower by 2.8% y/o/y but that was a bit better than the estimate of a drop of 4%. With a weaker yuan, exports rose by 5.9% in yuan terms. Exports to the US were flat y/o/y, mixed to Asia and up 2.4% to the EU. On the import side in dollar terms they rose by 1.5% y/o/y which was well better than the forecast of a decline of 5.4%. That is actually the first increase since October 2014. I don’t know whether this is due to a crackdown on fake invoices or something else but imports from Hong Kong ‘only’ rose by 14.3% y/o/y. I say ‘only’ because they were up by 123% in the month prior. UK imports were up 26% y/o/y thanks to the weaker pound.

7)PMI’s in Hong Kong, Singapore and India were up m/o/m.

8)Regular pay in Japan in July rose .4% y/o/y, modest but an improvement from no change in June and it’s the best print since March.

1)Air is seeping out of the epic global bond bubble that may have saw its final blow off right after Brexit. This leaking started in Japan last month when the BoJ started buying less longer term debt over worries with what they were doing to the yield curve. We then can move to the ECB and worry that they are running out of bonds to buy and even if they expand, they will clearly be stretching. The Fed may raise in September but the 2 yr note yield is FLAT on the week notwithstanding comments today from Rosengren. Long end Treasury yields though are following JGB’s and European’s sovereign bonds higher. As for the BoE, the 10 yr gilt yield has gotten back all of what it lost post Brexit and then some and is at a two month high. We are all in this bubble together and what goes around will come around to us all. Calling the end of the bond bull market we know has been a fools game for MANY years. However, if you put aside your thoughts on growth and inflation which have been the two main factors for all the “bull market is over” calls over the years and just look at the logistical limits being reached by central banks, I believe it can be called more accurately now.

2)The ISM non manufacturing index for August was weak, falling to 51.4 from 55.5 in July and that was well below expectations of 54.9. This is the worst print since February 2010 when it was at 50.8. New orders sunk by 9 pts to just above 50 at 51.4. Backlogs fell back below 50 at 49.5 vs 51 in July. Employment was barely above 50 at 50.7, down .7 pts. Export orders (only some service co’s report exports) plunged by 9 pts to 46.5. Of the 18 industries surveyed, just 11 saw growth vs 15 in July. The ISM said “the majority of the respondents’ comments indicate that there has been a slowing in the level of business for their respective companies.”

3)The Fed creation called the Labor Market Conditions index was negative for the 7th month in the past 8.

4)After the inventory destocking we saw in Q2, wholesale inventories were again flat in July vs the estimate of a rise of .1%. Because sales fell by .4% instead of rising by .2% as forecasted, the inventory to sales ratio rose to 1.34 from 1.33. In particular, the I/S ratio for auto’s rose to 1.84, matching the highest level since May 2009.

6)German Exports dropped by 2.6% m/o/m, well worse than the estimate of up .4%. Exports to the EU were in particular weak and is likely in response to the initial post Brexit panic attack. Imports also dropped by .7% instead of rising by .5%.

7)The German July IP figure was soft. Production dropped 1.5% m/o/m, well below the estimate of up .1% and the y/o/y decline was 1.2%. This was only partially offset by a three tenths upward revision to June.

9)The manufacturing component of French IP was down by .3% m/o/m vs the estimate of up .7%.

10)In the immediate response to the UK vote, July UK manufacturing IP fell .9% w/o/w, three times the estimate while the y/o/y increase was .8%, about half the estimate. The August data seen so far has improved.

11)Chinese FX reserve stash fell to $3.185T in August from $3.2T in July. That was below the estimate of $3.19T and is the smallest slush fund in almost five years. This pile was over $4T two years ago.

***Also just released: Stocks Tumble, Along With Crude Oil And Bonds But This Is Even More Important CLICK HERE.