Protesters in China have force the government to back down on COVID restrictions. This has been a relief for markets across the globe.

Mid Day Update
November 29 (King World News) – Art Cashin, Head of Floor Operations at UBS:  So far stocks have waffled back and forth in a relatively narrow range above and below the unchanged line.  I think that suggests we have reached a indecisiveness among traders.

The chatter is beginning to focus on Powell’s appearance tomorrow and how far he wants to take things in detail.

Also, helping is the relative quiet in China after a rather raucous weekend.  It does look like the Chinese government party doesn’t necessarily want to play hardnose.  So, that is a kind of sigh of relief, helping the bulls a bit this morning.

Now that the flight to safety appears to be over, we can go back to watching the yield on the ten-year.  If it moves up above 3.75%, that may begin to put pressure on equities and, below 3.65%, may put a bid in.  The fact that the VIX remains below 22 is a bit of a headwind to the equity bulls.  So, we will keep an eye on the VIX too, but for now the primary signal is indecisiveness.

Chinese Protesters Force Capitulation
Peter Boockvar:  To an extent, the Chinese protesters did what they needed to do in terms of garnering responses from the Chinese government, both central and local. Here are some that I’ve seen:

1) According to AP yesterday, “In the capital of Beijing, city government officials announced they would no longer block access to apartments where infected residents live.” How generous of them.

2) “In the port city Guangzhou, officials said they would no longer require citizens to undergo mass testing, which they claimed was because of a lack of resources.” Zhejiang, where people have been locked down for 3 months, there is a story on Bloomberg today titled “China’s Zhejiang vows to put people first in covid prevention.”

3) A spokesman for the National Health Commission today in a press briefing said ‘China must reduce the inconvenience caused by covid outbreaks on the economy and the public to the minimum level’ and that ‘local officials must keep avoiding excessive covid curbs’ and that ‘NHC is coordinating with local governments each day to respond to complaints from residents in an active and effective way’, also according to Bloomberg.

4) On vaccinations, the NHC released a statement meant to encourage the elderly to get vaccinated.

5) A story on the South China Morning Post today said “Prestigious Beijing based Tsinghua University, a cradle of China’s political elites, has sought to pacify its students by addressing their concerns over covid related restrictions after they staged a weekend protest calling for ‘rule of law and freedom of expression.’ To placate the students, the university authorities held a meeting, both in-person and virtually, with students on Monday afternoon to discuss covid related measures.”

7) In an editorial on the South China Morning Post titled “China faces moment of truth on its zero covid policy amid public defiance, pandemic fatigue”, the author said “In Beijing, several communities tried to negotiate over the weekend with grass roots Communist Party committees, which are legally self-organized bodies without government authority, to lift lockdowns. Piece by piece, China’s zero covid system is crumbling under its own weight…China’s pursuit of zero covid is losing support and no longer resonates with the great majority of the population, who have had enough lockdowns and testing. It is time for Beijing to face the reality and make the right choice.” The bold is mine and keep in mind that the South China Morning Post…

Bottom Line
Bottom line, it seems that this is the beginning of the end of China’s harsh approach to covid and we need to think about what both China and the rest of the world will look like on a full reopening which we haven’t seen since 2019. How the world’s economy will respond, what inflation it generates, where energy prices go, and will we unleash the Chinese consumer and tourist again after three years of muffling. Also, does this keep global interest rates higher for longer? We remain bullish specifically on travel, tourism and leisure in both China (like Macau casinos) and the rest of Asia in anticipation of this reopening along with energy stocks and stocks broadly in Asia.

Home Prices
The S&P CoreLogic September home price index saw a 10.7% y/o/y increase, continuing to slow due to tough comps and outright declines m/o/m for a 3rd straight month for reasons we all know. The sunbelt states led the gains with Miami, Tampa, Charlotte, Atlanta and Dallas the top 5. The smallest increase was in San Francisco of only 2.3% followed by Seattle, Minneapolis, DC and Portland. 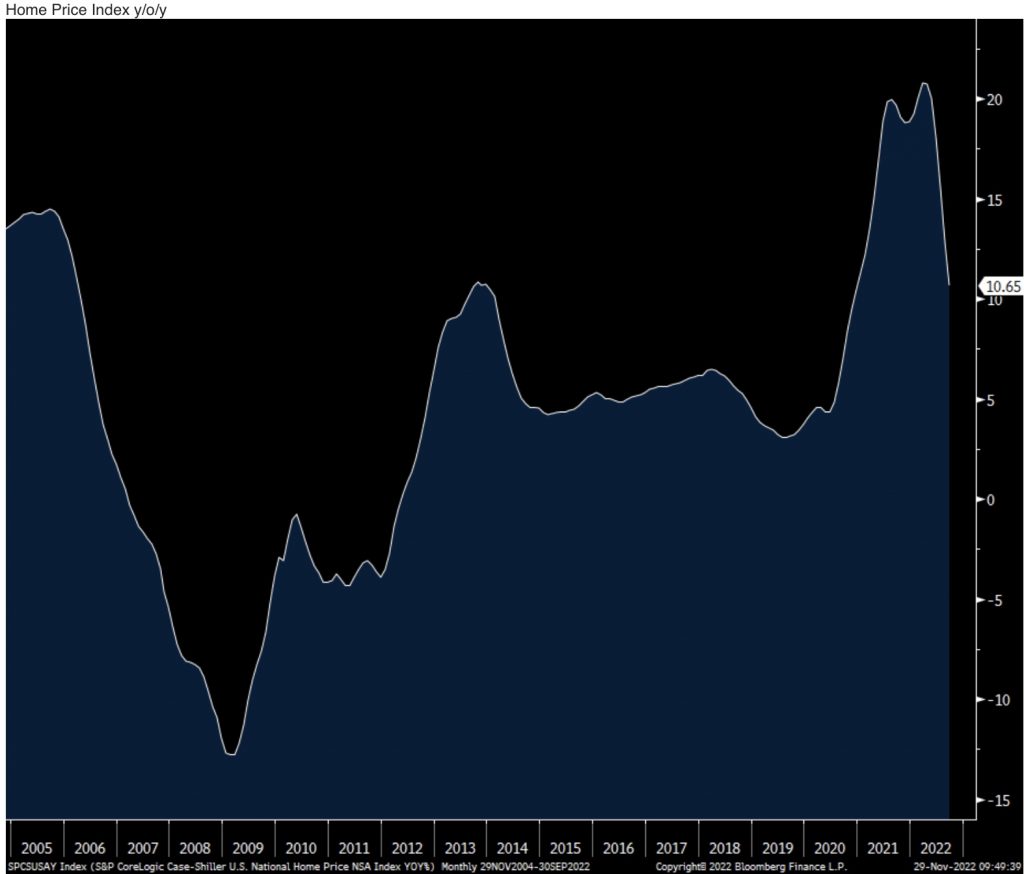 Again, the only question for the housing market right now as long as mortgage rates stay between 6.5-7% is where do home prices settle out at in terms of gains in some markets and declines in others. For the first time buyer, lower prices would be a really good thing in order to offset the sting of high interest rates. 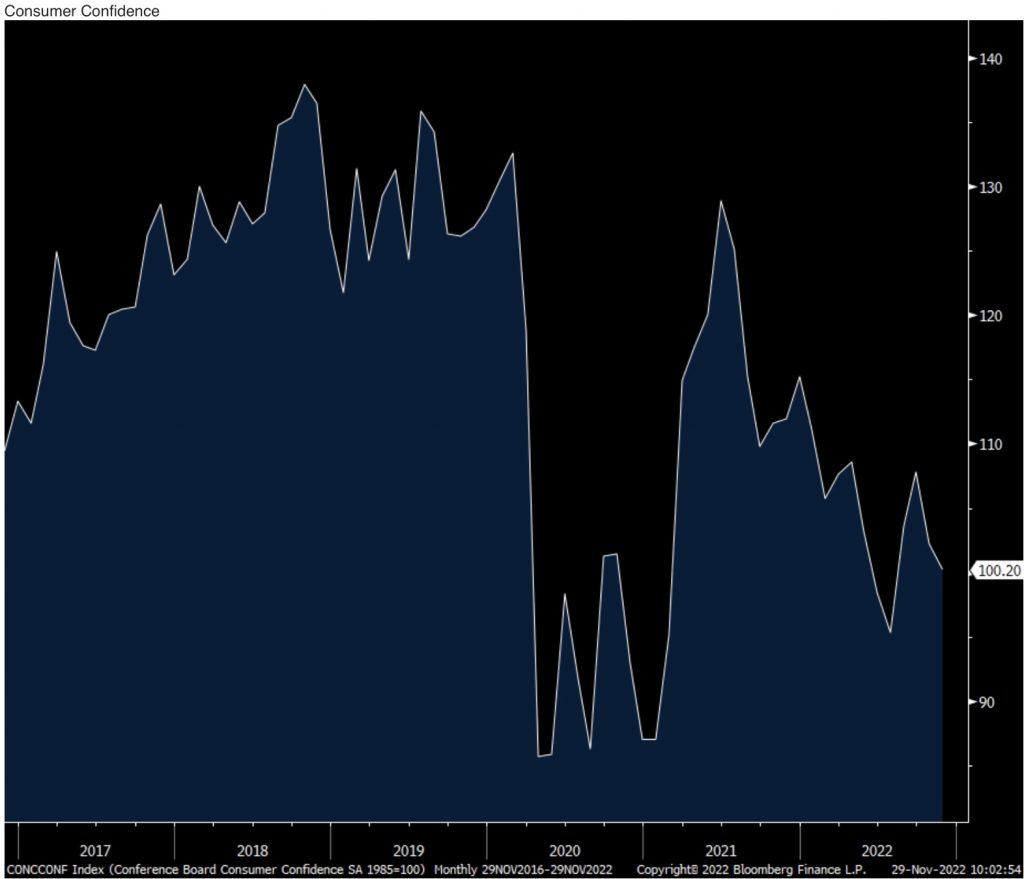 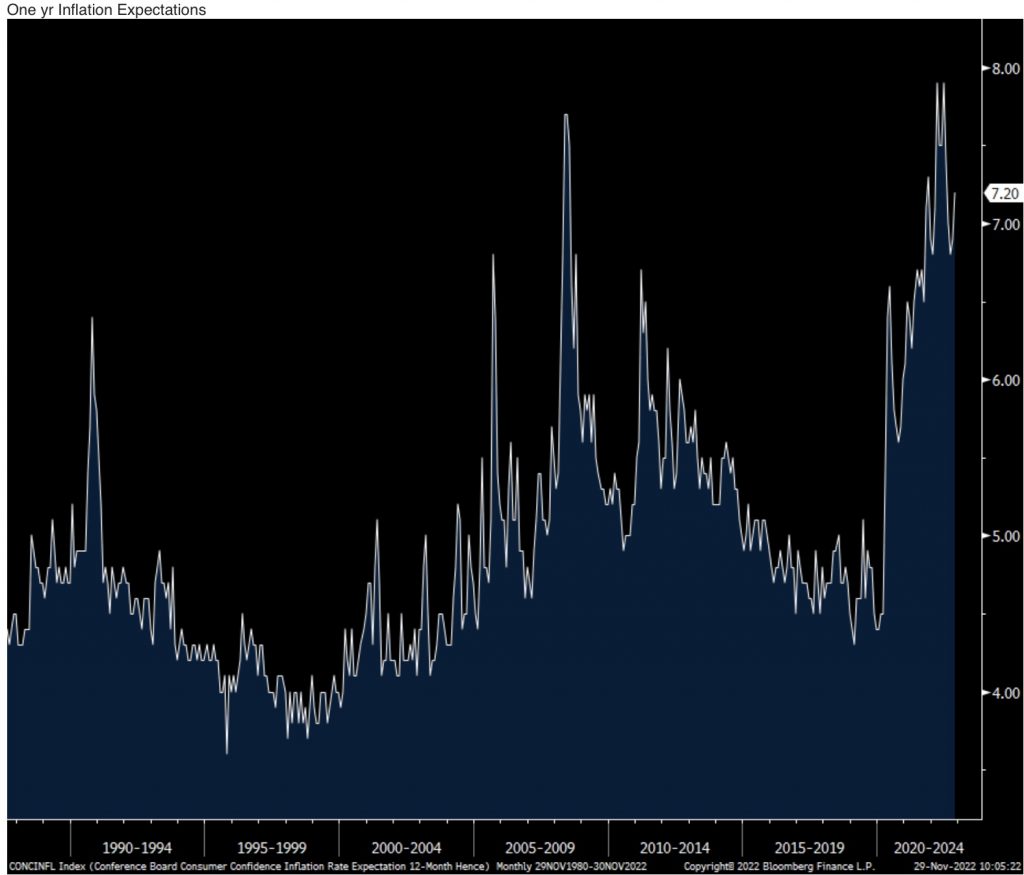 After weakening last month, the answers to the labor market questions were mixed. After falling by 4.4 pts in October, those that said jobs were Plentiful rose 1 pt. There was no change to those that said they are Hard to Get after rising by almost 2 pts last month. There was a .9 pt drop in those expecting ‘More Jobs’ after rising by 2.1 pts in October. Those that expect ‘Fewer Jobs’ rose to the highest in 5 months. Income expectations moderated off the highest level since July 2021.

After improving last month, spending intentions softened again. Those that plan to buy a car gave back almost all of the 3 pt rise seen in October. Those that plan on buying a home fell 1 pt after jumping by 2.4 pts last month. Plans to buy a major household appliance fell 7.4 pts to match a 4 month low…

The Conference Board said simply, “The combination of inflation and interest rate hikes will continue to pose challenges to confidence and economic growth into early 2023.” For perspective, consumer confidence stood at 132.6 in February 2020 and bottomed at 85.7 in April 2020. The question here as we look to 2023 is how much does the sour mood impact spending behavior. The mood of low to middle income spenders are certainly influenced by their wages relative to their cost of living because of the outsized percentage of the latter relative to the former. The higher income consumer will be more influenced by the level of their stock portfolio. ALL will be impacted by the state of the labor market and to the extent the unemployment rate rises from here. I expect a 4 handle in the unemployment rate in the next few months.

***To listen to Nomi Prins discuss her surprising predictions for 2023 as well as why 2023 will be a huge year for the gold, silver and mining share markets CLICK HERE OR ON THE IMAGE BELOW.