On the heels of Turkey shooting down a Russian fighter, today one of the greats in the business sent King World News a fantastic piece about the chaos in the Middle East, the collapse in the Baltic Dry Index and the war in gold.

November 24 (King World News) – Overnight markets were weaker, with Europe losing better than 1.5%. The proximate cause for that weakness appeared to be the news that Turkey shot down a Russian fighter, as events in the Middle East continue to deteriorate and morph in somewhat predictable yet chaotic ways…

Bill Fleckenstein continues:  Through midday our stock market lost about 0.75%, led lower by the Nasdaq, which in turn was led lower by the momentum favorites like Facebook, Amazon, Netflix, LinkedIn, etc. However, that dip was arrested, as nearly everything slowly turned green and the market closed with a small gain. Away from stocks, green paper was weaker, oil gained 3%, fixed income was higher, and the metals gained 0.5%.

As we have posted on the home page, there will be no Rap until Monday. In the interim I’m sure stock bulls are planning to throw a party tomorrow and on Friday’s short session (which often sees wild speculation). If for some reason they are unable to, there might be information in that.

It seems inconceivable that the market is not on borrowed time and just waiting for the right excuse to fall apart, but historically it has been difficult for that to happen in late November or early December. On the other hand, since everyone already believes that, if it were to start somehow it could swiftly get out of control. If the indices manage to hang on into the end of the year, I think 2016 could get off to a fast start to the downside.

Save Room for Seconds

Lastly, I’d like to wish all our readers a Happy Thanksgiving.

Question: Hi Bill: As you certainly know the BDI, the Baltic Dry Index has reached the low of 498 as compared to 12000 reached in 2008, a 96% decline. How much importance do you give to that index and what kind of repercussions do you expect in the US and Global stock market, if any? Thank you 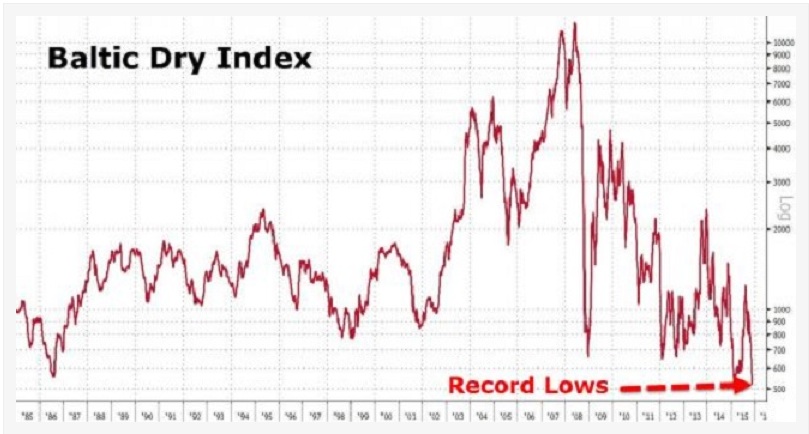 Answer from Fleck:  “I don’t tend to pay attention to them, as there are other ways to get a read on economic activity and the freight indices are impacted by more than just “trade” as I understand it (e.g., the increasing size of new ships), so they aren’t as great of a barometer as one might expect them to be. Still, I think they do tell you that trade is somewhat weak.”

Question: Bill, do you believe there will be a market dislocation between now and Dec meeting if they try and raise rates, or will the confidence and seasonality drive stocks higher?

Answer from Fleck: “The odds are that the market holds together into year end, but everyone thinks that and is positioned for that, thus if somehow the market can find a way to tank (there are no shortages of catalysts) it COULD accelerate lower in a hurry. Hope that makes sense.”

Question: Dear Bill, congratulations on your terrific site. I am a recent subscriber and love reading your thoughts on markets etc. I track the gold price closely and have watched with interest movements over the last few weeks. Manipulation by investment bank cronies comes to mind – why can’t something be done about this blatant rort? Thanks

Answer from Fleck: “Thanks, but unfortunately no one in the regulatory structure really cares about gold.”

Question: Bill, you have been consistent with your view that eventually, someday, gold will catch a serious bid and ultimately return to old highs. Given the continuing downward pressure in PM, I hope that you would tell your readers if your outlook changes marginally regarding the PM’s, if you are beginning to have some doubts? For many of us, selling gold and silver at these levels makes no sense UNLESS one has some immediate cash need. And even if you did sell, where would a sane person put the proceeds? Not in equities or bonds! Anyway, thanks for your cheer over these difficult times!

Answer from Fleck: “eventually, someday,” you are making it seem so hopeless. Stop beating yourself up. I have no doubt how this movie ends, and the fantasy is now nearing an end. You’ve endured most of the suffering, so just be a bit more patient.

BUCKLE UP: Silver Set To Vault Higher, Gold Bull, Inflate Or Die, And The Average Person Is Drowning In Debt