Alasdair Macleod and Peter Schiff on gold, silver and yesterday’s $104.5 billion of not QE.

Another $104.15 Billion Of Not QE
October 18 (King World News) – Peter Schiff:  “Looks like the Fed did another $104.15 billion of Not QE yesterday. The Fed claims it’s only temporary. But that’s what Bernanke claimed when the Fed started QE1. Milton Freedman once said “Nothing is so permanent as a temporary government program.” The same applies to QE!”

Alasdair Macleod:  “Gold and silver continued their consolidation in moderate turnover on Comex. By morning trading in Europe today (Friday) gold had lost $4 from the previous Friday’s close to trade at $1490, while silver was down 10 cents on the same time scale at $17.50. 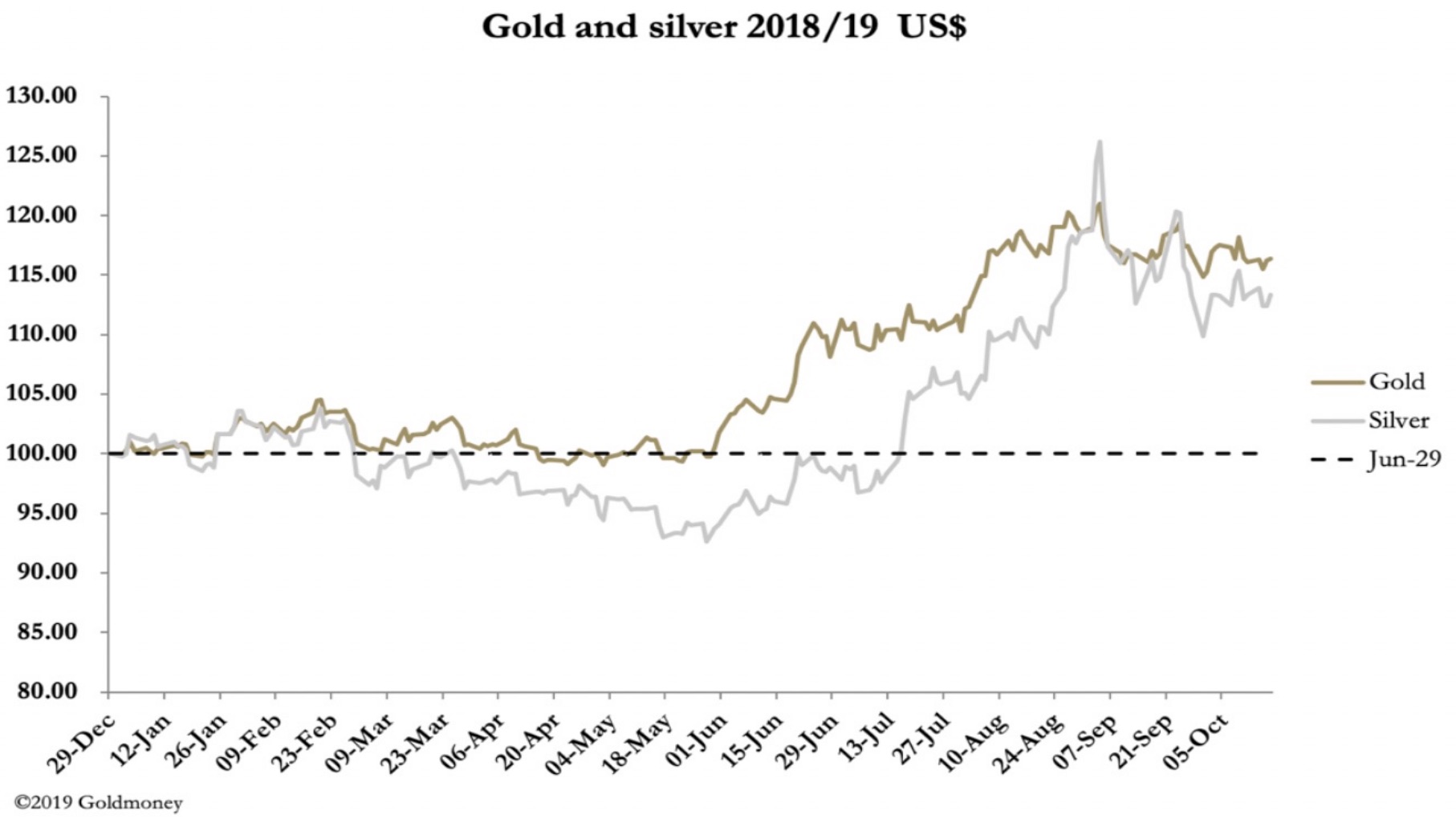 Over the week, US bond yields rose, a minor discouragement for precious metals perhaps, but the dollar fell, with the trade-weighted index down nearly two per cent, the largest move for some time. This is our next chart. 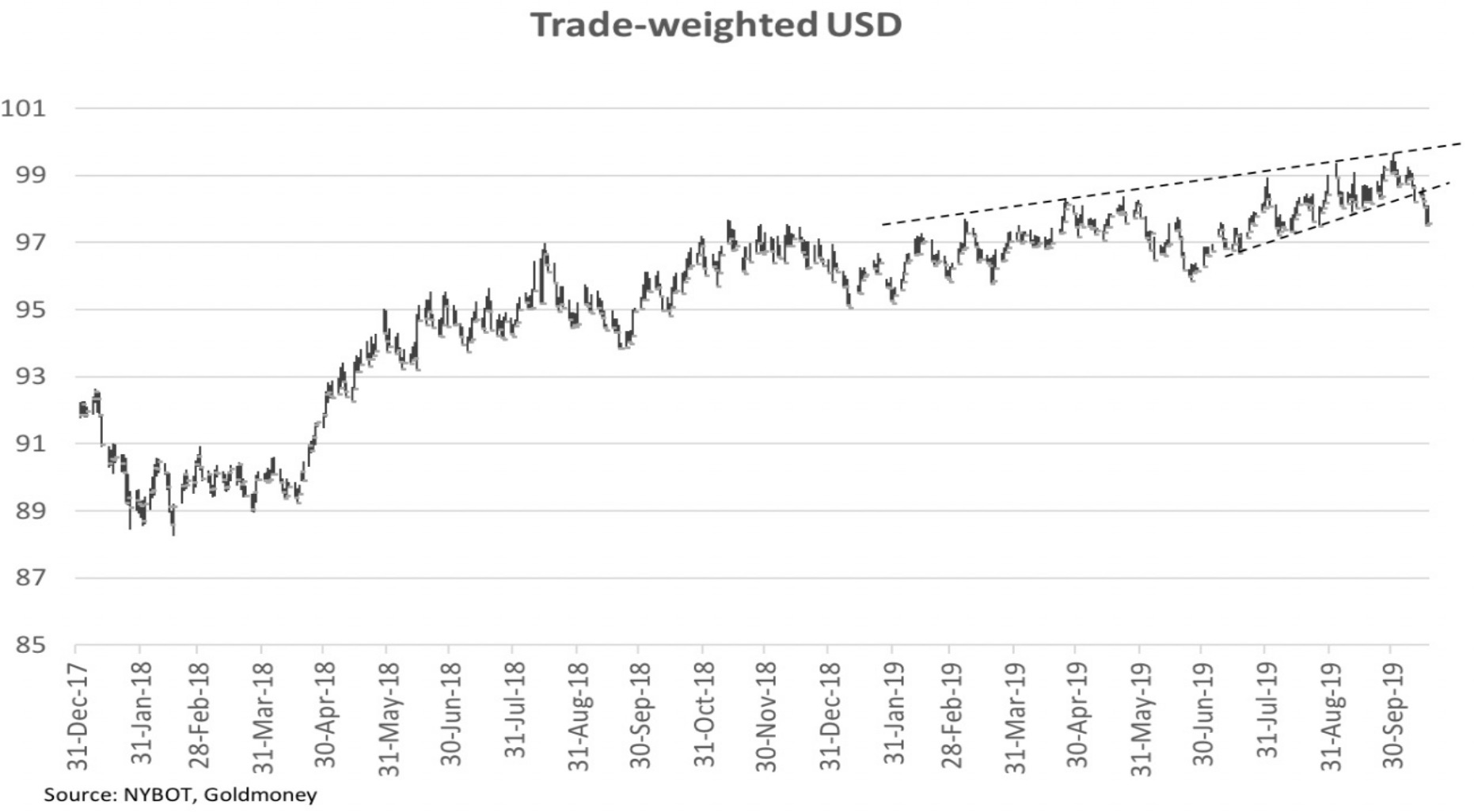 As the chart shows, the index has violated the support of a short-term trend line, having failed multiple attempts to break above the upper trend line. But these are desultory markets, affected with an October blight.

For financial markets generally it is worth noting that October is often the calm before some sort of storm: 1929 and 1987 particularly come to mind. That point made, we need more than superstition to forecast prices, and in October’s case the only seasonality we can invoke is it follows the end of the third quarter, a time notorious for price manipulation for valuation purposes.

Perhaps this October’s troubles are to be found in the continuing turmoil in America’s repo market, with the Fed injecting still more liquidity into the banking system on a daily basis. Several theories have been put forward, most of which don’t stand up, such as liquidity being drained at the quarter-end (which has passed) and the effect of corporate tax payments. Logically, there are probably two reasons: a slow-down in the US economy means accumulating inventories need to be financed by corporates drawing down on loan facilities, or it might indicate one or more foreign banks with US subsidiaries facing liquidity problems.

We shall only know with the benefit of hindsight, but gold and silver futures will be assessing whether repo difficulties end up inducing a flight to cash (dollars) or an escalation of fear over systemic risk will lead to increased demand for bullion.

Interestingly, there are signs the bullion market in London is de-gearing, with significant bullion imports recorded in recent months. Partly, this has satisfied physical ETF demand, but the balance appears to have gone into Bank of England and LBMA vaults. Is this a sign of systemic concerns developing at the highest levels? Continuing accumulation of gold bullion by central banks points to the possibility.

Indeed, this week the IMF warned that low interest rates have fuelled a level of corporate debt that risks becoming an $19 trillion crisis in the event of a recession – an outcome already developing and that might have prompted its report.

Putting this week’s evidence from capital markets together, we can only conclude that continuing liquidity problems in the repo market, yet more statistical and survey evidence from business of a deepening recession, and even the IMF running scared might place us in the calm before a gathering storm.

Our last chart is of the Managed Money category on Comex, showing it is still overbought and in need of a shakeout. We shall get an update after hours this evening. 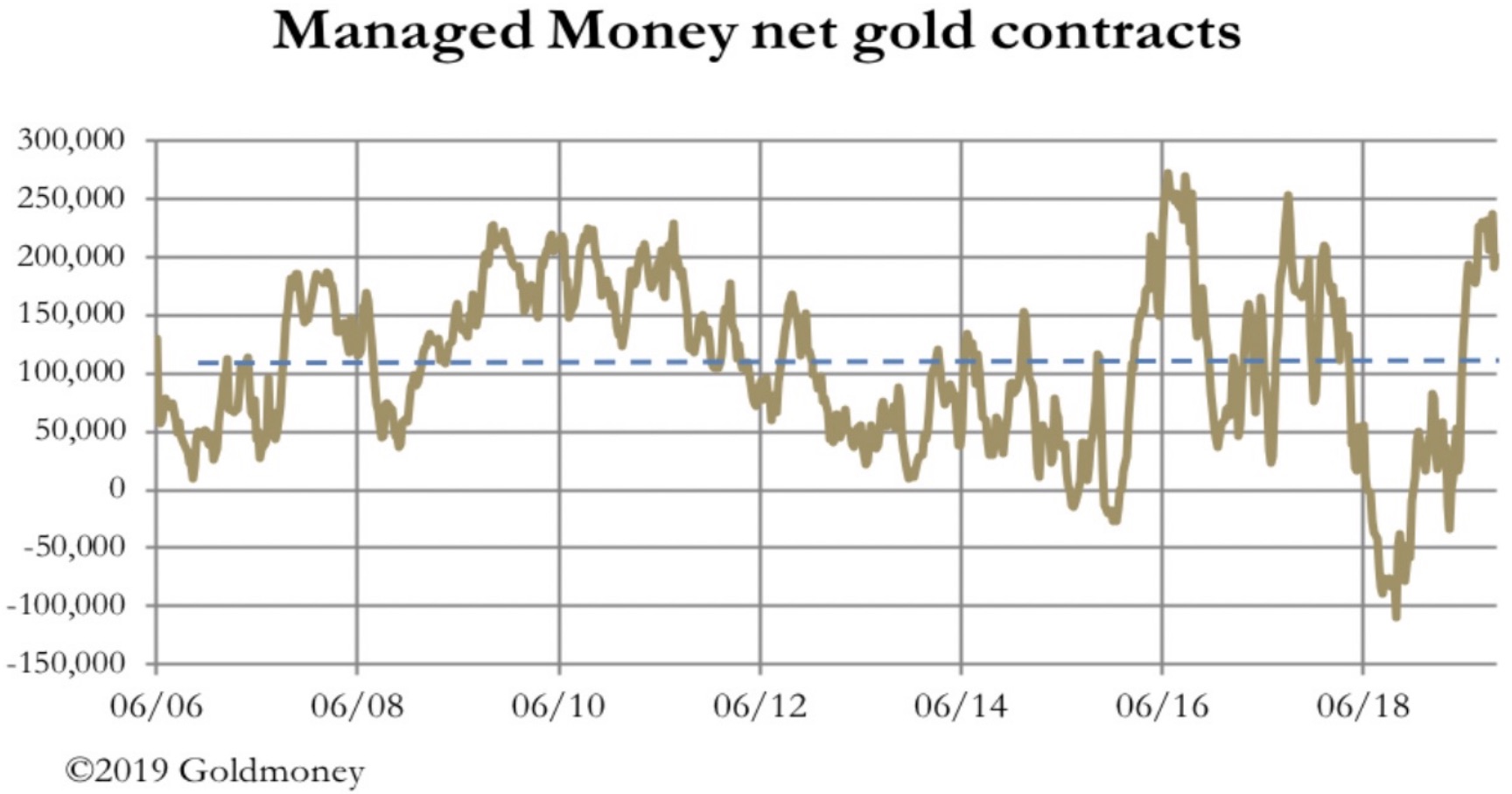