Chaos continues to engulf global markets. Look at what is happening.

US Dollar
September 26 (King World News) – King World News has continued to monitor the US Dollar Index breakout (near the 104 area) with a 120 target. The US dollar has surprised many currency market watchers with its relentless strength.

UPDATED US DOLLAR CHART TODAY:
US DOLLAR INDEX MAY CONTINUE TO SURPRISE:
Next Target For US Dollar Index After
Major Upside Breakout Is 120!
(Currently Trading At 114) 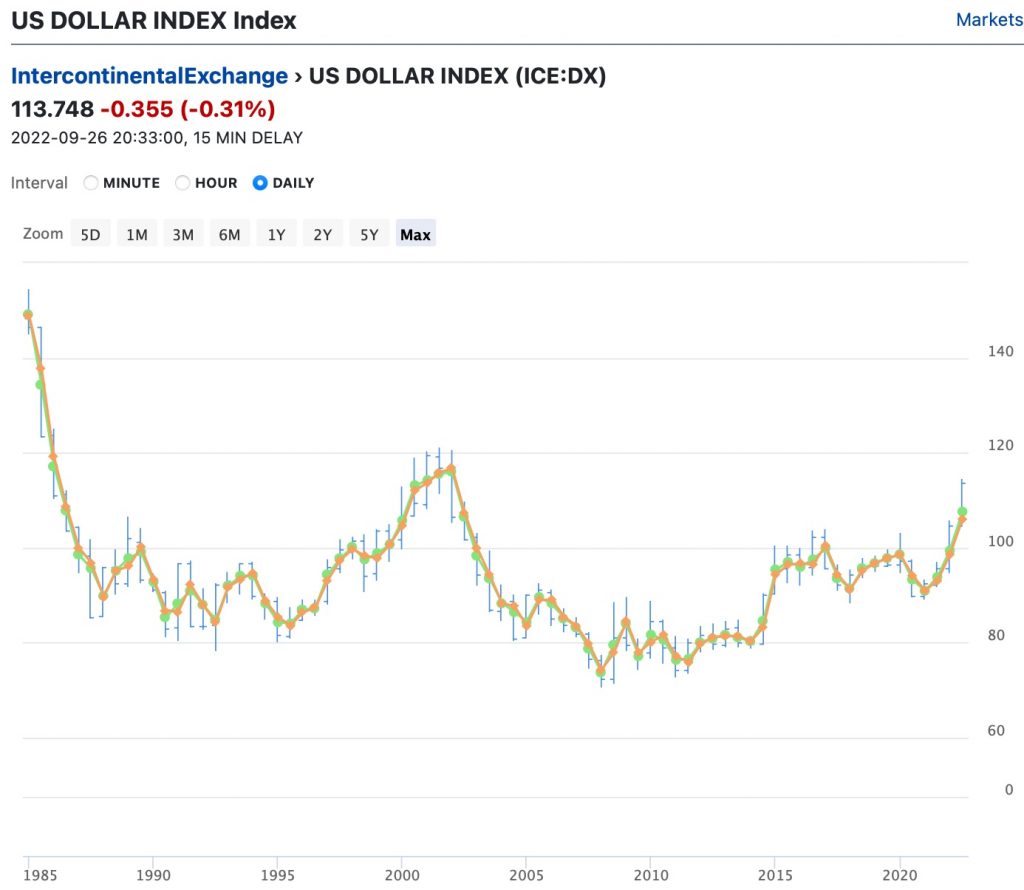 NOTHING TO SEE HERE:
Just The 4th Worst Start Of The Year For Stocks In History 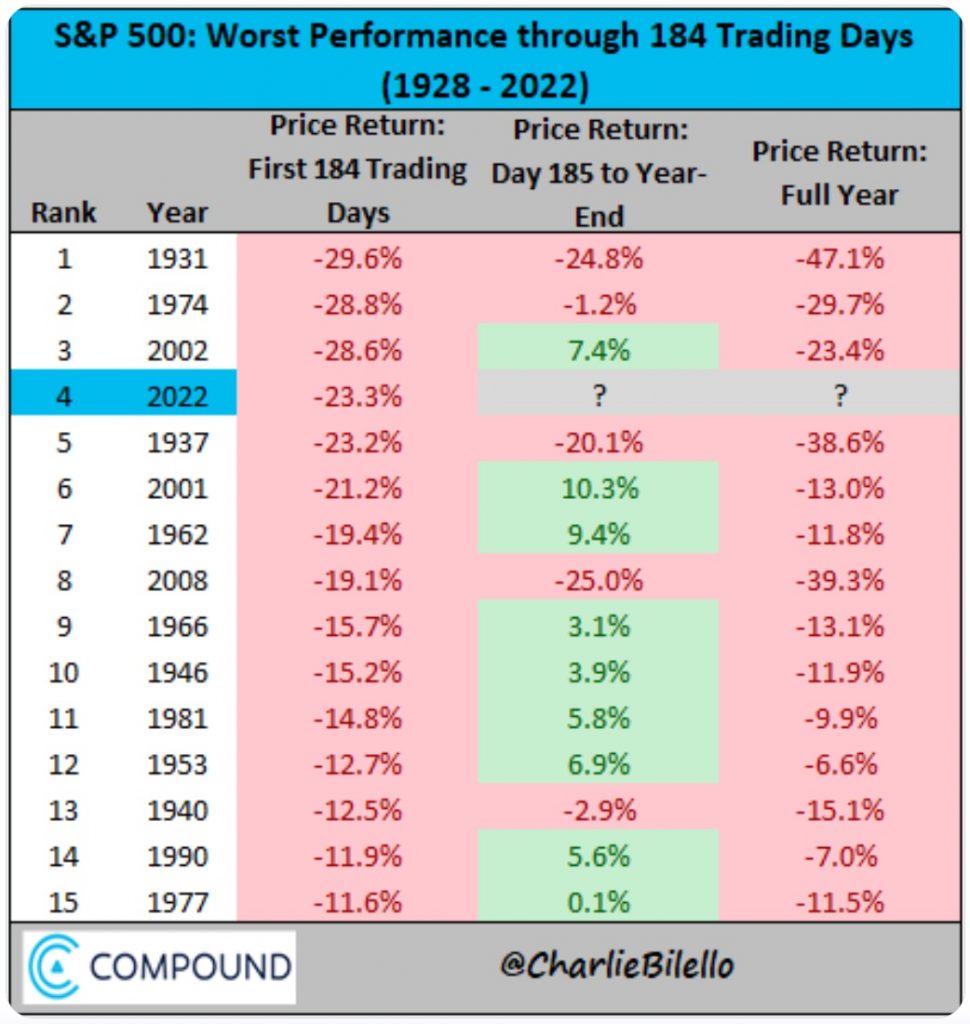 No Longer A Pound Of Silver
Charlie Bilello:  The British Pound hit a new all-time low today against the US Dollar, breaking below the prior low from 1985. The Pound has lost over 20% of its value against the Dollar this year and more than 50% from its peak in 2007. 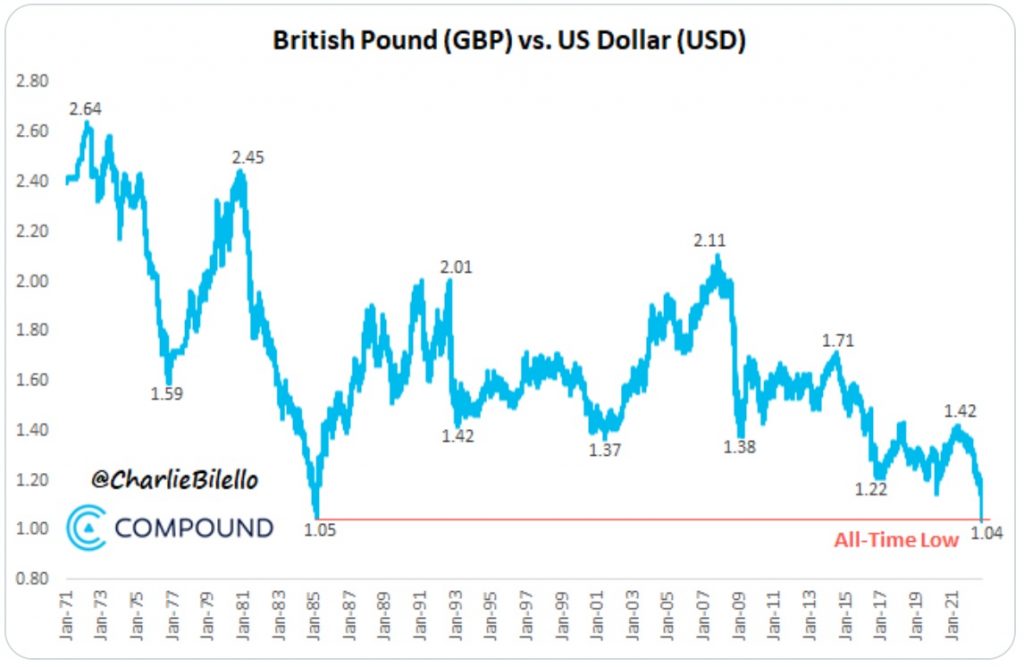 Gold
Fred Hickey:  “Benchmark (gold) prices in Shanghai have climbed to a premium of more than $43 an ounce over their London equivalent, the highest since 2019” COT report showed another big jump in Managed Money (hedge funds & CFTs) net short futures to -36.7K contracts.

The Managed Money (MM) net short position is also the highest since the (record high) in 2018-2019 from whence gold soared from around $1180 to 2060 over the next 2 yrs. Once again, almost all (over 90%) of last wks. (thru Tues) drop in futures contracts was from increased shorts…

Fred Hickey continues:  While there have been steady outflows from the GLD ETF during this gold selloff, the daily declines have been relatively light. Not much long futures selling either. Gold’s declines have been driven primarily by Western trader shorting, meanwhile, the East continues to accumulate.

This Western investor derivatives shorting clearly is not sustainable (especially with strong Eastern physical gold buying and widening premiums) & eventually the futures traders will be forced to cover their shorts, leading to a massive rally in gold. Could happen at any time.

End Of The Rainbow Stuff
Graddhy out of Sweden:  The commodities bull market will be the greatest opportunity in your lifetime to get out of the rat race. Every parameter I can think of is in place for the greatest bull of all time. End of the rainbow stuff. Maximize income, minimize consumption, and play it the right way.

Major Stock Market Crash Alert, Plus Gold & Silver Update
To listen to Michael Oliver discuss what to expect for gold, silver, the US dollar, mining stocks, the Dow, S&P, NASDAQ and more CLICK HERE OR ON THE IMAGE BELOW.

Russia And China Making Moves
To listen to Alasdair Macleod discuss Russia and China declaring the truth about their massive gold reserves as well as what to expect next after a wild week of trading CLICK HERE OR ON THE IMAGE BELOW.