Central Banks Comment As Gasoline Prices Hit Highest In 7 Years, And Interest Rates Rising But What Will Happen When Stock Markets Collapse?

Central banks comment as gasoline prices hit the highest level in 7 years, and interest rates rising but what will happen when stock markets collapse?

Bank of England
October 11 (King World News) – Peter Boockvar:  The Bank of England it seems might not be waiting to at least March for its first rate hike. As their QE program ends at year end 2021, rate hikes are now the crux of any tightening discussion. In an interview over the weekend with the Yorkshire Post, Governor Bailey said on inflation:

“We are going to have a very delicate and challenging job on our hands so we have got to in a sense prevent the thing becoming permanently embedded because that would obviously be very damaging. Unfortunately, if you look at our last forecast, it is going to go higher, I am afraid.”

This was followed by comments from Michael Saunders, a hawkish BoE member, who spoke in the Telegraph and said after he wasn’t going to give a precise time for tightening:

“But markets have priced in over the last few months an earlier rise in Bank Rate than previously and I think that’s appropriate.”

With the markets having priced in a 50% chance of a December rate hike and a 100% chance that it happens by February, Saunders said;

“I’m not trying to give a commentary on exactly which one, but I think it is appropriate that the markets have moved to pricing a significantly earlier path of tightening than they did previously.”

Those December odds today after his comment are now up to 60%.

Interest Rates Rising For Now But What
Will Happen When Stock Markets Collapse? 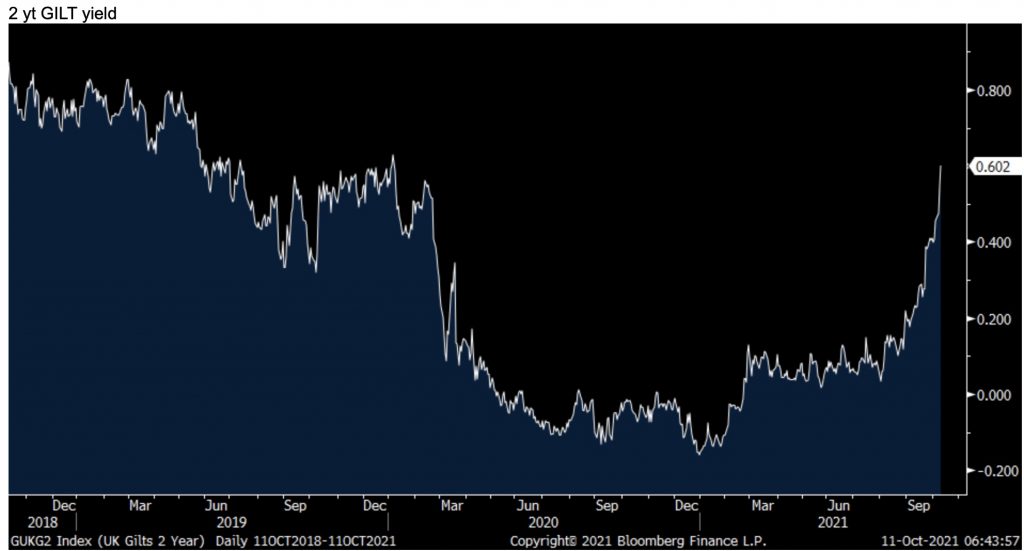 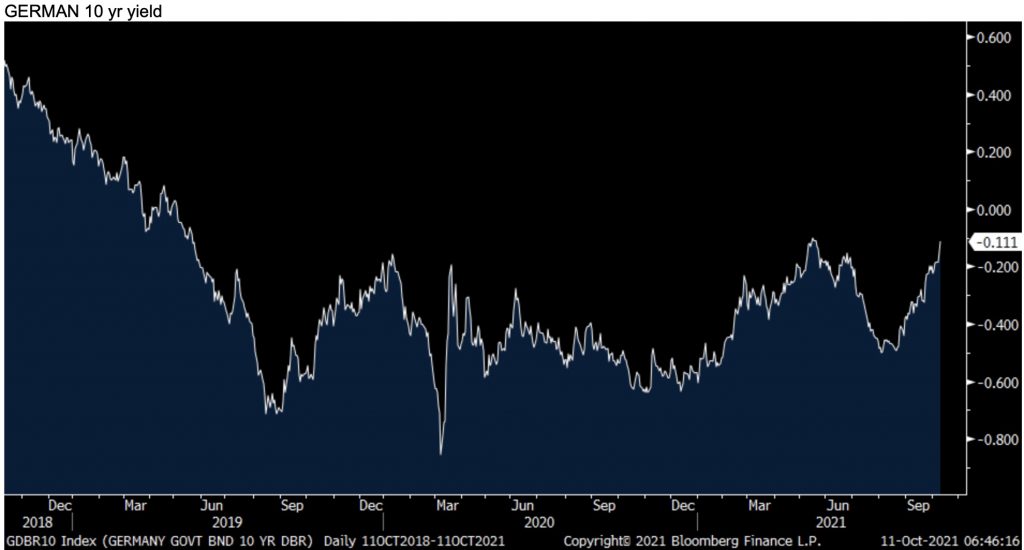 Gasoline Prices Highest In 7 Years
By the way, on energy in the US, AAA said the average gallon of gasoline yesterday was $3.27, the highest in 7 years.

And herein lies the problem that I’ve been talking about for a while but today it is actually an ECB member that is doing so, Klaas Knot, one who is more hawkish. He acknowledges that easy money stokes speculation and risky behavior and said:

“I am less positive about the build up of financial vulnerabilities and risks. Precisely now that the economy is improving, we tend to be less aware of the vulnerabilities building up. And that is something I would like to guard against.”

Knot, I appreciate your concern but it’s too late. Relevant for the rest of us in the markets where valuations are historically high on many metrics, credit spreads extremely tight and we know what’s also going on in a variety of other asset classes, he went on to say:

“This risky behavior is only sustainable at low inflation and interest rates.”

I’ve been arguing the same thing that in a world of NIRP, ZIRP, and low rates, high valuations about everywhere, and excessive debt widespread, we are just not set up for any prolonged period of higher inflation. If the fed funds rate was 3% and/or the 10 yr yield at something between 3-5%, we would have much more of a rate cushion to deal with higher inflation and it gets to the point said here a million times for years, central banks should be careful what they wish for in their desire for higher inflation…

Tomorrow we get the full NFIB small business September report but last week we did see the labor market components. Plans to Hire fell back by 6 pts to 26% but off a record high dating back to 1974 after rising by 5 in August (the long term average is 11%). But we saw a fresh high in Positions Not Able to Fill at 51%, up 1 from August. Current and future compensation plans both were higher and at record highs dating back to 1984 when these components were first included. 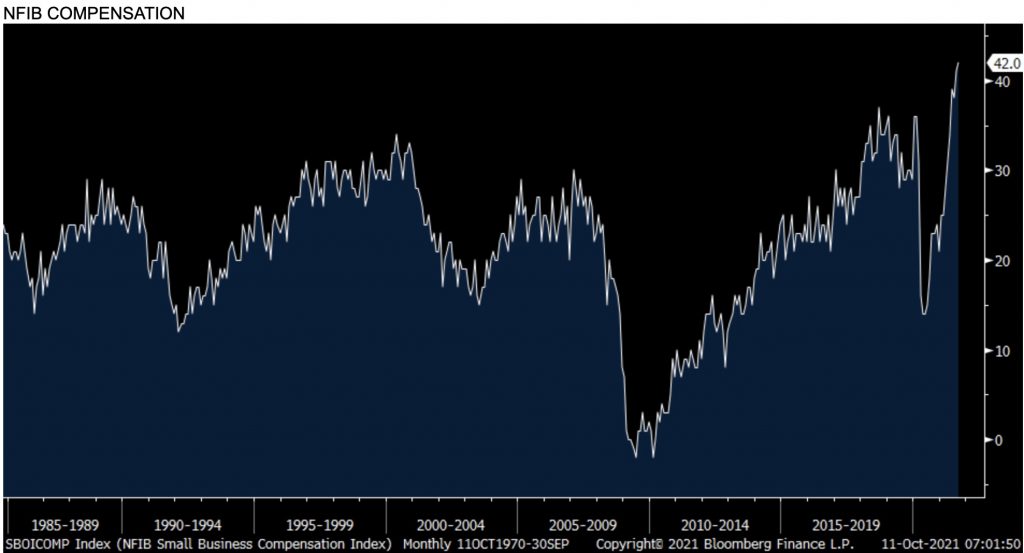 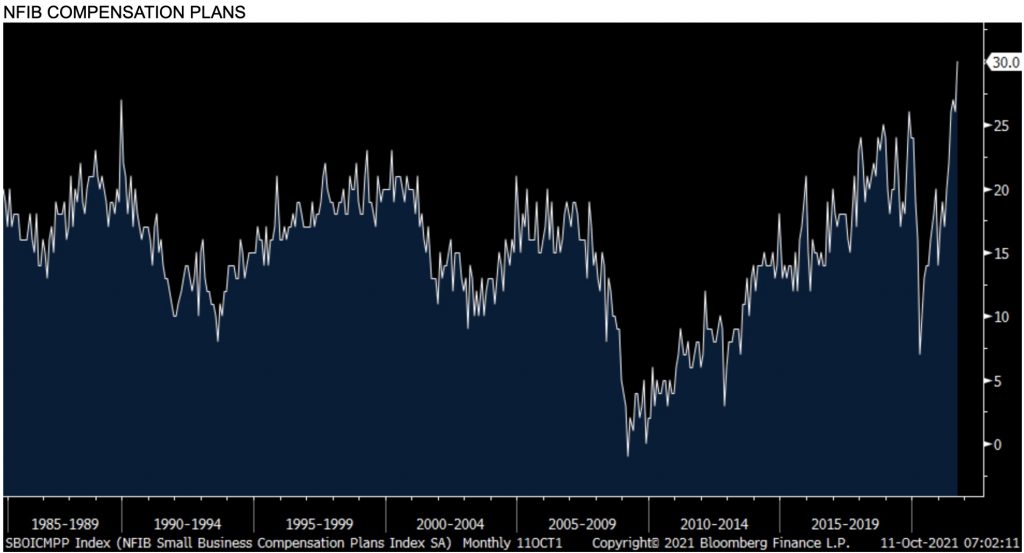 “More and more small business owners are struggling to find workers for their open positions. For most small employers, labor costs are the largest operating outlay and owners will be compelled to pass those costs on to their customers by raising prices.”

The underline is mine and we’ll see to what extent productivity gains can mitigate this.

Currency wise today we are seeing some bifurcation as commodity currencies are trading better than those that aren’t. The Canadian and Aussie$’s are higher while the yen and euro are lower.

Canadian Dollar Strengthening vs US Dollar 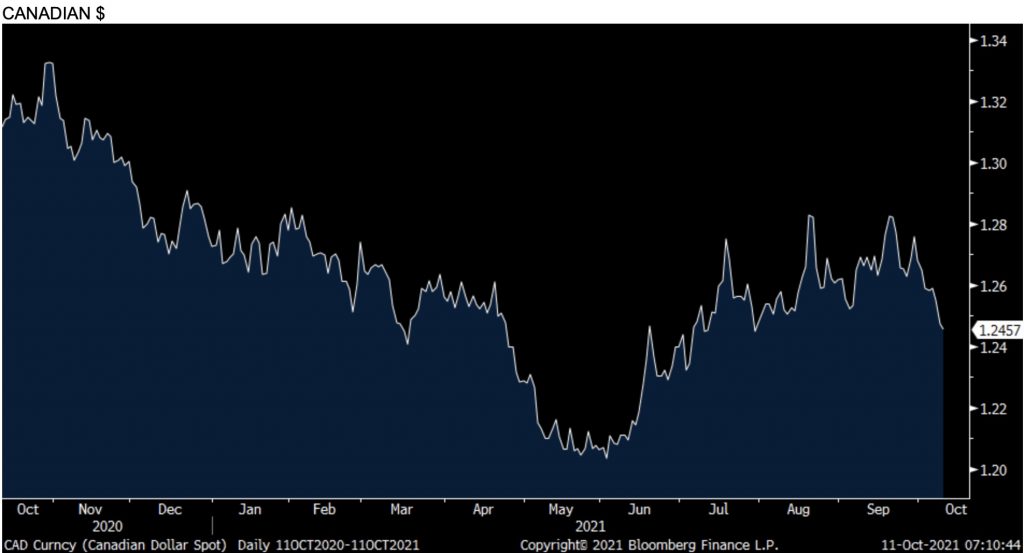 Japan in particular is a big importer of energy and even more now after most of their nuclear plants are still shut. Germany we know regretfully decided to close all their nuclear plants and has been relying on more coal ever since. Also helping the Canadian dollar was the strong payroll report on Friday where they’ve recovered all the Covid jobs lost.