As we kickoff trading for the 4th week of 2018, one of the top money managers in the world just said, “Buy the hell out of gold, the gold-based monetary system is on its way.”

(King World News) – Stephen Leeb:  “It’s only January, but we’ve likely already seen 2018’s most significant event, and it’s not the government shutdown. Rather, it was the disclosure of a fundamental architectural flaw in the design of the computer chips that are the backbone of virtually all of our technologies. The flaw potentially affects almost every industry. And it could dramatically lessen our ability to deal with resource scarcities, which I’ve long argued will determine what kind of future we have…

Stephen Leeb continues:  “It also likely gives China a chance to gain further ground on us. If you were bullish on gold and commodities before, you should be wildly bullish now. I certainly am. But I’m also more alarmed about the world, and America’s position in it, than ever before.

Especially scary is that the U.S. shows no signs of being scared. In the 1950s when the Russians launched Sputnik, pictures of the satellite circling the world frightened us and spurred us to a dramatic resurgence in science and a manically focused NASA that landed a man on the moon. Revelation of the computer flaw should be a comparable wake-up call. But there’s no sign that it is.

There’s no easy fix through security patches. While you definitely should install the patches being offered, the trade-off is that they slow computers down. Because the flaw is in the hardware design itself, the only real solution is to redesign the computer chips that are at the heart of all computer systems, the central processing units (CPUs). But there’s reason to think that even then, we’d still be dealing with slower computer speeds because of the need to deal with legacy issues. Or alternatively, if the Chinese already have figured out a better architecture (see below) and we tried to follow in that path, it would consign us to lagging by several years.

The flaw arose when Intel discovered and began building chips with a feature termed “speculative execution.” It speeds things up tremendously by allowing chips to take steps before they actually are given instructions – like a person nodding in response before the person who’s talking has completed a sentence. But the recently discovered problem was that critical information that would have stayed hidden became available to hackers.

Chips that use speculative execution are about twice as fast as chips that do not. So, it’s not surprising that all CPUs, those made by Intel and as well as other manufacturers, rely on some form of it. 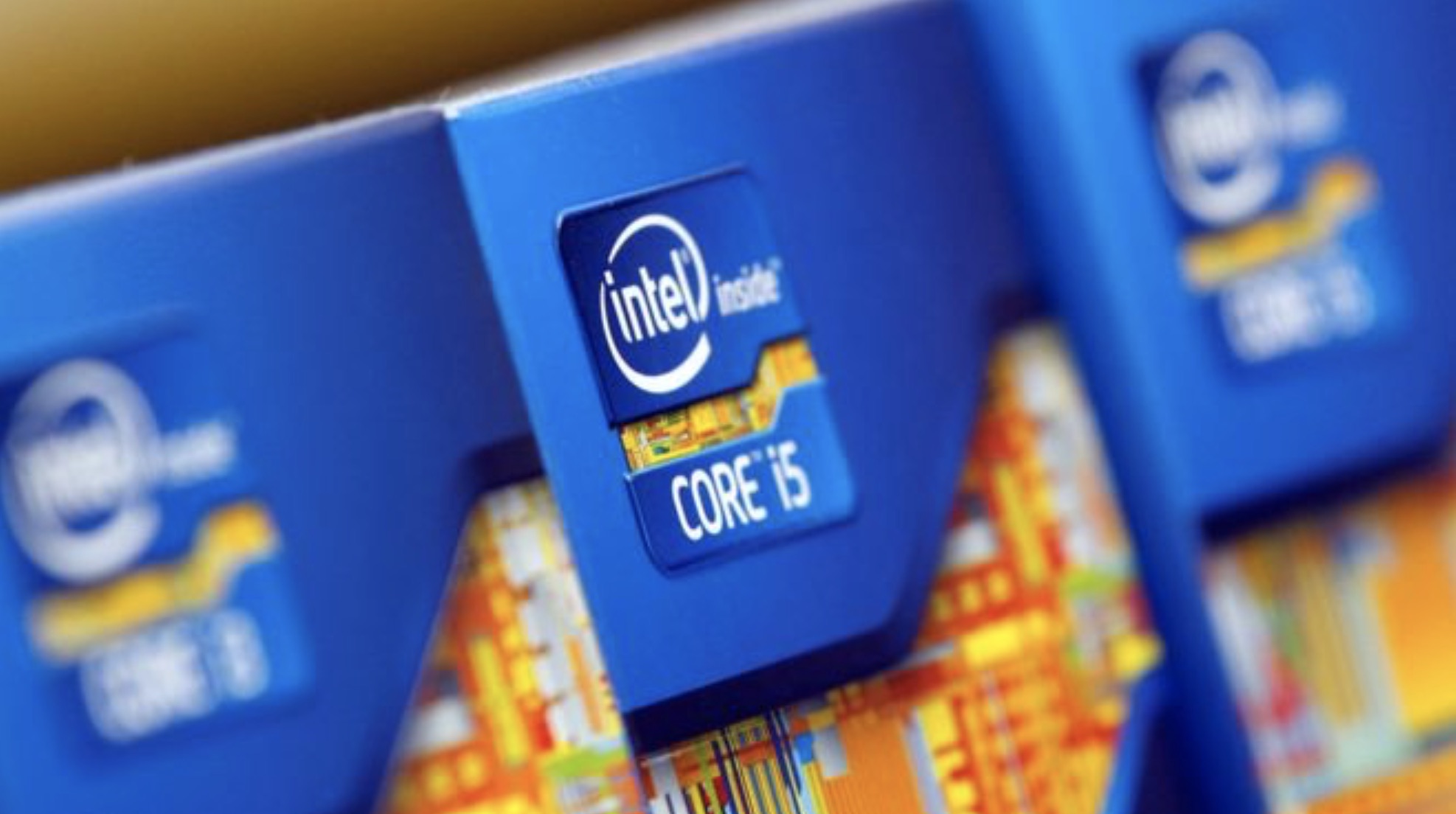 It’s telling that while the design flaw was discovered in June, it was only revealed this month, more than half a year later. That’s an exceptionally long delay for the computer world, and it speaks to how hard it was to find any sort of fix.

Most vexing is that the fixes are far from perfect. If you are patching a computer that does a lot of heavy lifting, which means those used in virtually all industries, you are now using a computer that runs slower. Nor is it even clear that the fix guarantees safety from hackers. No one has reported any hacks related to the flaw – but that doesn’t mean much given that for nearly 20 years no one, at least not in the West, even knew the flaw existed. Nor is there any certainty that we can prevent future hacking.

Here’s another thought to ponder, just in case you’re not already nervous enough. The Chinese and Russians routinely dramatically outscore us in computer programming tests, and the Chinese build faster supercomputers than ours. Could this possibly bear on the recent false alarm about an incoming North Korean missile speeding towards Hawaii, or the similar false alarm just five days later in Japan that got a lot less attention? I’m not saying the false alarms were hacker-caused – but I can’t say the thought didn’t cross my mind.

While Lenovo, which sells the most PCs in China, uses Intel processors, China’s supercomputers do not. No one outside of China knows the exact nature of the architecture of the CPUs inside these supercomputers, which are the fastest in the world. But based on things I’ve read in PC Magazine, it seems plausible they don’t rely on speculative execution.

We do know that China’s fastest computers not only are far speedier than ours but also use a lot less energy per calculation. This suggests the same architecture could be operating Chinese servers, which would mean the only secrets we might unearth by hacking Chinese computers would be, say, those in emails between spouses deciding where to meet for dinner. State secrets would stay secure in a cloud running on a nearly hack-proof and very efficient CPU.

Meanwhile, here in the U.S. it looks like we’ll be consigned to slower speeds. That’s a problem. Faster computers have been the bedrock of ever improving technologies. Now we’ve learned that bedrock is far less firm than we’d believed. If China’s foundation is stronger than ours, we should take it as a Sputnik moment on steroids, but so far its significance seems lost.

The accompanying chart is revealing. It shows the performance in the market of four stocks. 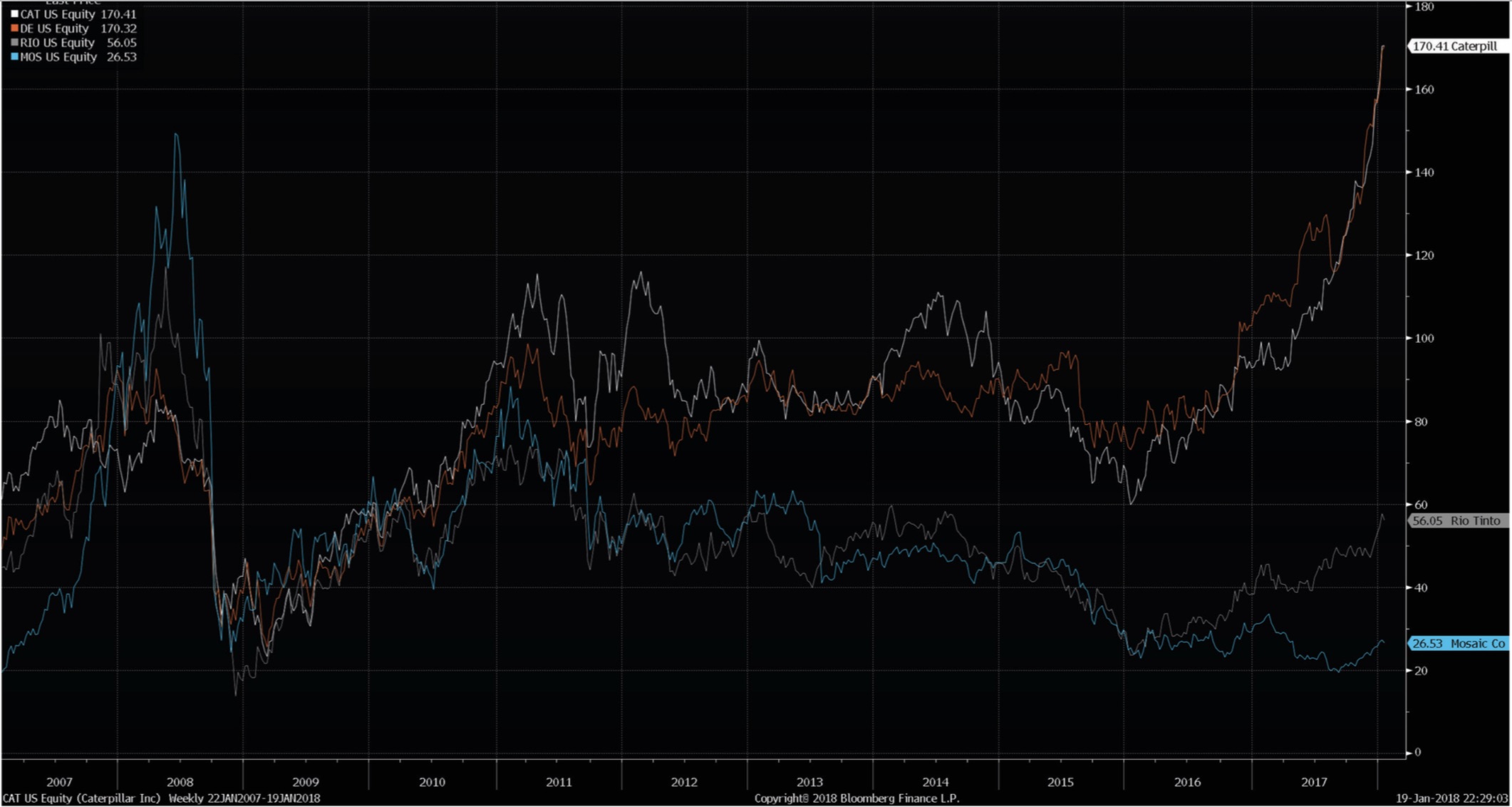 Two are commodity producers Mosaic mines phosphorous, which is used in fertilizers, while Rio Tinto is one of the world’s biggest diversified metals miner. The two others are commodity service companies. Caterpillar makes mining and construction equipment. Deere is the world’s largest farm equipment manufacturer and a leading provider of equipment for building roads and other infrastructure.

Shares of the two commodity service companies, Deere and Caterpillar, have soared, while the commodity producers have struggled. The most important reason for the disparity is that the more you mine, the harder it gets. That’s because commodity producers always go for the sweet spots – the low-hanging fruit – first. Higher-grade ore gets mined before lower grades are tackled; nutrient-rich farmland is farmed before more arid land.

Realize that Deere and Caterpillar don’t provide picks or shovels. They offer technology-rich equipment that helps miners and farmers maximize their returns – letting them know when it’s time to replace their machines, how close they are to hitting the mother lode, how to adjust irrigation levels in response to instantaneous weather forecasts. The companies invest heavily in technologies like machine learning, algorithms, and the fastest computers for analyzing big data. The computers used for these mining technologies are as hackable as any others, and the stakes are enormous.

If these technologies can’t compensate for lower grades and less fertile lands, it will be game over for us. I think the Chinese understand the connection between technology and commodities much better than we do.

That goes hand in hand with the point I’ve often made before: this is the first time ever that developing economies in total are bigger than developed economies – and thanks largely to China and its Belt and Road initiative, they now form a cohesive bloc. It adds up to enormous demands on resources on a scale we’ve never seen before, and it makes the need for ever better technologies increasingly critical.

To have any hope of managing the unprecedented demand for commodities that lies ahead, the world will need a monetary reserve system that is equipped to handle it – one that won’t allow for the kind of speculative bubble that was so devastating in 2008. In this regard, you could say that China’s most recent Sputnik moment was the 2008 crash in which the dollar played a major role. And China is anything but complacent.

“Buy The Hell Out Of Gold”
The latest word is that China will begin trading a yuan-based oil contract soon after the lunar New Year, some time in late February. The trading will take place in the same Shanghai free trade zone where China allows gold to trade. China knows time is getting short. The gold-based monetary system is on its way.

It all raises the chance that gold’s explosive take-off could come this year. In the late 1930s and during WWII, the U.S. was able to marshal an extraordinary amount of resources and technologies and talent to conquer a horrible enemy. Today our own complacency is our biggest foe, more than China or any other country. I hope we will wake up before it’s too late. Meanwhile, buy the hell out of gold.”

***KWN has just released the powerful audio interview with Egon von Greyerz and you can listen to it by CLICK HERE OR ON THE IMAGE BELOW.

Big Move Coming For Gold & Miners, Plus This Hasn’t Happened In 50 Years!