Bank of England Vaulted Gold Has Plunged 258 Tonnes During Selloff

Where did the 258 tonnes of gold go that has left the Bank of England’s vault?

BoE Vaulted Gold Has Plunged During Selloff
July 8 (King World News) – Alasdair Macleod:  In a febrile atmosphere, gold and silver futures continued to slide priced in dollars this week. Gold was down $72 from last Friday’s close at $1738 in European trade this morning, and silver down 72 cents at $19.12. Volumes in the Comex gold contract were high, while in silver, less so. 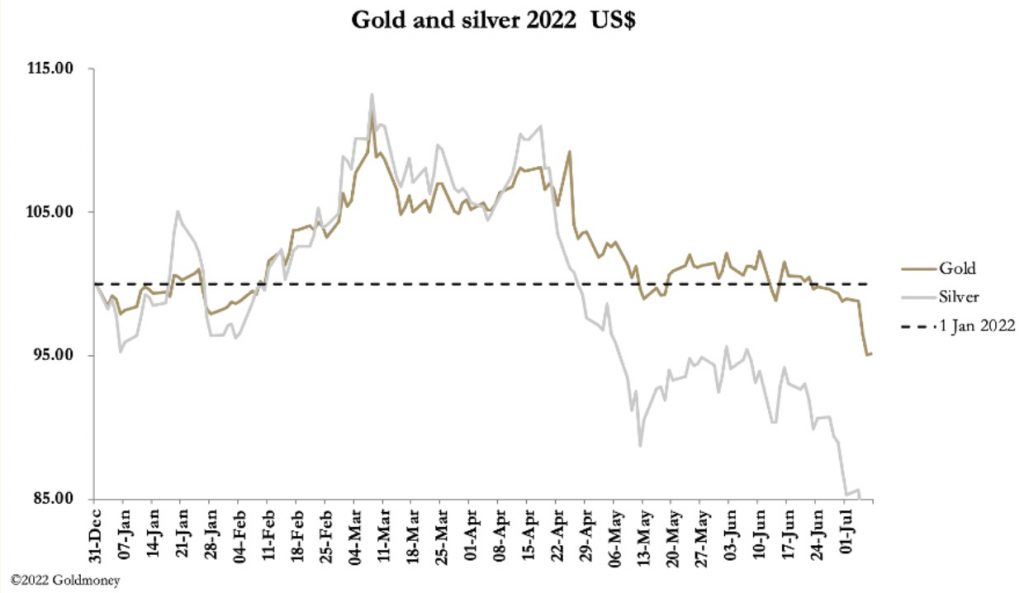 The combination of a fall in price on high volumes following previous declines is symptomatic of a final sell off ahead of a trend reversal. That it is more evident in gold is probably a reflection of a few remaining hedge fund longs yet to be closed, and hedge funds tossing out new bear positions in favour of a strong dollar trade weighted index. The TWI is our next chart. 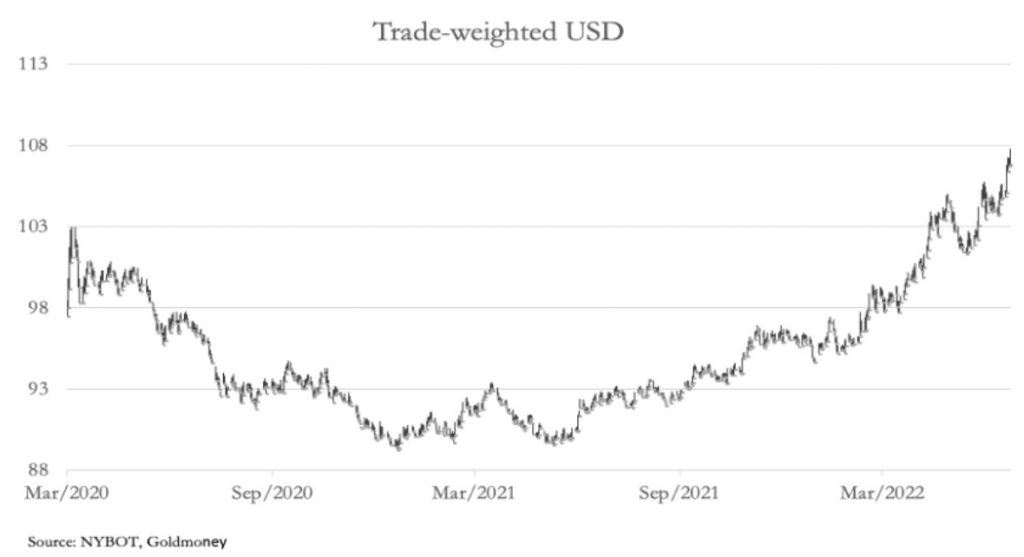 Due to the dollar’s relative strength, they are the worst measure of gold’s performance. Our next chart shows gold priced in the four major currencies, and the result is striking. 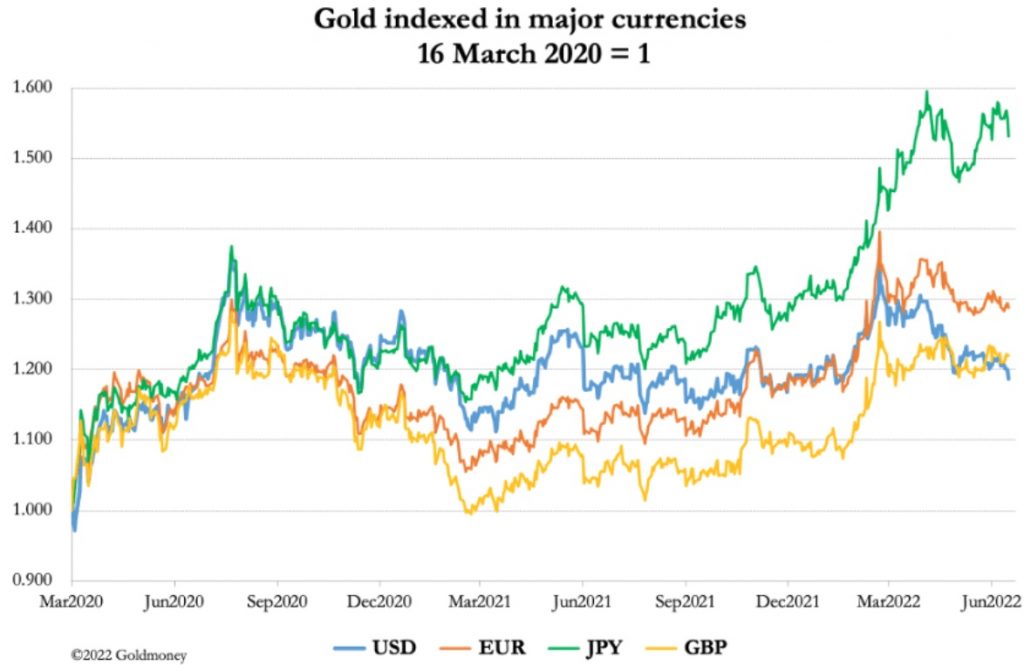 The dollar’s TWI performance is little more than a rally in its declining purchasing power, measured at an annual rate of about 9%, according to the CPI. As the reserve currency, it only benefits from a flight out of the others. The dollar price of gold is a temporary victim of a developing currency crisis for the other three, most notably the yen. The only question is how it is to be resolved.

The economic debate is shifting from growing fears of price inflation to growing fears of recession. And gold bugs must realise that the players in derivative markets record their performance predominantly in dollars, and never run their balance sheets in gold. For this reason, the initial crisis response is usually to set off a flight into the dollar, even liquidating paper gold positions to do so.

Instead of fretting over paper gold prices, we should watch what central banks are doing with real money. We know from various reports that they are accumulating physical bullion. According to the World Gold Council’s figures, from December last year, central banks reported additions of a net 109.7 tonnes of gold. Much of this will have been accumulated through London, which is the major gold trading hub for declared gold reserves. Yet, the amount stored at the Bank of England has declined as the chart below illustrates. 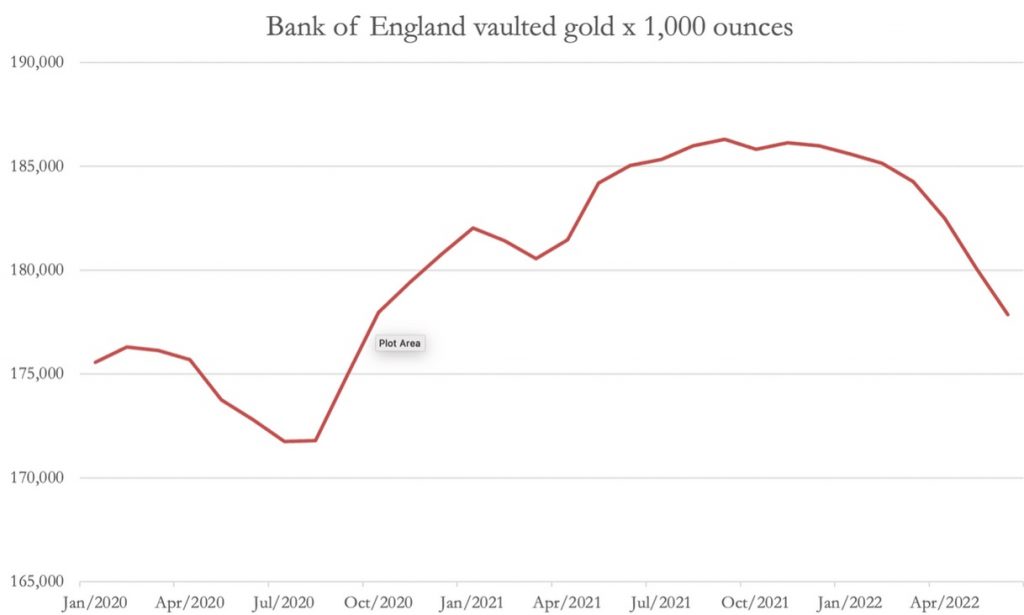 Over the same period as the WGC figures, the Bank’s vaulted gold declined by 8,286,000 ounces, or 258 tonnes. So not only are central banks accumulating extra bullion, but they are withdrawing all of it and more from the West’s financial system.

One can only conclude that while the hedge funds and other investors are panicking into paper dollars, the creators of fiat currencies are battening down their hatches by accumulating real money, which legally is and always has been gold.

Central Banks See Massive $2.2 Billion In Losses On Gold Shorts, But Here Is Why It May Get Much Worse