On the heels of the move by the Bank of England to  lower rates and increase QE, look at who is really getting crushed by the BoE’s move.

A portion of today’s note from Art Cashin:  The BOE Makes Its Moves – The Bank of England made a series of moves this morning. I will defer to my friend, Peter Boockvar of the Lindsey Group, who as usual has a quick and typically lucid analysis. Here’s a bit of what he wrote:

Not only did the BoE cut interest rates by 25 bps as fully expected, they expanded sovereign QE by 60b to 435b from 375b pounds and they are adding a corporate bond buying program but that is modest, just 10b pounds over the next 1 1⁄2 years. They also added a short term lending program for banks to cushion the impact of low rates. The vote was 9-0 to cut rates but there were 3 dissents on sovereign QE and 1 on the corporate bond buying. As to be expected the pound is getting hammered and gilts are spiking higher with the 10 yr falling by 16 bps. Their 2s/10s spread is narrowing by 4 bps to the lowest in 8 years. Sorry banking system.

Bottom line, the BoE is now falling further into the same trap as the Fed, BoJ and ECB and for some reason hoping to see a different result. An even lower cost of money is not going to change any behavior but at the same time an ever flatter yield curve will further damage bank profitability. Pension funds, insurance companies and savers will be further starved for returns. Unfunded pensions will suck further funding from corporations away from growth initiatives. Further down the line, as the Fed is experiencing now, how does the BoE expect to get out of this. I thought for a moment that maybe Mark Carney was different than his peers but he today has proven that he is just the same as the others in believing too highly of the abilities of central banks to generate economic growth and showing no sense of humility about their effectiveness. Creating asset bubbles is their only real skill set.

The multiple BOE moves were a good deal more extensive than many had expected. The pound fell and most stock futures rallied.

Overnight And Overseas – In Asia, most markets have moved higher with Tokyo leading the way.

In Europe, stocks were up and added to their gains on the BOE moves.

Gold and oil are down a bit and treasury yields are a touch softer after the BOE.

Consensus – The rather extensive BOE moves indicate some real concern and thus may inhibit the Fed a bit more. Keep an eye on oil to see if the reversal holds.

King World News note:  Despite the additional weakness in the British Pound, it is important to note that commercial traders are now the most long the British Pound than they have ever been in history! (See stunning 23-year chart below).

Commercial Traders Now Most Net-Long The British Pound In History! 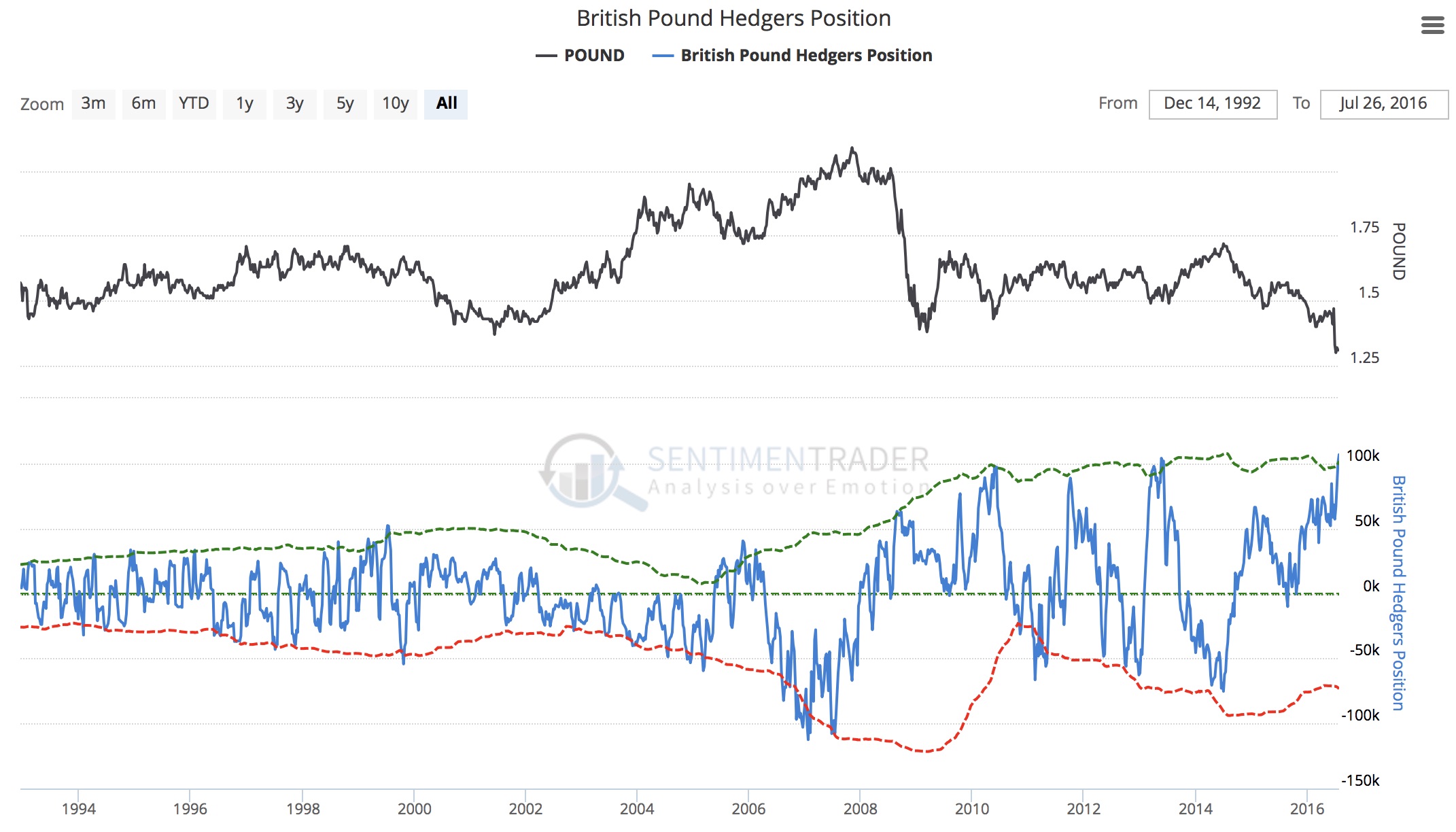