As we approach the end of the third trading week in April, here is what you need to know ahead of Good Friday.

1775
April 18 (King World News) – From legend Art Cashin:  On this day in 1775, there occurred one of the best known yet most misunderstood events in American history. Thanks to Longfellow’s famous poem, popularly but mistakenly called, “The Midnight Ride of Paul Revere,” nearly every schoolchild has heard of “that famous day and year.”

But most of the image of the poem, while stirring, is not correct. Revere was not a volunteer. He didn’t ride alone. He never finished the ride and he didn’t hang any lanterns in the Old North Church.

Actually, Revere’s heritage was French. He was Appollos Rivoire before a name change. Revere was a patriot, of course. He was one of the “Indians” at the Boston Tea Party. He had been active in many pre-revolutionary groups. But that night he was serving as a paid messenger, a role he had often before served. (He actually submitted a bill for his famous ride.) Historians also believe the ride started at a time earlier than midnight.

The lanterns signaling “one if by land and two if by sea” were actually set by church sexton, Robert Newman. The signal meant the British regulars were setting out to arrest John Hancock and Samuel Adams (two higher profile patriots) at Lexington and then to seize a stash of revolutionary arms and gunpowder at Concord. 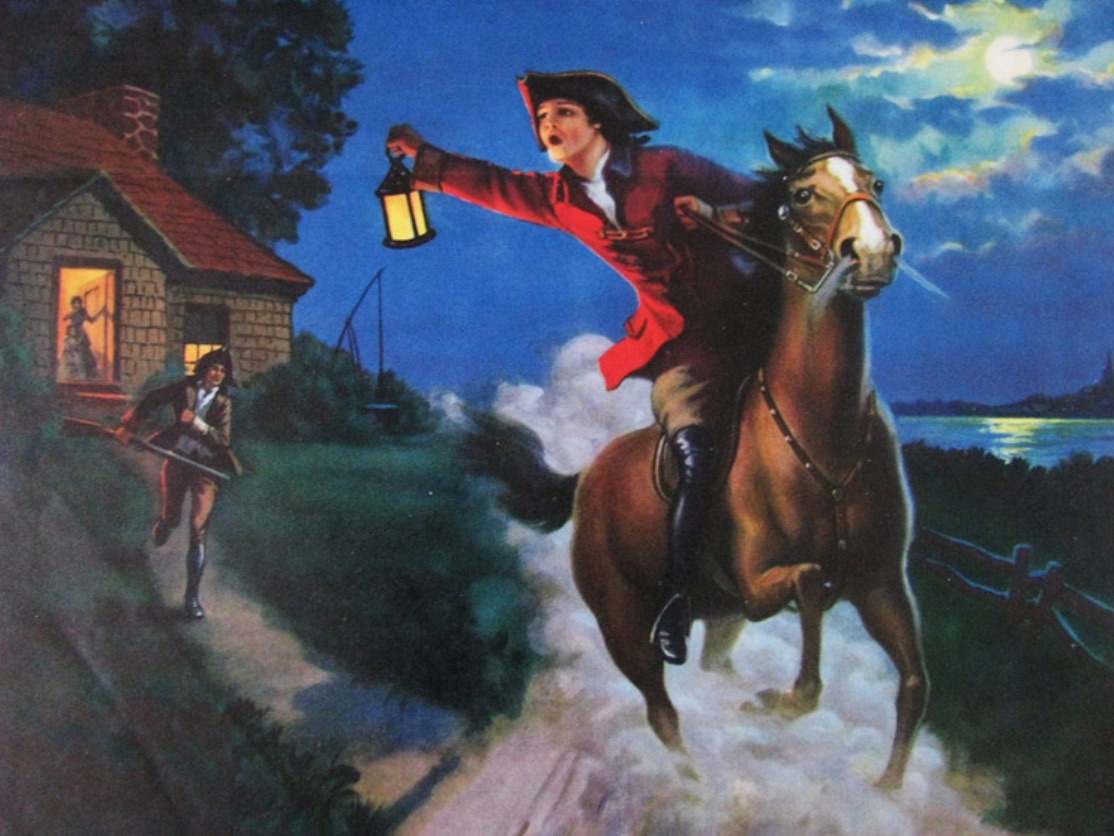 Revere and a co-rider William Dawes rented horses and set out on their ride. They made it to Lexington, warning Adams and Hancock. They were joined by Dr. Samuel Prescott. On the way to Concord, Dawes and Revere were arrested. (Speeding?) Prescott, however got through and so the patriots were ready the next day to fire “the shot heard round the world.”

And sources say that Revere didn’t shout, “The British are coming!” Rather it is believed he called out – “Awake! The Regulars are out!” (How riveting.)

And finally despite thousands of barroom bets that Revere’s horse was “Brown Betty”, no one knows the name of the horse. (Not even the Boston Historical Society – it was rented after all!)

If the market was trying to send a signal Wednesday, it was certainly a mixed signal. Stocks waffled in a relatively narrow range in continuing light volume.

The indecisiveness was evident from the opening bell. IBM’s earnings were a bit better than expected but revenues fell short and that weighed on the stock throughout the day. The weakness in IBM weighed on the Dow.

The healthcare sector was also under pressure as concerns continued about political pressure and proposals on the sector.

In a pattern that has developed over recent days, the indices popped higher on the opening and then instantly reversed to the downside.

Luckily for the bulls, the early pullback in the Dow held at the lows from Tuesday’s trading.
The Dow would retest that level again at noon but in both cases the retests only produced a mild bounce.

The selling was a touch heavier in Nasdaq and the S&P, with both those indices hitting the day’s lows shortly after 2:00.

The healthcare sector was the big loser, falling 3% on the day. The fear of political disruption in the health sector has sent it over 6.6% lower in the month of April.

Qualcomm continued to benefit from its settlement with Apple. The strength in Qualcomm seemed to put a bid under the tech sector in general.

Crude continued to stall as traders tried to balance the fighting in Libya against reports of economic slowing in Europe and elsewhere.

Overall, the bulls chalked Wednesday’s indecisive action to just another consolidation day as markets digest some of this month’s run-up.

There were, however, some technical anomalies, which we’ll try to go into next week.

Seasonal Questions Pop Up Again – This, as you may have noticed, is a four day week. That’s because U.S. equity markets are going to be closed for Good Friday. Every year, the Good Friday closure produces lots of erroneous theories about why we close. So, once again, we offer the explanation we wrote a few years back:

The Myth Of The Crash That Caused The Stock Market To Close On Good Friday – In the nearly five decades that I’ve been in Wall Street, each Easter season sees the re-blooming of an old – and erroneous – myth.

Thanks to the nice folks in the NYSE archives we were able to establish a few facts. Records clearly show the NYSE closed on Good Friday as far back as 1864. Before 1864 records on the subject are a bit harder to find but there is high likelihood that the Exchange closed on Good Friday all the way back to 1793. (It was founded on May 17th, 1792 so Good Friday would have already passed that year.)

There was a famous and terrible Black Friday crash in Wall Street but it was primarily in the gold market. It came about when the “corner” on gold that Jay Gould and Jim Fisk had constructed (with some help from President Grant’s brother-in-law), collapsed. That occurred on September 24th, 1869, a little late in the year for Good Friday. You will also note from the search of the records that the NYSE was closing on Good Friday at least five years earlier and probably, much, much longer.

I hope that puts the myth to bed.

Stocks are mixed in Europe. London is a bit lower, while markets are up modestly in Paris and Frankfurt.

Among other assets, Bitcoin is higher, trading just under $5300. Gold and crude are basically flat. The euro is a touch softer against the dollar, while yields are down a tick or two.

Consensus – Holiday closings are beginning. Denmark and Norway closed. Sweden has a half day. London will be closed tomorrow and Monday. Bonds will close at 2:00 today in the U.S.

***Also just released: “The Risk Is That We Have A Melt Up, Not A Melt Down” CLICK HERE TO READ.