Today King World News interviewed a man who has been uncovering critical information for 25 years who spoke about the dramatic and sudden move in France to repatriate their gold, and what is going to cause all hell to break loose and the price of gold to skyrocket.  Below Steve Quayle takes KWN readers around the world on another trip down the rabbit hole of Western lies, propaganda, and missing gold.

Eric King:  “It’s fascinating what just happened in France with Le Pen demanding that the French repatriate their gold held abroad and put an end to further gold sales.  I say ‘fascinating’ because here is what former French leader Charles De Gaulle said in 1965: 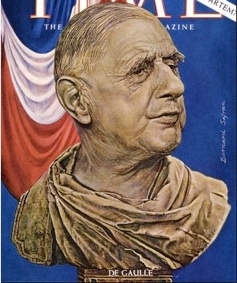 French leader Charles De Gaulle in 1965:  “The fact that many countries, accept as a principle, dollars being as good as gold, for the payment of the differences existing to their advantage in the American balance of trade. This fact, leads Americans, to get into debt and to get into debt for free at the expense of other countries. Because what the US owes them it is paid, at least in part, with dollars the are the only one allowed to emit. Considering the serious consequences a crisis would have in such a domain, we think that measures must be taken on time to avoid it. We consider necessary that international trade be established as it was the case before the great misfortunes of the world, on a indisputable monetary base, and one that does not bear the mark of any particular country. Which base? In truth, no one see, how one could really have any standard criterion other than gold!”

Eric King continues:  “So we’ve now had Marine Le Pen send this letter to the French central bank demanding the repatriation of the French gold held abroad and an end to further gold sales.  Obviously key people in France know that the United States doesn’t have the gold and so they better make a move to get their gold repatriated in a hurry.  It also appears the spirit of Charles De Gaulle is alive and well in France.”

Quayle:  “Someone has yelled, ‘fire,’ and so we now have nations in Europe and elsewhere rushing to get their gold back.  So instead of one domino falling, it appears that multiple rows of dominos may be tumbling.  And notice the timing of the countries wanting to repatriate their gold….

To hear which company has one of the highest grade gold projects in
one of the world’s most mining friendly countries and offers
investors massive blue sky click on the logo below:

“The French and Dutch have just sent a message to the Swiss that they should vote yes on the upcoming Swiss Gold Initiative that Egon von Greyerz has been talking about.  People forget that the French share a common border with the Swiss.  What is happening right now is very historic.  What’s taking place, it’s like when the fuel rods go into the nuclear reactor to create a critical mass.

One of the things that is remarkable to me is that the lead force driving these countries to repatriate their gold that is deposited in the United States and elsewhere is they see the major currencies of the world being recklessly debased in lunatic fashion.”

Eric King:  “Is word getting out that the fractional reserve Ponzi scheme that is run in the United States and London coming to an end?”

Quayle:  “Absolutely.  That’s why countries who are in the know are moving so quickly to get their gold before it’s too late.  And what is true price discovery for gold?  I don’t know but like James Turk said in his interview with you, ‘It’s going to be a hell of a lot higher than what we are currently seeing quoted.’  Think about what that will do to the value of all the gold the Russians and the Chinese have accumulated on the cheap.  The value of that gold will go through the roof.  And think about how furious the countries and the citizens of those countries will be when they don’t get their gold back from the United States and London after gold has skyrocketed in price.

And the final nail in the coffin for the West is still to come.  That is when the Chinese and the Russians open up their vaults for a true independent audit and come together to form a currency bloc that includes gold backing in the East.  That is when all hell is going to break loose and the U.S. dollar will go into freefall.” If you are interested in purchasing physical gold and silver for delivery you can call Steve Quayle or his staff at (406)586-4842, or you can email them at [email protected]