As we head into 2021, here is another gold record plus a final New Year’s stop.

Final New Year’s Stop
Danielle DiMartino Booth at Quill Intelligence:  Let’s make our final New Year’s tour stop in Argentina where they’ve plenty of creative ways of ringing out the old. Today they will shred old documents to symbolically leave the past behind. Around noon, people throw the scraps of paper from their windows in a celebratory shower of confetti. Come midnight, be careful to take that first step forward with your right foot such that you start the year off on the right foot. This next one should be adopted globally this year — Argentines run around the house, suitcase in hand, to ensure the good fortune of more travel in the coming year. If you really want to go places, to farther flung destinations, run your suitcase around the block instead. Finally, there’s the traditional consumption of beans, similar to the U.S.’s eating black-eyed peas, meant to safeguard one’s present job or bring new and better opportunities in the New Year.

Just in from the bean department… Argentina’s port and grain union workers have ended a 20-day strike after an agreement was reached on Tuesday following government intervention. A major work stoppage that left more than 150 grain ships stranded at the country’s ports has been lifted. Workers were demanding a wage increase, holding back cargo ships at a crucial time just as the export season ramps up. Being one of the world’s top soybean, corn and wheat suppliers, the Argentinian strike has swayed markets these last few weeks and spurred a global rally in grain prices…

The trade war has served as a reminder that the U.S. is the world’s second largest soybean producer, just ahead of Argentina but still trailing the top spot holder of Brazil. The recent market disruption extended a rally that began in late August, pushing soybean futures from just under $9 per bushel to $13 yesterday, a six-year high. From a U.S. perspective, the timing couldn’t have been more fortuitous given the fourth quarter is the seasonally strongest period for oilseed and grain exports to one of our largest trading partners, China. True to script, U.S. oilseed and grain exports to China posted a record $3.8 billion in October 2020, the latest month available.

That’s an undeniable “win” for U.S. farmers, right? The first part of the U.S./China trade agreement was indeed designed to benefit the soybean complex via increased Middle Kingdom purchases. That said, one look at yesterday’s U.S. advance goods trade deficit hitting an all-time high $84.8 billion revealed global trade had ultimately flowed in the wrong direction for the outgoing Trump Administration. Moreover, the Coronashock overlapped the biggest nine-month widening in the goods deficit on record, a $26.0 billion expansion from February to November. 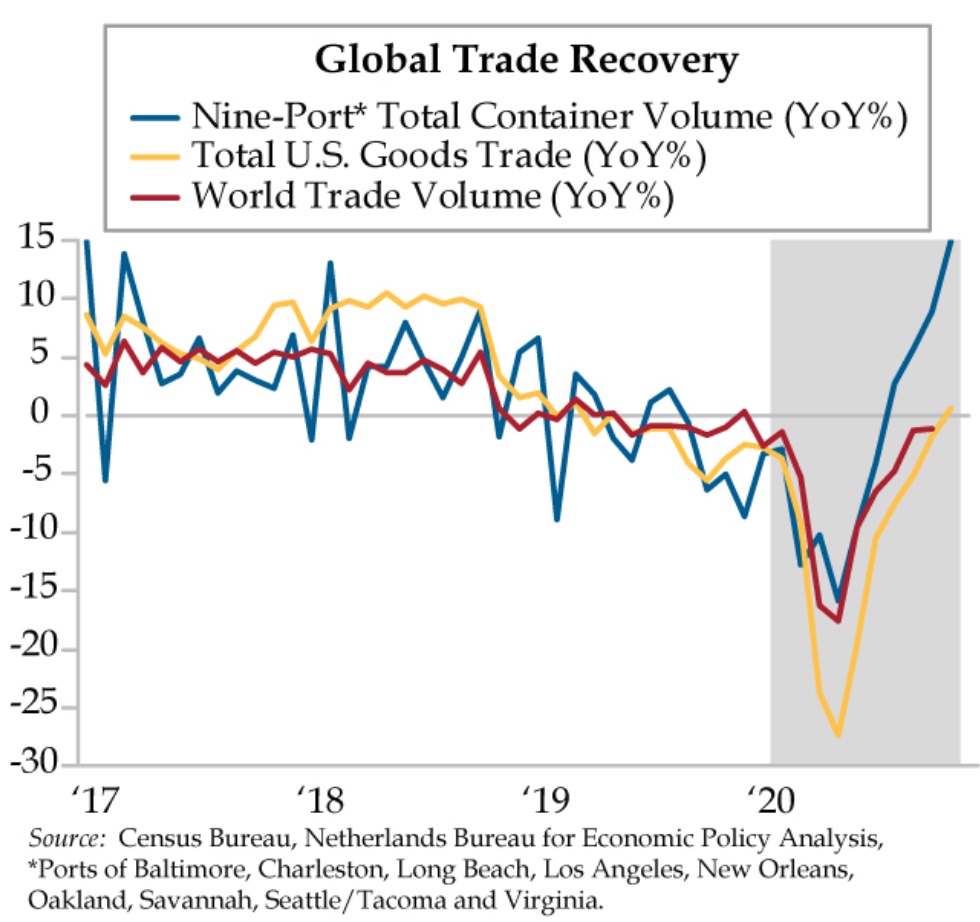 Getting back to soybeans, their seasonal surge helped propel oilseed and grain exports to China to $12.3 billion in the 12 months ended October (purple shaded area). 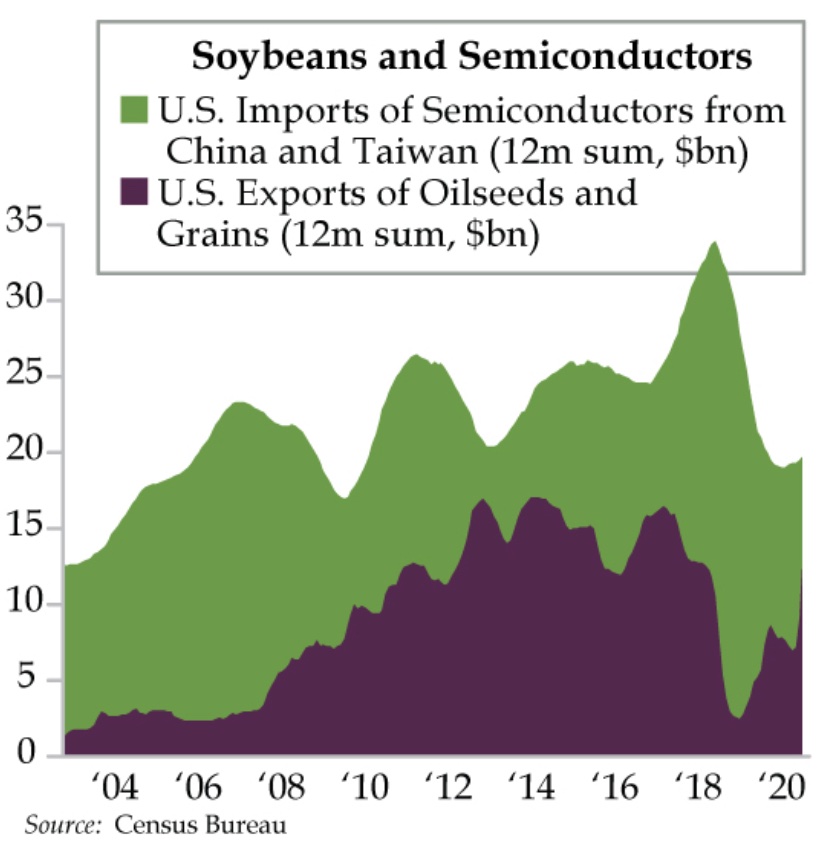 The significant improvement continues to fill the hole opened by the trade war and COVID. Despite October’s stellar showing, the annual export run is still several billion shy its all-time highs.

We contrast the soybean story with semiconductor imports from both China and Taiwan (green shaded area) to illustrate a point. At no time in the overlapping history from 2003 forward have grain exports to China ever exceeded semiconductors sourced in the U.S. from China and Taiwan. In sparring with China on trade, America’s focus on soybeans looks back to the old agricultural guard. Conversely, China is peering over the horizon, to the next generation of dominance they hope to achieve in the tech space (read: Huawei).

Disparate views on global trade can also be seen through the prism of America’s fascination with fossil fuels, fracking innovation, energy independence and the aim of becoming the world’s largest petro-exporter. China, on the other hand, has pivoted away from internal combustion engines to electric vehicles (read: Geely, which owns Volvo that plans to go all electric with a target of being halfway there by 2025).

As we look to the New Year, broader cyclical trends lend guarded optimism for the recovery phase to transition into expansion. Structural themes, however, overlay the faster moving cyclical narrative. We suggest you not lose sight of how very differently the U.S. and China envision our collective future.

We hope that this week’s journey into New Year’s Eve traditions might see you trying new ones while tying one on. Lord knows, we will be eating 12 grapes, tossing furniture out the window and circling the block with our suitcases. Anything to harken better fortunes in 2021. From Quill’s family to yours, Happy New Year!