More market chaos across the globe as big cracks appear, plus one of the most shocking charts ever!

ONE OF THE MOST SHOCKING CHARTS:
20 Year Chart: Greatest Buying Opportunity
In History For Canadian Junior
Exploration Stocks!

More Chaos And Hardship Across The Globe
Peter Boockvar:  If there ever was a great advertisement for nuclear power, which is dependable, stable, and clean base load power, it was the front page of the Weekend Financial Times titled “Germany to restart old coal plants after Russia cuts back gas supplies.” This is the same Germany that decided foolishly years ago to shut down all their nuclear plants after the Fukushima accident that had nothing to do with the plant itself. We remain bullish on uranium and the companies that mine for it…

While we all debate the direction of inflation from here and analyze what the two most interest rate sensitive parts of the economy, housing and auto’s, will do in response to the rise in the cost of capital, Automotive News over the weekend had a story titled:

“The average new vehicle now costs nearly what a typical American – or even an entire household – makes in a year, but nobody seems all that concerned.”

Below is a chart of their affordability index. 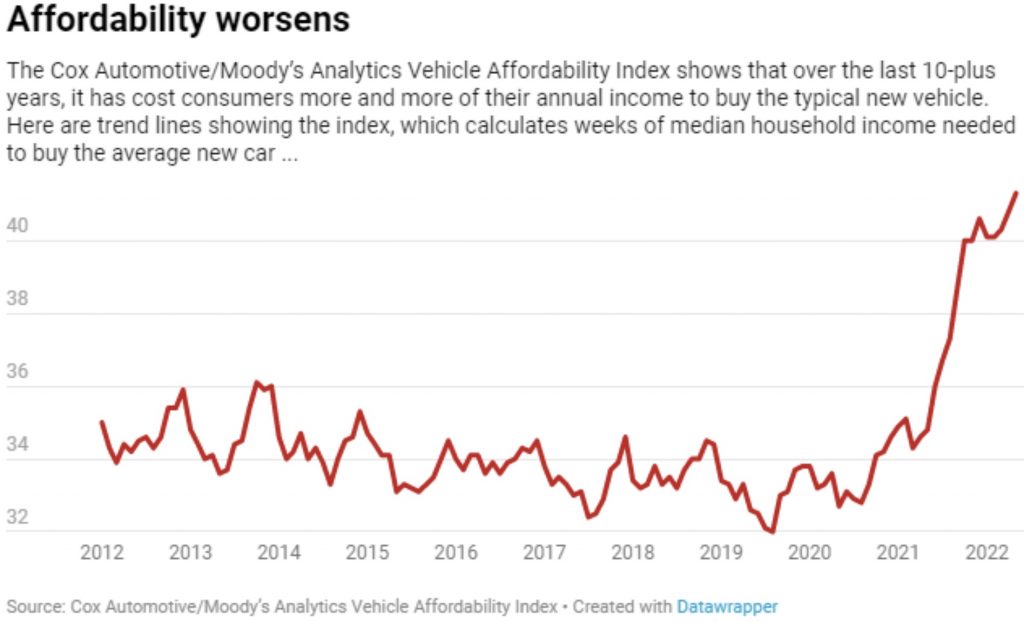 INFLATION GONE WILD: US Consumers Priced Out Of The Auto Market
According to J.D. Power, the “average transaction price reached a May record of $45,502” said the article and you can put it at $55,821 “when including factors such as financing” according to Cox Automotive and Moody’s Analytics, “a figure that represented 41.3 weeks of the $70,284 US median household income.”

The bottom line according to Automotive News:

“It’s all led to a market in which new vehicles typically cost more than the sticker price, used vehicles can cost as much as they were priced when new, and consumers are left wrestling with whether to pay today’s high amounts or sit on the sidelines – which plenty are choosing to do when it comes to new vehicles.”

The Cox Automotive’s chief economist had this bottom line in the piece:

“The typical US consumer has been priced out of the market.”

And now we have the rising cost of funding the purchase. When analyzing Fed policy and its impact, it’s easy to predict the response of the interest rate sensitive parts of the economy as that is what it directly impacts. Its influence on everything else is much more indirect.

Big Cracks Appear In The Foundation Of The Housing Market
Speaking of housing, Lennar in its earnings press release today said:

“While our 2nd quarter results demonstrate strength and excellent performance throughout the quarter, the weight of a rapid doubling of interest rates over six months, together with accelerated price appreciation, began to drive buyers in many markets to pause and reconsider. We began to see these effects after quarter end.

The Fed’s stated determination to curtail inflation through interest rate increases and QT have begun to have the desired effect of slowing sales in some markets and stalling price increases across the country. While we believe that there remains a significant shortage of dwellings, and especially workforce housing, in the US, the relationship between price and interest rates is going through a rebalance.”

“We recognize that current attempts at guidance are tantamount to ‘guessing’ and not ‘guiding.’ That will likely be the case for many companies who will soon be reporting earnings for Q2.”

Is This Really “Whatever It Takes” Or Just Desperate Jawboning?
Is ECB president Christine Lagarde giving her own version of Draghi’s ‘whatever it takes’ in dealing with the sovereign debt of peripheral Europe? She said:

King World News response:  Really? Because the bond bears have been kicking some serious ass in Japan. But I’m sure things are different in Europe (sarcasm).

Back To Reality
Peter Boockvar continues:  The Italian 10 yr yield is down 6 bps after rebounding by 11 bps yesterday and following the drop of last week’s intraweek high. It’s spread to the 10 yr bund yield is 187 bps after peaking at 242 bps last Tuesday. It was over 500 bps in the panic of 2011. The ECB though has yet to explain exactly how they will address ‘fragmentation‘ but it looks like they will favor the peripheral countries when allocating the reinvestment of maturing securities.

Swiss National Bank Submarines US Dollar Rally
We’ll soon see if last week’s surprise 50 bps rate hike from the SNB which resulted in a sharp rally in the Swiss franc marks the end of the US dollar rally which really only benefited from interest rate differentials rather than any other notable fundamental factor. I think the odds are high of that being the case.

REGARDING JAPAN: Big Trouble In The Land Of The Rising Sun
While the BoJ was successful in containing the 10 yr yield below .25%, the 40 yr yield keeps jumping and is at a fresh 6 1/2 yr high at 1.33%, up 7 bps in the past two days. The yen is back above 135 and all this reflects continued pressure on the BoJ notwithstanding their temporary success last week in their stubborn stance. 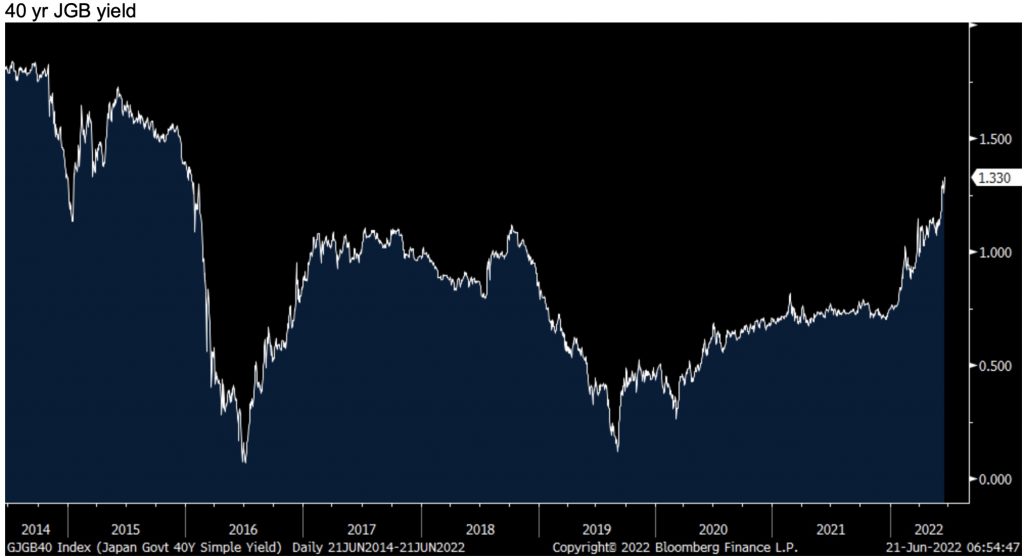 Trouble In The UK
The UK CBI industrial orders index in June fell to 18 from 26 and that was 3 pts under the estimate. CBI said “While manufacturing output is still being supported by a backlog of orders, growth appears to be softening. Stocks of finished goods are now seen as broadly adequate and we may be seeing the first signs that weaker activity is beginning to slow the pace of price increases in the sector.”

“Manufacturers continue to report a range of challenges, including significant cost pressures, shipping delays, shortages of key inputs, and, not least, recruitment difficulties. Skills shortages remain widespread and are a key constraint on growth. All of these trends are weighing on confidence.”

ALSO JUST RELEASED:  2022 MARKET DISASTER: The Worst Is Yet To Come CLICK HERE.