All-time record bets on a stock market crash are skyrocketing. This may be a contrarian indicator for the stock market bears.

Another Day, Another Record
October 11 (King World News) – Jason Goepfert at SentimenTrader:  Another round of options records.

Large traders once again buy record bets against stocks
Institutional traders have not given up betting on a crash. So far, it seems to be working for them.

Last week, the largest options traders in the market spent more than $10 billion on buying put options to open on individual equities. That is, by far, a record high and is nearing an all-time record spent by any group of traders on any options strategy ever. 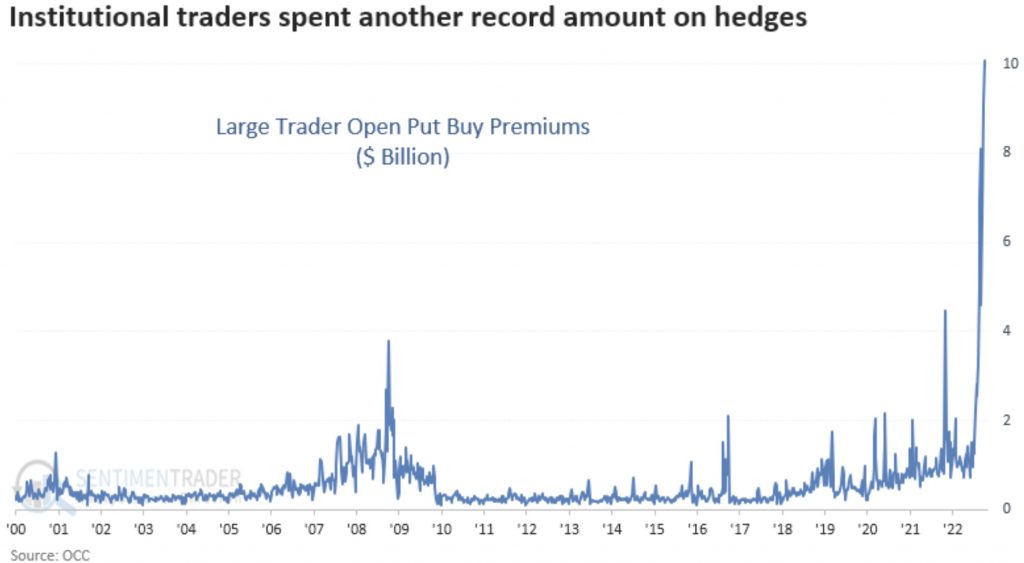 We often criticize those who only look at one side of the ledger and who don’t take context into account. So let’s incorporate the other side, which is the amount these traders spent buying call options to open. If we net those two out, last week’s activity is still far beyond anything seen before. It’s a mirror image of the end of October 2021, when speculative excess was in full force. 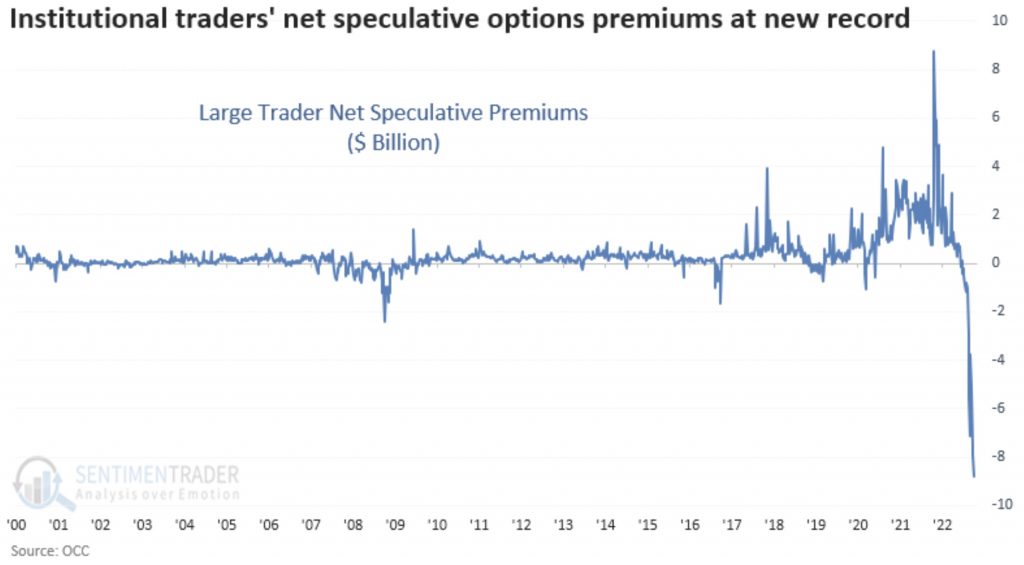 Now, for context. As a percentage of the total market capitalization of U.S. stocks, last week’s put buying was still quite a bit below October 2008. 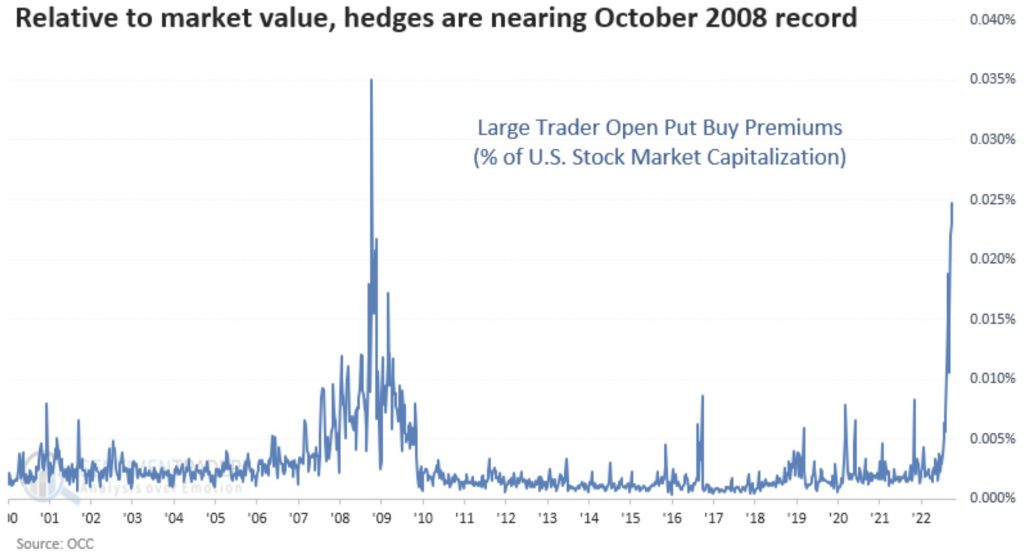 But when we net out the speculative activity and express it relative to market capitalization – the most honest, objective way to view this data – it’s on par with the week ending October 10, 2008. 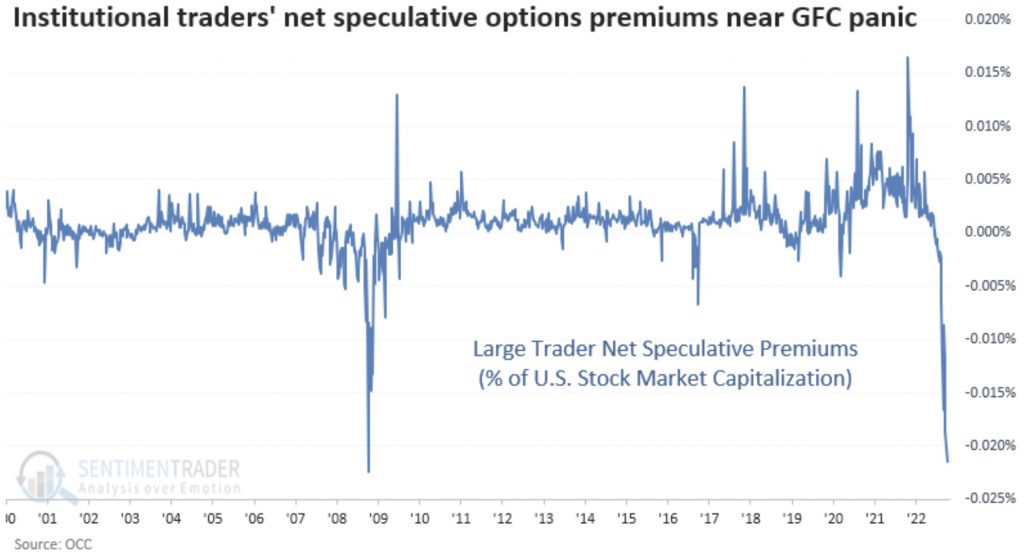 If we zoom in on that week, it wasn’t the exact low for stocks. From the low of that week, the S&P 500 jumped nearly 20% over the next 17 trading days. But then panic resumed anew, and the index fell nearly 12% from its October low into late November, and its ultimate low didn’t occur for 100 days, and another 20% loss. 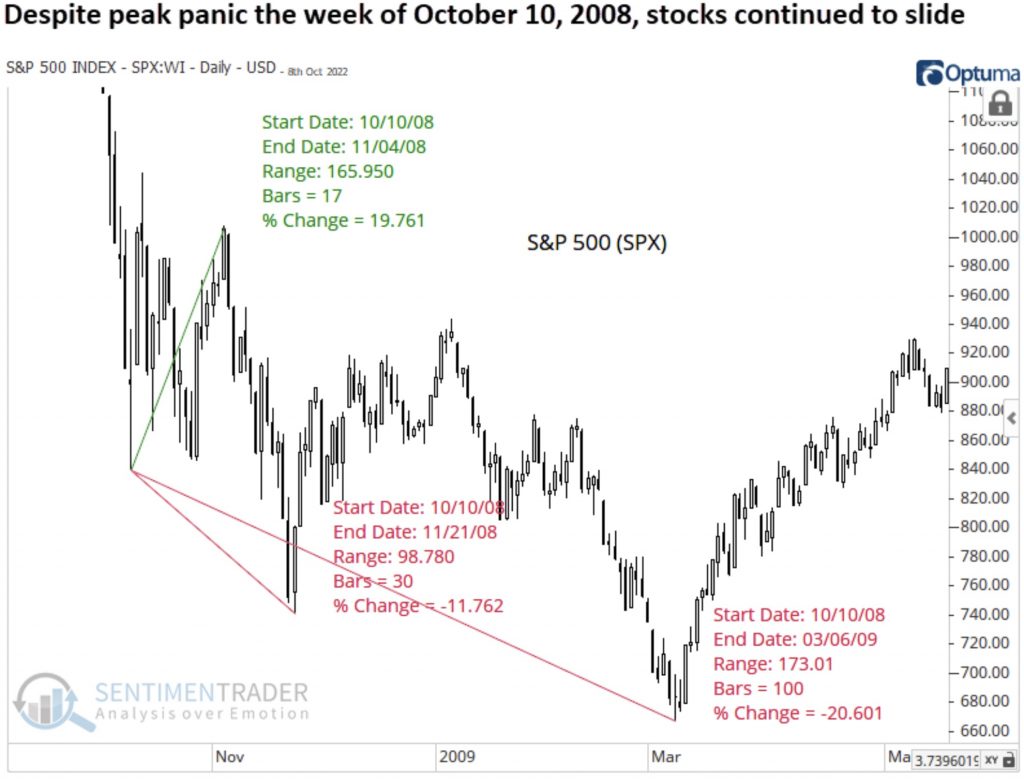 There is some evidence that the activity we’re seeing now is even more speculative (on the downside) than that from 2008. As the Wall Street Journal noted recently:

Options contracts that expire in less than a week make up about half of all activity in the U.S.-listed options market, according to the derivatives-analytics firm SpotGamma. That is up from around 45% last year and roughly a third of all activity in 2019.

“Speculators love them,” said Steve Sosnick, chief market strategist at the electronic brokerage Interactive Brokers, on options with the shortest expiries. “If you’re speculating, you don’t necessarily want to think about the move in three months-you want to think of the move tomorrow.”

What the research tells us…
Not all indicators agree, ever. I distinctly remember March 2009, when analysts said that stocks couldn’t possibly bottom because put/call ratios were showing too many bets on a rebound. That’s why we prefer to use weight-of-the-evidence and rely more on composite models and objective testing. We saw last week that sentiment conditions are ripe for a counter-trend move, and then there was a historic thrust that strongly tends to lead to higher prices. All of those are over a medium- to long-term time frame, and short-term volatility is expected. A sustained decline from these conditions would most assuredly not be. This is another example of why Jason Goepfert is the best in the world at what he does – providing actionable market data. To subscribe to the internationally acclaimed work Goepfert produces at SentimenTrader CLICK HERE.

Mathew Schwab, Kraken Energy’s CEO, commented: “With an approved drilling permit now in hand, we are ready to commence the Phase I drilling program at our newly acquired Garfield Hills property. Through multiple reconnaissance field visits this summer, our team has identified several highly compelling exploration targets on which we plan to complete up to 5,000 m of HQ drilling.”

Kraken Energy is a new energy company advancing both its newly acquired Garfield Hills uranium project and its Apex uranium project, Nevada’s largest past-producing uranium mine. Stock symbol UUSA in Canada and UUSAF in the US.

***To listen to Alasdair Macleod discuss the unfolding banking crisis and how it will impact major markets including gold and silver CLICK HERE OR ON THE IMAGE BELOW.