Albert Edwards On The Japanification Of The United States, Plus Hard To Believe, Deflation, And The Sad Truth

Today former Global Strategist at Société Générale Albert Edwards discussed the Japanification of the United States. Plus a look at hard to believe, deflation, and the sad truth.

Deflation?
October 8 (King World News) – Frederik Ducrozet, Global Macro Strategist:  ECB accounts quoting Philip Lane on inflation: “While temporary factors had distorted the August figure, underlying price pressures had likely weakened owing to subdued demand and significant labour market slack.” Voilà. Also Lane: “there was a clear risk that the negative shock to the path of inflation as a result of the pandemic could give rise to a renewed downward trend in inflation expectations.” Voilà voilà.

Japanification Of The US
Albert Edwards, Former Global Strategist at Société Générale:  Indeed ECB Chief Economist Lane (quoted above) is right. Eurozone Inflation expectations 5y/5y had only just come to terms with 1% inflation. And now it will need to catch up with the new reality of zero! Does anyone really still believe this Japanification won’t be heading to the US soon? (See chart below). 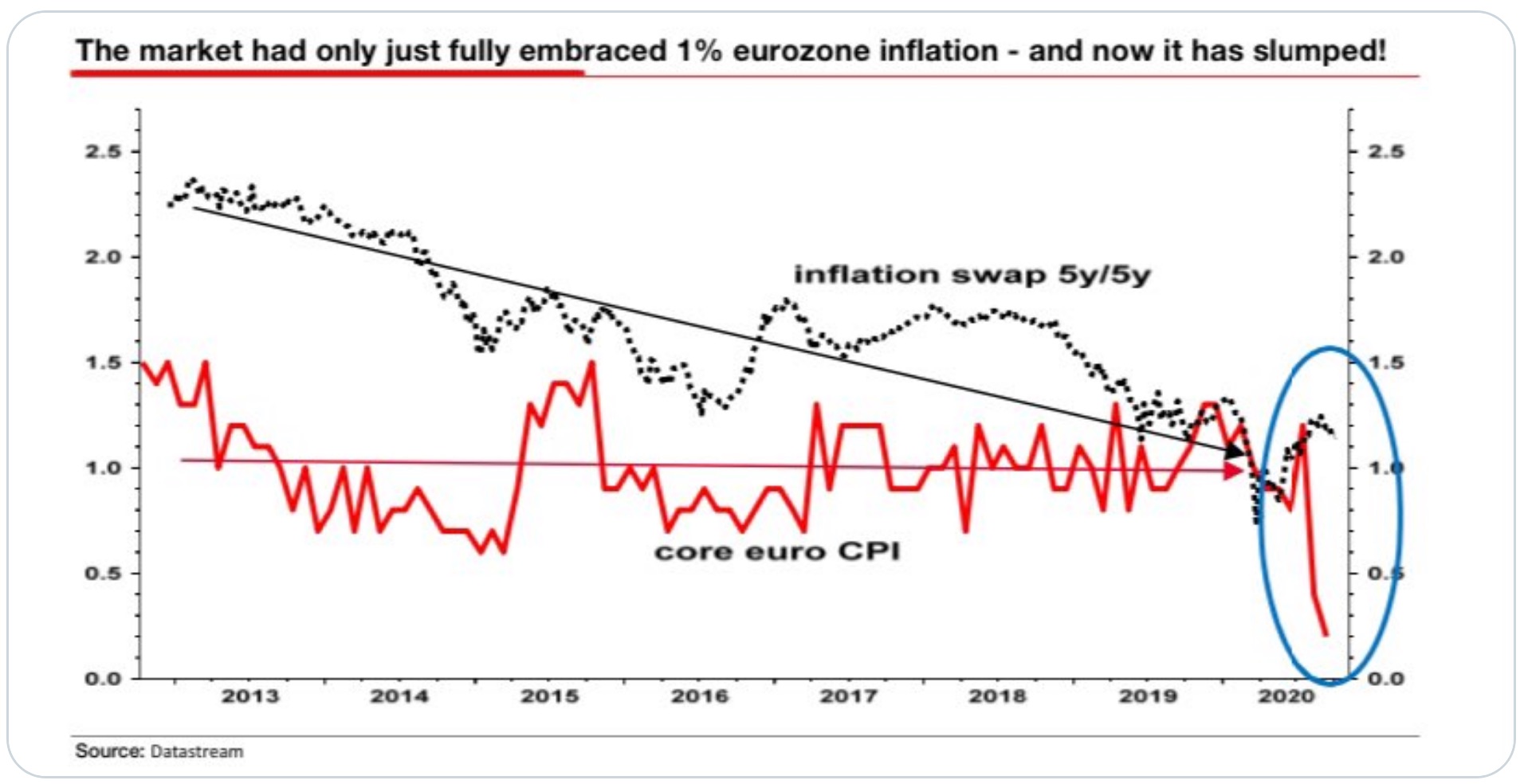 Hard To Believe
Otavio Costa:  Almost every economic indicator has somewhat bounced since the pandemic lows. Fiscal deficit? Still with the pedal to the floor. Debt imbalances are piling up at an absurd pace. (See chart below).

This Is Totally Out Of Control And Unsustainable 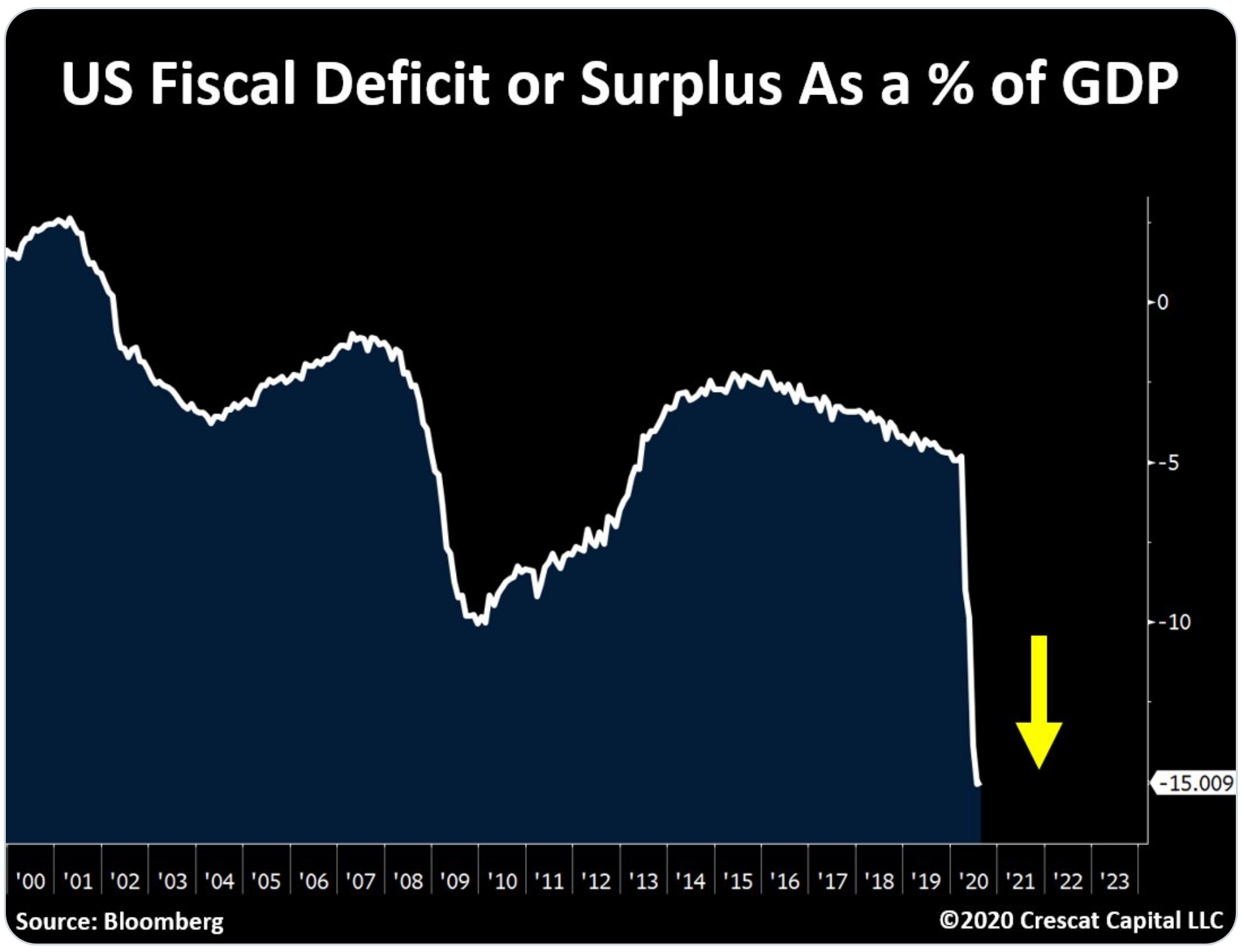 The Eagle Has Landed
Eric King:  “Obviously this deal that was just announced with Agnico Eagle is very big news.”

Strategic Investment And Partnership With Agnico Eagle
Matthew Hornor:  “In a word, it’s completely transformational for us. We have now checked all of the boxes in order for the market to understand and believe that our future potential is astronomical. We have the best partner on the planet that we could have hoped for. Agnico Eagle is the biggest gold producer in Quebec.

The project they are contributing to the joint venture is a past high-grade producer. It produced more than a million ounces at almost 6 grams per tonne of gold. They stopped production in the 1990s when the price of gold was in the $300 range. We believe they left a lot of gold behind and we are extremely excited to combine the two projects — the Joutel Project and the Douay Project — with Agnico Eagle.

Over $30 Million Of Cash And Committed Funding
It’s worth mentioning that Canadian Malartic, one of the largest gold producing gold projects in Canada and the world is operated jointly by Agnico Eagle and Yamana Gold. So Agnico Eagle knows what to do with these kind of projects in Quebec. And Agnico Eagle has now bought a significant stake in Maple Gold and is also contributing their expertise and their capital in the ground to execute drilling so we don’t have to raise money again.

They have purchased this stake in our company at a roughly 50% premium to our share price, and with the commitments they have made going forward that leaves us extremely well funded with $12 million in the bank and Maple Gold now benefits from more than $30 million of available cash and committed JV funds combined.

Agnico Eagle To Assist With Any Project Funding
And if we take this project to production, Agnico Eagle has also promised to assist us with project financing. So what we announced today transforms Maple Gold Mines into what we believe will be the next preeminent gold company in Canada.

As I have said in numerous interviews over the past few years, what this company needed was that big brother strategic partner. And I cannot stress enough how pleased we are to have closed this deal with Agnico Eagle, which is the best in the business quite frankly, especially given Agnico’s prowess in Quebec specifically. They are the #1 gold producer in Quebec and they know the geology better than anybody.” Maple Gold Mines, symbol MGM in Canada and MGMLF in the US.

Investors Intelligence Says Here Is The Key To A Turnaround In Gold & Silver!