2022 Will Be The Year The Gold Bull Stampedes

It appears that 2022 will be the year the gold bull stampedes.

5 Reasons Why 2022 Will Be a Golden Year for Gold
January 17 (King World News) – Ronald Stoeferle at Incrementum AG:  2021 was a disappointing year for gold investors, especially as inflation rates have surged dramatically during the year, rising in the US from 1.4 percent in January to 7.0 percent yoy in December, the  largest 12-month increase since the period ending June 1982. Still, in many currencies gold struggled over the course of the year. And in those currencies in which the gold price recorded a gain, the gain was small relative to the sharp rise in inflation.

This sideways movement is, however, not a sign of gold’s decline, but of its fundamental strength. If you listen to the nervous Nellies in the gold community, you might think that the gold price had collapsed by 50 percent or even more. However, when you widen the perspective, gold’s performance over the past few months, which has fluctuated between USD 1,700 and USD 1,900, seems like an interim breather, not the beginning of a bear market.

And there are many more reasons why 2022 will become a golden year for gold.

1. Inflation will remain at elevated levels
In the end, it was a predictable surrender, when Jerome Powell conceded that the elevated level of inflation is not transitory. And Christine Lagarde will have to give up her stubborn position that inflation is only of transitory nature, or hump-shaped, as she predicted in early December 2021 . Inflationary pressure will remain significant in the short-term.

Inflationary pressure will also remain elevated in the medium and even long term, as several fundamental changes – economically, politically, psychologically, and demographically take place as we speak. The In Gold We Trust special titled “The Boy Who Cried Wolf: Is an Inflationary Decade Ahead?” offers a comprehensive look at these multi-layered structural changes, Ronald-Peter Stoeferle’s keynote speech, “The Monetary Tipping Point” provides an update to these fundamental changes. Of course, that does not mean that inflation rates will continue to rise but that the inflation level will remain elevated, i.e., (well) above central banks’ inflation targets.

Record rises of producer prices around the globe support our view. Producer prices in the US are up 9.6 percent year-on-year, in China 12.9 percent, and in the euro zone a staggering 21.9 percent. Contrary to the mainstream view, inflation is not limited to energy prices, as more than 80 percent of CPI components have recorded an inflation of 2.5 percent or more…

2. Monetary policy remains very accommodative
Central banks will hardly be able to tighten monetary policy significantly. One reason for this is the elevated level of debt in all three sectors of the economy – government, non-financial corporations and private households. This is because the higher the level of debt, the greater the impact of interest rate hikes on the debtor’s ability to pay. According to data from the “International Monetary Fund,” global debt increased by 28 percentage points to 256 percent of global GDP in 2020. Although government debt recorded the strongest increase, rising by 19 percentage points to 99 percent of gross domestic product, private debt, consisting of households and companies, also increased significantly, by 14 percentage points to 178 percent of gross domestic product. Data for 2021 are not yet available. In the US, for example, the Congressional Budget Office (CBO) has calculated that even under a moderate increase in yields, interest service will rise from the current 1.4 percent of GDP to an unfinanceable 8.6 percent in 2051. In a further scenario considered by CBO, which is still far short of extreme, interest service could reach 15.8 percent.

At best, central banks will manage to tighten their monetary policy from ultra-loose to loose, as central banks will abandon the normalization process when the inevitable consequences of even a slightly tighter monetary policy begin to play out on financial markets as well as in the real economy. We are quite certain that this will be the shortest and shallowest rate-hike campaign in the history of the Federal Reserve.

3. Real interest will remain negative
To bet against gold at this point is to bet that central bankers will actually be able to implement a less accommodative monetary policy and stay the course when, in response to tapering and rate hikes, markets plunge, interest rates rise, and the economy cools. Our take is that central banks will fail this test. As a result, real yields will remain in negative territory for much longer than even pessimists think. To put it differently: Financial repression is there to stay. And as the following chart clearly shows, negative real yields are the foundation for every bull market in gold. 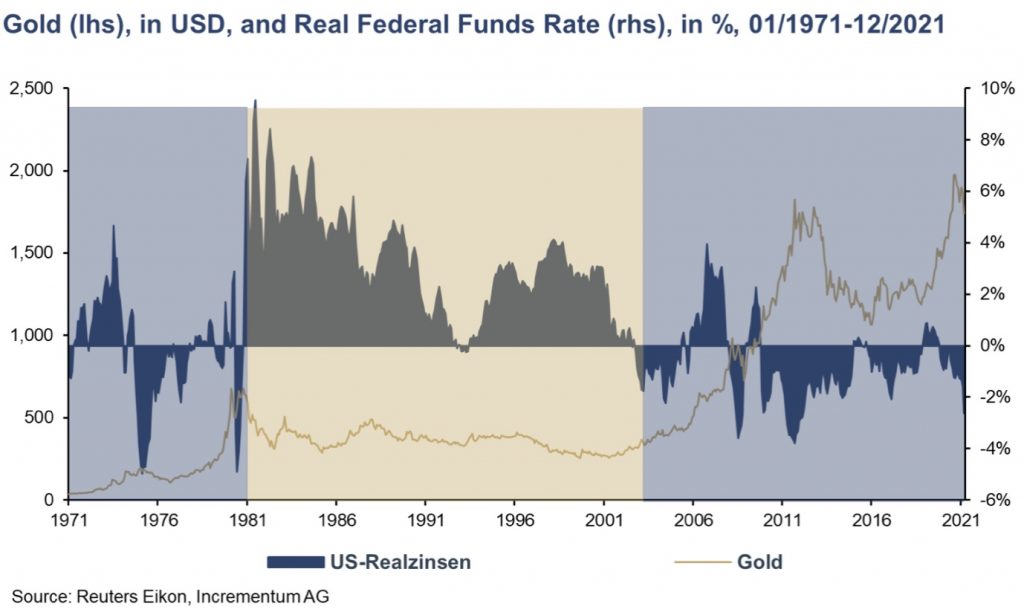 4. Inflation of 4 percent or more is a headwind for stock markets
Stock markets all over the world are heavily inflated, with excessive money supply growth and government support programs as the latest boosters. Only 2 percent of the time in history has the CAPE multiple (Cyclically Adjusted Price-to-earnings Ratio) been at today’s 40x level or higher, and breadth has been lagging, too, which is rarely an encouraging sign. When this bubble will start to burst, i.e. when the ever inflating stock market loses its artificially increased attraction, gold will be profiting.

As the following chart shows, the tailwind of inflation turns into a headwind when inflation rates exceed the 4% mark. 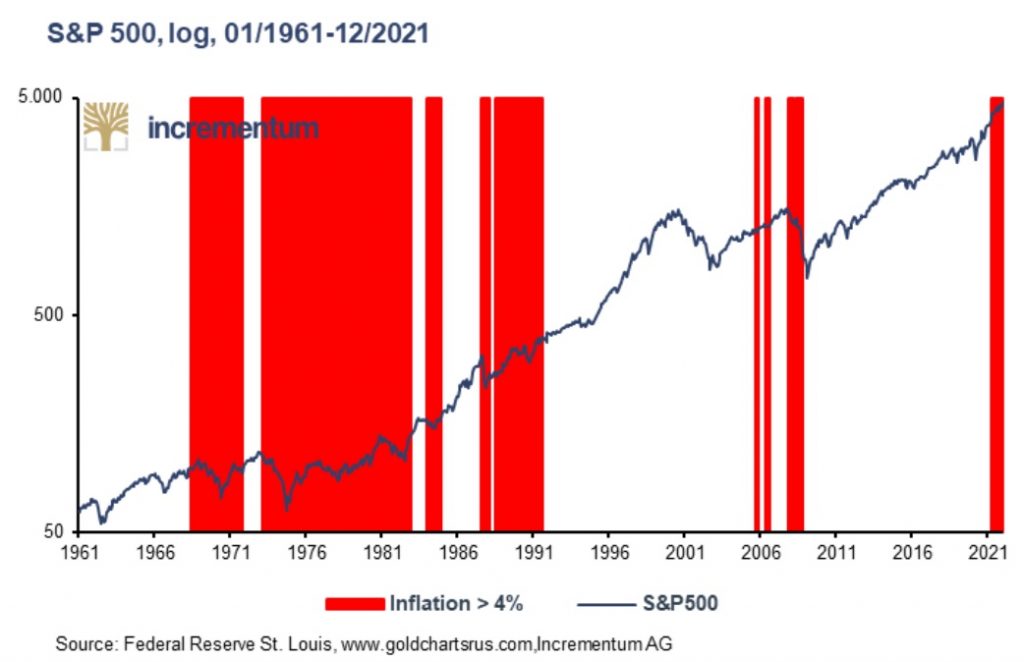 Let’s take a look at the performance of the S&P 500 in the key periods with inflation below 4 percent, which are the white areas. The performance in these six periods was as follows:

In the four high-inflation phases with inflation rates of 4 percent or more, on the other hand, the stock market’s performance was significantly worse.

5. Gold is cheap in relative terms
After two years of well-above-average gains of 18.9 percent and 24.6 percent, including the new all-time high in August 2020, gold had to take a deep breath. More so, as the huge 80 percent advance in gold from the August 2018 lows to the August 2020 top correctly signaled the 2021 surge in the CPI. And in 2020 gold did exactly what it should do in a diversified portfolio. Gold was an excellent hedge against the multilayered turmoil that hit the global economy because of the outbreak of the Covid-19 pandemic, as gold acted as a hedge against recession, stock market turbulence, rising inflation, and black swan events. Gold confirmed that it is the Virgil van Dijk of assets: always on hand when things get really hairy.

However, gold’s potential lies not only in hedging against unforeseeable events. There is also in a genuine investment case for gold, because compared to the all-time highs of 1980 and 2011, gold still appears cheap in relative terms: 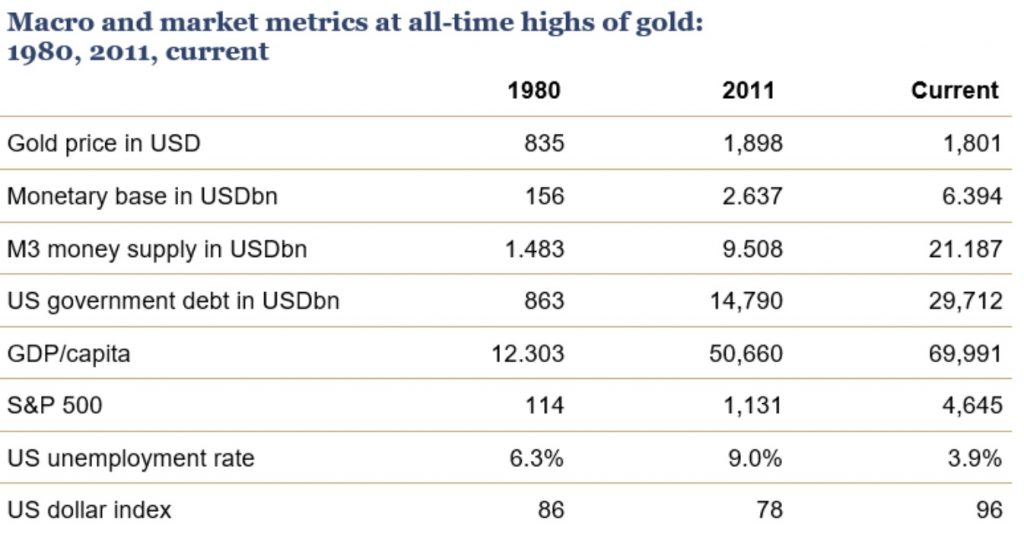 In light of these macro and market figures it is therefore difficult to imagine that we are currently at the end of a gold bull market.

Conclusion:
Two huge steps forward, one small step backward – that was gold’s rhythm over the last six years. If gold keeps this rhythm, 2022 and 2023 will indeed be golden years for gold. And this much is certain: The band is already playing.