Worst Recommendation Of 2019
December 29 (King World News) – Dr. Stephen Leeb:  “The worst recommendation I made in 2019, in what was otherwise an excellent year in the market for me (in both absolute and relative terms), was to buy Finnish telecom company Nokia. Shame on me. I should have known better…

Even after all the time I have spent studying the Chinese, their technologies, their forward thinking, and their propensity to always be prepared, I still thought that Nokia would benefit from the relentless pressure the U.S. was exerting on Huawei. I miscalculated.

Huawei, of course, is China’s leading tech company and the clear world leader in 5G, the technology that will define the critical mobile internet for at least the next generation. And despite all the pressure from the U.S., Huawei has hardly skipped a beat, while Nokia has missed at least several beats.

In other words, Nokia, one of Huawei’s only rivals, lost ground in a year in which you’d expect any random tech company you could pick would be a major winner. Meanwhile Huawei continued to grow as if the U.S., rather than blacklisting it, had given it the Good Housekeeping seal of approval. As a private company, Huawei doesn’t offer equity to the public. But as you can see from the chart, its bonds had a very good year – certainly much better than those of its 5G competitors. 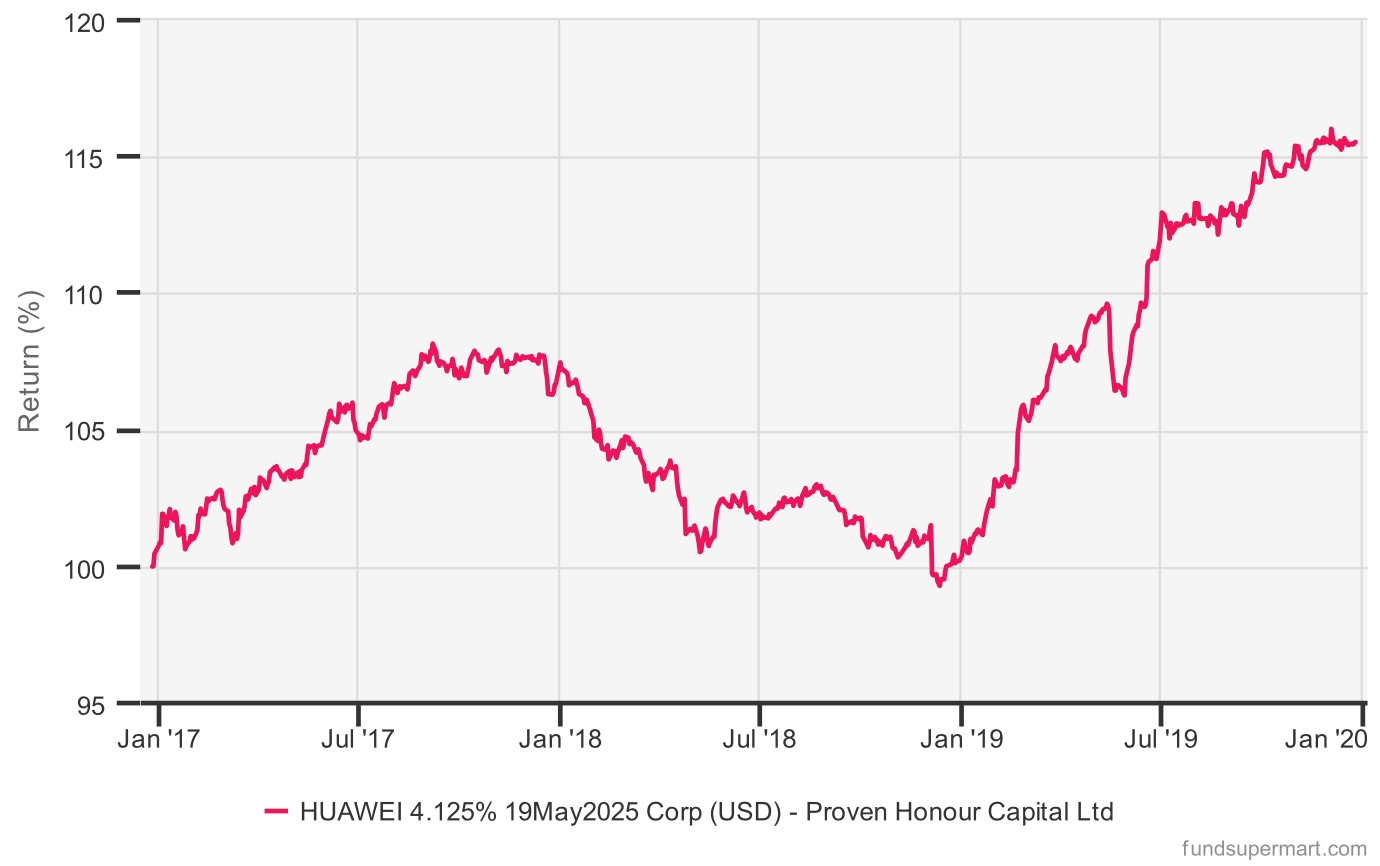 The 2018 dip in Huawei bond prices came from investors misjudging the trade war’s impact on the Chinese tech giant. Huawei’s resilience is one of many signs that things are going very well for the Middle Kingdom.

Gold Rising
Gold is rising like it means business. Though there will always be corrections, it’s important to realize that for the first time in a while, other commodities are joining the party. Why does that matter? It’s because the spectacular bull market in gold that I am confident lies ahead will be primed by resource scarcities. These could arise from various sources. Climate change, for instance, could force a massive push for the resources needed to put the world on a renewable growth track. An even more certain catalyst will be an accelerating push for growth in the developing world, which has coalesced around China.

As I’ve discussed before, the persistent excess of demand for resources over supply will be critical in forcing the world to accept a reserve currency other than the dollar. I continue to believe this will take the form of a basket of currencies backed by gold.

As I’ve also repeatedly pointed out, China’s goals and gold are wound tightly together. The chatter you constantly hear asserting that the U.S. has been beating China in the trade war – or alternatively and more pessimistically that we’re in a lose-lose situation – should be seen for what it really is: a sign that China has been winning, and winning big.

For an example of the former viewpoint, Jim Cramer, the well-known commentator recently said: “Given how many U.S. companies this quarter talked about mitigating Chinese risk by switching manufacturing to other countries, why not play it out? With these job numbers, hate him or like him, the long game now favors President Trump and the U.S. If we stop talking the Chinese will have to do more than just buy soybeans.”

Perhaps more typical are those who argue that both countries are losing, in different ways. China loses because companies are moving supply chains out of the country, while America’s losses come from high tariffs on vulnerable industries such as farming.

But when you look more closely, the arguments pointing to losses by China don’t pan out. Among the things to realize is that countries have been diversifying manufacturing for years – locating factories in other parts of Asia as Chinese labor costs have risen. The tariffs may have accelerated the trend, but China has compensated and then some.

Meanwhile, China’s trade with its Belt and Road Initiative (BRI) partners has been increasing at a double-digit rate. While final 2019 figures are not available, China’s six-month trade with BRI countries exceeded nine-month results from the U.S.

When you consider that just a few years ago the BRI was nothing more than a Chinese idea garnering almost no media notice in the U.S. (except, of course for my King World News interviews), you have to marvel. The U.S. is becoming ever less important to the Chinese, making China’s goal of independence from the U.S. ever closer to fruition. Give the trade war some credit for this.

More important, the trade war has done nothing to impact supply chains that are contained completely within China and that represent near-monopoly positions on goods critical to the rest of the world. I am, of course, thinking of rare earth elements (REE). But I’m also thinking of active pharmaceutical ingredients (APIs) as well as of the more complex supply chains that allow the manufacturing of electric vehicles (EVs). I have talked about REEs and EVs before and will come back to them in a future interview. I became aware of APIs only more recently. While most of the world’s drugs are produced in the United States, the ingredients needed to produce them, APIs, come from other countries. According to most estimates, between 80% and 90% of API production is based in China.

How important are APIs? Recently Rosemary Gibson of the prestigious Hastings Center was quoted in the Washington Post as saying: “If China shut the door on exports of medicines and their key ingredients and raw material, U.S. hospitals and military hospitals and clinics would cease to function within months, if not days.”

If our heads were any deeper in the sand, we would suffocate – and unless we wake up pronto, that could still happen. At least as significant as the trade wars in weakening our position in the world has been our ineptitude in the Middle East. The successful drone strike in September on the Saudi oil fields was likely the final straw. A New York Times article published just a few days ago,  on December 26th, reports that the Saudis have concluded “that a decades-old cornerstone of American policy in the Middle East – the understanding that the United States would defend the Saudi oil industry from foreign attacks – can no longer be taken for granted.” About the time that article was written, China, Iran, and Russia were carrying out military exercises in the Gulf of Oman – a gateway to Saudi Arabia and other parts of the Gulf…

Among the many developments and trends that point to a new monetary system, these recent events may turn out to be the biggest deal of all. The dollar’s continued position as a reserve currency stems almost entirely from a 1970s agreement that in return for U.S. protection, the Saudis would price oil in dollars. Oil then and now is the world’s most important commodity. So far, China has shown it has the ability to establish the pricing of a Mid-East benchmark for oil. While this benchmark is actively traded in Shanghai and some oil does exchange hands, most oil trading is determined by contracts that dictate the pricing of oil will take place in dollars. In other words, the buyers of Saudi oil have to pay dollars.

You don’t have to be a wizard to know that the predicate for those contracts is no longer applicable and that the pricing of oil in currencies other than the dollar is no longer something on the distant horizon. It’s coming rapidly coming into view.

The Basket Will Be Backed By Gold
Events that for a long time I’ve been arguing will happen are starting to seem nearly inexorable. While there will be bumps in the road, oil in the fairly near future will no longer be priced exclusively in dollars. That means the dollar’s grip on the world’s reserve currency will be loosened if not severed. Given China’s leading position in the fastest growing and largest part of the world, the Chinese will have a lot to say about what replaces the dollar. China’s former head of the PBOC, Zhou Xiaochuan, has previously indicated what that replacement will be: a basket of currencies in which the currencies are weighted by economic metrics (such as GDP in purchasing power parity). And the basket itself will be backed by gold.

Zhou wrote his paper exploring such a possibility in the wake of the 2008 meltdown, in which sharply rising commodity prices played a major role. It would not be surprising to see a sharp rise in commodity prices, including oil, within the next 12-18 months. Sudden and sharp gains in commodities could easily lead to a massive collapse in U.S. stocks, whose current historically high valuations are based on a belief that inflation will stay low indefinitely. If the world’s reserve currency at the time of the market collapse is still the dollar, we could easily see a replay of 2008 – or even worse. That in turn would create a horrible liquidity crisis that could lead to temporary selling pressure on gold, but at the same time ensure the rapid deployment of the new reserve currency.

$20,000 Gold
The limited amount of gold available in the world and the necessity for backing a big chunk of the world’s economic activity in gold implies a gold price many times higher than today. A figure of $20,000 or even higher wouldn’t surprise me. And that will just be the start: a growing world and rising commodities will ensure that after their initial surge, gold prices will continue to rise.

Just keep in mind that absent a commodity-catalyzed crisis, gold won’t surge overnight. And as it rises, there will be corrections. My advice is that when they occur, keep the big picture in mind and don’t sell. That’s particularly critical if you see gold dropping in the context of a 2008-type crisis, as actions taken in the wake of such an event could lead to a fantastically sharp advance in gold.

2020
READ THIS NEXT! 2020 As Fed’s Balance Sheet Continues Its Epic Rise CLICK HERE TO READ.