We are now witnessing historic and unprecedented action in the war in the the gold market.

Jason Goepfert at SentimenTrader:  “Gold stocks got his hard again on Friday. The most commonly-cited reason was fear of a looming rate hike, but that’s not necessarily a good reason given recent history… 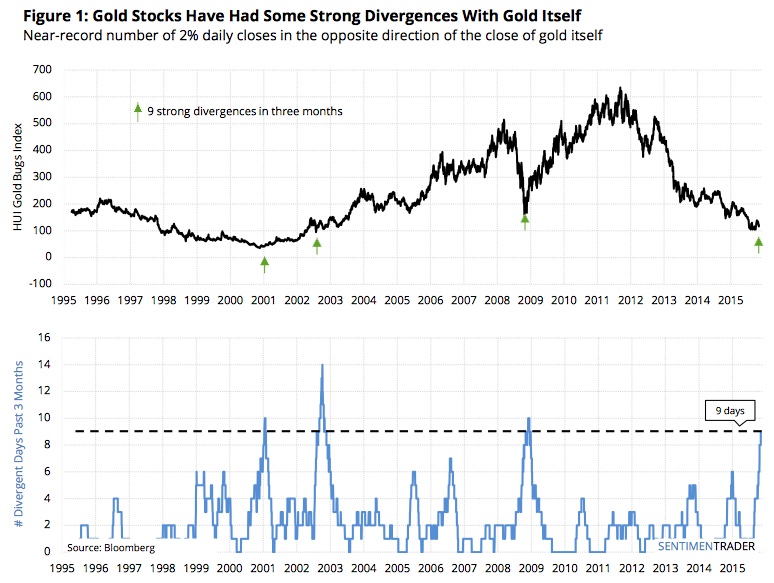 The biggest worry is that money managers are still too positive on gold’s prospects, unlike past lows when they were net short or nearly so (see chart below). 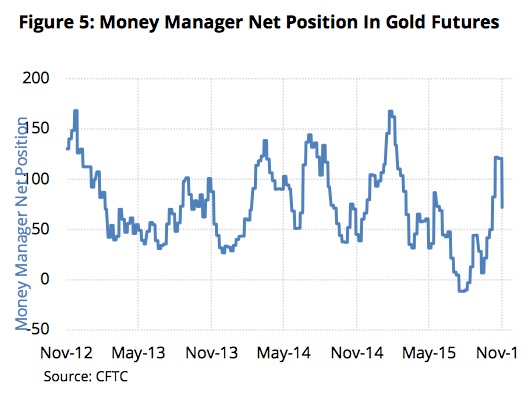 Seemingly due to threats of a looming hike in interest rates, gold got slammed again on Friday.

As noted in the past couple of reports, we were already seeing a historic level of focused selling pressure. Never before had gold been down this many days over a three-week period (see chart below). 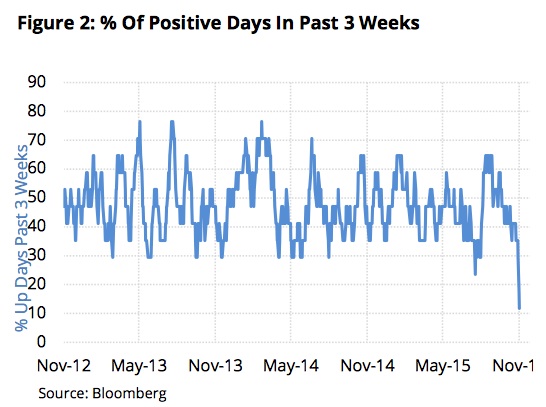 With Friday’s down day, this was the 8th straight loss, marking the 7th such streak since 1975. As we can see from Table 1, three months later gold was higher every time (see table below).

If the fear of a rate hike was the primary reason for the selling pressure, it may be short-term overdone. The Morgan Stanley estimate of months until the first rate hike just fell to 3.5 (see figure below). 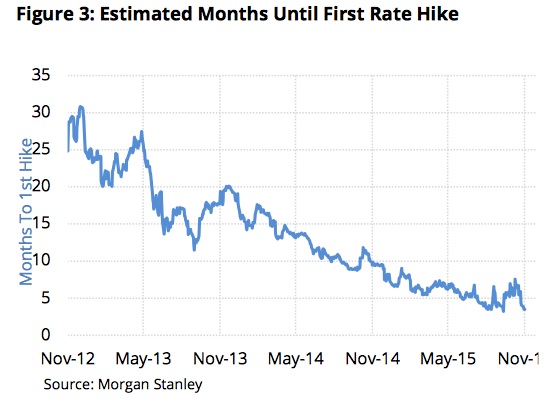 It fell to this low of a level twice so far this year, in early August and mid- September. Both coincided with lows in gold as it rallied over the next month.

The major input that traders use to trade gold stocks is the price of gold itself, of course. So the drop in gold has been devastating to these companies.

The 10-day rate of change in the HUI Gold Bugs index of gold stocks is now nearly -20%, one of its most extreme levels in the past three years (actually the past 20 years) (see chart below). 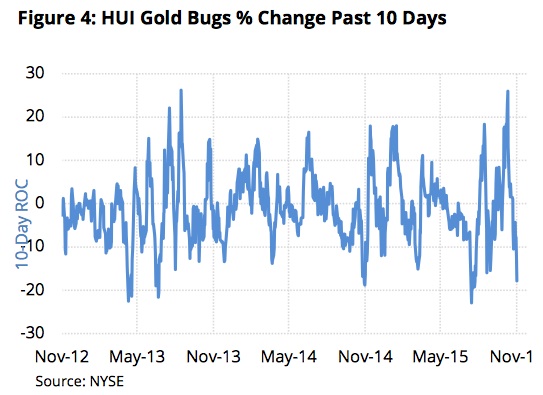 The biggest caveat here is that money managers are still long gold (Figure 5, chart 2 near top). They reduced positions quite a bit this week but remain near neutral levels at best. Previous lows in gold occurred when managers were nearly net short. This is a major negative and from our perspective the biggest reason not to overweight these stocks just yet, or at least know that there is a higher likelihood of short-term pain before the longer-term positives should take hold.” ***This commentary and charts are just a portion of one of the latest fantastic reports. To try a free 14-day trial of the internationally acclaimed work that Jason Goepfert produces at SentimenTrader simply CLICK HERE.

***KWN has now released the extraordinary audio with former U.S. Treasury official, Dr. Paul Craig Roberts, where he discusses the desperation of Western central planners, the global Ponzi scheme, how it will unravel and collapse, the rigging of the major markets, the corrupt media’s role and much more, and you can listen to it by CLICKING HERE OR ON THE IMAGE BELOW.

***KWN has also now released the powerful audio with one of the top economists in the world, Michael Pento, where he discusses what to expect in gold, silver, of the year, what surprises to expect as well as how investors can protect themselves, and much more, and you can listen to it by CLICKING HERE OR ON THE IMAGE BELOW.