On the heels of continued volatility in the 2016 trading year, today the man who has become legendary for his predictions on QE, historic moves in currencies, and major global events, laid out the jaw-dropping road to $10,000 gold and $500 silver.

Egon von Greyerz:  “Between 1999, when gold bottomed at $250, and the 2011 peak at $1,920, there was only one major correction lasting 8 months in 2008. The ensuing correction from the 2011 top at $1,920 of almost $900 seemed to take an eternity until it finally finished in December 2015. During those four years it was always clear to me that the uptrend in the precious metals was still intact, although I must admit that I did not expect a correction of that duration. But after a long life in markets, patience becomes a virtue that is absolutely essential…

Egon von Greyerz continues:  “If your investment decisions are based on sound principles at the outset, there is no reason to change your opinion because the market takes longer to accomplish what it must do. 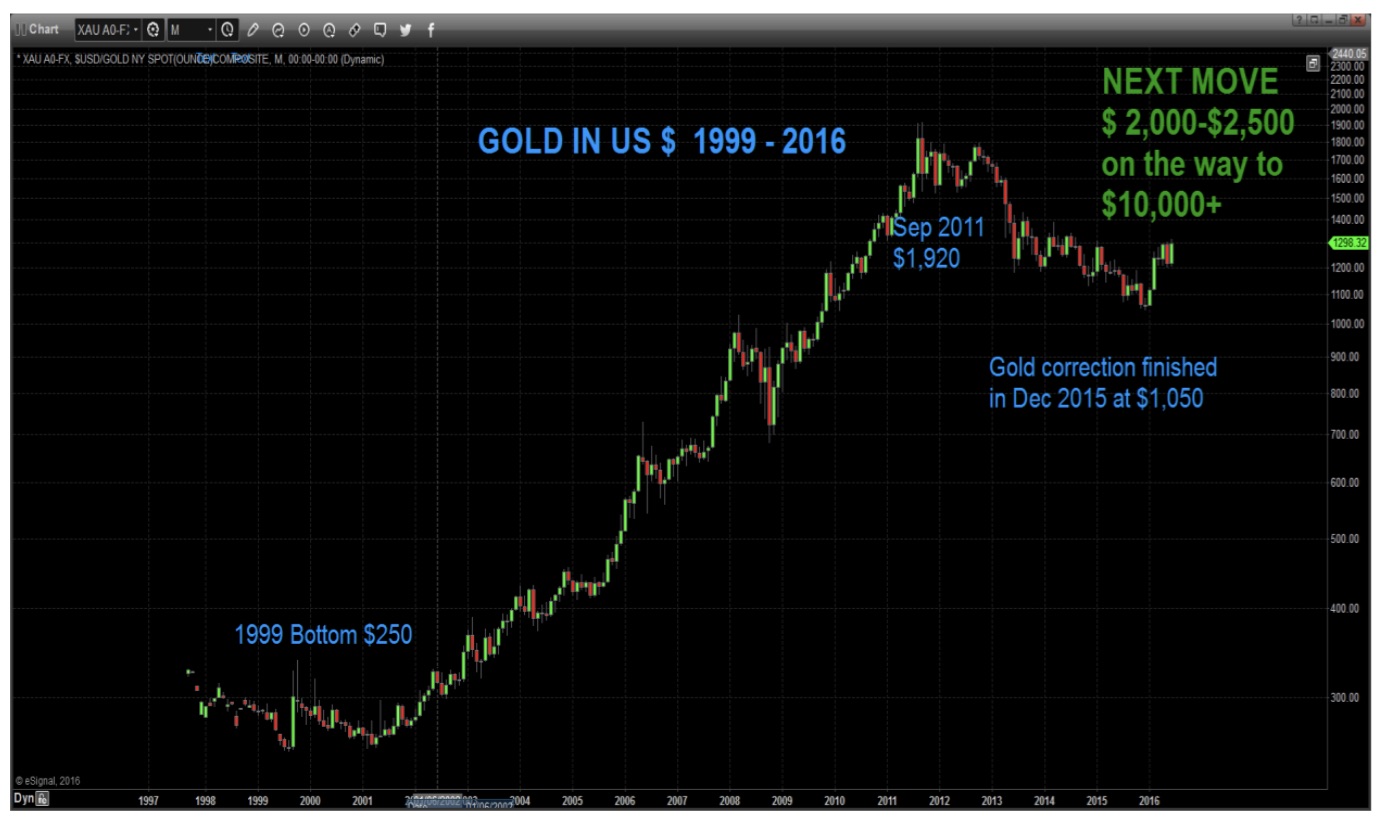 Buy when unloved and undervalued
We bought gold for our own account and for our clients back in 2002 at $300. At that time gold was unloved and undervalued. That is of course the best time to get into a long-term strategic investment. But it was never our intention to buy gold as an investment. No, we bought gold because we had evaluated economic and financial risk in the world economy and came to the conclusion that it was unlikely that the system would survive without major defaults, both sovereign and in the banking system. And as we know, the financial system almost went under in 2007-9. With $25 trillion of printed money, credit and guarantees, the system was given a temporary stay of execution. But this $25 trillion was just the initial package. Since 2006 global debt has increased by $90 trillion plus unfunded liabilities and derivatives of several hundred trillion dollars. This explosion of debt has confirmed the risks that we saw already back in 2002.

Financial system cannot survive
Now, in June of 2016, I am absolutely certain that the financial system cannot survive intact. Global debt has gone from $20 trillion to $230 trillion, a more than 10 times increase in the last 25 years, and none of this debt can be repaid with real money. Governments and central banks have totally run out of ammunition. In their desperate attempts to save the financial system, they have manipulated every single market and financial instrument. They print money, they set false interest rates (now negative), they buy their own debt, they support stock markets and they also sell gold in the paper market. All of this action or deceitful manipulation is just creating bigger bubbles that will eventually lead to a total implosion of the financial system and all the bubble assets such as stocks, bonds and property.

The problem is that no one is prepared for the coming shock. The world believes that the Shangri-La state that central bankers, led by the Fed, have created in the last 100 years will last forever. A privileged few have accumulated unreal wealth. Most normal people in the West believe that they are better off, not realizing that their higher standard of living is based on government debt and deficit spending as well as a massive increase in personal debt.

Massive money printing coming
But before the financial system implodes, there will be the most massive money printing program that the world has ever seen. They will need to print money in a final and futile attempt to save the bankrupt banks. With $1.5 quadrillion in derivatives outstanding, the printing presses (or the computers) will run hot. With Deutsche Bank’s derivatives at $75 trillion and JP Morgan at almost $100 trillion, only those two banks need support at 2.5 times global GDP. It is of course not just the financial system that will need support. Governments will run out of any significant tax revenue and will need to print money for all their expenditures. Soon there will be virtually no social security and no pensions. Remember that Japan already prints 50% of its annual expenditures.

All of this printing will result in global hyperinflation of at least similar proportions to the Weimar republic or Zimbabwe with the dollar, euro, yen and pound all reaching their intrinsic value of ZERO.

Can I be wrong in my outlook with first hyperinflation and then a deflationary implosion? Well, I sincerely hope that I will be wrong because this outcome would be devastating for the world. But maybe it is necessary for the debt to implode so that the world can start afresh again based on sound economic principles and with no or little debt.

So even if the outcome will not be as dire as I fear, we know that the risks are of a magnitude that has never existed in history before. And this is why the few privileged people who have capital or savings to would be wise to prepare for these risks.

Wealth Preservation And The Roadmap To $10,000 Gold & $500 Silver
Throughout history, gold (and sometimes silver) has been the only money that has survived. Every paper or fiat currency has always been destroyed by governments through deficit spending and money printing. In the last 100 years all major currencies have declined 97-99% against gold. It is virtually guaranteed that they will go down the final 1-3% to zero. But it must be remembered that this decline means a 100% fall form here. This final decline of the currencies will be reflected in the gold and silver prices. I am still convinced that we will see gold at $10,000 and silver at $500, possibly in the next 5 years, and that those levels will be reached even with normal inflation. But if we get hyperinflation, we could add quite a few zeros to the price.

So from a wealth protection or insurance point of view, it is absolutely essential to own gold and some silver. And although I said that precious metals are primarily for a privileged few, this is actually not the case. In India, virtually everyone owns gold and many of the Chinese save in gold. Any ordinary person can buy 1 gram gold or more a month. One gram is $40, which a great money people in the world could afford to save monthly.

There is of course only one way to own gold and silver from a wealth preservation point of view. Gold must not be held in a bank or in paper form like an ETF. No, gold must be held in physical form and stored outside the banking system. Small amounts can be hidden or put in a personal safe but bigger amounts must be kept in highly secure private vaults outside of the banking system and in a politically safe jurisdiction like Switzerland and Singapore. 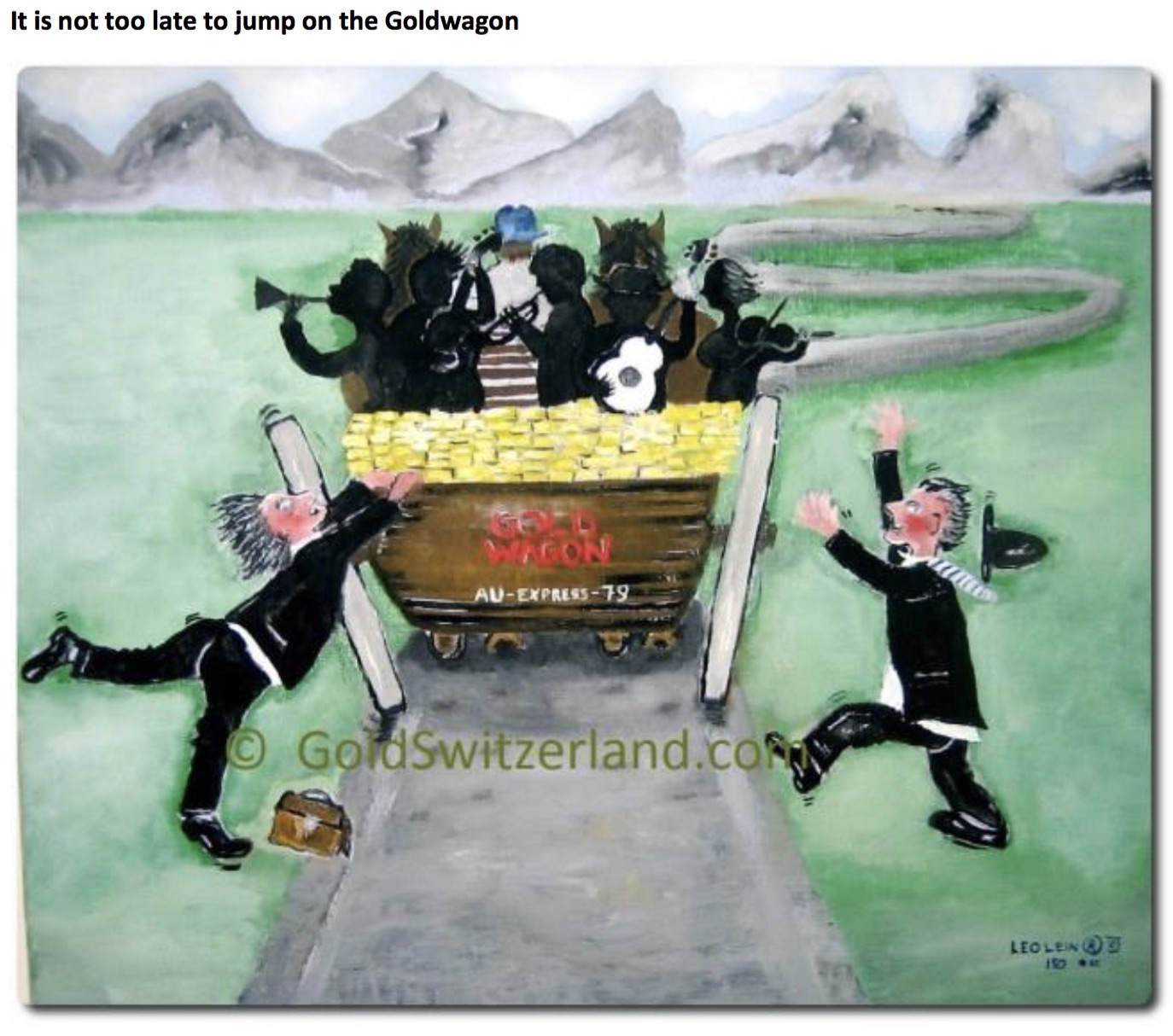 Gold at $1,300 and silver at $17 is a bargain. But the metals will not stay at these low levels for very long. With the correction finished and the next uptrend in place, we could soon see the metals accelerate very fast. The problem is that there is very little physical gold available in the world and we have reached peak gold from a production point of view. Once demand increases, it can only be satisfied by much higher prices. So now is the time to jump on the Goldwagon. ***KWN has just released an extraordinary audio interview with Egon von Greyerz discussing new information about the endgame, the gold and silver markets, and much more, and you can listen to it by CLICKING HERE OR ON THE IMAGE BELOW.