Today a famed short seller discussed The Big Short, gold and why global stock markets are headed for trouble.

By Bill Fleckenstein President Of Fleckenstein Capital
April 12 (King World News) – Overnight markets were largely inconsequential, as demonstrated by the fact that the SPOOs were slightly higher overnight, then the market tried to rally in the early going, even as we received a couple of negative interesting earnings season data points…

Bill Fleckenstein continues:  Before getting into that I would like to point out that I have noticed a certain battle cry amongst stock bulls that they believe whatever weak economic news and financial results that might be seen during earnings season has already been discounted. Therefore, no matter what companies say, stocks will go up. I think that is a dangerous thesis. My hunch has been that the surprise could be that bad news — or a lack of good news — sees stocks start to decline, which could really feed on itself.

The Worst Is Behind Us, But It’s Closing Fast
Remember that we have already seen macroeconomic data that is quite weak, even with the unusually warm winter we had this year versus last year. Thus, my (contrary) thought is that stocks will slide through earnings season, though I haven’t done much about this from a positioning standpoint because I would first like to see that thought begin to play out.

I bring all this up because I’m sure people were surprised to see Alcoa lose about 4% on its results, and probably even more so when Juniper declined 10%, though the latter did lose at the game of beat-the-number pretty much across the board. Granted, we can’t draw too big a conclusion from just two companies, but I at least wanted to lay out what I think has a decent chance of happening, and the results from those two could be the beginning.

Not today, however, as the afternoon saw a modest buying frenzy (I have no idea why) that saw the indices add 1%. Away from stocks, green paper was a bit stronger today, fixed income was lower, oil gained 4%, and the metals were mixed, with silver rallying 1.5% to gold’s itty bitty loss. 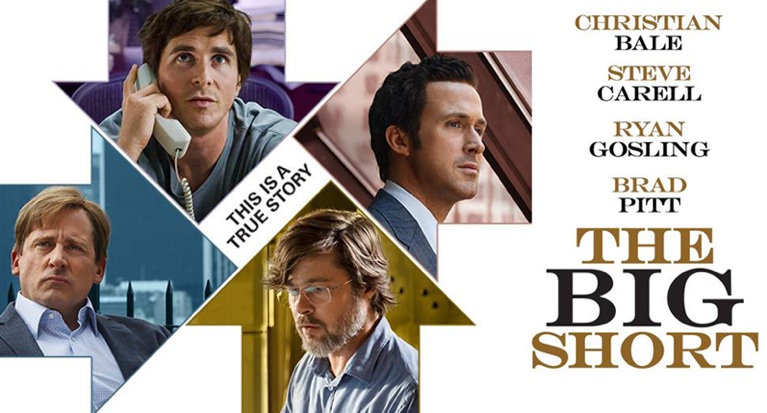 “It Ain’t What You Don’t Know That Gets You Into Trouble…”
For what it’s worth, I finally watched The Big Short. Many people had recommended it to me as a terrific movie (most recently Fred Hickey), but I had a bias against it because in the early excerpts that I read, I took some exception to Michael Lewis basically saying that his main characters were the only ones who saw the housing bubble. In addition, I especially didn’t like the fact that the Fed was left completely out of the blame game when they had more to do with the ensuing crisis than anyone else, by a mile. Recall that Greenspan was one of the leading proponents for abolishing Glass-Steagall, part of which allowed the so-called investments banks (i.e., brokerage firms) to pile on enormous amounts of leverage to buy the toxic paper that they created (yes, it’s hard to believe, but they were that stupid).

But that is almost a minor consideration considering the Fed was directly responsible for precipitating the housing bubble through irresponsible monetary policies, as well as cheering it on. In addition, the Fed was supposed to be regulating these entities. As for the idea that only the main characters saw what was happening, that just isn’t true. Yours truly wrote a book published in the beginning of 2008 in which the housing bubble featured prominently, and for any new readers who would like to know just how obvious all that was as it was unfolding, I encourage you to look through the Rap and Ask Fleck archives starting in early 2007 (see Feb. 23, 2007, just to pick one of many).

“…It’s What You Know For Sure That Just Ain’t So”
Having said all that, it is a terrific movie and the points that it does make are really well made. I just wish that they could have pointed more of the spotlight at the real culprit, the Fed, because eventually these central banks have to be brought under control so we can finally get around to solving our problems for real.

Question: Fleck – not to question u – but what is the dollar going to trade down against? and this is not a bearish gold call bc you know I’m saying sit back and enjoy the ride. I think its great that I expect both gold and the dollar to rally together and that makes mining companies that much more attractive as their costs will be going down as the price of gold moves thru its old hi of 1900. However I just do not see why the dollar is going to get smoked – it trades mostly vs the euro and things over there aren’t very good.

Answer from Fleck:  “It’s just green paper. It’s like a concept stock with just a story. You ask that question because it went up aggressively for a year and a half or so. It has just declined against almost all the G-7 currencies. I never said it would get smoked, but the entire thesis for its rally was the Fed, the SPOOS, and the supposed recovery.”

Question: I know you don’t own ETFs so this is hypothetical. At this point, if you had a good share of both miners and gold/silver ETFs in your portfolio, would you consider moving the money you had in ETF to the miners? The miners are doing much better than the ETF so far this year and between the two my investments are about equally divided. I’m just looking for some risk/reward perspective. Thanks for your great service.

Answer from Fleck:  “I own specific companies for what I think are good reasons, and I don’t own ETFs because they are loaded with companies I don’t want. So I think switching makes sense, as long as you know what you are doing.”

Now you have a situation where central banks have largely “restored” the sold volume trade. This time, however, there is no liquidity compared to 2008……this is why the risk today is in mutual funds and not Wall Street. Added to that is the wave of debt refinancing that gathers steam starting from this year. Fed cavalry won’t have the same impact next time down.

Answer from Fleck:  “Thanks to a very smart reader, who runs a fixed income fund, for sharing that bit of data.”

SILVER EXPLOSION: The Price Of Silver Is Setting Up To Explode Even Higher