A remarkable silver prediction unfolded recently and the man who predicted it just issued a major update on the silver and gold markets. 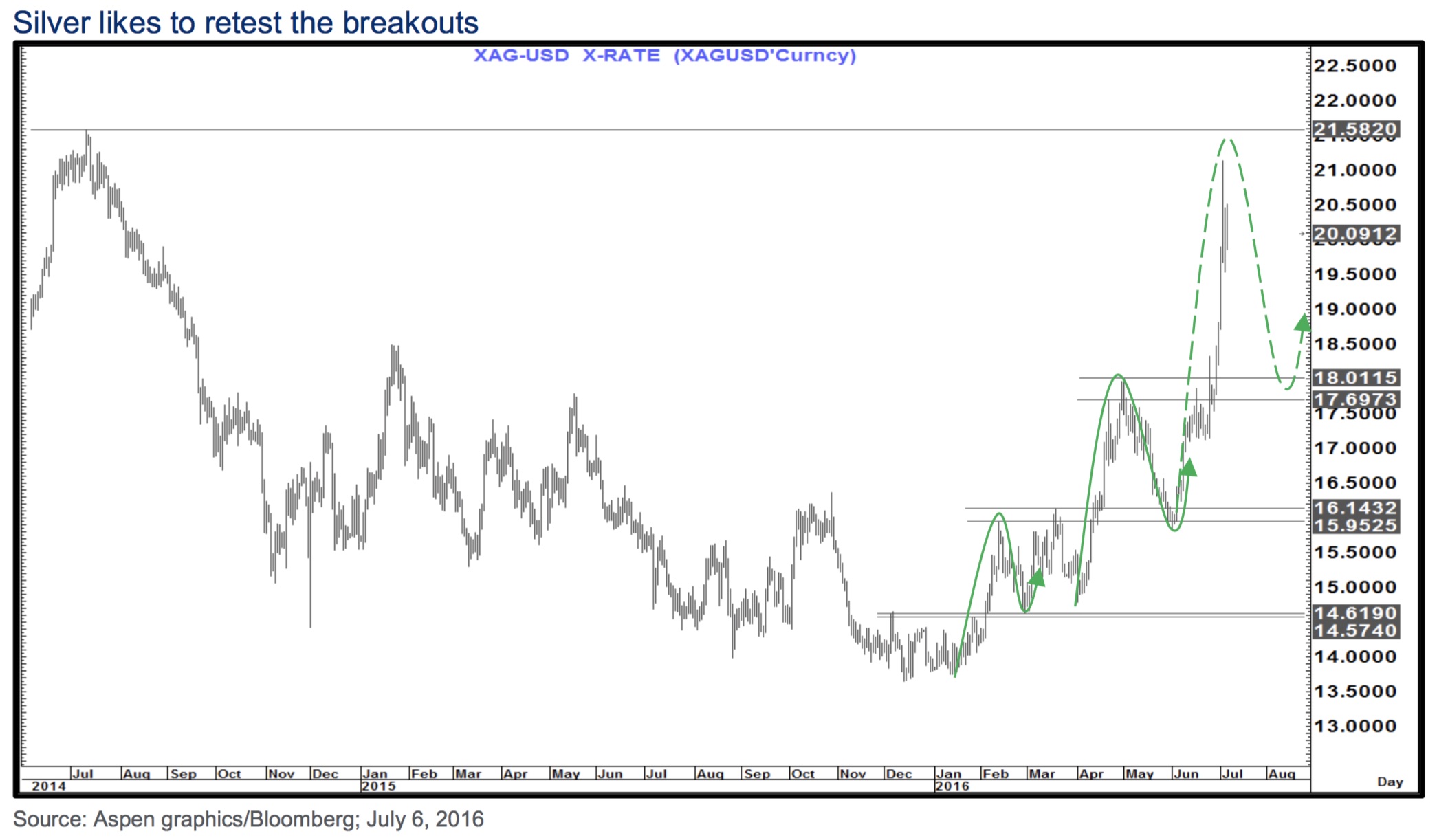 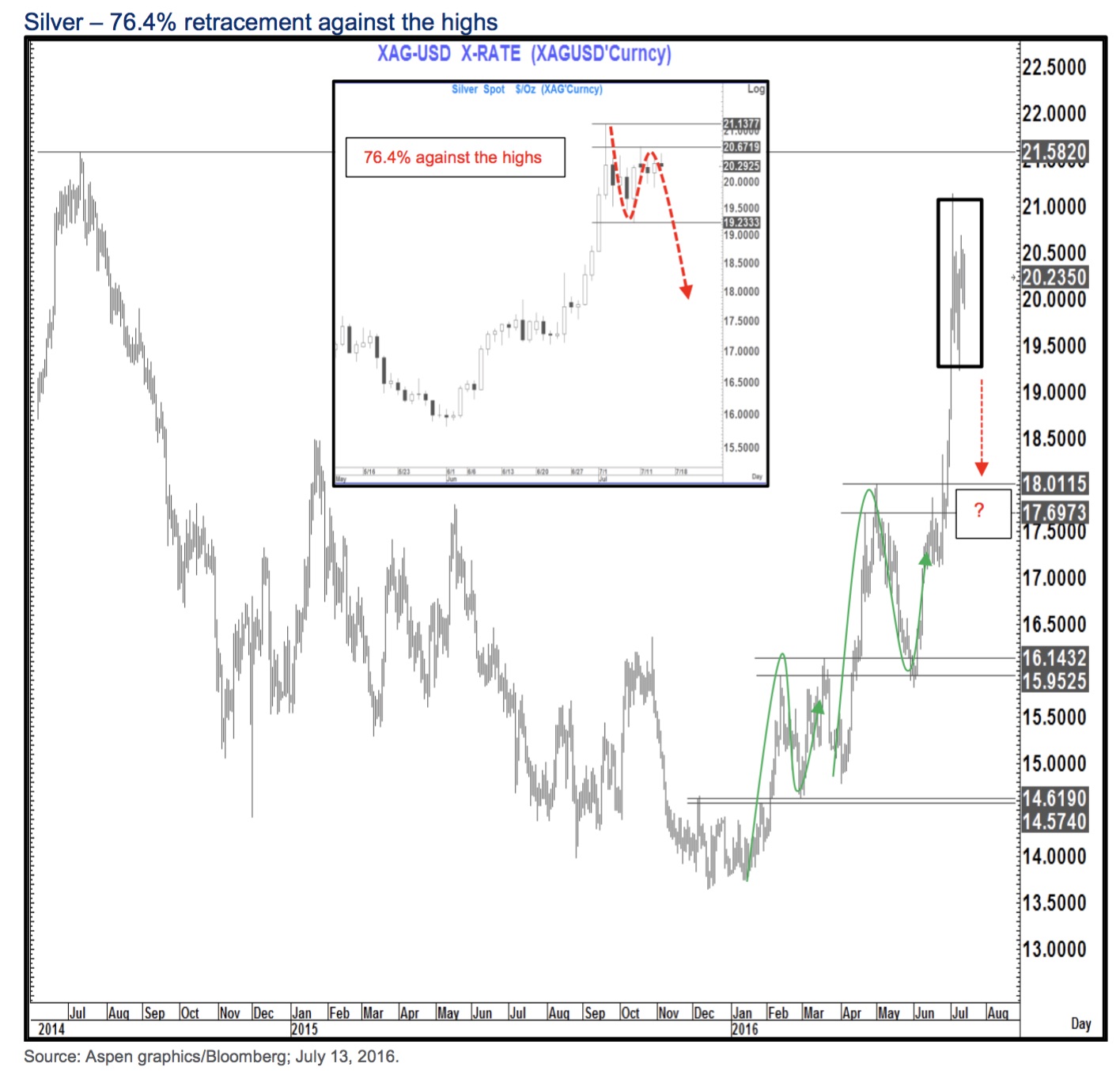 Fitzpatrick Extremely Bullish On Silver!
Top Citi analyst, Tom Fitzpatrick:  “The Gold/Silver ratio is beginning to turn lower from good resistance, suggesting that the downtrend which began earlier this year is resuming. Initial support is around 65, though (big picture) significantly lower levels may be seen (see chart below). 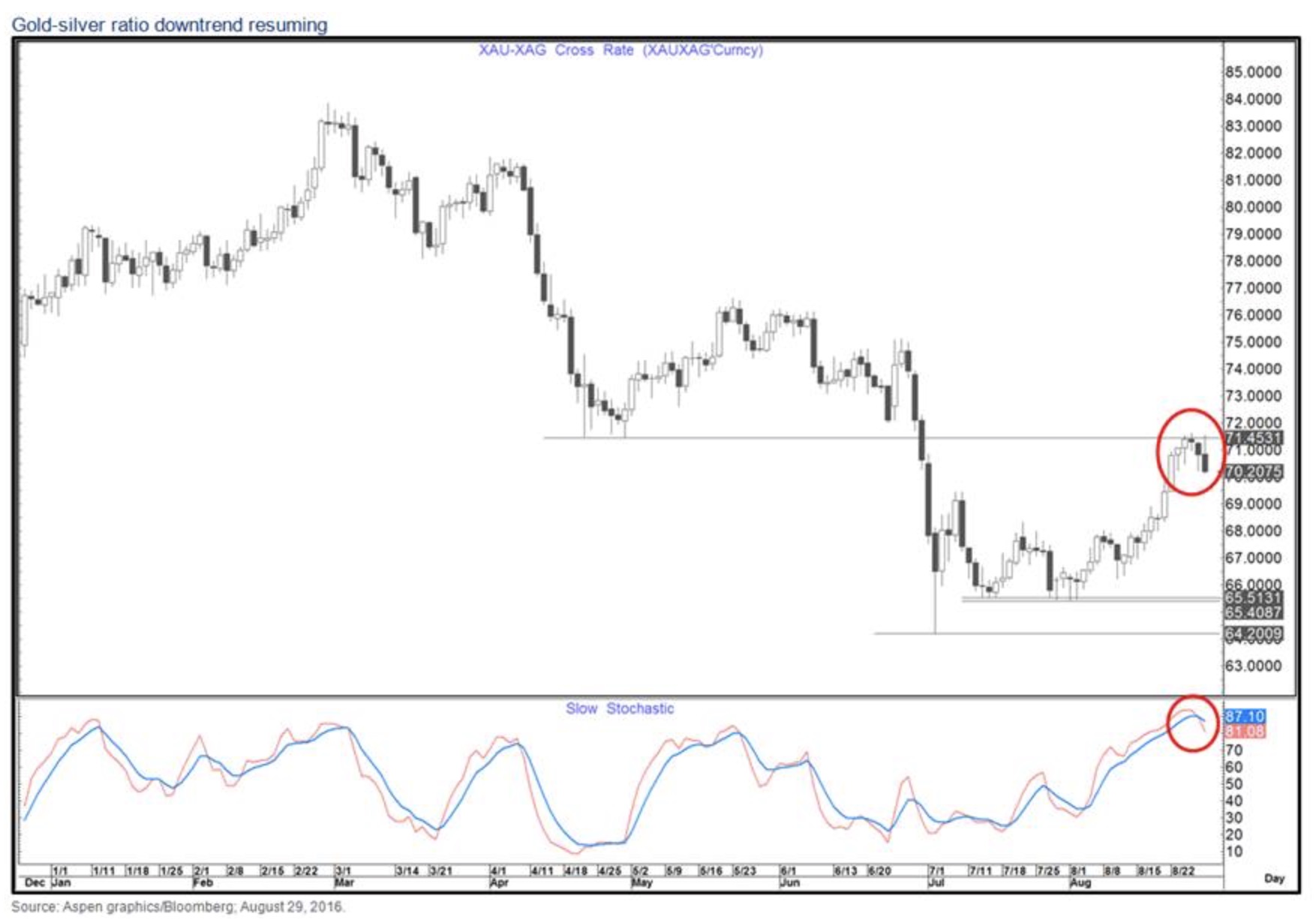 Silver is showing some signs of life, though we would like to see a break above $19.22 to suggest the uptrend is resuming. After posting a multi-year high at the end of February, the Gold – Silver ratio has been in a clear downtrend making lower highs and lower lows. The most recent rally took the ratio up to the prior low which has held as good resistance…

King World News note: I want to simplify this for KWN readers around the world.  As Fitzpatrick continues to discuss silver strengthening vs gold and the Gold/Silver ratio declining, people need to understand that this is extremely bullish for the precious metals and it is exactly what you expect to see in secular bull market moves.

Tom Fitzpatrick continues:  It now appears that the ratio is turning lower off that level as an evening star like pattern was posted in the prior days and a bearish outside day was confirmed on Monday. In addition to this, daily momentum has crossed down from the most stretched level seen since 2012. This all suggests to us lower levels are likely from here. 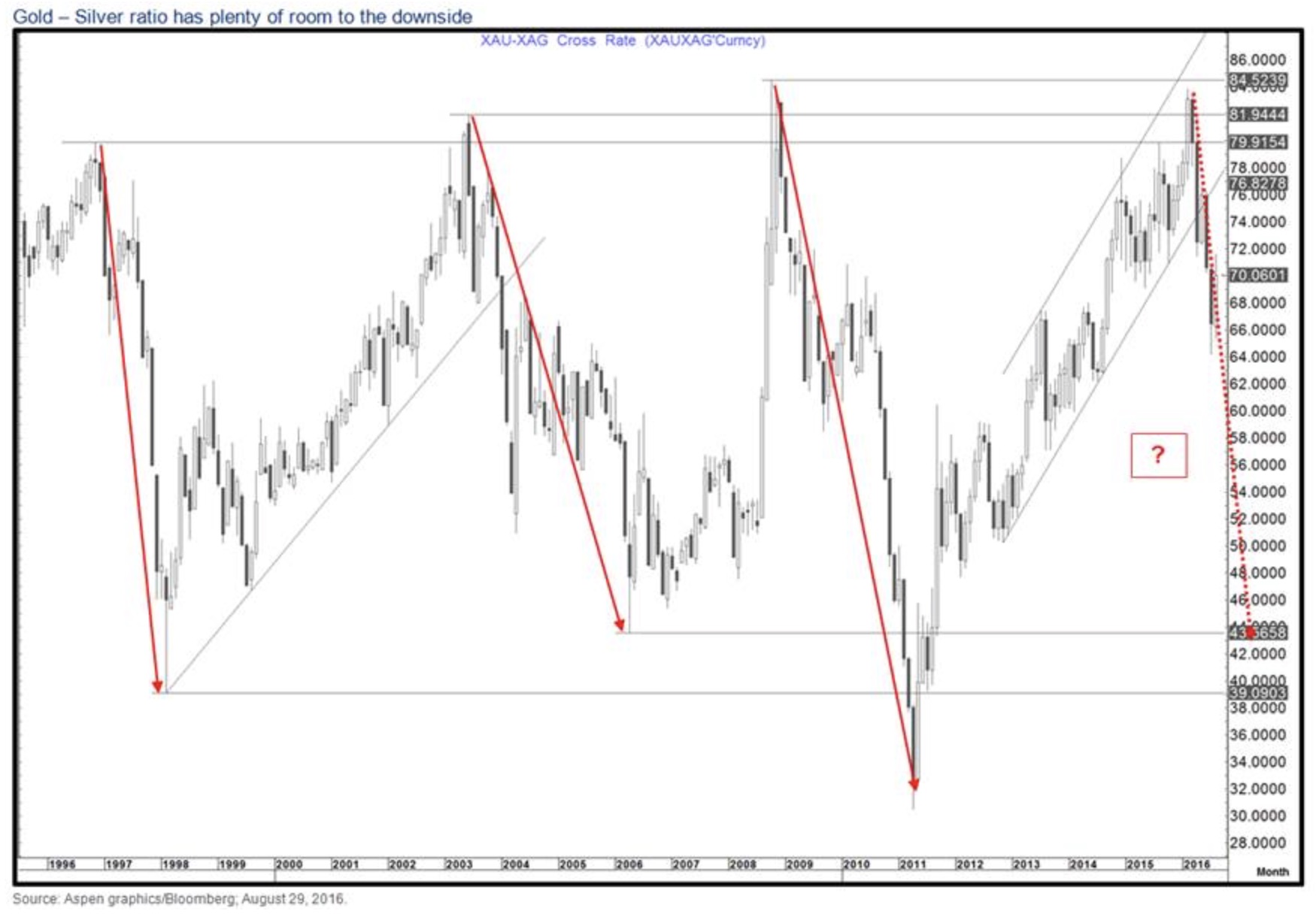 Over the last 20 years the Gold/Silver ratio has begun major declines from the 80 – 85 area, the same area where we appear to have topped out once again.

Once the trend of lower highs and lower lows has begun over that period, the downtrend has gone on to sub-45. A repeat of this dynamic would suggest Gold is likely to outperform Silver in the coming months and potentially longer. 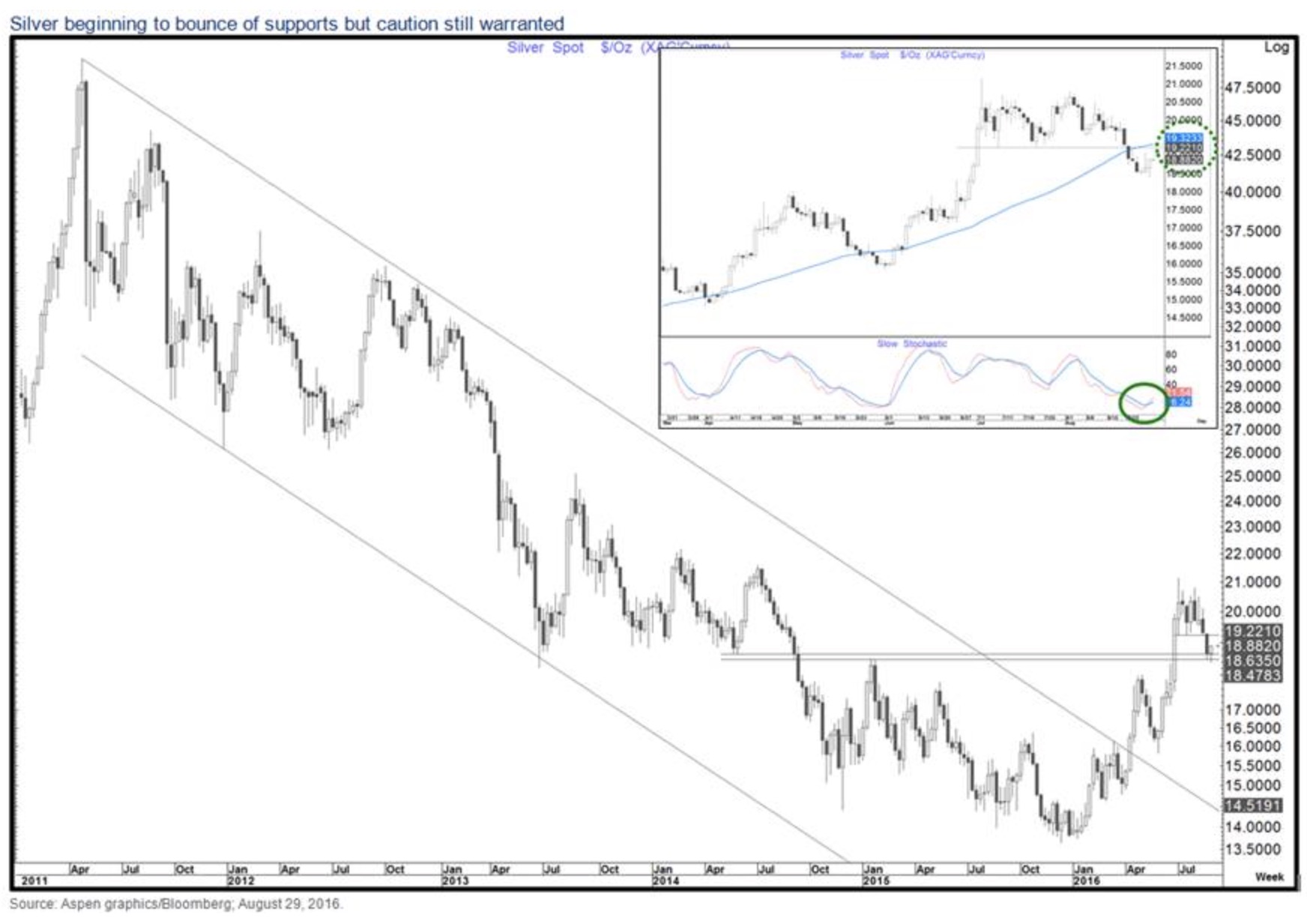 Silver has held at support around $18.48 – $18.64, an area which had been pivotal in 2014 and 2015. Daily momentum is beginning to cross higher from stretched levels. However, Silver needs to get back above $19.22 before higher levels can be expected. This was the breakdown area from last week.

What About Gold?
Gold on the other hand has not seen any bounce and continues to trade near the range lows. A break below $1,310 confirms a double top which would than target $1,254, in line with the June 24 low at $1,250. 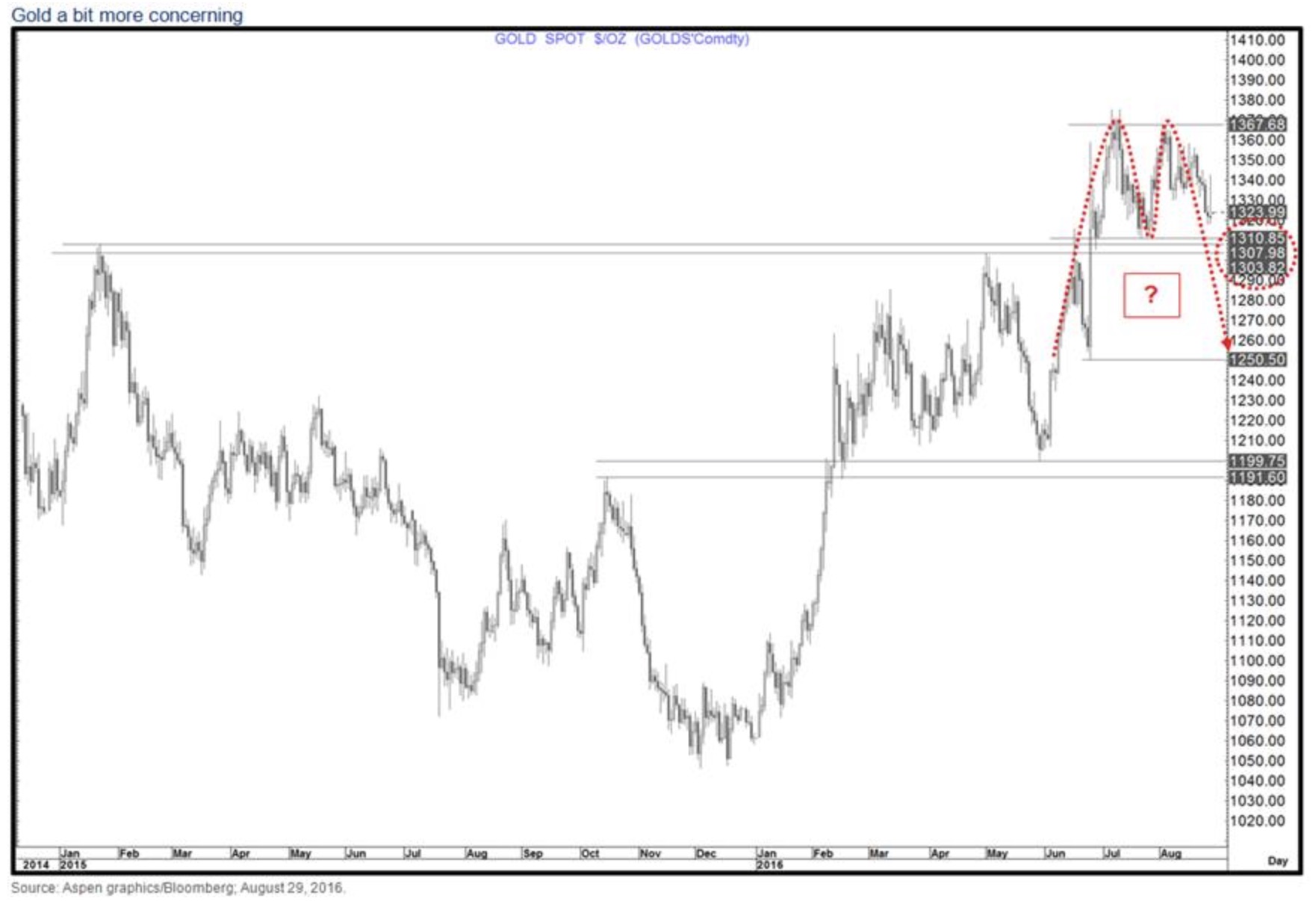 This would be reinforced by a break through horizontal supports immediately below the neckline around $1,303 – $1,307.

Bottom Line For Gold & Silver:
The Gold/Silver ratio downtrend appears to be resuming from here, suggesting Silver is likely to outperform Gold over the medium term. While this does not give us a directional clue for the precious metals, Silver is looking more resilient than Gold as it bounces off supports. Meanwhile Gold remains at the range lows and a break below $1,303 – $1,310 would be bearish.”

King World News note:  Fitzpatrick is bullish on both gold and silver medium- to long-term, and it’s important to understand that as the Gold/Silver ratio began to trend in favor of silver, this was yet another indication that the bull markets in gold and silver were well underway.  For KWN readers around the world who are looking to accumulate physical gold or silver, remember to use the pullbacks to accumulate precious metals, rather than chasing price.  Having said that, it is also important to remember that in bull markets almost all of the surprises take place on the upside — think Brexit and how it propelled gold and silver prices higher.

Celente – Fed Cuts But Monetary Insanity Keeps Gold Above $1,400 Near Breakout That Will Send Gold To $2,000