"The Physical Markets Are On Fire"

But first, a quick note sent to KWN from Hong Kong hedge fund manager, Willam Kaye: "Back in the real world of markets spot gold is backwardated v. the benchmark Comex contract by over $1.10, silver by $.07 (4.5%). So if you trust the system not to default in the very near future you can sell physical silver today and use a small portion of the proceeds to buy the benchmark paper contract for a ‘riskless’ 40% annualized return in a ZIRP world.

Bottom line, PMs are manipulated grossly and the physical markets are on fire. Gresham’s Law in play, real money-PMs-is disappearing, while CBs continue to pump…but if people want to play the technicals and add to the already record managed money shorts at these levels, be my guest. I have 2.3 metric tons of gold and will happily await the (Great) Reset."

“History shows that once an enormous debt has been incurred by a nation, there are only two ways to solve it: one is simply to declare bankruptcy – repudiate the debt. The other is to inflate the currency and thus to destroy the wealth of the ordinary citizen.”

As a market-chosen medium of exchange, gold is the antithesis to paper money. Debts are claims on future paper money payments. A brief glance at the overall debt situation already reveals that the foundations of the global economy haven't become more sound, but rather more fragile in recent years. 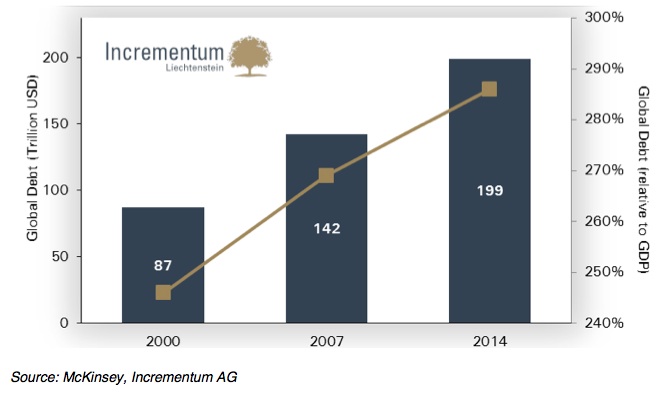 What is in our opinion quite remarkable is the current divergence between the actual gold price performance and the largely negative perception of many market participants. The reason for this is probably that attention is primarily paid to the gold price in USD terms. While gold moved sideways in dollar terms last year, the bull market resumed or continued in nearly every other currency.

The following chart shows the global gold price. This chart expresses the gold price not in US dollars, but in the trade-weighted external exchange value of the dollar. It appears as though the correction has ended and the gold price has entered a new uptrend in the autumn of 2014.

Global gold price back in an uptrend since autumn 2014 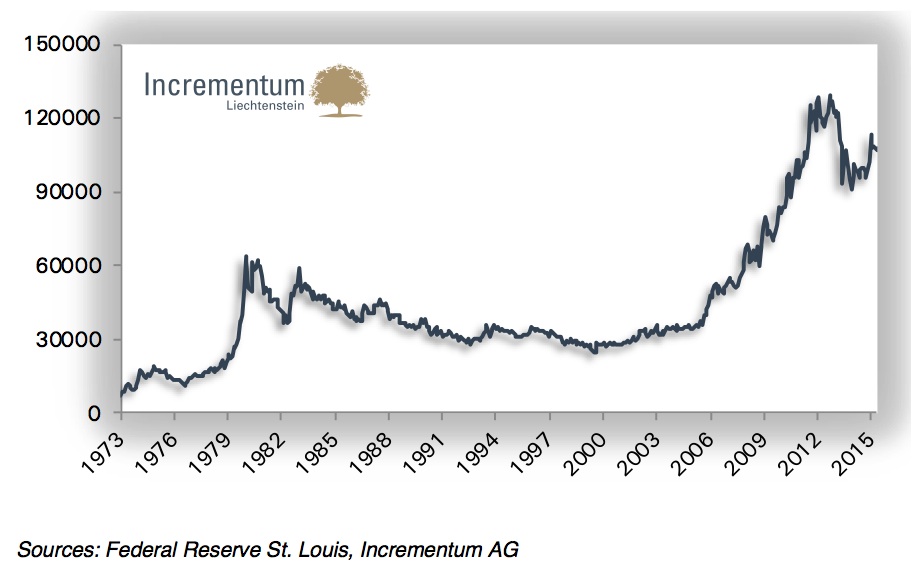 The prevailing divergence between perception and actual price performance can also be discerned in the table below. Last year, gold exhibited a negative performance solely in dollar terms. With a decline of 1.5% the loss was however quite moderate in the face of a historic dollar rally. One can also see that in euro terms a gain of 12.10% and in yen terms a gain of 12.30% was achieved. On average, the performance in the currencies under consideration here amounted to a solid 6.16%. Since the beginning of the year 2015, gold has done very well, too.

The global race to debase currencies is progressing to the next round. It appears as though Japan has handed the baton to Europe now. The weak euro is likely to enter the history books as a Greek gift1. We are convinced that gold will emerge as the victor in this ongoing devaluation competition.

1 A Greek gift designates a gift that turns out to be detrimental or even fatal to the recipient. The term is taken from Greek mythology, and refers to the gift the Greeks made to the Trojans – the famous wooden horse that helped the Greeks to conquer Troy. The Latin saying “Timeo Danaos, et dona ferentes” is also connected with this (“I fear the Greeks, even though they bring gifts”). Euroland has problems with both proverbial and literal Greek gifts these days.