On the heels of wild start to the 2016 trading year, today the man who has become legendary for his predictions on QE, historic moves in currencies, and major global events, just warned that the price of silver may be headed to the stratospheric price of $660 as the world financial system melts down.

Egon von Greyerz:  “The Fed last Wednesday did what I had already forecast back in December and did not increase rates. They know that the real economic situation in the US and in the world is a lot worse than all the manipulated figures and propaganda. Therefore, we are now getting closer to Minsky Moment for the world economy…

Egon von Greyerz continues:  This is a sudden and for most people totally unexpected collapse of asset values together with an implosion of the debt that financed the asset bubbles. We have discussed many times, Eric, that the world’s major central banks are extremely frightened of a deflationary collapse since this will lead to a total failure of the financial system.

On The Road To Ruin
Consequently, they will launch the final and the most massive money printing spectacular that will dwarf anything the world has seen before. This will create a colossal global hyperinflation which will be the end of the current monetary system and eventually result in a deflationary collapse.

Since the early 1990’s, when Greenspan started the last phase of the disastrous credit expansion in the US, world debt has gone from $24 trillion to $235 trillion today. During the same period, global GDP has gone from $40 trillion to $80 trillion. In order to double GDP between 1992 and 2015, the debt needed to increase 10-fold. So we have seen an average of 3% growth in global GDP during the last 23 years and an 11% annual growth in debt. When debt grows exponentially to produce a mediocre increase in GDP, we know that the world is on the road to ruin.

In the next few years, global debt will most likely go up not just by $200 trillion but probably by several times that, at least until enough has been printed to cover outstanding debt, derivatives of $1.5 quadrillion and all unfunded pension and medical liabilities. Eric, I would not be surprised if the world printed a few quadrillion dollars, euros, yen etc in the next five years or so.

An asset implosion is totally guaranteed in my view and that will also lead to a wealth destruction of a magnitude that very few people can imagine today. I would not be surprised to see assets like stocks and property go down by 75-95% in real terms. And most bonds will go down by 100% since the borrowers, whether they are public or private, will default on virtually all debt.

Gold & Silver Now Ascending
And that brings us to gold, Eric. Gold and silver are now reaching their period of glory. Precious metals will be one of the very few ways to insure yourself against total wealth destruction.

There are some very interesting developments going on in the metals currently. Firstly, it is clear that the correction which has lasted since 2011 is now over. We are now on our way to new highs in gold and silver and eventually much, much higher.

So silver is clearly a very exciting investment at this time. But investors must remember that silver is extremely volatile and not for widows and orphans. The safe and more stable metal is gold.

But I must stress that I don’t think we will have today’s money in the next few years, instead it will be hyperinflationary money. This means that we might have to add quite a few zeros to the gold and silver prices. But these zeros will be very meaningful for anyone who doesn’t own gold since the value of paper money and most other assets will be totally destroyed.

Not only does the technical position of gold and silver look very strong, but so do many of the fundamentals. The paper gold position is getting totally ridiculous. In the futures market there are at least 300 ounces of paper claims, and possibly as high as 600, for every ounce of physical gold. It is guaranteed that this market will default at some point in the not too distant future. The futures exchanges certainly can’t deliver when the paper gold holders ask for physical delivery.

Most banks are in a similar position. Any bank happily sells paper gold without any physical backing at all. Also, the bullion banks have been running down their stocks for the last few years as China and India have taken consistent delivery of major purchases.

Eric, what is even more fascinating is the position of gold held by governments. Most governments don’t ever do a full physical audit of their gold. And if they do they keep the result confidential. The reason for this is clear. They don’t have anywhere near the gold they claim to possess. The Germans asked for their gold back from the US a couple of years ago and only got a fraction because there clearly was no gold left. Since then, very few Western governments who hold gold in the USA, UK or France dare to ask for the gold back since it most probably isn’t there.

Most Western governments have been permanently leasing or selling their gold without declaring their official positions. One exception is Canada, which has actually been honest and just revealed that they have sold the last of their gold. They declared that gold doesn’t give a good return and it is not easy to trade. Instead they bought dollars and pounds. Eric, will this be the sign? A central banks sells their last gold and buys currencies that are guaranteed to become worthless. 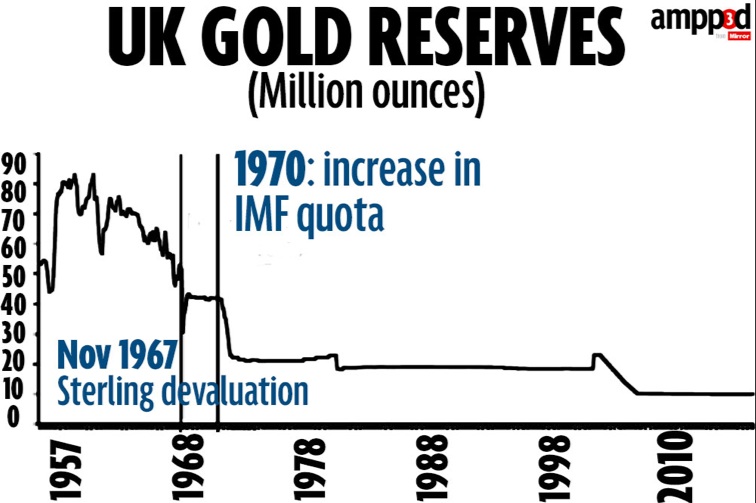 This is just like in 1999 when the UK and Switzerland sold most of their gold at the bottom of the market. But at least one central bank tells the truth. If other Western central banks revealed their true positions, I am convinced that we would find out that they have less than half of what their official holdings are. And China has a lot more than they officially declare. At some point in the next few years this will all come out and be the catalyst for an explosion of the gold price.

The Swiss gold import statistics have also given us proof that governments are selling gold covertly. The Swiss refiners dominate the global production of gold bars and are therefore big buyers of gold. In January 2016 they bought 61 tons of gold form the UK. This is clearly bullion banks selling on behalf of Western governments. These are 400 ounce bars that are recast into 1 kilo bars for export to China and India. The Swiss also bought 36 tons from Venezuela in January. This is a country with a bankrupt economy and collapsing currency which is selling the only asset that could save them, or at least improve their situation.

Finally, Eric, I know that the exact timing of events is irrelevant in a world with massive risks and which sadly will look very different in the next few years. Nevertheless, it looks like we could get some major moves in markets in the coming weeks and months. This will be a strong resumption of the downtrend in stocks and the uptrend in metals. So from a risk point of view, now is the time to be fully protected against these potential moves.”

***ALSO RELEASED:  Gerald Celente On Why People Are Buying Gold And Why The Price Is Headed Much Higher CLICK HERE.