The centrally planned markets may have done very little recently, but today James Turk told King World News that a short squeeze is developing in the gold market as the next financial crisis is now just around the corner.

James Turk:  “Even though they didn’t gain much in price, today was another good day for gold and silver, Eric. Both precious metals were steady and refused to give up ground. They both continue to chew through the enormous amount of paper that shorts and central planners have been selling in an attempt to cap prices…

James Turk continues:  “We have seen how successful this price capping has been countless times in the past, but this time it is the shorts who should be worried – not the longs. Gold and silver are trading differently, which I believe is a direct result of the tight conditions for physical metal.

What’s more, the momentum is building to get hold of physical gold and silver. I think the reason for this shift in thinking to hold physical metal instead of paper is a direct result of a point I mentioned in our interview this past weekend. There are banking problems looming on the near horizon that look ominous. I therefore want to share with KWN readers two charts of XLF, which is an ETF of banks and financial companies. One would never know that the Dow Jones and other market indices are at record highs by looking at this long-term XLF chart. 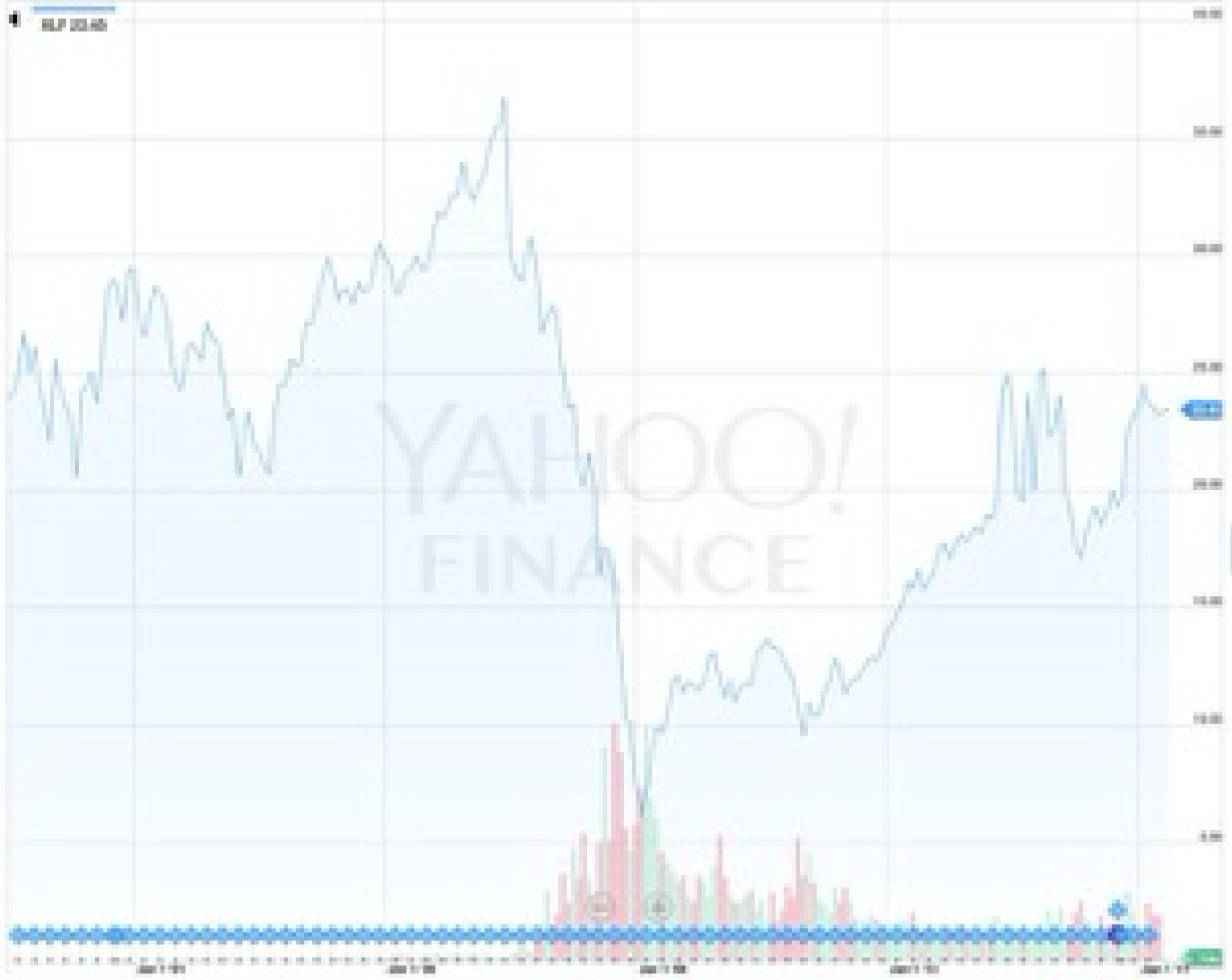 Even though XLF has had a good rally from its low price reached during the 2008-2009 financial crisis, XLF is still well below its pre-crisis high. This failure to take out its previous high makes the XLF stand out like a sore-thumb compared to the major market averages setting new price records. This divergence shouts out the XLF’s relative weakness to the rest of the market. But there is even more reason to worry. This relative weakness is coming to a head. Look at this short-term XLF chart. 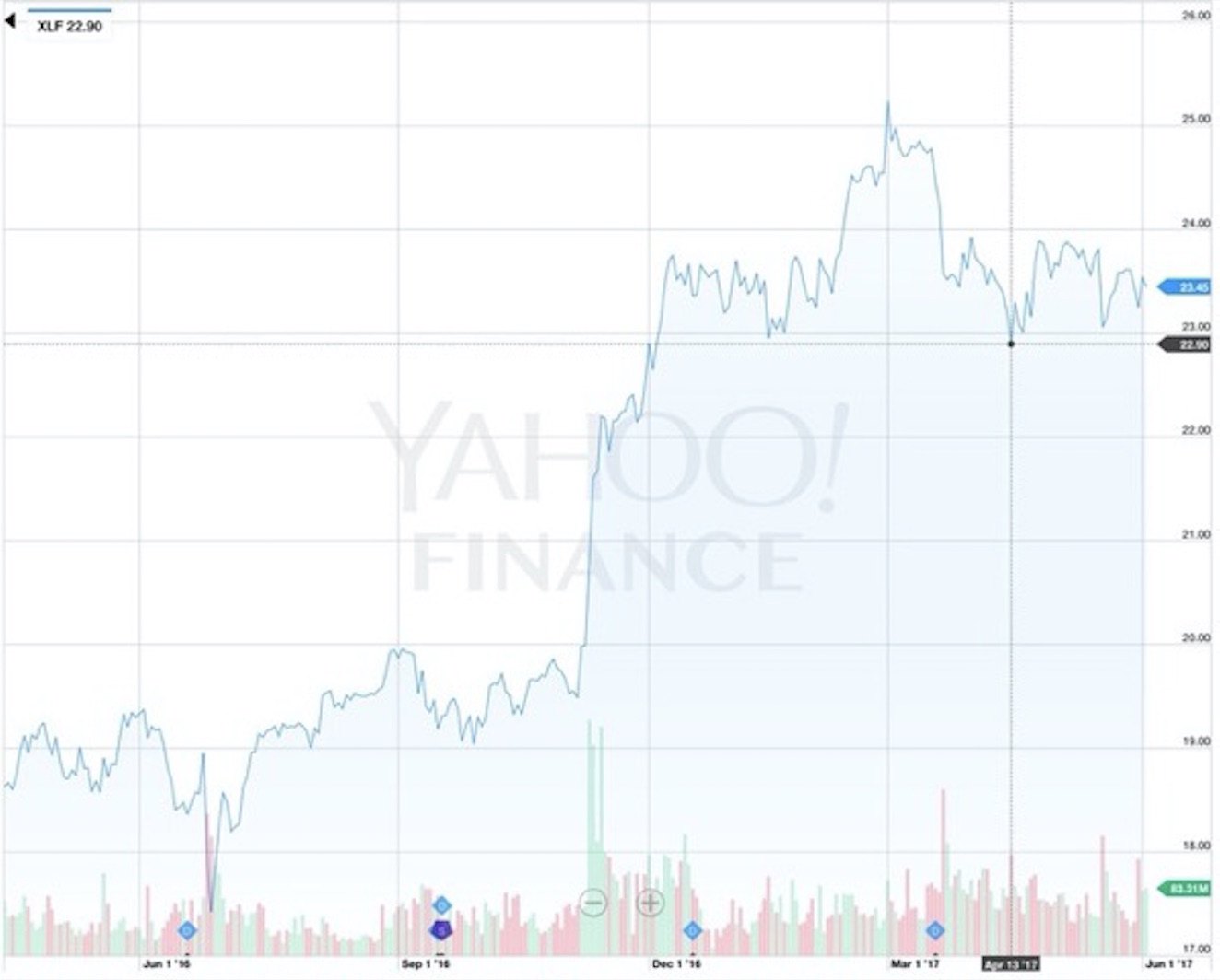 The XLF is carving out a classic head-and-shoulders pattern. If XLF takes out the $23 area, then look out below. 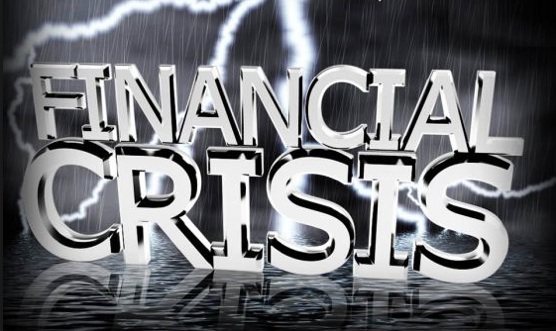 Next Financial Crisis Just Around The Corner
There is, however, more significance to the completion of this head-and-shoulders pattern than just lower prices for the XLF and the equities of many banks and financial companies. The XLF could be giving us an early warning sign that the next financial crisis is just around the corner. It is a reasonable conclusion. Recurring financial crises are endemic to the unsound monetary and banking system prevailing today that has been built upon fiat currency and fractional reserve banking.

The last banking crisis started ten years ago when Northern Rock collapsed in the UK. Ten years is a long time, suggesting another one of the recurring banking crises is due. Given the fragility we are seeing in places like lenders to Canada’s real estate market or perhaps China’s shadow banking market – and given the global interconnectivity of financial markets today – it is no wonder that XLF is looking so weak. What’s worse, it is on these two clay pillars of fiat currency and fractional reserve banking underlying today’s financial system that banks have built a mountain of debt that is unsustainable, and politicians have made countless impossible promises that can never be fulfilled.

Gold Short Squeeze
All of this brings me back to the short squeeze developing in gold, Eric. The weakness in XLF and the developing short squeeze in gold are interlinked. We can see this interlinking by answering one question. What is it that these gold buyers demanding physical metal are looking for? They are looking to protect their wealth by selling overvalued risky assets like the XLF and seeking the protection of gold and silver, which are sound moneys without counterparty risk. In other words, Eric, if there is another financial crisis on the horizon, the watchword for one’s wealth going forward is safety. And gold and silver offer one of the best ways to achieve it.”

***ALSO JUST RELEASED: Greyerz – Whether People Believe It Or Not, A Massive Global Collapse Is Coming CLICK HERE.