On the heels of more Executive Orders from the Trump administration, today the man who has become legendary for his predictions on QE, historic moves in currencies, warned King World News that we now have the perfect recipe for a global disaster.

Global Disaster & The Antidote
Egon von Greyerz:  “Investors in most countries make the mistake of measuring their returns based on their local markets and their domestic currency. This might have worked when they only had access to their local investment market. But that time is long gone. Now we have a global market and most Western markets have access to securities worldwide. In most countries, whether it is Germany, the UK or Japan, investors measure returns in their local currency. Where that is most prevalent is in the US because of the size of the US economy and the importance of the dollar. This means that few Americans look at investment markets or currencies in other countries…

Egon von Greyerz continues:  “Recently someone commented that I personally have not seen the US stock market as a good place to invest and therefore missed a massive opportunity. That is a correct observation. I consider a market which is greatly overvalued as high risk and therefore best to avoid even if it can go higher. Of course someone who sold the US stock market in 2000 bought back in 2002, got out in 2007 and invested again in 2009 could have made a lot of money, but that is not the way the average investor trades except in hindsight.

There are two main types of investors. The typical investor seldom sells and therefore rides through every storm in the hope that stocks go up perpetually. That theory has worked wonderfully for long periods in the last 100 years. There have of course been periods of severe exceptions like after the 1929 crash and the 1932 bottom. Investors at that time had to wait 25 years to get their money back.

Then there are investors who trade the market regularly. Many of these buy high and sell low, thus continuously underperforming the market.

Overall stocks have been a great investment for the last 100 years due to the massive credit expansion and money printing worldwide. But if we, for example, critically analyze the real return for a US stock investor who has been long the S&P index since the beginning of this century, we get some interesting results:

The above table gives very different results for the same investment. For an American measuring in dollars, it looks like a decent return. But 56% over 16 years is actually only 2.8% per year (plus dividends) which is nothing remarkable. Most Americans just look at their return in dollars. This is acceptable if the currency is strong. But this is not the case with the dollar which has been extremely weak since 1971. A country that continuously lives beyond its means will always pay in the form of a weakening currency. In relation to the Swiss Franc, the dollar has lost 77% since 1971 and 37% since 2000. So if we measure the performance of the S&P index in Swiss Francs since January 2000, it has declined by 2%! Most American investors will think that this is irrelevant to them but that is flawed thinking. A return of 56% that comes down to -2% if measured in a different currency, shows that the gain measured in dollars is mainly due to the weak currency. Thus the 56% gain is not a real gain but just a measure of inflation.

But to find out what the real performance of the S&P has been in this century, we must use a currency that can’t be printed and that over time maintains constant purchasing power, namely gold. And now the picture looks very different. Instead of a 56% gain in fiat dollars, the S&P has lost 63% measured in real money.

Governments constantly try to fool the people by debasing the currency. This is why governments hate gold because it reveals the truth by exposing their total mismanagement of the economy. Although the gold price is also manipulated, especially in the paper market, it is still the best measure of real performance. And the reason for this is that gold is the only money which is not man-made. Gold is nature’s currency and will continue to be the only money that will survive throughout history.

Coming back to the table above, very few people understand that an illusory $56,000 gain actually is a loss of $63,000 measured in real money. The difference of $119,000 shows how dangerous it is to measure performance and wealth based on the wrong measuring rod.

As I have explained in many interviews, the destruction of paper money will soon accelerate as governments around the world try to save a bankrupt world economy and financial system. In relation to gold, stocks, bonds and property will all decline by another 90% at least in coming years.

Globally We Now Have The Perfect Recipe For Disaster

1.  All major economies, USA, China, Japan, Europe and Emerging markets have debt which have grown exponentially and will never be repaid.

2.  The financial system has a gross exposure of over $2 quadrillion. This will all collapse when counterparty fails.

3.  With the Trump administration leading, the world will soon enter the final spending spree which will accelerate the velocity of money and lead to hyperinflation. This will in turn finish off the value of most major currencies until they reach zero.

4.  1-3 above will result in a deflationary implosion of the financial system. This will get rid of all debt and reduce the value of most assets by at least 90%.

5.  This total debt destruction is the only way to put a world on a sound footing for future growth and prosperity. 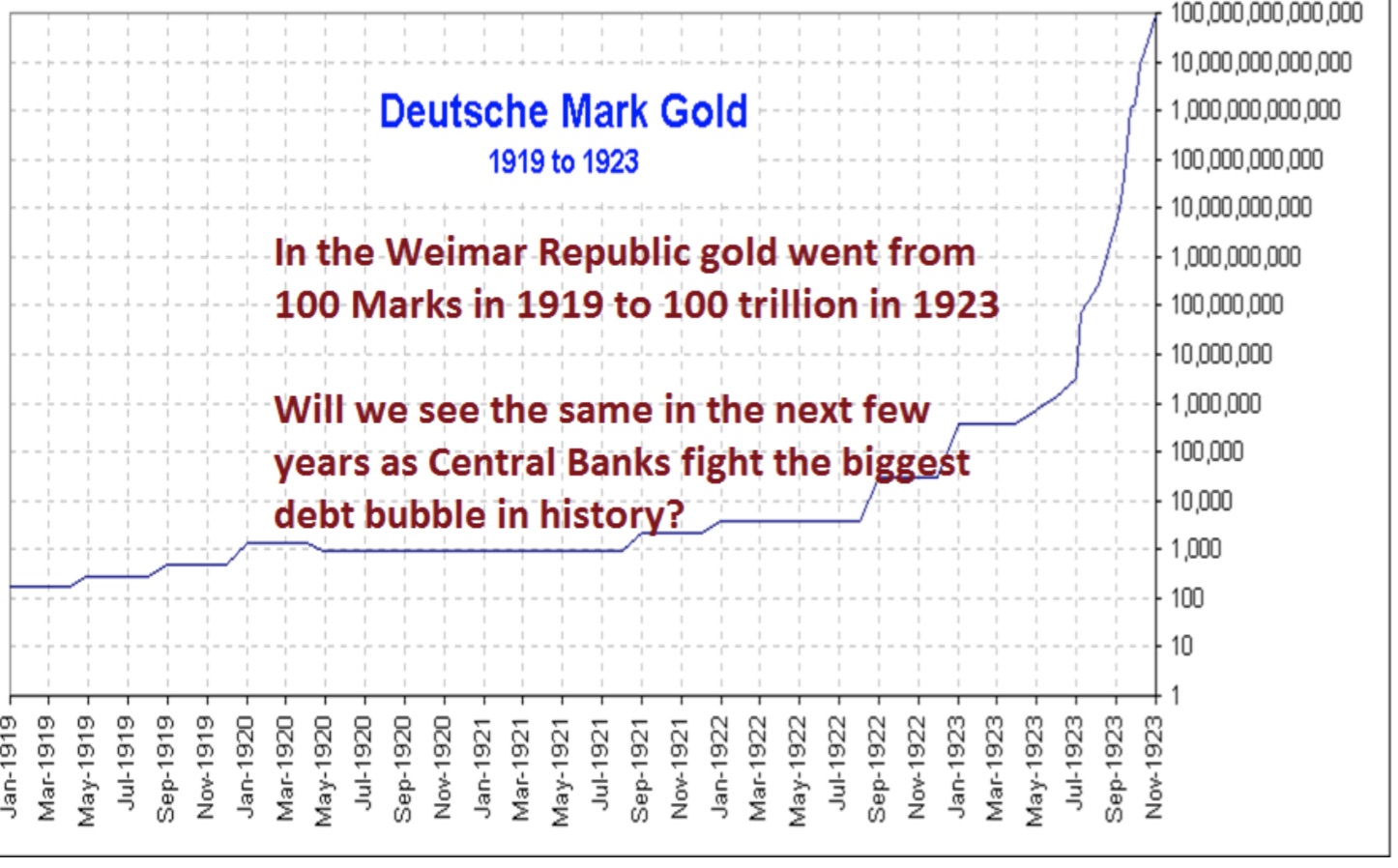 But the absolute level of the gold price is totally irrelevant. What is more important is that gold will be the best form of wealth preservation and insurance. Gold will also at least maintain its purchasing power and most likely perform a lot better. Gold also does well in deflationary periods, although it will then come down from the hyperinflationary highs. But so will prices of all goods and services. At the beginning of the deflationary implosion, there is unlikely to be a functioning banking system. Gold will then be the only money available and therefore it will play a critical role in saving people from the coming financial disaster.”

***ALSO JUST RELEASED: A Look At The Achilles Heel Of The U.S. As The World Hurtles Toward Gold CLICK HERE.