As we near the midway point of what promises to be a rowdy month of trading in June, today the man who has become legendary for his predictions on QE, historic moves in currencies, told King World News that the world is set to plunge into chaos over the next 6 months.

Egon von Greyerz:  “This past week, we were again reminded of the global instability and disequilibrium. In the UK, the conservative Prime Minister Theresa May decided 8 weeks ago to call an election. This was done due to the conservatives being 20 percentage points ahead of their Labour rivals in the opinion polls, which would have led to a strong backing for the Brexit negotiations as well as another five years in power. But things went disastrously wrong. An extremely badly run campaign by Mrs May and an opportunistically clever campaign led by the Labour leader Corbyn have led to a hung parliament. The conservatives are now dependent on a small Northern Ireland party as well the Scottish conservatives. The effect of the election is a total political chaos that will weaken a UK which is already in a mess with a high debt and untenable budget and trade deficits…

Egon von Greyerz continues:  “But the EU bureaucrats led by Mr Junker are of course delighted. They know now that Mrs May who was for a hard Brexit will have to go and the EU will have the upper hand to reach a soft Brexit.

So again, the globalists have sadly won, just like they did in the Netherlands and France recently. The unelected and unaccountable Brussels bureaucrats are absolutely elated. They can now continue to run Europe irresponsibly with open borders for anyone who wants to enter, with a currency which only benefits the Germans, and with a financial system which is rotten in its core and totally bankrupt. But it is not just the financial system which is bankrupt because so are most major EU nations from Greece, Italy, Spain, Portugal, France, UK etc. The illustration to my article “Deus ex Machina” written in December 2011 tells the story: 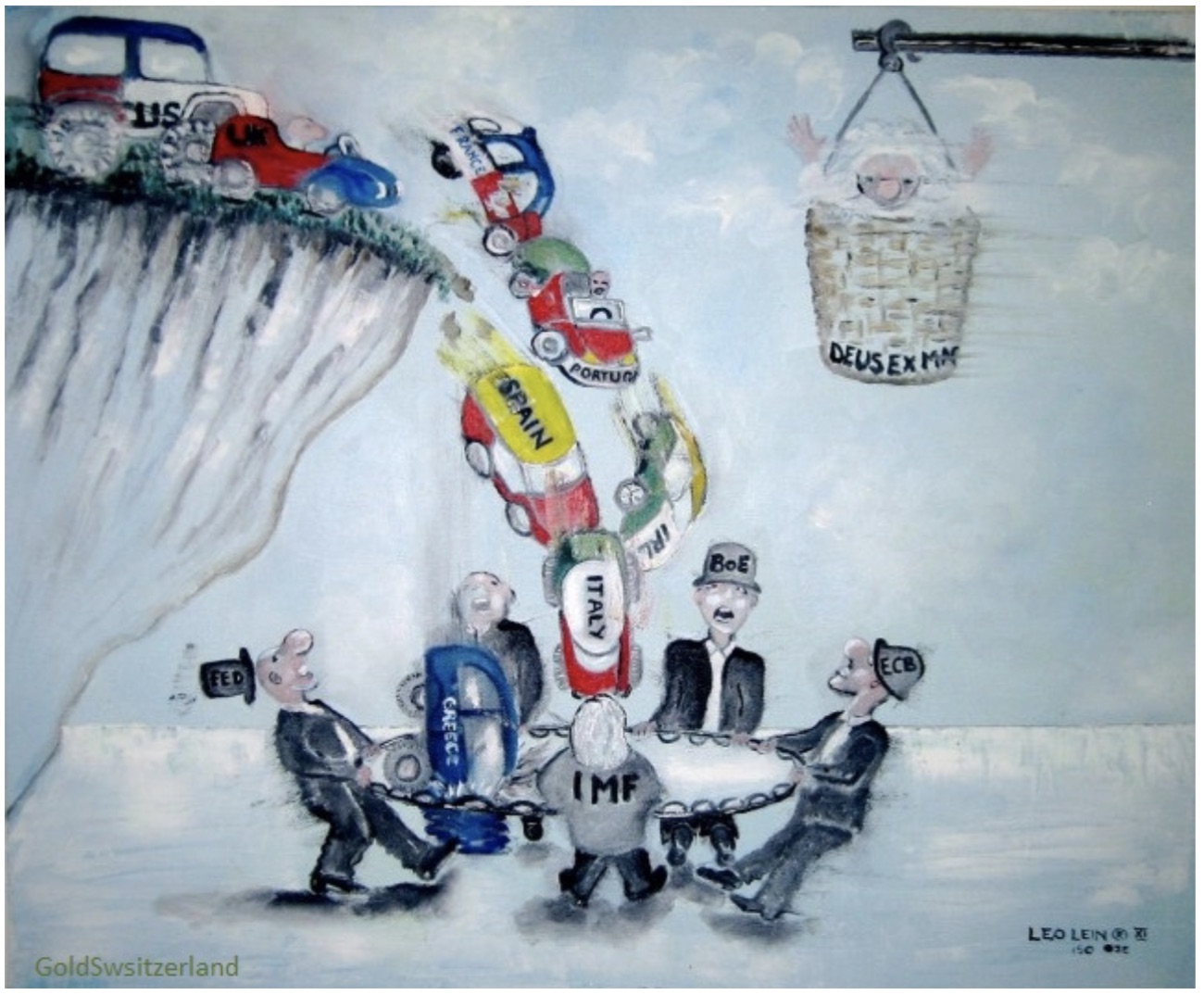 Events might have taken a bit longer to unravel but the trend is irreversible. Country after country will crash under the burden of debt, and this is not just European countries but also China, Japan, emerging markets and of course the US.

We are now at a time in history when extraordinary events will be the norm. The world is currently as far from a harmonious equilibrium as it has ever been in history. The masses are ultimately responsible for $2.5 quadrillion of debts derivatives and unfunded liabilities. None of this will ever be repaid, and that astronomical sum will grow exponentially as governments accelerate their money creation in their futile attempt to save the world. On the other side of the scale is a very small elite, being a fraction of 1%, who owns most of the assets in the world. But they are of course not responsible for the debt which is being created so they can continue to grow their wealth at the cost of ordinary people, who in real terms are worse off every year.

But the disequilibrium in the world is not just financial, it is also moral, ethical and political. In the final stages of an era, all values disappear and the ugliest side of mankind appears. We see this currently all around us. US politics has become a total farce and better than any television drama. It is hard to believe what is happening is actually real. The problem is that what we are seeing is a stark reality that has serious consequences for the US as well as for the rest of the world. It will not only lead to financial disaster but also serious political and geopolitical disasters. Only afterwards will the historians know if the cyclical peak in the world economy that we are experiencing now is just the end of a 100-year era from the creation of the Fed in 1913, or a 700 year period from the beginning of the Renaissance or from the Roman Empire 2000 years ago.

Whatever cycle we are in, it will lead to a very extended period of misery and economic hardship for the world. Since the $2.5 quadrillion liabilities can never be repaid or run down in an orderly fashion, in the next few years we will experience a debt implosion that will be totally devastating. Not only will debt implode but also all the assets that have been fueled by the debt bubble. Hopefully it will not take 500 years like the Dark Ages after the fall of the Roman Empire. But the world is likely to see an extended decline that will affect all of us.

It is primarily the disastrous US monetary policy since 1913 which has created the biggest debt mountain in history. It is not easy to illustrate what $2.5 quadrillion actually means but we can start with the US Federal debt of $20 trillion. 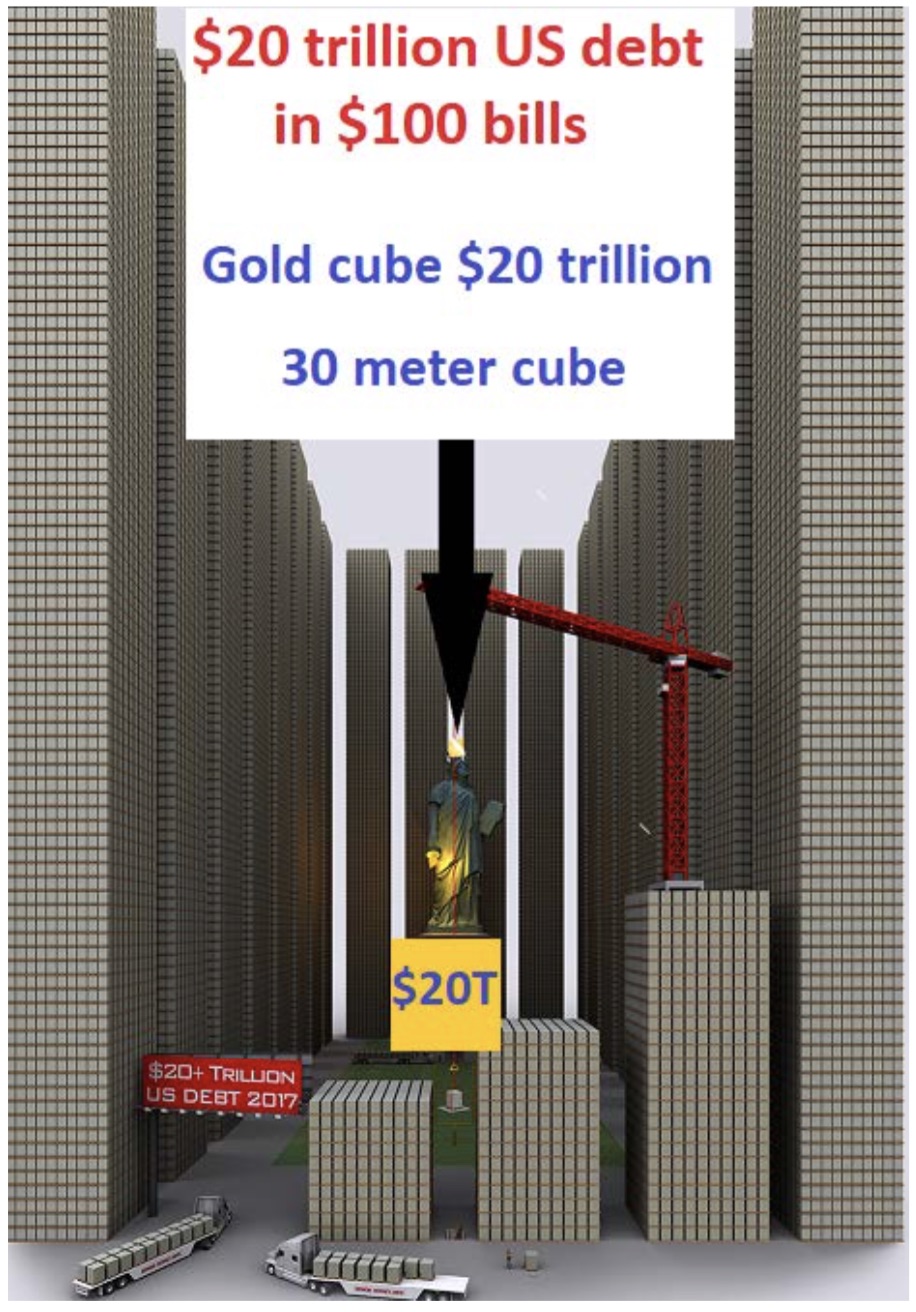 The illustration shows the size of the US debt in $100 bills in relation to the statue of liberty. The statue is standing on a pedestal of gold worth $20 trillion. The cube has 30 meter sides and weighs 500,000 tonnes. There is only one problem – 500,000 tonnes of gold does not exist. All the gold ever produced in the world is estimated at 170,000 tonnes.

So if the US debt would be backed by gold, it would require 3x more gold than what has ever been produced. If we then look at the total gold required to cover all global liabilities of $2.5 quadrillion, it would be 125x greater at 62 million tonnes. That is 365 times more gold than exists. If we were back to the gold standard rather than fiat money with zero intrinsic value, gold would need to be worth 365x $1,270 or $463,000. That price of gold is based on all the gold in the world including jewelry. But if we just take sovereign gold of officially 30,000 tonnes backing global liabilities, the gold price would need to be 5.7 times higher or $2.6 million. No, I am not dreaming. I am not expecting a gold price in today’s money of $2.6 million anytime soon. I am just proving that as the world went from real money to fiat money, the value of real money or gold does not in any way reflect the incessant creation of paper money. Whatever the real, unmanipulated price of gold would be, it is likely to be multiples of the current price, whether that is $10,000 or $50,000.

What few people realize is that gold has been the best investment in this century in all major economies. For example, gold in pounds is up 5.7X since 2000, while the FTSE 100 is only up 8%. This is an outstanding return and also the ultimate wealth preservation insurance. But it must obviously be physical gold, stored outside the banking system. We went seriously into gold in 2002 for our UK investors at £200 per ounce against the current £1,000. Since we were both concerned about the pound as well as the UK and global economy, we recommended up to 50% in gold at the time. But even at a much lower percentage, the investors have done remarkably well. The unique advantage UK investors have is that they can buy Sovereign gold coins which are exempt from capital gains tax.

There is clearly no science to determine what percentage of investment assets should be in gold. My recommendation is that investors should buy enough gold to fall back on if there are major problems in the financial system.

In my view 10% into gold is an absolute minimum, but preferably it should be much more. Since our investors are strong believers in wealth preservation, the majority hold at least 25%.

For anyone who lives in a hyperinflationary economy like Venezuela or Argentina, gold is an absolute lifesaver and thus a necessity for the ones who have surplus funds. But you don’t need to be wealthy to own gold. For $40 anyone can buy one gram of gold per month. Over time that could become an important sum as gold rises and the crisis comes.

6 Months Of Global Shocks
The coming six month period and especially the autumn, is likely contain a lot of shocks. The investment community is totally oblivious of the risks they are taking by having most of their money in assets that have reached stratospheric values, whether it is the stock market at a 30 p/e, or property prices at bubble values worldwide, or bonds at zero percent. All these asset markets only have one way to go and that is massively lower. Investors must not believe that they will be saved by central banks again. The world is past the point of being saved and must now suffer the consequences for the excesses of the last 100 years. If there was a Deus ex Machina, he needs to come down soon, but sadly I don’t think that will happen.