With the next global crisis dead ahead, gold will stand tall as the chaos unfolds.

Continue reading the Incrementum piece below…

The following chart shows the trends in the real federal funds rate and the gold price since 1970. 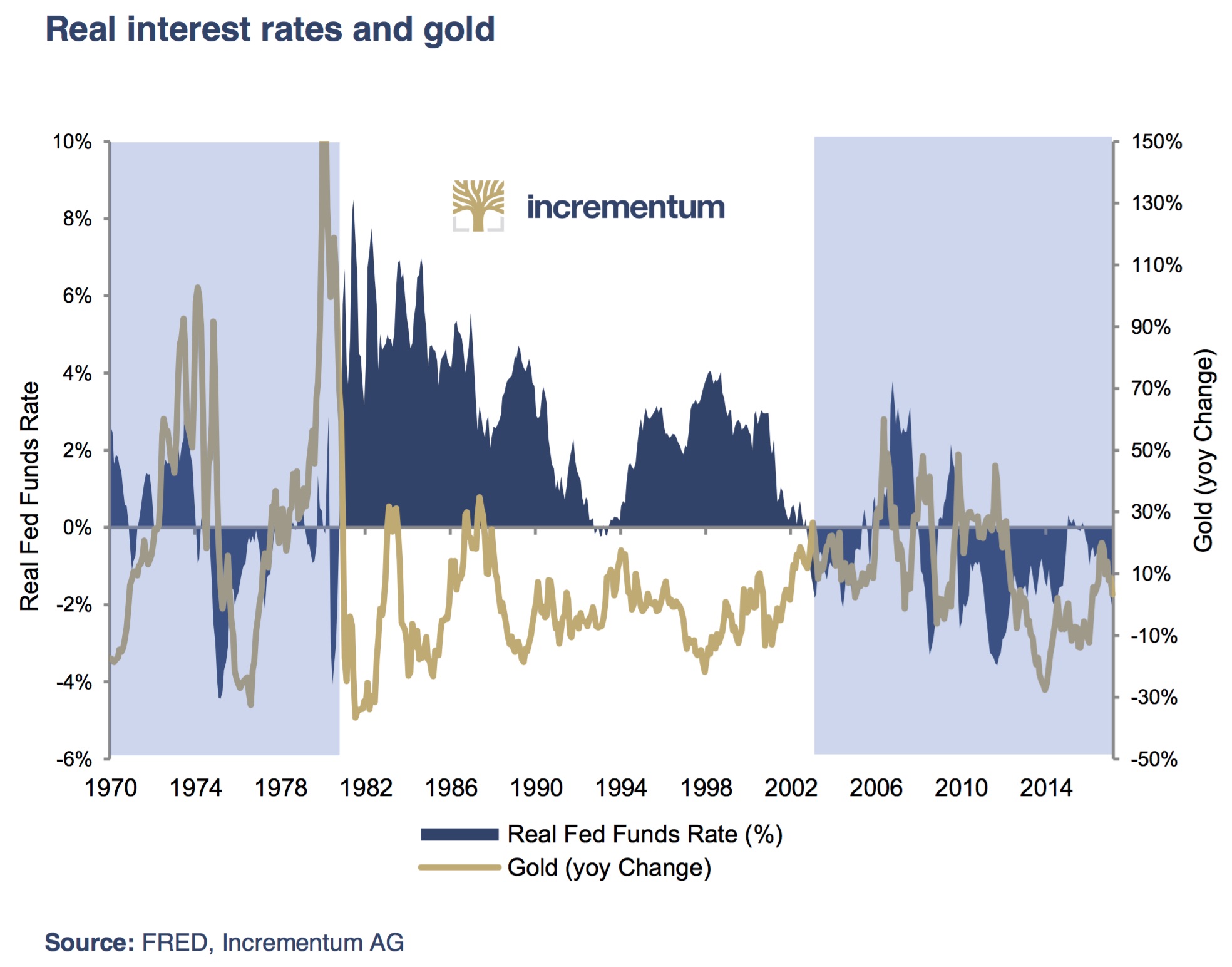 It turns out that time periods in which real interest rates are in negative territory for most of the time (highlighted in blue on the chart) go hand in hand with very strong gold prices. In the time period 1970 to 1980 gold climbed from 34,90 to a peak of 850 USD, in an environment of mostly negative real interest rates. The same applies to the 2003-2017 time period, in which gold rose from 356 to 1,260 USD (as of end of May2017). That represents a cumulative performance of approximately 9% per year. Conversely, markedly positive real interest rates create a relatively difficult environment for gold, as the period 1980 to 2003 makes clear.

The performance of different asset classes in different real interest rate environments is relevant from an investment and portfolio hedging perspective. The following table shows the average monthly performance of gold, silver, the S&P 500 Index as well as the Dollar Index since 1970 in a variety of real interest rate environments (in terms of the real Fed Funds rate). 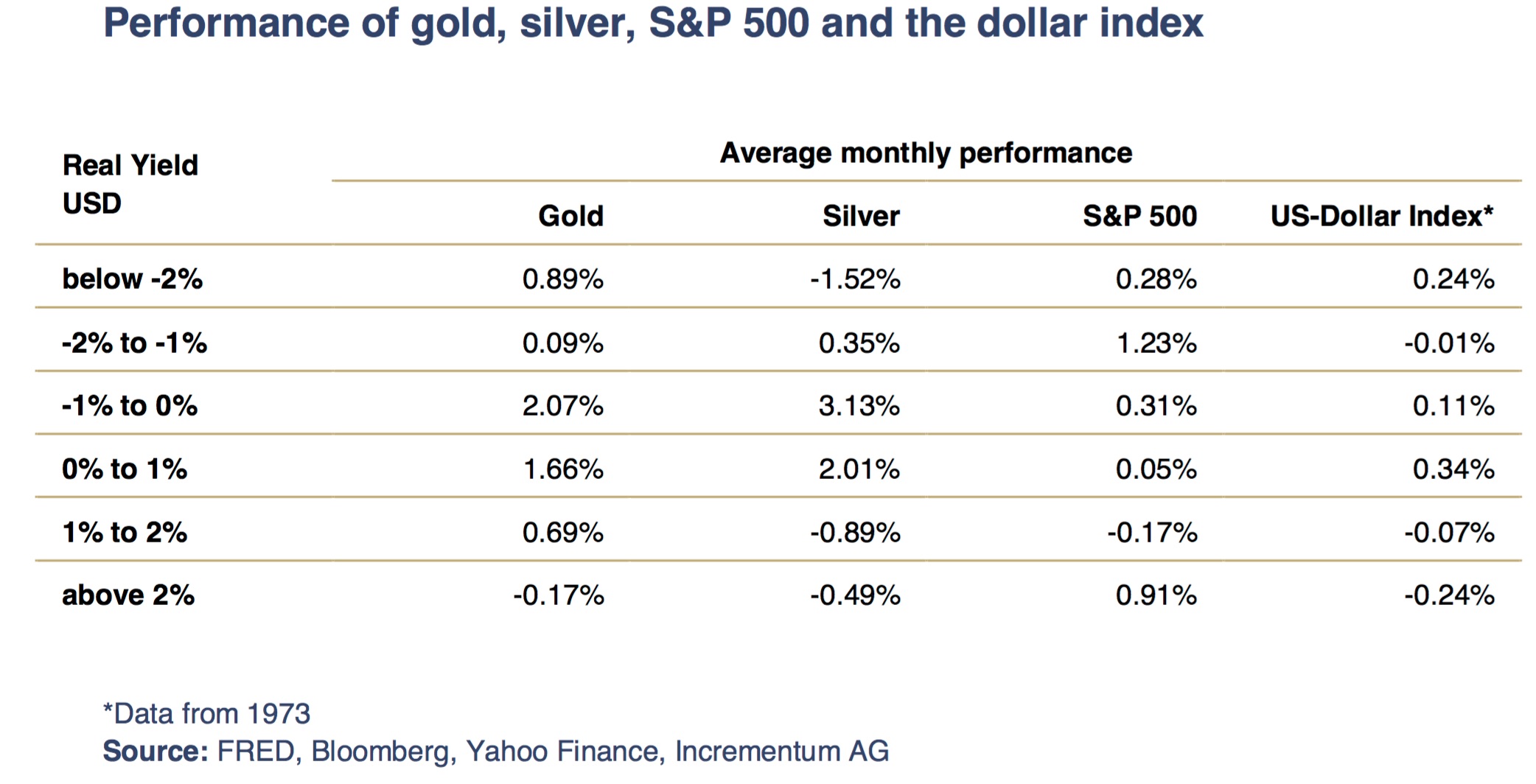 The historical record indicates that gold and silver performed best in times when the real federal funds rate was in a range from -1% to +1%.

While gold performs best when real rates are negative, silver has problems with an environment of negative real rates. That makes sense intuitively, if one interprets the real federal funds rate as a proxy for expansionary or restrictive monetary policy.

A negative real federal funds rate (price inflation > federal funds rate) traditionally signals that monetary policy is accommodative or expansionary. By contrast, a clearly positive real federal funds rate (federal funds rate > price inflation) indicates a restrictive or hawkish monetary policy. As silver has a sizable demand component as an industrial metal in addition to monetary demand, it is no surprise that its performance often differs from that of gold. One must also keep in mind that silver tends to attract more speculative interest, not least because it is the smaller market. As the table also illustrates, volatility in silver tends to be far pronounced than in gold, i.e., it both outperforms to the upside and underperforms to the downside.

Along with the above, one should consider the following: empirical data such as these do have value in practice, and being aware of them is quite important for investors. It should be noted in this context that chart comparisons also show that there are frequently sizable leads and lags in evidence – at times the gold market discounts the future behavior of real interest rates in advance, and at times it reacts to the appearance of positive or negative real interest rates with a slight lag. The market is very often right, but it is not always right – in fact, it is a truism that the market is wrong at turning points, since at major lows and major peaks, it discounts a future that is not going to play out.

Lastly…
Lastly, experience also shows – and this is actually logical in a fiat money system in which the paper dollar is legal tender and must be purchased to liquidate dollar- denominated debt – that gold will tend to serve as a source of liquidity in the early stages of crises.

For instance, at the height of the 2008 panic, gold prices briefly declined and the US dollar soared, as banks outside the dollar area scrambled to obtain dollar liquidity and real interest rates spiked as inflation expectations decline rapidly (a situation known as a “deflation scare” – the gold price quickly recovered from this and soared subsequently). Gold reserves were used as collateral for dollar loans, and the lenders hedged the gold exposure they acquired when accepting gold as collateral. Such hedging activities always involve outright selling somewhere down the line of the chain of transactions. Gold is always and everywhere accepted as collateral – when push comes to shove, its acceptability as collateral exceeds that of any debt instrument, including treasury bonds. Gold is the only money that can stand tall even without “backing” from an outsized military force.

***ALSO JUST RELEASED: The ECB Is Already In A Panic CLICK HERE.