The top trends forecaster in the world warned King World News about what has the central planners so terrified.  This piece takes a trip down the rabbit hole of the Fed’s massive propaganda machine, and there is also a powerful chart included that all KWN readers around the world must see.

October 14 (King World News) – Gerald Celente — Nearly one year ago, on 29 October 2014, the Federal Reserve announced it would end QE3, its third round of bond-buying stimulus that ballooned its balance sheet by $3.5 trillion…

No longer worried about global weakness with equity markets sound, and “that the likelihood inflation running persistently below 2 percent has diminished,” the Fed declared there would be no need for QE4.

While pledging to maintain its Zero Interest Rate Policy it had in place since 2008 for a “considerable time,” the expectation on the Street, based on the Fed’s bullish growth, inflation and equity market forecasts, was for the first round of interest rate hikes to begin by mid 2015.

But just one week later the story changed. The reason not to raise rates was no longer the reason. Instead, a rate hike was on the near horizon.

Fed Chairwoman Janet Yellen, speaking at the University of Massachusetts, signaled that the Fed may raise rates before year’s end, because inflation was set to rise and the Fed “is monitoring developments abroad, but we do not anticipate the effects of these recent developments to have a significant effect.”

Another Week, Another Story

On 8 October, when the minutes from the mid-September FOMC meeting were made public, they told a different tale than the one Yellen told at the university in Amherst, Mass. While Yellen did not “anticipate the effects of these recent developments” abroad to have “a significant effect,” and thus a rate hike was probable before year’s end, the minutes from FOMC’s meeting revealed a committee deeply concerned with market indexes that “were quite volatile,” and the implications of world events on global economies.

“Over the intermeeting period, the concerns about global economic growth and turbulence in financial markets led to greater uncertainty among market participants about the likely timing of the start of normalization of the stance of U.S. monetary policy,” the minutes stated.

King World News note:  The chart below shows a downward trend channel in the U.S. 10-Year Treasury yield.  This is an ominous sign for the future of the United States and the world. 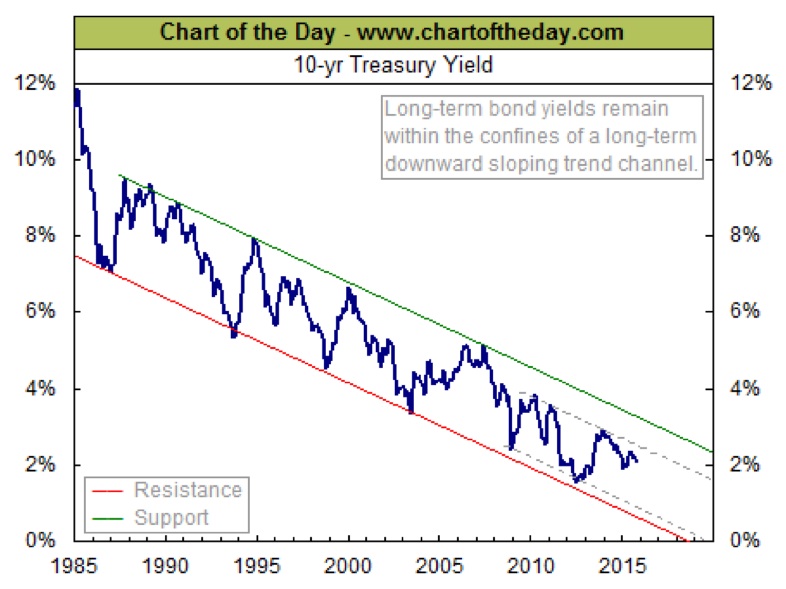 Is This What Has The Central Planners So Terrified?

Is the Fed afraid to do anything considering the possible implications of raising rates at a time of “concerns about global economic growth and turbulence in financial markets,” thus the mixed messages? Or is this just another round of Fed ineptness?

Indeed, former Federal Reserve Chairman Ben Bernanke admitted in his new book that the Fed underestimated the dangers leading up to the Panic of ’08. Considering the uncertainty of decision making policies, could it be the Fed does not know what to do?

Trend Forecast: Regardless of Fed policy, we maintain our forecast for a major equity market meltdown by year’s end and recessionary pressures building worldwide. ***KWN has now released the incredible audio interview with Michael Belkin, the man who advises the most prominent sovereign wealth funds, hedge funds, and institutional funds in the world. Belkin covers the historic rally he expects in gold and the mining shares as well as what he expects to see in global markets for the rest of 2015, and you can listen to it by CLICKING HERE OR ON THE IMAGE BELOW.

***ALSO JUST RELEASED:  Richard Russell Says Americans Are Scared To Death And He Declares What Will Confirm A New Bull Market In Gold CLICK HERE.

Putin Is About To Rock The Gold, Oil & Currency Markets