Eric King:  “Bill, the Fed has rates rates today.  What could go wrong as a result of this?”

Bill Fleckenstein:  “What can go wrong is a long list of things.  First, the economy has been weakening at the margin in the United States and the world economy is also weak.  We have a budding problem in the junk bond market and therefore a problem in junk bond funds.  We’ve already seen what happened to a couple of these funds…

Bill Fleckenstein continues:  “So there may be some illiquidity issues that are a consequence of the prior easings that took place, which, perversely, are manifesting themselves now as the Fed does its baby, little hike.

So there is the fact that the economy is weak, earnings numbers haven’t been great, most stocks aren’t doing that well, and credit market issues.  The reality is that nothing has been fixed and we could see some problems in the money funds, depending on the Fed’s ability to actually make this 0.25 basis point hike happen.”

Eric King:  “Can this 0.25 basis point hike cause some things to unwind as you said, ‘perversely,’ just because of the timing and the confluence of the other factors?”

Bill Fleckenstein:  “The only thing that might surprise some people is if, mechanically, the tools that the Fed thinks they have in order to make this happen without doing matched sales — i.e. shrinking their balance sheet, which they don’t want to do — and if they couldn’t somehow make the 0.25 basis point hike stick, that would be interesting, but we won’t know that for a little while.  But in and of itself, the 0.25 basis point hike doesn’t mean a damn thing.”

Eric King:  “I couldn’t help but notice that gold did not get crushed today, which many had incorrectly predicted would happen if the Fed raised rates.  You had said some time ago that you thought we would see gold rally on a Fed rate hike.  Now that the drama of the Fed rate hike is behind us, will gold continue to rally?”

Bill Fleckenstein:  “For 4 years now all that gold has done is go down and it didn’t matter what development took place.  Could this be the end of the bear market when the Fed finally decided to hike rates?  Yes, it could be.  I could see that as an outcome.  But does the fact that gold did not go down today mean that is the case?  Unfortunately, no.

Now, if we are several weeks removed from here and gold has managed to grind higher, then we can say, ‘yes,’ that was it for the bear market in gold.  And that could be the case.  The gold stocks have not broken down with gold hitting new recent lows and the COT is anything but bearish.  So you could make the case from a contrarian perspective that gold is done going down.”

Eric King:  “Bill, you know that I believe they are going to try to take rates negative in the United States because the U.S. would be bankrupt if we had rate normalization.  But if rates are in fact going negative in the U.S. in the fullness of time, isn’t this a strange journey to get there?”

Bill Fleckenstein:  “Yes, but people that read and listen to King World News don’t have the highest amount of confidence in the Fed to begin with.  So the fact that the Fed raised rates 0.25 basis points because they didn’t understand the nature of what’s going on in the economy and some of the credit markets, it would be incredibly perverse if the next step was to take rates negative.  But after all, that’s the only place they really have left to go.

However, the bigger issue is when that moment arrives, do people finally start to question the efficacy of the Fed’s policies and its omnipotence?  Because if that happens then a lot of what they do might not work.

So the confidence game that has been underway continues to work, and what we are really talking about for those of us who want the markets to force some kind of sanity in terms of the longer term problems we face, we will need the Fed’s credibility to get called into question, and we can’t have that until the next market break, unfortunately.”

***KWN has now released the extraordinary top 10 trends and predictions for 2016 from Gerald Celente and you can listen to the audio interview by CLICKING HERE OR ON THE IMAGE BELOW. 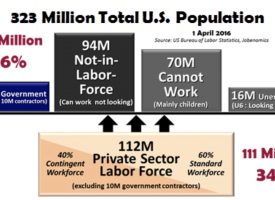