With crude oil surging along with the Dow and the U.S. dollar, today King World News is featuring a scary looking chart that helps explain why this will be a different kind of collapse than people think.

James Turk:  “Economic activity in welfare states around the globe is stagnant, Eric. That means living standards are declining. Even more worrisome are the years of profligate, runaway spending by politicians in these welfare states that have created an unserviceable debt burden…

Central banks have been trying to paper over these problems, but to no avail. Despite the cheerleading by vested interests, unemployment remains high in the overleveraged welfare states in Europe and of course the United States. All the central banks have managed to do is destroy wealth with their zero-interest-rate policy.

So far the newly created money from various QE programs around the world has had limited impact, but actions have consequences. In this regard, I am watching the following chart of money velocity. It is a scary chart, but what is it really telling us? 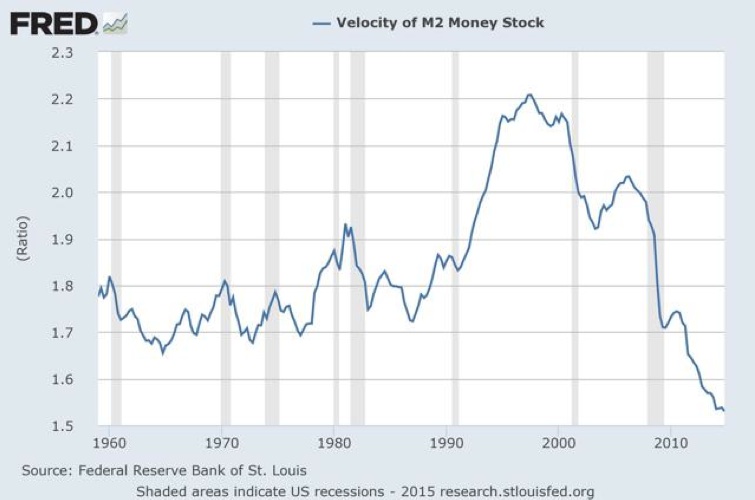 Velocity is in effect gross domestic product divided by the quantity of money in circulation, which in the above chart is M2, itself a broad measure of the total number of dollars.

This decline in velocity is usually viewed as a signal for a decline in economic activity because currency is not being spent fast enough. But I see it differently.

Currency and the goods/services being measured as economic activity are different sides of the same velocity equation. So saying currency has to circulate more rapidly is no different than saying goods/services have to be purchased more frequently, neither of which mean anything useful.

So rather than being any indication of economic activity, the importance of this chart to me is what it is telling us about the demand for currency.

This chart doesn’t measure absolute demand, which is impossible to do anyway. But it does provide an indication of the demand for the amount of currency in circulation.

The downtrend that began almost two decades ago is telling us that there is too much currency being created relative to economic activity. In other words, there is more currency in circulation than is needed for the level of economic activity being generated.

This result in the above chart is simple math. Since the peak in velocity in 1997, GDP has risen 2.1 times, while M2 has risen 3.1 times.

So we do not need all the dollars that have been printed by the Federal Reserve, and there is no indication that this well-established downtrend is about to reverse any time soon. Therefore, the stage is being set for monetary chaos. This chart is telling us that there are too many dollars being created, which will lead to a decline in the demand for the dollar.

A few weeks ago the head of the Congressional Budget Office said: “The growth in debt is not sustainable. Obviously, you can’t predict tipping points, but at some point this becomes a problem.” Well, there’s the rub, of course. We can never predict timing, but we can clearly see which way the above chart is heading.

We are headed for a collapse, Eric, but not like one we have ever experienced before. There will be a collapse, but not the one most people are expecting.

In the Great Depression the banks collapsed because of the inherent fragility of fractional-reserve banking. That led to an economic collapse, but the dollar back then was as good as gold and the dollar along with gold emerged the winners — assuming you had those dollars on deposit in a bank that didn’t fail.

Central banks are said to be kicking the can down the road with QE, zero interest rates, and other misguided policies. The road they are on is a dead end.” One of Michael Pento’s best audio interviews ever has now been released, where Pento shows why he is one of the greatest economists in the world by giving one of his most important interview ever discussing the coming financial carnage, what to expect from key markets next week, including gold, silver, stocks and bonds, what people can do to protect themselves and much more and you can listen to it by CLICKING HERE OR ON THE IMAGE BELOW.

A Note From Two Of The Greats On Fed Decision Day