Worried about the takedown in gold and silver, take a look at this…

“Gold is Money, Everything Else is Credit” — JP Morgan
April 27 (King World News) – Otavio Costa:  Once again, gold is playing a major role serving as a monetary asset and tangible anchor for fiat currencies. As insane as it sounds, the most credible central bank balance sheets today are the ones that have built that reputation by owning debt of other massively levered economies. As shown  in the chart below, this is already in the process of changing…

After many years of strong positive correlation with fixed income securities, gold is now rising despite the historic rout in global bonds. In our view, global bonds yielding negative in nominal terms are about to become obsolete. Their overall outstanding value just went $18 trillion to less than $3 trillion. Outflows from fixed income markets are likely to become inflows for tangible assets like gold. With rising inflation, particularly among developed economies, central banks and governments are being forced to improve the quality of their international reserves as an attempt to restore the credibility of their monetary systems. 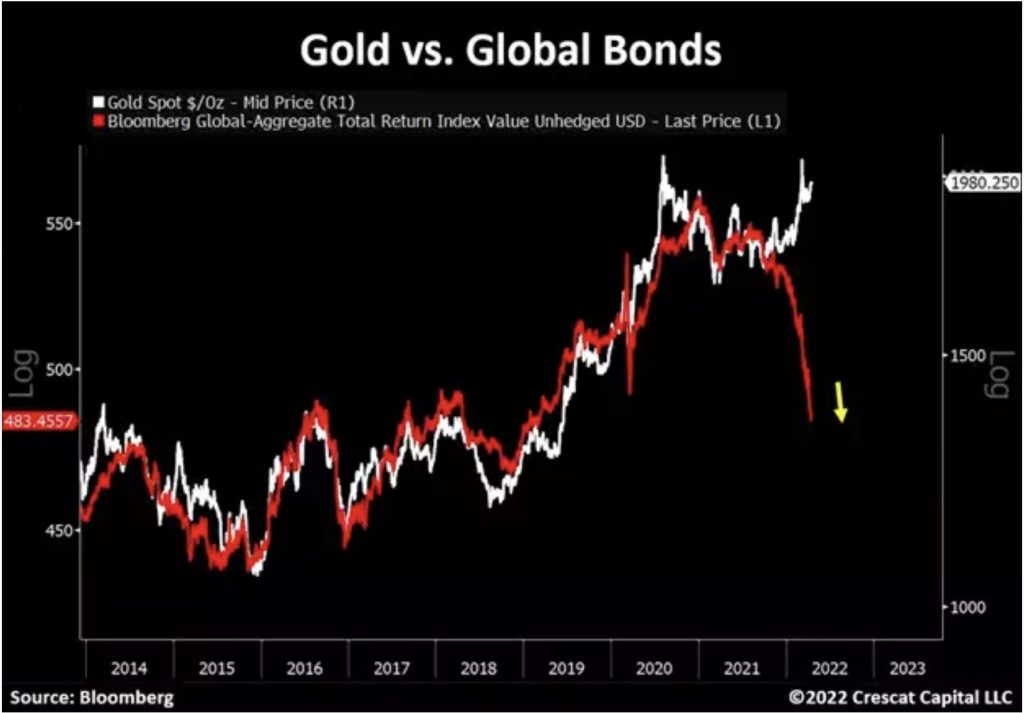 Peak of the Business Cycle
We are seeing a list of recession indicators flashing warning signals today. Beware of times when the spread of consumer confidence “present situation” vs. “expectation” is at cyclical highs. Last time this spread was as extreme as today was right before the tech bust and the 1973-4 recession. 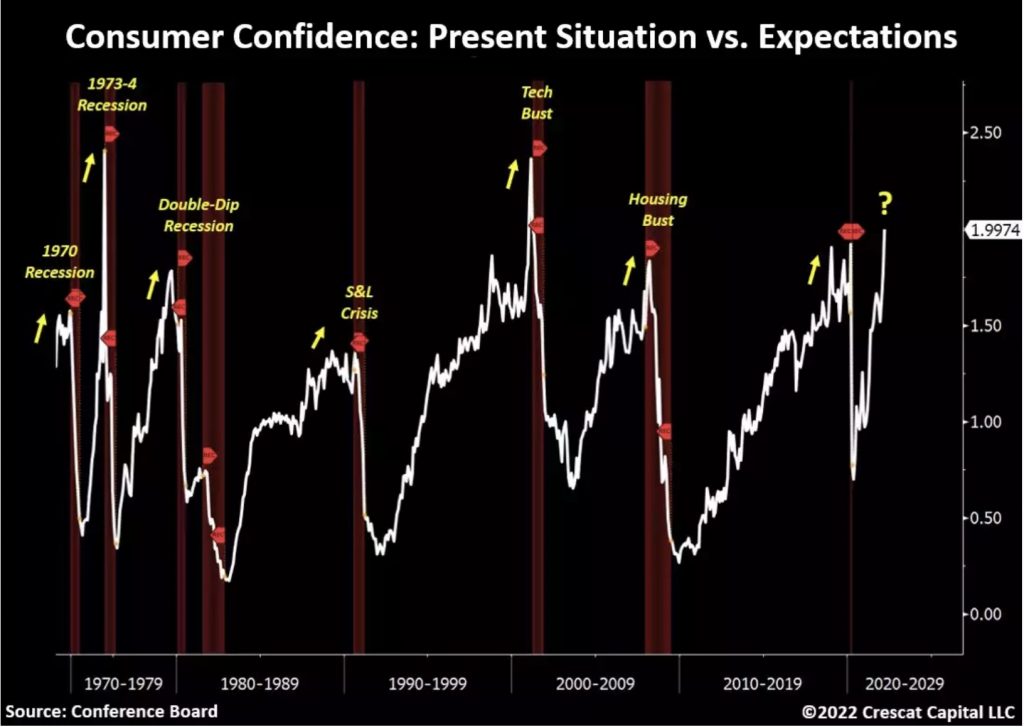 Tech Bubble 2.0
This could be just a coincidence, but the S&P 500 technology sector is almost as overvalued relative to the overall market as it was at the peak of the tech bubble. Note that the ratio perfectly re-tested the same level we saw in March 2000 right before technology companies suffered from a severe bear market in the next two years. We think this sector is unlikely to be the next sector to lead equity markets and these companies are at major risk of being re-rated at significantly lower prices relative to their fundamentals. 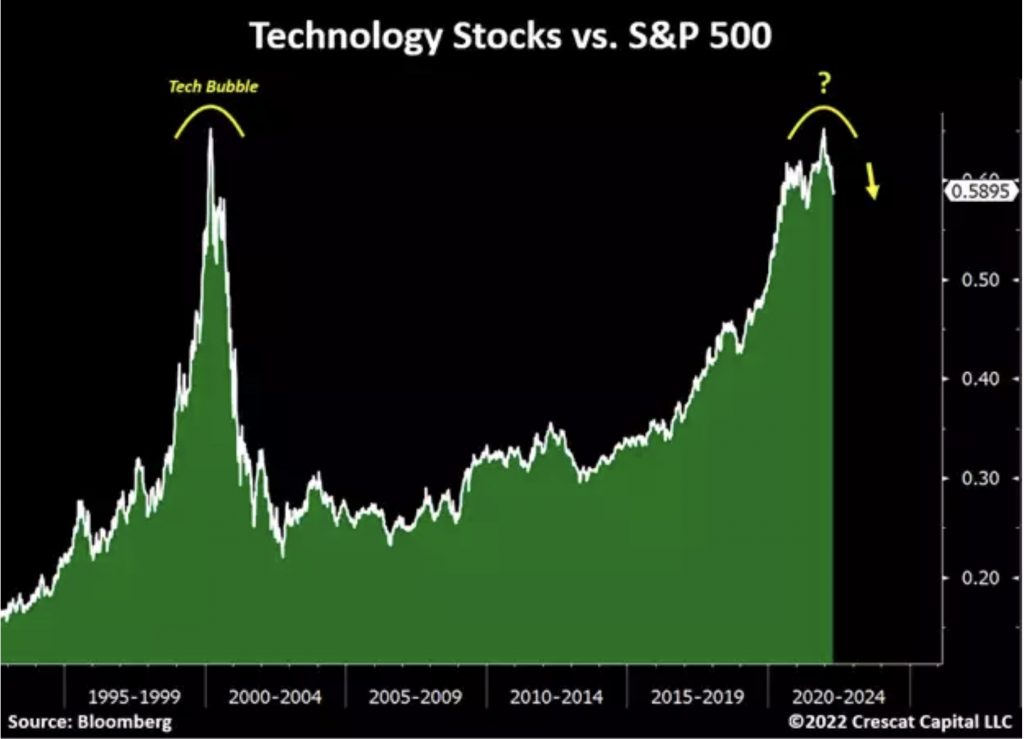 Insanely Speculative
Easy-money policies and excess liquidity have created one of the worst asset valuation distortions in history. Almost every fundamental multiple that we track is currently at historically expensive levels. To put into perspective, US market cap to GDP needs to fall another 15% just to reach peak Tech Bubble levels.

US Market Cap vs GDP Highest Still Above
The Peak Of The Tech Bubble! 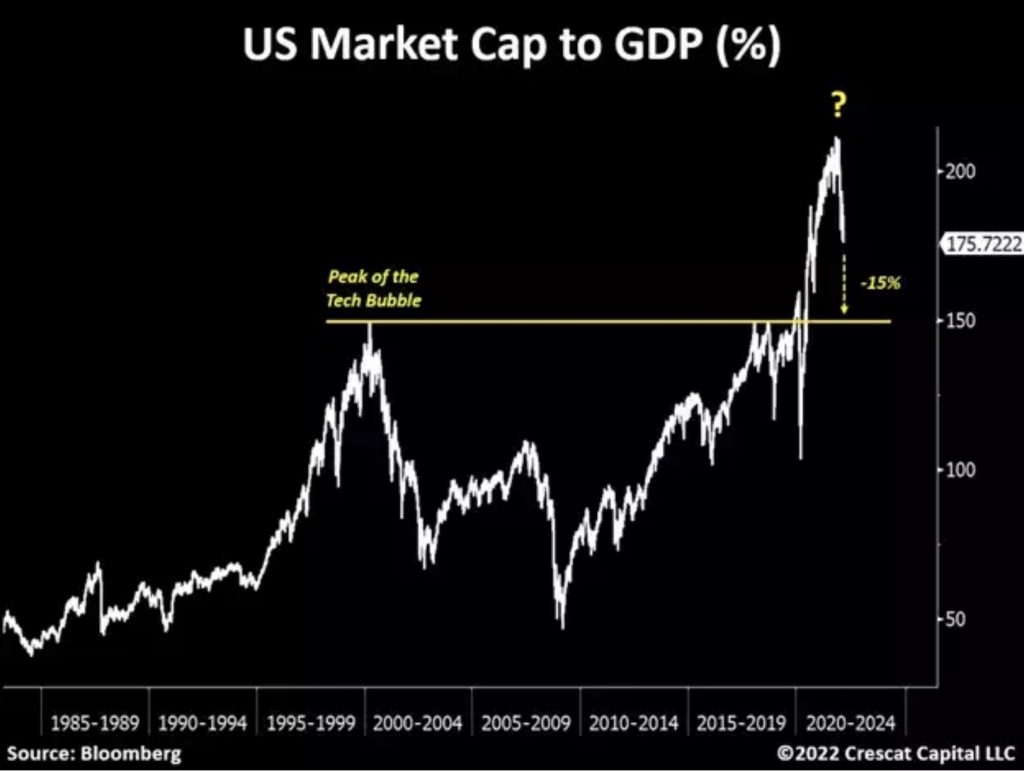 FADE THE PULLBACK IN GOLD:
Time To Buy Mining Stocks And Sell S&P 500! 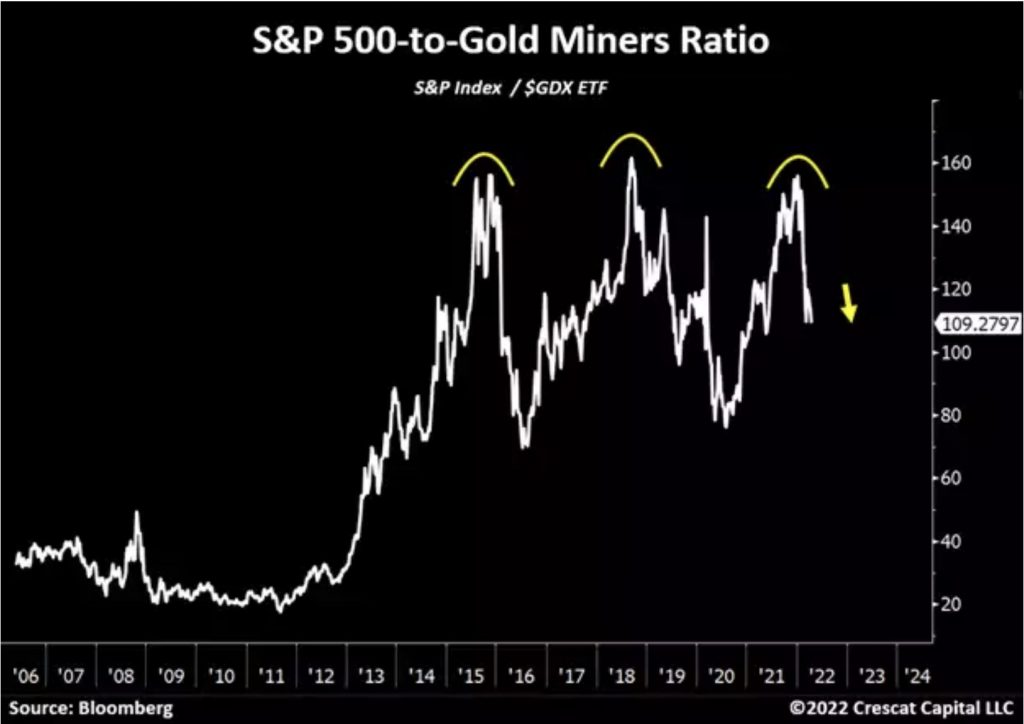 A Final Note on Gold
We have been in a de facto Bretton Woods system for the last several decades with many parallels today to the 1968 to 1971 period. Like then, there is a good chance we are about to move away from a system of Western central bank cooperation. The need to deleverage debt-to-GDP globally with fiat currency devaluation is being met with a serious structural global commodity supply shortage.

Western central bank coordination has kept gold suppressed versus dollars, euros, yen, etc. It has also created historic debt-to-GDP levels in these countries creating tremendous pressure on the system.  Here is the best macro academic paper on the Collapse of the London Gold Pool and end of Bretton Woods: https://economics.ucdavis.edu/events/papers/copy2_of_417Bordo.pdf. It is a must-read because it discusses the bigger issues surrounding “central bank cooperation”.

We need to remember that it was inflation, not deflation as posited by the Triffin dilemma, that led to the breakdown of the Bretton Woods system. We face the same problem today. Due to an unsustainable set of macro extremes, inflation has become unhinged and will likely only continue to spiral. Many will be slow to abandon their belief that too much debt in the world means we will necessarily face deflation. At this juncture, we think people will be better served by coming to the realization that inflation is the ultimate path of least resistance to deleveraging debt to GDP.

With France having repatriated its gold from the UK recently, it echoes De Gaulle breaking from the London Gold Pool in 1968. Even with the writing on the wall at that time, it was not until 1971 that the dam broke. Forward thinking investors today likely still have time to get ahead of the curve, but who knows exactly how much time?

Soon enough, individual investors, institutions, and central banks themselves will be breaking from the Western sovereign debt and fiat cabal and grabbing for the gold. At Crescat, we have always referred to the inherent problem with central bank cooperation as a “prisoner’s dilemma”, a game theory problem that ensures the ultimate breakdown of the entire system. It has taken a long time to get here, but we believe we are finally on the precipice.

Contrary to much gold conspiracy thought, it does not mean that we are facing the demise of the Western banking system nor the rise of authoritarian economies and their fiat currencies. It doesn’t necessarily mean the rise of non-government backed intangible currencies either. Governments will maintain legal authority and power over currency systems. Individuals and businesses will use those currencies. The strongest fiat currencies are likely to continue to be those in advanced economies where the principles of liberty, justice, democracy, entrepreneurship, and free markets reign.

The macro setup today portends a deleveraging of the global economy through inflation, including a probable step-function devaluation of all fiat currency systems relative to gold, a persistent phenomenon throughout world history.

Andrew Maguire – This Will Send The Price Of Gold Hurtling Into The $1,400s